Read The Sword of Fate Online

The Sword of Fate 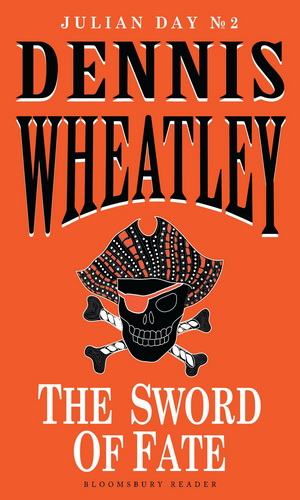 In the battle-scarred days of 1940 Julian Day finds himself in Alexandria – in a whirlpool of intrigue and spy-rings. He falls under suspicion both from his fellow countrymen and the Germans. Driven by conflicting loyalties, he sets sail for Greece and the ill-starred campaign of 1941, and, determined to sheath the Sword of Fate, he journeys into the heart of enemy-held territory. The danger is desperate; the price of failure – death.

THE SWORD OF FATE
Dennis Wheatley

My good friend of many years’
standing, who advised me wisely
upon many things and who sug-
gested the main theme of this
book

Dennis Wheatley was my grandfather. He only had one child, my father Anthony, from his first marriage to Nancy Robinson. Nancy was the youngest in a large family of ten Robinson children and she had a wonderful zest for life and a gaiety about her that I much admired as a boy brought up in the dull Seventies. Thinking about it now, I suspect that I was drawn to a young Ginny Hewett, a similarly bubbly character, and now my wife of 27 years, because she resembled Nancy in many ways.

As grandparents, Dennis and Nancy were very different. Nancy’s visits would fill the house with laughter and mischievous gossip, while Dennis and his second wife Joan would descend like minor royalty, all children expected to behave. Each held court in their own way but Dennis was the famous one with the famous friends and the famous stories.

There is something of the fantasist in every storyteller, and most novelists writing thrillers see themselves in their heroes. However, only a handful can claim to have been involved in actual daring-do. Dennis saw action both at the Front, in the First World War, and behind a desk in the Second. His involvement informed his writing and his stories, even those based on historical events, held a notable veracity that only the life-experienced novelist can obtain. I think it was this element that added the important plausibility to his writing. This appealed to his legions of readers who were in that middle ground of fiction, not looking for pure fantasy nor dry fact, but something exciting, extraordinary, possible and even probable.

There were three key characters that Dennis created over the years: The Duc de Richleau, Gregory Sallust and Roger Brook. The first de Richleau stories were set in the years between the wars, when Dennis had started writing. Many of the Sallust stories were written in the early days of the Second World War, shortly before Dennis joined the Joint Planning Staff in Whitehall, and Brook was cast in the time of the French Revolution, a period that particularly fascinated him.

He is probably always going to be associated with Black Magic first and foremost, and it’s true that he plugged it hard because sales were always good for those books. However, it’s important to remember that he only wrote eleven Black Magic novels out of more than sixty bestsellers, and readers were just as keen on his other stories. In fact, invariably when I meet people who ask if there is any connection, they tell me that they read ‘all his books’.

Dennis had a full and eventful life, even by the standards of the era he grew up in. He was expelled from Dulwich College and sent to a floating navel run school, HMS Worcester. The conditions on this extraordinary ship were Dickensian. He survived it, and briefly enjoyed London at the pinnacle of the Empire before war was declared and the fun ended. That sort of fun would never be seen again.

He went into business after the First World War, succeeded and failed, and stumbled into writing. It proved to be his calling. Immediate success opened up the opportunity to read and travel, fueling yet more stories and thrilling his growing band of followers.

He had an extraordinary World War II, being one of the first people to be recruited into the select team which dreamed up the deception plans to cover some of the major events of the war such as Operation Torch, Operation Mincemeat and the D-Day landings. Here he became familiar with not only the people at the very top of the war effort, but also a young Commander Ian Fleming, who was later to write the James Bond novels. There are indeed those who have suggested that Gregory Sallust was one of James Bond’s precursors.

The aftermath of the war saw Dennis grow in stature and fame. He settled in his beautiful Georgian house in Lymington surrounded by beautiful things. He knew how to live well, perhaps without regard for his health. He hated exercise, smoked, drank and wrote. Today he would have been bullied by wife and children and friends into giving up these habits and changing his lifestyle, but I’m not sure he would have given in. Maybe like me, he would simply find a quiet place.

Chapter I
An Englishman in Exile

After all those hours of desperate seeking, after all those days of heart-breaking disappointment and nights of tortured longing, I had found her. Daphnis was lying there, sound asleep on a pile of rugs in a corner of the cellar. All my grim forebodings had been baseless, she was alive and well. Not a hair of her lovely head had been harmed. The light of an old beaten copper oil-lamp, which stood upon a rough table, was enough to show the tender, healthy flush of her cheeks and the gentle rise and fall of the coverings under which she lay.

The cellar was fairly large and had evidently been used as a storeroom. From the ceiling there hung a number of fat, homemade sausages, which bulged in places to the thickness of the muscle in a boxer’s arm, and near them dangled some big bunches of dried herbs. One corner of the room was piled high with logs; in another there were some earthenware crocks and a child’s rocking-horse, carved out of wood and hand-painted which, from its battered state, looked as though it had served the children of several generations in some peasant family. The third corner had evidently been cleared to make room for the pile of goat-skins upon which Daphnis was sleeping, and the fourth was occupied by the old worn stone stairway upon which I was standing. It was the only entrance to the cellar and the only light in daytime evidently came from a grille which was set high up, in a shaft cut in the thick stone wall. There was no heating and it was very cold.

I tiptoed down the stairs and across the room. A thick soft wrap of white angora wool was drawn up below Daphnis’ chin. It was early yet and she was in the first deep sleep of night. An empty glass stood on the floor near the head of her rough couch. It had a faint white film in it, showing that it had contained milk, and the slightly sour smell mingled with the pungent spicy odour of the herbs and sausages.

The relief I felt at having found her now submerged all thought of time and place and danger. I knelt down beside her. At first it was difficult to realise that I was actually gazing once again at that dear familiar face, with the short straight nose and the little birthmark on the upper lip which had always played such
havoc with my senses. In these last weeks I had dreamed of them so often, only to wake to bitter disillusion, but the dark lashes which curled upon her cheeks and the firm, full-lipped mouth were real. I knew that time was precious, yet I wanted to prolong that unique moment of utter relief and happiness before I woke her and we began to plan how we might get away through the battle zone to the safety of the Allied lines.

I had few fears about getting her back through the battle zone. There must be many goat-tracks over the mountains as yet unguarded by the Germans, which we could take to if I had to abandon my car, and we could count upon the Greek peasants to aid us. Although it was most unlikely that anyone would discover until the morning that she had escaped and we had the whole night in front of us, the important information that she must have obtained while at the German G.H.Q. demanded that we should put as great a distance as possible between Ventsa and ourselves before dawn.

Shadow of Suspicion (Haunted by the Past) by Rose-West, Danielle
Born in a Burial Gown by Mike Craven
Crown of Dragonfire by Daniel Arenson
Exposed by Suzanne Ferrell
Grin by Keane, Stuart
By the Book by Pamela Paul
Return of the Ascendant (The Ascendant Series) by Thomas, Raine
Once minutos by Paulo Coelho
Death by Deep Dish Pie by Sharon Short
The Curse of Salamander Street by G.P. Taylor