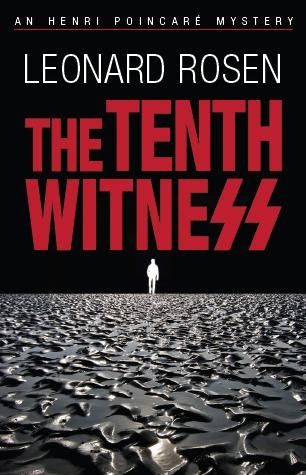 The Tenth Witness
is the second novel in the Henri Poincaré series, the award-winning
All Cry Chaos
preceding.

R
ECOGNITION FOR
All Cry Chaos

FROM
R
EVIEWS OF
All Cry Chaos

“A startling novel. This is a thoughtful, beautifully written puzzle.”
—Booklist

“It’s a rare pleasure to find a protagonist who reads like a literary figure in a thriller.” —
ForeWord Magazine

“Beautifully well-written, with fully-developed characters, high-octane tension, elegant mathematical constructs, and human hearts that are both noble and black as the night. This is one of the best thrillers I have ever read.” —
Daily Herald
(Provo, Utah)

“Easily one of the best first novels of the past couple of years.”
—Mystery Scene

All rights reserved. No part of this publication, or parts thereof, may be reproduced in any form, except for the inclusion of brief quotes in a review, without the written permission of the publisher.

This is a work of fiction. All of the characters and events portrayed in this book are products of the author’s imagination or are used fictitiously.

E
very Christmas, for thirty years, my friend and former business partner sends me a basket of pears. With each delivery comes a note and the same unspoken question, posed in a teasing, left-leaning script: “Say the word, Henri. Your desk is waiting. Best, A. C.”

I’m flattered to think Alec would have me back after all this time. For most of my career I could have used the money, and I could have done without the long stretches away from home and the violence and anxiety that attend police work. But I never was much of a businessman. During those first years, I turned down jobs that offended me. I took on clients who could barely make their rent, let alone pay us. Alec and I argued. In the end I’m convinced our venture would have collapsed due to what he rightly called my aggressive naïveté.

Once he suggested I quit business to join the priesthood. I might have, had I believed in God at the time. Now that I do, I’m too old—which is fortunate because these days I know how damaged we are and think it deluded, even dangerous, to hold to my former Sunday school view of the world. I would have made a bad priest, too.

Still, it worked out, my leaving Poincaré & Chin Consulting Engineers for Interpol. I got out in time to keep both a dear friend and the illusion that Alec and I could have prospered together. Better still, each December I sit with Claire at our farmer’s table to enjoy good fruit out of season. It’s a miracle of the modern age, eating an Anjou pear in December. I take one bite and there I go: off to an orchard in the shadow of the Andes, where these little jewels are grown.

It’s Christmas Eve and my grandsons are asleep, finally. Claire dozes by the fire. Moments ago, she stirred and said, “Love, come to bed.” We kissed and I laid a quilt across her lap. She drifted off again.

Outside, a thin crust of snow blankets the vineyards. With Alec’s note before me, I’ll consider once more his question in good faith. Which is to say, I’ll review the events of that summer and ask: Did I choose well? Have I chosen well since? I must answer in all honesty. And if the answer is
no,
I will write my friend and ask him to dust off my chair.

He would do it, too.

I begin, therefore, as I have for thirty years: with the body of a man floating face down in the slack water of Terschelling Island. I can see him fighting the flood tide that runs off the North Sea. That tide is a relentless, galloping thing. The man knows it’s coming and he can’t outrun it. The water rises to his waist, his neck, his lips. Surely, he accepts his death. Why, then, the struggle? He swims until he can’t, then sinks. His eyes bulge, the neck muscles strain, and here it comes: his first submerged breath. The brine freezes his larynx. His trachea collapses to protect his lungs. He’s alive, yet. Starved for oxygen, his brain forces a second breath. More, but weaker, laryngospasms. Water leaks into his lungs. By the fifth cycle it’s over.

And the world is well rid of him.

I
n June 1977, Lloyd’s of London, the insurer, issued a request for proposals to design and operate a floating dive platform in the North Sea. Its aim: to recover lost treasure from HMS
Lutine,
the storied frigate that sank in a gale off the Dutch coast with a thousand bars of gold. Lloyd’s took ownership of the wreck when it paid on the insurance claim in 1799. A hundred eighty years later, new technologies like side scan sonar gave the directors confidence that this salvage would fare better than earlier ones. Curiously, though the ship sank in only six meters of water, not more than a tenth of the gold, valued in 1977 at £10,750,000, had been recovered.

Longing to get out from behind our desks, Alec and I underbid the job and won the contract. We were young but respected, two newly minted engineers ecstatic to find work out of doors, on a treasure hunt no less.

We ended up retrofitting an old coal barge in Rotterdam and, in late May 1978, hauled it into position over the
Lutine
where it would float for the summer season. The workload had been crushing. On the day before the salvage began, our first real day off in months, I tried shaking Alec loose from his desk to go hiking with me onto the bed of the Wadden Sea.

The Wadden sits between the Dutch mainland and several barrier islands, one of which is Terschelling, nearest our platform. Twice a day at low tide, the Wadden empties into the North Sea and leaves behind a vast muddy flat, indeed the largest tidal flat in the world. Crossing the seabed from the mainland to any of the islands is something of a Dutch national sport. Thousands undertake the trek each summer, often families ranging from grandpa to grandchild, and I wanted to join them.

“At low tide there’s no danger,” I told Alec, “not if you go with one of the registered guides. They use walkie-talkies, ship-to-shore radios. They’ve even got a helicopter on call. It’s absolutely safe.”

He crossed his arms.

“It’s a walk,” I continued. “Mud, maybe some knee-high water here and there. And then, after five or six hours, we’ll reach Terschelling.” I handed him a brochure with photos of dunes and wide, white beaches. I described the starter hike I’d taken the day before, but still he showed no interest.

We were standing in our temporary office, a fourth-floor attic in Harlingen on the Dutch mainland. The town felt more like a sixteenth-century fishing village than a modern shipping hub. There were masts in the harbor, steep tiled roofs, and working windmills.

Our lone window was crusty as a cataract, and I could just make out a group gathered along the wharf and our guide. She was tall, holding a pole longer than a walking stick, shorter than a fishing rod, the better to save “the weak and lame” as she’d put it the day before on my starter hike. That had gone well enough to invite her for lunch and a stroll through town; and that had gone well enough for me to sign up for a second, more strenuous hike.

I grinned. “Here’s my last, best offer: I’ll buy you one of those inflatable tubes—the ones that go around your waist, with a duck on the front. You’ll hit the flats looking like a Viking ship.”

“Five forty-five, Henri. The launch leaves the dock a half-hour before.”

B
y the time I climbed from the mud flats onto dry land, I looked and felt like a creature emerging from the primordial ooze. Exhausted, mud-spattered and, after a misstep in a tidal channel, half drowned, I sat heavily into a chair in a café by Terschelling harbor.

Liesel Kraus, my guide, approached from behind and clapped me on the shoulder. “I rescued you. On the Wadden Sea, that means you buy the beer.” Without waiting for an invitation, she sat opposite me, called the waitress by name, and held up two fingers. “So,” she said. “You’re alive. Congratulations.”

I made a show of checking my head to see if it was still attached.

“You said it would be a
challenge,
not a death march.”

I was wet and cold, trending toward miserable. My plan was to pay for the beer, drink quickly, and find a shower and a bed where I could be left alone to sleep or die, whichever came first.

Liesel had earned that beer by shepherding a dozen tourists through to Terschelling with the efficiency of a border collie. Out on the flats she was all business. If she talked with one hiker, she’d keep an eye on the others. Every few minutes, she’d scan the horizon or check her maps and compass. She maintained regular radio contact with a lighthouse keeper. She was focused, skilled, and smart. She was also long-limbed with auburn hair.

I found myself staring.

I paid with a sopping ten guilder note, making a little show of squeezing water from it. Liesel and the waitress laughed, and I offered a toast: “To my Moses of the mud flats. Cheers!” This time when she laughed, I saw a woman transformed. With no one to save any longer, a beer in hand, and a young man—me!—for company, she blossomed.

“If I’m Moses, then Terschelling is the Promised Land. I doubt it.”

“Hold that thought,” I said.

I rummaged through my pack for a camera, the one object I’d secured in a proper waterproof sack, and mumbled something about my children needing to know who saved me. I propped an elbow on the table and framed the shot. I was losing myself in the fine, bright weather and in my new companion.

We were all but strangers, Liesel Kraus and I, yet she settled her dark eyes on mine and searched the lens as if we’d long been intimate. Without the Minolta between us, I doubt we could have held the moment. A breeze lifted a strand of hair. It fluttered across her cheek. I waited, then clicked.

“Tell me,” she said. “Yesterday, you mentioned you work on the
Lutine.
It’s been lost forever, you know. The shoals out there form, disappear, form again. These are treacherous waters. How did you find it?”

Secret Isaac by Jerome Charyn
From Boss to Bridegroom by Victoria Pade
All the Time in the World by E. L. Doctorow
Her Last Scream by Kerley, J. A.
The Longest Yard Sale by Sherry Harris
Other People's Children by Joanna Trollope
First Time Secrets (Vol. 1 – Study Break) by Mason Lee
Quid Pro Quo by Rivera, Roxie
Vacation Hell: Princess of Hell #4 by Eve Langlais
The Ghost Who Loved Diamonds by Bobbi Holmes