The Tortoise and the Dare (2 page)

“The Olympic Games start next week and our head teacher, Master Sophos, said we can have our own school Olympics tomorrow. There will be all sorts of prizes and it’ll be more exciting than the real games.” 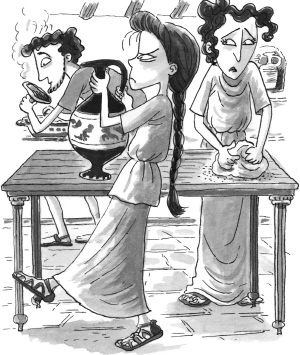 “The boys have already started talking about who will win. We’re doing the same events as the grownups. There’s the foot race – 200 paces – then the double foot race – 400 paces. We’ll have the standing long jump, quoit throwing and javelin!” “I think I could win the foot race,” he babbled. “I’ll practise after dinner. What are we having for dinner, Mother? Cheese and milk?”

“Bread and water,” she sighed.

“I love cheese and milk!” 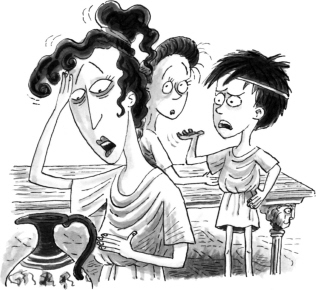 “Bread and water,” I said, louder.

“Where will we get it from?” I snapped.

Cypselis laughed. “Why, from Nan the goat of course.”

Father shook his head. “They came and took Nan away from us.”

“The priests from the temple. They always have a feast when the games start. They will sacrifice 20 goats to Pelops. They took Nan to sacrifice.” 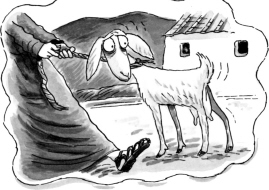 “Then what will I eat?” Cypselis wailed.

That’s when I lost my temper. “Oh, never mind about poor Nan – who’s nearly as old as us. Never mind how Mother and Father will get through the winter. Never mind how we’ll find the money for another goat. All you can think about is your own stomach!”

“You deserve to be sacrificed like Pelops
*
!” I raged. “Maybe I can win us a goat if I win the race,” he said quietly.

I stopped shouting and listened. “A goat is the prize?”

“Not exactly … I had a dare with Big Bacchiad in my class. He said he will give me a goat if I can beat him.”

I frowned. “And what will you give him if
he
beats
you
?” I asked.

He looked up with a smile as weak as water. “I said he could have you to be his slave, Ellie. I’m sorry! Mother, don’t let her hit me! Mother! Ouch!”

*
As you know, Pelops was the grandson of Zeus. When he was a boy, his father cut him into pieces, stewed his flesh in a pot, and served him as a feast for the gods.

I know you think I will say I lost my temper again.

I felt sick with fear at what Cypselis had done. When two men make a bargain, then it must be kept. A dare between two boys is just as strong.

Cypselis had bet me against a goat. If he lost the race I would be given away as a slave. There was nothing I could do to stop it now. In Greece, a woman is worthless. A girl is less than worthless
*
.

Our mother groaned. “Cypselis! Ellie is your twin sister. You shouldn’t have risked her like that.” “But I’ll
win
,” my brother said bravely. “This time tomorrow, we’ll have a new goat!”

I knew how fast my brother was. We used to race by the river every day when we were young – before Cypselis started school.

He was fast. But I was faster.

We set off across the fields and as fast as he ran, I was still quicker. We climbed a small hill and I reached the top a few paces ahead of him. Did Jesus Rise From the Dead? by William Lane Craig
Cosmic Hotel by Russ Franklin
Vienna Blood by Frank Tallis
Deceived By the Others by Jess Haines
London Art Chase by Natalie Grant
Defy by Sara B. Larson
Locked by Parker Witter
Ice Rift by Ben Hammott
Judgement Day by Michael Spears
The Days of the King by Filip Florian