Read The Trouble with Temptation Online

The Trouble with Temptation 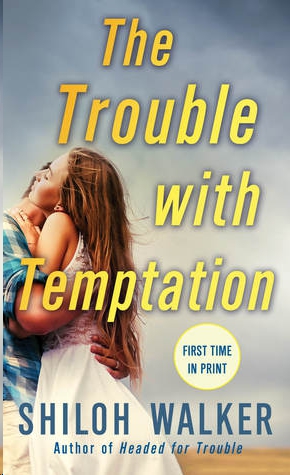 As always, to my family. You’re my world.

Thanks to Monique for believing in the story and thanks to Alex for putting up with my nuisance questions.

Brannon fought the terror as he sped down the road.

Moira’s words circled through his head over and over in an endless loop. His calm, cool, collected older sister had spoken in a shaking voice and he could hear the panic that had underscored her voice.

Moira was
never
afraid. But she’d been petrified.

William was here. He’s dead. I think. Neve killed him
.

His hands shook and he tightened them on the wheel.

If William Clyde
wasn’t
dead, then Brannon would rectify that.

He’d touched his sisters. The son of a bitch would die for it.

Breathing through his teeth, fighting the urge to pound something, he flicked a look at the clock.

When he looked up, he swore long and loud, slamming on the brakes with a force that all but shoved the pedal through the floor of the car.

Joe Fletcher stumbled toward him.

Nothing else could have gotten through to him. Nothing but that single name. The words penetrated the fog of rage and fear and his aggravation stuttered, veered immediately into a whole new kind of terror.

Hannah. The woman he wanted more than he’d ever wanted anything—the woman he’d walked away from only hours before.
His
Hannah?

Throwing open the door, Brannon went to haul Joe back to his feet.

“Where’s Hannah?” Brannon demanded in between spasms. Joe swayed and then lifted his head.

Something in his voice cut through and Joe raised a hand, waved toward the trees on the right side of the road. “She wrecked. I ran off the road and was walking … she … she almost hit me and crashed.”

Brannon dropped Fletcher and turned, staring at the broken and busted greenery on the side of the road.

The red car was buried in it, all but lost in the kudzu and grass.

He started to breathe once more as he jogged over. Shayla. That was Shayla Hardee’s car.

Okay, it was a bad wreck and as much as Shayla annoyed him, he hated to think of her being hurt. But it wasn’t Hannah—

Brannon’s world screeched to a grinding halt as his gaze landed on the blooming red of blood that dripped down her still, lifeless face.

Chief Gideon Marshall stood in the waiting room of the small county ER.

Small though it might be, the emergency department was state of the art. Gideon suspected there was a plaque somewhere with the McKay family name imprinted on it.

One of the women he loved was tucked away in one of the exam beds, with Ian Campbell at her side.

The other—the one who owned his heart—Moira, sat on a chair a few feet away, her hands clenched into tight little fists while she stared stonily ahead.

He wanted to go to her.

“Dead,” he said quietly after the deputy on the other end of the phone finished up a quick oral report. “You’re telling me you found Shayla Hardee dead.”

“Yeah.” There was a pause and then Deputy Clayton Hodges said, “Hannah Parker was in Shayla’s car when she wrecked. We … look, chief, we don’t know if she was trying to get help or what, but she was driving Shayla’s car and our witness said she was driving like a bat out of hell, too. I know Hannah runs out on the path by the river a lot. We’re…” He hesitated and then continued. “We’re thinking she saw something, maybe whoever hurt Shayla, and she was running away or found Shayla’s keys or something. We don’t have an official time of death, but Shayla’s been dead a couple of hours. Dispatch had a call at approximately ten thirty-eight. The connection was touch and go, but the call-taker says she thought it was Hannah. Hannah said something about somebody being dead.”

“The sheriff is sending in someone to question her—”

“No point,” Gideon said gruffly. “She’s…” He closed his eyes and forced himself to steady out before he said it. “Hannah’s in a coma. Doctors aren’t sure if she’ll wake up at this point or not.”

The other man came out of his seat, staring at Gideon with bulldog stubbornness in his eyes.

He ended the call without waiting for a response.

Eyes on Gideon, he tucked his phone away. “Officer—”

Okay, so much for hoping to remind him to stay focused
. Although Gideon couldn’t blame him.

Gideon supposed it was just as much to convince himself as anything else. Moving closer, he caught the other man’s shoulder and squeezed. “Okay, then. Okay.”

The two men turned as one to look at the doctor, standing in the doorway of the waiting room, one hand on the wall. His face was grim, his eyes dark.

Griffin said nothing, but the way he tensed had Gideon squeeze his shoulder once more.

“She’s still alive,” Dr. Howard Briscoe reached up and tugged off his glasses, giving them a cursory wipe with a handkerchief he pulled from his pocket. He barely flicked a glance at Griffin, his gaze intent on Gideon.

The physician inclined his head and stepped back, holding up a badge to the electronic scanner near the door. It slid open with a hiss. “I think it’s best if we speak … privately.”

“Tests show swelling on the brain. Likely the cause of the coma. As she recovers…” Briscoe grimaced as he stood at the glass window, staring in at his patient. “It’s entirely likely she’ll wake up as the swelling goes down.”

“It’s not much of a
but
.” Briscoe nudged his glasses up his nose, an absent-minded gesture of a man who did the same thing a dozen times a day or more. Briscoe was a tall man, rail thin, his graying hair buzzed short. He was going bald, but he’d never been the vain type and didn’t attempt to camouflage his slowly receding hairline. His eyes were hazel and studious, and still as grim as they’d been earlier.

“What is it?” Gideon asked when Briscoe tucked his hands into his pockets and continued to contemplate the silent form of Hannah Parker.

“We did some tests. Standard tests for all female patients.”

He turned then, staring at Gideon, his gaze briefly flicking to Hannah’s cousin, Griffin was her only living relative and he’d authorized Gideon’s presence. Having a cop in the family made things easier sometimes.

The younger man looked on, eyes narrowed. He hadn’t figured it out yet.

“Aw, hell,” Gideon whispered. Turning away, he rubbed his hands up and down his face.

“Now wait a minute,” Griffin broke in, his voice rough. “Are you telling me…” His gaze tripped over to his cousin, slid to her belly. There was no so sign of the baby growing there.

Gideon wasn’t surprised. He had suspected something was going on with … well, he was assuming. He was pretty damn sure he was right, too, not that he had evidence—so to speak.

Knowing Hannah was involved explained even more. But this was pretty damn recent—had to be.

Briscoe neither confirmed nor denied. After a moment, he said, “I’ve heard what happened—or what the police think happened. I know Shayla Hardee was murdered, that Hannah was in the area—or supposedly in the area. Is there…”

When he didn’t continue, Gideon turned to him. “Is there what?”

“What are you getting at, Doctor?”

Briscoe scratched his chin. “Hannah is a runner. I see her down at the path along the river all the time when I’m out on my own run. Anybody who knows her is likely to know she’d be out there running. What if
she
was the target and Shayla was in the wrong place at the wrong time?”

“Doing my job now for me, Doc?” Gideon scowled at the idea of what Briscoe was laying out. He didn’t like the idea. At all.

“I’m just explaining that there are … interesting circumstances,” Briscoe said, shrugging. “She’s pregnant. Involved in something unusual and she’s the only one who could shed light on what’s going on.”

He looked like a maniac, busting through the doors—and the truth of it was, if everybody in town wasn’t aware of who the wild-eyed man was, it was entirely possible that the sober-eyed uniformed officer would have been moving toward him with a weapon in hand.

As it was, Officer Griffin Parker caught sight of Brannon McKay and curled his lip.

He’d just wrapped his brain around the fact that his cousin was in a coma and then he got slammed with the
new
fact that she was pregnant and
now
he had to accept the possibility—slim as it was—that maybe
she
had been the victim all along.

The last thing he needed to deal with was this prick.

It was respect for his boss and his badge that kept him from turning away entirely.

But Chief Marshall had told him to keep an eye out for McKay and to be honest, Griffin had his doubts about whether or not the bastard would show up.

Looks like the chief called it again
. Griffin tried not to let his temper show as he cut McKay off. He didn’t want to be out here playing nice with some rich, entitled prick. He wanted to be back there with his cousin. But he was still on the clock and that meant the job came first.

Marshall had given him thirty minutes of personal time to sit with Hannah and get his head on straight, and by the time he came back out here, he had to admit—yes, maybe he could see why the doctor and Marshall were concerned. No, it
wasn’t
likely that Hannah had been the target, but yeah, everybody knew she was down at the park all the time running. Nobody ever saw Shayla down there. She was even known to say that she preferred to do her sweating
indoors
,
thank you very much, where there are showers to be had when it’s all done
. People could tell the day and time by when her damn red car was parked outside the gym—Mondays, Wednesdays, and Fridays from eight to ten and Thursdays from one to three.

Pirate Wars by Kai Meyer
Ruins by Dan Wells
The Ivy by Kunze, Lauren, Onur, Rina
True (. . . Sort Of) by Katherine Hannigan
Lord Love a Duke by Renee Reynolds
The Rats by James Herbert
Wolf's Holiday by Rebecca Royce
The Clockwork Universe by Edward Dolnick
The Importance of Being Seven by Alexander Mccall Smith
The Heart of Revenge by Richie Drenz