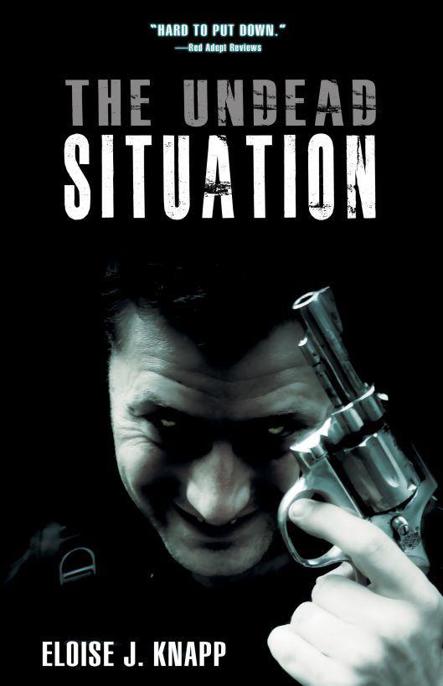 Published by Permuted Press at Smashwords.

All streets, cities, and roads are geographically accurate. Some liberties have been taken with the creation of various buildings and the aesthetics of certain locations.

Sam Landstrom, my uncle and author of
Metagame
, inspired me to finish my own novel after completing his.

I’d like to thank the earliest editors of
The Undead Situation
: Alanna Belak, Laura Landstrom, and Angela Berg.

When it did happen, everything about it was cinematic. I’m sure people banded together and tried to save themselves from their untimely dooms. They found solace in a mall, a house, or bunker, just like in the movies. Desperation and pessimism just prevented them from seeing the film-like qualities of their actions.

I was sitting in my apartment, alone, when it happened. Downstairs I could hear the banging of pots and pans as people fixed dinner. Their kids were whining, but that wasn’t anything unusual.

Outside the sky was plagued with deep grey clouds, rain pouring. I left the window open so I could hear the softness of it.

A train whistled across town. A cop car, sirens blaring, sped past the front of my apartment building. I listened to its sound fade away, again leaving me with the noises of my home and of rain.

It happened all at once, taking the entire world by storm. It happened so quickly, people didn’t believe it was true. Denial just made the undead count rise alarmingly fast. People who accepted it were considered crazy by those who didn’t. In the end, I bet everyone wished they’d seen a few more Romero movies, maybe been a little less close minded.

If I were to try and tell you exactly how the whole zombie thing spread, I’d probably have to make up some stuff. No one knew if it was a disease or infection, or why it also made you turn when you died from non-Z related injuries. Oh, experts—especially religious experts—had a jolly good time with their theories, but no one truly knew what was going on. So, as I sat alone in my apartment, the chaos-inducing news of the zombies finally spread to Seattle, Washington.

People died then they came back. They ate other people. It’s a cliché way of putting it, but it’s the absolute truth.

There was only one person I knew who would accept the news as quickly as me—my long time friend Francis. He called early on with the latest update on the situation outside.

“You’re supposed to quarantine anyone who’s been bit, did you know that?”

The apocalypse
was
now, and since Frank and I were alike we both accepted that without much thought. I wasn’t sure what Frank’s plan was, but I got out my box of old Guns & Ammo for entertainment, barricaded my apartment door, and cracked open a can of sweetened condensed milk for the ride. (I’ve got a sweet tooth. Sue me.)

With my canned goods obscene in calories and a top-story view of Seattle, I watched people die. I watched stuff blow up, stuff break, and the zombies gain numbers for their undead ranks.

My name is Cyrus V. Sinclair, and I didn’t care.

I wasn’t going to leave.

I was going to leave.

Only days after the outbreak started, downtown Seattle was in a state of chaos and disrepair. From my window I watched people from all walks of life, all shapes and sizes, and of all colors get eaten by their fellow man. Some people thought zombie movies were graphic, but nothing was as stunning as watching the action in real life.

Really, I suppose everyone’s intestines tasted the same. Discrimination wasn’t an issue once you were a zombie.

A fully loaded military grade pack waited by the front door. When I packed it, I had intentions to leave. That was when rumors of the dead rising started. Now the dead
had
risen and I was still sitting in my apartment, hesitant to make a decision. Just one decision. But instead of deciding, I was thinking about the world outside.

I decided we were all doomed for sure, and maybe that’s why I hadn’t stepped outside of my apartment in almost two weeks. Before, there was a chance of survival; the military was still trying to get control of things, the electricity was always on, and most people were still acting like…like people. But once the lights started flickering and occasionally went out, casting the whole city into complete suppressive darkness, I knew it would be just me, myself, and I ‘til the end of days. My ferret, Pickle, was my only companion who would accompany me for the apocalypse. For days we shared comfortable silence, eating gummy bears and ferret food, watching the mass destruction of mankind unfold before us.

The monotonous days were broken up by phone calls from Frank. My cell vibrated on the kitchen counter. He spoke before I could even say hello.

I didn’t have a TV, internet, or interaction with other people, so my personal opinion was limited. “Not too bad. The power’s still on, plumbing works mostly, and apparently I get reception.”

Frank huffed. “Well, I’ll
tell
you how bad it is. The coast is overrun. No ships coming in or out. A man going east told me he saw freighters ramming into shore. Goes without saying everyone is killing each other, living or dead. Damn government said they’re taking appropriate measures.”

It was surprising how fast civilization fell apart. One minute we were haughty Americans, the next we were as bad off as every other human being on planet Earth. Despite the government’s claims they could save everyone, or they were taking “appropriate measures,” people went berserk and the world went straight to Hell.

“Doesn’t matter what everyone else is doing. I’m fine here,” I said.

“You’re still in the apartment? How long are you planning on staying there?”

How was I supposed to know? One minute I was ready to walk out the door, and the next I was ready to hole up in the apartment forever. “I don’t plan on staying here. I’ve been thinking about leaving.”

“Well, lucky for you, you don’t have to think about it anymore. I’m coming to get you.”

I masked a gasp with a choke. Keeping my voice level, I asked, “What are you talking about? I thought you were still in Little Rock?”

Frank, in few words, explained that I couldn’t take care of myself worth a damn and he was going to pick me up. His parents, survivalists like Francis, left him a cabin in the mountains which he’d been working on for the past year. That meant Frank had been in Washington for a year without coming to see me. I felt a little hurt, but didn’t mention it.

“I’m not the same teenager who showed up on your doorstep, Frank. I can handle myself.”

The static of the phone almost masked it, but I heard him snort in disbelief. “Never said you were. So you’re saying no to the cabin?”

I knew I wasn’t thinking it through, but pride overtook me. Frank was an honorable man, and he was only looking out for me. But I couldn’t stand the idea of someone thinking I couldn’t take care of myself. I just couldn’t.

The cell made a horrific high pitched squeal before going silent. No automated voice explained the phenomenon.

That was the last time I used a phone.

A few days after talking to Frank, I regretted my decision. His intention was noble and I shot him down. Our conversation was probably our last, and I acted like a complete ass. My pack was still resting by the door, and I visualized it mocking me for saying no. Then the bag reminded me of how I met Francis. I was sobered by the thought.

In 1993, when I was 16, my grandparents and I had just moved to Little Rock, Arkansas. At that point I was ‘just too far gone.’ The epitome of a no-good punk. Unwanted, I packed my few belongings and ran away. I wasn’t smart and didn’t know the area, so I unintentionally hiked up into the Ozarks.

I found myself on the property of Francis Jackson Bordeaux with a shotgun pointed at me. Frank was a Vietnam veteran with a mean case of Post Traumatic Stress Disorder.

Long story short, I lived with him for about a year until I moved onto another chapter of my life. I learned a lot from Francis J. Bordeaux, almost everything that mattered.

I thought about Frank’s personality, how when I lived with him and I said no, he took no as yes every time. A part of me believed, despite my harsh refusal, he was still coming to get me.

He was
, I decided. There was no way he’d changed enough
not
to come get me. That was when my plan was set; I would turtle up in my apartment until Frank came. Until then, it was the same old routine. Watch outside, maintain inside.

Frank opened my eyes to how bad things were in the city. Instead of just looking, I analyzed the situation. The entire city was clearly on its way to complete destruction. Looters took advantage of the turmoil and broke into every shop they could. Even the windows of the children’s toy store across the street were shattered, dollies and teddy bears strewn everywhere.

Despite not leaving the apartment (or maybe because of it), my body was still fresh and lithe. I hadn’t spent a single day running away from animated corpses or fighting my way through hordes of the living trying to escape to a different fate. At twenty-seven, I was as spry as any teenager, maybe even more so. (Undoubtedly, my laidback personality had something to do with it.)

As I walked through my two-bedroom one-bath residence, I took mental note of its state. The kitchen and dining room were both sparsely furnished. Someone would think an inhabitant was nonexistent. The short hallway and bedrooms were stark, void of any personal expression. The only signs of human existence were empty canned goods on the kitchen counter, an H&K PSG-1 towering among the empty bags of candy in the dining room, and a scatter of Frank Sinatra records resting on the living room floor with the record player.

There were many places I’m sure I could have gone to get some goods. There was a convenience store down the street that offered all the candy I could eat. (One might wonder how it’s possible for me to live on sugar. The answer was this: I don’t.) My bedroom overflowed with MRE’s (Meals Ready to Eat), the flavorful choice of the U.S. military. Although their flavor wasn’t as delicious as a roll of Life-Savers, it kept me running.

Call me crazy, but I knew some kind of apocalypse would happen in my lifetime. I wasn’t necessarily preparing for the undead, but stocking up on MREs over time seemed like a good idea anyway. Stockpiling gun after gun since I was sixteen? Well, that was just a hobby.

After moseying into the eating area, checking what I did have left food-wise, I went back to the balcony to assess the corpse situation. The spring air was impregnated with the stench of rotting flesh, a scent not unbearably unpleasant, and within that the electric undertone of a lightning storm soon to come. The street had emptied. I guessed the dead had better luck indoors, where people might still be hiding, so they went hunting inside.