Read The War That Came Early: The Big Switch Online

The War That Came Early: The Big Switch 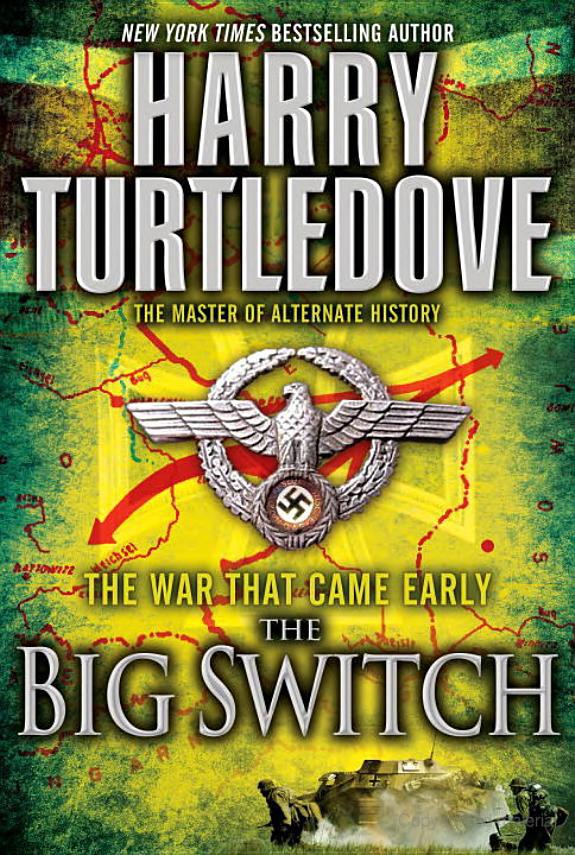 The Guns of the South

Worldwar: In the Balance

An Emperor for the Legion

The Legion of Videssos

Swords of the Legion

THE TIME OF TROUBLES SERIES

A World of Difference

The Great War: Walk in Hell

Settling Accounts: Drive to the East

Settling Accounts: In at the Death

Every Inch a King

The Man with the Iron Heart

THE WAR THAT CAME EARLY

The War that Came Early: West and East

The War that Came Early: The Big Switch

The War That Came Early: The Big Switch
is a work of fiction. All incidents and dialogue, and all characters with the exception of some well-known historical and public figures, are products of the author’s imagination and are not to be construed as real. Where real-life historical or public figures appear, the situations, incidents, and dialogues concerning those persons are entirely fictional and are not intended to depict actual events or to change the entirely fictional nature of the work. In all other respects, any resemblance to persons living or dead, is entirely coincidental.

aclav Jezek slogged up a dirt track in eastern France. Crusted snow crunched under the Czech corporal’s boots. Like anyone from central Europe thinking of France, he’d always imagined Paris blazing with lights and beaches on the Riviera packed with girls in skimpy bathing suits. Freezing his ass off in the middle of a war had never been in the cards.

But here he was, freezing his ass off. This would have been a nasty winter by Czech standards. From everything he could pick up—he spoke only foul fragments of French—it was a bloody godawful winter by French standards. Which didn’t do anybody stuck in it one damn bit of good.

And here he was, in the middle of a war. And it was his own fault, too. When the Nazis jumped on Czechoslovakia in October 1938, he’d fought till he couldn’t fight any more. Then he’d gone over the Polish border and let himself be interned. And
then
he’d agreed to join the forces of the Czech government-in-exile still fighting the Germans from its base in Paris.

A good thing, too
, he thought, lighting a Gitane without breaking
stride. He didn’t breathe out much more fog with the cigarette than he had without it. Poland and Hitler were on the same side these days, both fighting the Russians. If he’d stayed in that internment camp, he’d probably be a German POW now.

Of course, he might yet end up a German POW. It wasn’t as if the Nazis had gone out of business. They were playing defense in the west for the time being, not pushing toward Paris with everything they had. That was something. Things looked a lot better now than they had when Vaclav got to Paris. He could still get killed or maimed or captured if his number came up.

As if to underscore the point, German artillery grumbled off to the east. Shells screamed through the air. Vaclav cocked his head to one side, gauging their flight. This lot wouldn’t come down anywhere close to him, so he kept marching.

The rest of the Czechs in his outfit made the same automatic calculation and did the same thing. They wore a motley mixture of Czech and French khaki uniforms. Most of them kept their domed Czech helmets in place of the crested French model. Vaclav did—he was convinced the Czech pot was made from thicker steel. The German
Stahlhelm
was better yet, but wearing one of those wouldn’t do, not if he wanted to keep on breathing, anyway.

Most of the Czechs carried French rifles. That made sense. French quartermasters didn’t want to have to worry about somebody else’s ammunition.

Jezek, by contrast, listed to the right as he marched. The piece slung on his shoulder was longer and heavier than an ordinary foot slogger’s rifle. It was made for wrecking tanks and armored cars. The 13mm armor-piercing slugs it fired would punch through twenty-five millimeters of hardened steel. It kicked like a jackass, too, despite padded stock and muzzle brake, but everything came with a price.

It also made one hell of a sniping rifle. Those big bullets flew fast and flat. And when one hit a mere human being, it commonly killed. Vaclav had picked off Germans out to a kilometer and a half. And he’d picked off a German sniper specially sent out to get rid of him: a compliment he could have done without.

Those 105s in the distance rumbled again. Again, Jezek cocked his
head to one side. This time, he didn’t like what he heard. “Hit the dirt!” he yelled. He wasn’t the only one. The cry went up in Czech and French.

Even in his greatcoat, even with wool long johns, doing a belly flop into the snow wasn’t his idea of fun. And the goddamn antitank rifle thumped him when he landed. The stupid thing wasn’t content with bruising his shoulder every time he fired it. Oh, no. It wanted to leave black-and-blue marks all over him.

But snow and bruises weren’t so bad, not when you set them alongside of getting blasted into ground beef. Half a dozen shells came down not nearly far enough away from the Czech detachment. Fire at the heart of the burst, dirt and black smoke rising from it, fragments whining and screeching through the air … Vaclav had been through it more often than he cared to remember. It never got any easier.

Nobody was screaming his head off. That was good, to say nothing of lucky. They’d flattened out soon enough, and none of the shards of steel and brass decided to skim the ground and bite somebody regardless.

A couple of Czech soldiers started to get to their feet. “Stay down!” Sergeant Benjamin Halévy shouted from right behind Jezek. “They may not be done with us.”

Sure as hell, another volley came in half a minute later. One Czech swore and hissed like a viper, but only one. Bright red blood steamed in the snow under his leg. It didn’t look like a bad wound—but then, any wound you didn’t get yourself wasn’t so bad.

As the injured man bandaged around, Vaclav twisted around (trying his best to stay flat while he did it) and told the sergeant, “You may be a Jew, but at least you’re a smart Jew.”

“Fuck you, Jezek,” Halévy answered evenly. “If I’m so smart, what am I doing here?” He was redheaded and freckle-faced. He was a French noncom, not a Czech. His folks had brought him from Prague to Paris when he was little. Equally fluent in Czech and French, he served as a liaison between the government-in-exile’s troops and his host country’s army.

Before the war started, Vaclav hadn’t had much use for Jews. But, in Czechoslovakia and now here, he’d seen that you could count on them to fight the Nazis with everything they had. Anybody who’d do that was
all right in his book. Plenty of Slovaks had thrown down their rifles and hugged the first German they saw. Slovakia was “independent” these days, though the next time Father Tiso did anything Germany didn’t like would be the first.

Since Halévy
was
a smart Jew, Vaclav asked him, “What d’you think? Can we get up now, or will those shitheads try to be really cute and throw some more shit at us?”