Read The Warlords of Nin Online

The Warlords of Nin 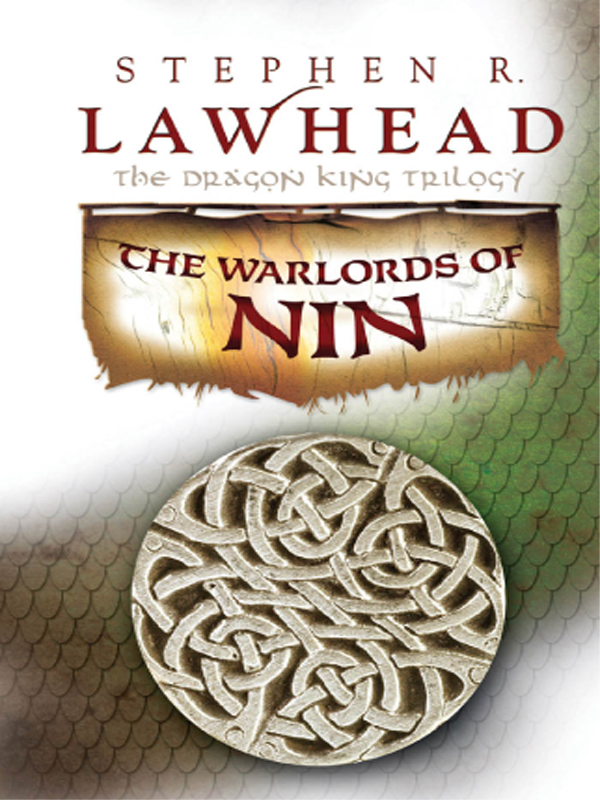 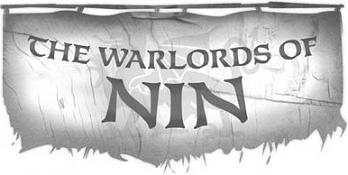 OTHER TITLES BY STEPHEN R. LAWHEAD

The Iron Lance
The Black Rood
The Mystic Rose

The Paradise War
The Silver Hand
The Endless Knot

Empyrion I: The Search for Fierra
Empyrion II: The Siege of Dome 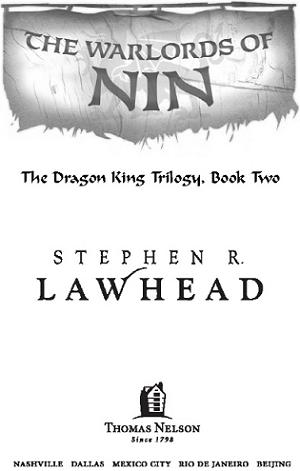 Thomas Nelson, Inc. books may be purchased in bulk for educational, business, fund-raising, or sales promotional use. For information, please e-mail [email protected]

For Drake, my shining one.
With all my love. 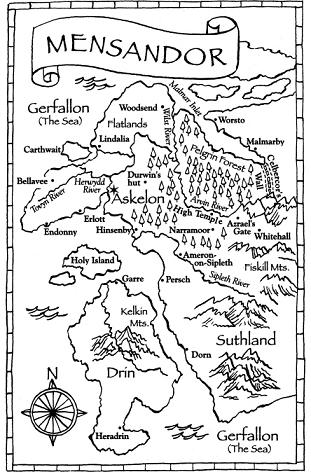 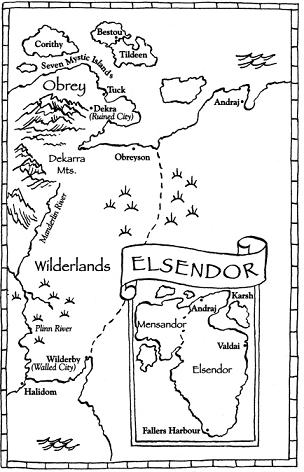 Q
uentin stood at the high parapet overlooking the tranquil forest. His eyes scanned the gently lifting hills clothed in their greens of early summer, all softened in the golden afternoon light by the gathering mists of evening. At his hand upon the cool stone balustrade a thin parchment roll fluttered in the easy breeze. At his feet lay a leather case from which he had drawn the scroll to read only moments before. The case bore the royal insignia he knew so well: the terrible, twisting red dragon of the Dragon King.

The warmth of the late-afternoon sun splashed full on his face, and yet Quentin felt a chill creeping through him. He sighed a heavy sigh and hung his head, shaking it slowly from side to side. Hearing a rustle behind him and the brushing tread of a soft foot on the stone, he turned to see Toli gliding up.

The tall young man settled himself easily on the edge of the parapet and crossed his arms over his chest. He regarded Quentin with a quizzical brown eye and then looked out over the forest, cocking his head to one side. “Listen,” he said,
after a moment. “It is the sound of a world at peace.”

Quentin listened and heard the faraway chirp of birds as they fluttered among the whirtle berries, the breeze nudging the leaves, voices murmuring in a courtyard somewhere below.

“They told me a rider from Askelon had arrived with a message for you. I thought to come and see if you needed anything.”

Quentin looked at his friend and smiled. “You mean curiosity moved you from your beloved stables. Yes, a message from the king.” He picked up the parchment and handed it to Toli, who began to read.

Presently Toli's head came up, and his eyes found Quentin's studying him. “This does not say what the trouble is.”

“No, but it is not a request for a friendly visit. There is some need behind it, and some urgency. If it were but a small thing, Eskevar would have waited. We're due to travel back to Askelon soon anyway . . .”

“And this recommends we leave right away. Yes, I see. But there is something else?” Toli's sharp eyes appraised Quentin, who stiffened and turned from their piercing gaze.

“What makes you say that?”

Toli laughed softly. “Only that I know my Kenta very well. You would not look so if you did not have a suspicion of what lay behind this innocent summons.”

“Innocent?” He fingered the leather case that he had stooped to retrieve. “Perhaps, but you are right, Toli; there is something else. I don't knowâit just came over me as I was reading.”

Toli watched Quentin closely and waited for him to continue.

“I'm afraid if we go to Askelon now, we will never come back to Dekra again.”

Quentin only shook his head.

“Well, then it may not be. Your feelings may only be a warning of what may come if we do not go at once.”

Quentin smiled again; this time a flicker of relief shone in his eyes. “Yes, perhaps you are right. As usual you have rescued me from myself.”

“We can leave tonight. It will be good to sleep on the trail again. We have not done that in a long time, you and I.”

“We shall, but not tonight. Have you forgotten that tonight we dine with Yeseph? If I am not mistaken, we have only enough time to prepare ourselves and go to his house. He will be waiting.

“We will leave at dawn instead,” said Quentin.

“So be it,” said Toli, inclining his head in a slight bow. “I will see to our preparations when we have supped with Yeseph and the elders.”

Quentin nodded and took the rolled parchment that Toli offered him, then slid it back into its case as they turned and walked back into Quentin's rooms.

Quentin dressed quickly, donning a fresh mantle and tunic, and pulling on fine leather boots. He met Toli at the door, and the two set off for Yeseph's lodgings.

Yeseph lived in a quarter of the ruined city near the library. As they walked along together, Quentin looked upon the home he had come to love. His eyes, long ago accustomed to the tumbled structures that still met his gaze on every side, seemed not to notice the destruction, but instead saw it all the way it had been in the time of the mighty Ariga.

In his mind he saw stones lifted back into place one upon another; arches reconstructed with their colorful tiles, and beautifully carved doors thrown wide in welcome; courtyards once again abloom with flowering plants; streets echoing laughter and song. He saw it all as he imagined it had been. Quentin always experienced the same magical sensation when he moved about the city. In the ten years he had lived in Dekra, he never lost the rapture it held for him, or the feeling that he belonged there, that Dekra was his home as was none other he would ever find.

“It will be once more,” said Toli as they moved along the quiet streets, over stones worn and smooth with time.

“What will be?” asked Quentin absently.

“This city. It will be again what it once was: the way you see it in your head.”

“I believe that it will. I want to believe it. Though it seems sometimes that the work goes so slowly. There is so much to be done. We could use more hands.”

“But look how much has been accomplished since we came here. And every year our numbers grow. Whist Orren blesses our efforts with his own.”

It was true. The work of restoring the ancient city and populating it with people who shared the dream of rebuilding it to its former glory, of studying the ways of the Ariga and their godâthat was going on at a fine pace. Much had been done in ten years. The work of a lifetime, however, still remained. And that was what pricked Quentin's impatience.

They met Quentin's stooped old teacher where he stood waiting for them at the gate of his courtyard. His face beamed when he saw the two young men striding up. “Hello! Hello, my friends!” cried Yeseph, running out to meet them. “I have been waiting for you. You are the first to arrive. I was hoping that would be the case. I wanted to talk to you both.”