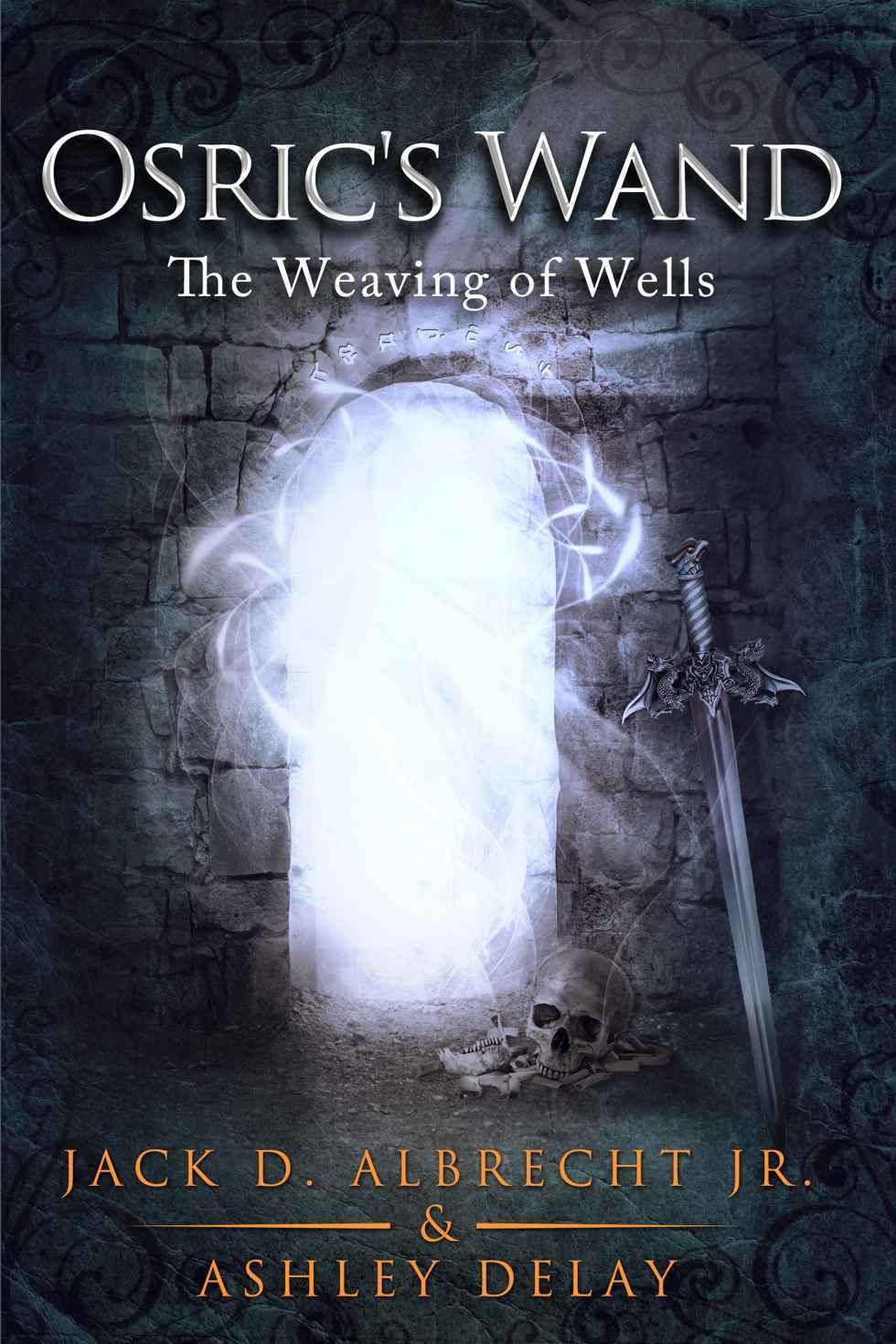 Chapter 18: The Other Seer

Chapter 29: A Vision of Death

“Shiny!” Pebble clapped his paws and looked up at Osric expectantly.

“Here you are, sir.” Osric looked up and saw a young man offering Legati to him. “We wanted to see her in your hands again, sir.” A small group had gathered around his friends, a hopeful cast to their faces.

Osric took the sword and laid it down across his lap and smiled. In a wave of clarity, every truth washed over him as he looked up into the expectant gazes of his closest friends. He thought of the agonizing hours they had all spent trying to decipher the prophecy that had clung to them through all of their adventures. The answer to it all had been so simple, yet the timing of their attempts to answer the questions had to have been off by the slimmest of margins. He couldn’t imagine how it had escaped their notice for so long.

Osric thought back to the power lock with Gus’s wand, as he lay pinned under the collapsed ceiling. Pebble had seen it then, but Osric had never thought to look. The words of the prophecy danced through his head.

The wand that is not a wand…
He thought about the hours he and Kenneth had spent mulling over those words while sparring to keep up their strength and skills on their journeys.
It will be wielded in practice by two…
How many times had they passed his wand around, each seeking something the others had missed, and each of them failing to find anything new in the simple stick and woven strands?
It will be known by one but not known…
Osric looked down at Pebble’s big, brown, innocent eyes and laughed until he thought he would pass out. The prairie dog pup was growing quickly, but he still resembled the ball of brown fluff that had always seen what no one else had. Pebble was bigger than Gus now, but Osric knew he was still the playful pup he had grown to love.

“Pebble,” Osric said with a sly expression as he recovered his breath.

“I think we all need to play a little game right now, don’t you?” A wide smile grew on Osric’s face. Gus looked over at them with a scowl. “Hey, Gus. I see something you don’t.” Osric stood up, sword in hand, and stepped forward. He was tall and lean, towering over the grumpy old prairie dog. Osric swept his sandy hair back from his forehead and looked down at Gus with confidence in his emerald green eyes.

“I don’t know why you would assume anyone would understand what you are saying,” Gus, Archana’s most famous Wand-Maker, hesitated in his reply. “But your body language suggests we should.”

Osric recognized the look on his face. It was a look he had worn himself on many occasions; the prairie dog’s pupils dilated and his nostrils flared slightly. His senses were responding to the Portentist gift indicating that something important had occurred, but Gus still didn’t understand the gift’s pull.

Osric looked into the eyes of those who had gathered around them. A crowd was growing around where they stood on the grass outside the Aranthian barracks. He could see the anticipation on their faces—they didn’t know what was going to happen, and indeed didn’t know if anything would, but collectively their minds were locked in anticipation of some unknown portent. Osric knew that there would be a great deal of satisfaction for each of them in what was about to be revealed.

Bridgett took in a startled gasp of air as Osric locked eyes with her. He could see her focus change from the hidden realm of wandcraft as she met his gaze with a smile. Her russet hair fell softly along her jawline and tumbled down her back, and the silver flecks that Osric could see in her blue eyes brought back the memory of the first time he had met her. She was wearing the same earthtone dress, but the sun had darkened her skin and worry had left subtle creases around her eyes. She was even more beautiful now than she had been then.

“Give me a moment. There is something I need to do before we continue this conversation.” Revitalized by recent events, Osric adjusted his grip on Legati’s hilt and moved as if he had not been injured and asleep for over a month. He fastened his scabbard to his waist and sheathed the sword.

Those gathered began to whisper silently as the few moments grew uncomfortable for the bystanders. They weren’t discomforted by the time it took him to prepare to sheath the sword, but by the intense lock that existed between Bridgett’s and Osric’s eyes, as well as the playful way Osric smiled while he moved.

“A day with many magical revelations shouldn’t start without experiencing magic of a different sort.” Osric stepped forward after the deep
thwonk
rose from the mouth of his scabbard as the sword slid into place. Grasping Bridgett’s hand, he spoke softly but with great intensity. “Thank you for saving me. I have missed you.”

Moving slowly, he planted a tender kiss on Bridgett’s forehead. Osric caressed her right cheek softly with his fingers while lifting her face to his. He kissed her with all of the passion that had been pent up inside from months of anxiety for her safety and from the distance between them. She melted into his embrace, blushing as he finally released her and she noticed all of the eyes watching them.

“Boy, I am sure you both needed that, but couldn’t it wait until after you explain why this Portentist gift is chiming like a bell tower?” Gus pleaded.

Machai grunted in a low laugh. A wide smile peeked through the dwarf’s thick mustache, and his wide shoulders shook with his laughter.

“No, Gus, you’ve got to give them that. Both of them have been through a lot in the last few months,” Macgowan spoke in their defense. His deep voice carried command in spite of the gentle way he spoke the words. Even so, nobody would defy orders issued from the hulk of a man that stood there, lips trembling in silent memory of the loss of his beloved wife.

“Don’t just make an allowance for it. I think that kiss deserves applause!” Kenneth raised a cheerful shout, which was echoed by the bystanders. His tightly tied braid of long, black hair swept from side to side as he led the crowd in cheers. Though Jane’s cooking had enlarged his waist in recent months, his arms were as heavily muscled as ever.

“Although I appreciate the thought you all have given to my love life, some things demand more prompt attention than world-changing magics do.” Osric returned Kenneth’s smile and bowed a jester’s bow.

“Excuse me?” Bridgett looked indignant at the exchange.

Both Osric and Kenneth looked sufficiently chastised, turning their eyes downward to the ground in shame, but Bridgett wasn’t through with them.

“If you insist it couldn’t wait, you insist on applause, and you think a nod toward the crowd is warranted”—she turned toward Osric with mischief in her eyes—“then I’m afraid I must insist on a more impressive kiss.”

Osric looked up with pleading eyes while searching for a way to extricate himself from the situation he had found himself in. He noticed a distinct upward turn to her lips, and a playful glint to her eyes before her words registered. Shortly thereafter, the laughter began to trickle toward his ears—first from his left, then his right. He couldn’t resist the temptation to grant her wish, and so he did, taking her into his arms in a low dip that hushed the crowd.

When they stood again, Kenneth’s chest was shaking in silent laughter. Bridgett turned her attention toward him, squinting in mock annoyance.

“Now is a good time for that applause you were talking about.”

He answered with genuine praise in his vocalization, and he quickly had all but Gus joining in the joviality.

“And now would be a good time for your bow.”

Osric bent in acquiescence before Bridgett stepped to his side and curtsied.

Cowbells sounded in the distance and caught the attention of each expectant ear, interrupting the playful display. Everyone glanced around, looking for the source of the sound. The old Vigile barracks stood as a backdrop to the lush, green grounds where most of the Aranthian training took place, but even those who typically joined in scholarly talks out on the early morning lawn were gathered close to hear the chatter. The sound grew steadily louder, and moments later a herd of cattle pierced the veil that encapsulated the Aranthian grounds and came around the corner of the barracks.

With a smile, Osric shouted. “David!”

The face of James’s young assistant, with close-cropped hair and a wide, insecure expression present as always, peered out the window of the kitchen. “Yes, sir?”

“There’s your cowbell!” Osric pointed toward the southern barrier, and David disappeared to the sound of pots clattering to the ground.

“Can we get back to more pressing matters, or should I be forced to endure more waiting while you attempt to conceive a child while we all watch?” Gus folded his arms and sat down impatiently.

“You’re right, Gus.” Osric looked from one face to the next, considering how best to proceed. The cattle lowed in the distance as all eyes were trained on him. Dozens of the men gathered couldn’t appreciate the significance of the timing of the revelation, but those who had accompanied him on the first tentative venture outside of his home would.

The first prophecy he had been given on the dragon platform had told them all that a battle would still need to be fought once they had discovered what he now knew. It was almost comical how simple it all became when the truth found light.

“Gus, what does it take to initiate a power lock?” A smile creased Osric’s face.

“What, am I a student of my own trade, now?” Gus deepened his tortured scowl.