Read The Word for World is Forest Online

The Word for World is Forest 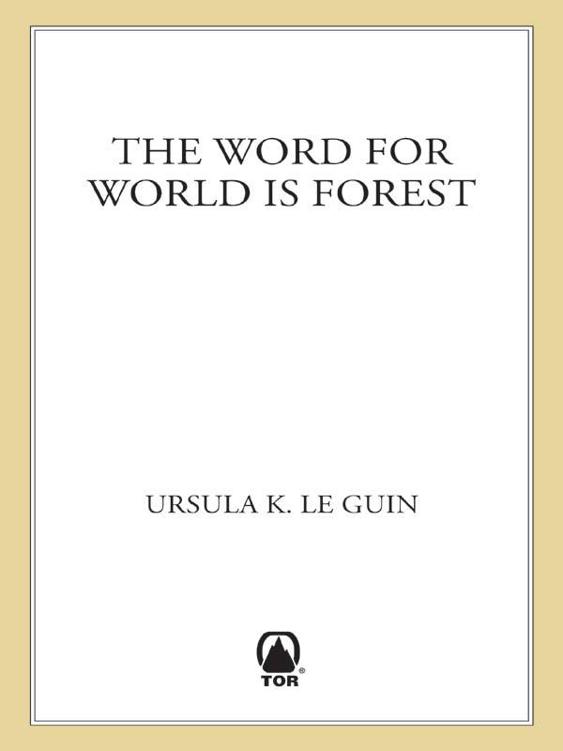 Copyright infringement is against the law. If you believe the copy of this e-book you are reading infringes on the author’s copyright, please notify the publisher at:
us.macmillanusa.com/piracy
.
Table of Contents

This is a work of fiction. All of the characters, organizations, and events
portrayed in this novel are either products of the author’s imagination
or are used fictitiously.

THE WORD FOR WORLD IS FOREST

FOR JEAN
Who Went Ahead

Two pieces of yesterday were in Captain Davidson’s mind when he woke, and he lay looking at them in the darkness for a while. One up: the new shipload of women had arrived. Believe it or not. They were here, in Centralville, twenty-seven lightyears from Earth by NAFAL and four hours from Smith Camp by hopper, the second batch of breeding females for the New Tahiti Colony, all sound and clean, 212 head of prime human stock. Or prime enough, anyhow. One down: the report from Dump Island of crop failures, massive erosion, a wipe-out. The
line of 212 buxom beddable breasty little figures faded from Davidson’s mind as he saw rain pouring down onto plowed dirt, churning it to mud, thinning the mud to a red broth that ran down rocks into the rainbeaten sea. The erosion had begun before he left Dump Island to run Smith Camp, and being gifted with an exceptional visual memory, the kind they called eidetic, he could recall it now all too clearly. It looked like that bigdome Kees was right and you had to leave a lot of trees standing where you planned to put farms. But he still couldn’t see why a soybean farm needed to waste a lot of space on trees if the land was managed really scientifically. It wasn’t like that in Ohio; if you wanted corn you grew corn, and no space wasted on trees and stuff. But then Earth was a tamed planet and New Tahiti wasn’t. That’s what he was here for: to tame it. If Dump Island was just rocks and gullies now, then scratch it; start over on a new island and do better. Can’t keep us down, we’re Men. You’ll learn what that means pretty soon, you godforsaken damn planet, Davidson thought, and he grinned a little in the darkness of the hut, for he liked challenges. Thinking Men, he thought Women, and again the line of little figures began to sway through his mind, smiling, jiggling.

“Ben!” he roared, sitting up and swinging his bare feet onto the bare floor. “Hot water get-ready, hurry-up-quick!” The roar woke him satisfyingly. He stretched and scratched
his chest and pulled on his shorts and strode out of the hut into the sunlit clearing all in one easy series of motions. A big, hard-muscled man, he enjoyed using his well-trained body. Ben, his creechie, had the water ready and steaming over the fire, as usual, and was squatting staring at nothing, as usual. Creechies never slept, they just sat and stared. “Breakfast. Hurry-up-quick!” Davidson said, picking up his razor from the rough board table where the creechie had laid it out ready with a towel and a propped-up mirror.

There was a lot to be done today, since he’d decided, that last minute before getting up, to fly down to Central and see the new women for himself. They wouldn’t last long, 212 among more than two thousand men, and like the first batch, probably most of them were Colony Brides, and only twenty or thirty had come as Recreation Staff; but those babies were real good greedy girls and he intended to be first in line with at least one of them this time. He grinned on the left, the right cheek remaining stiff to the whining razor.

The old creechie was moseying ’round, taking an hour to bring his breakfast from the cookhouse. “Hurry-up-quick!” Davidson yelled, and Ben pushed his boneless saunter into a walk. Ben was about a meter high and his back fur was more white than green; he was old, and dumb even for a creechie, but Davidson knew how to
handle them; He could tame any of them, if it was worth the effort. It wasn’t, though. Get enough humans here, build machines and robots, make farms and cities, and nobody would need the creechies any more. And a good thing too. For this world, New Tahiti, was literally made for men. Cleaned up and cleaned out, the dark forests cut down for open fields of grain, the primeval murk and savagery and ignorance wiped out, it would be a paradise, a real Eden. A better world than worn-out Earth. And it would be his world. For that’s what Don Davidson was, way down deep inside him: a world-tamer. He wasn’t a boastful man, but he knew his own size. It just happened to be the way he was made. He knew what he wanted, and how to get it. And he always got it.

Breakfast landed warm in his belly. His good mood wasn’t spoiled even by the sight of Kees Van Sten coming toward him, fat, white, and worried, his eyes sticking out like blue golf-balls.

“Don,” Kees said without greeting, “the loggers have been hunting red deer in the Strips again. There are eighteen pair of antlers in the back room of the Lounge.”

“Nobody ever stopped poachers from poaching, Kees.”

“You can stop them. That’s why we live under martial law, that’s why the Army runs this colony. To keep the laws.”

A frontal attack from Fatty Bigdome! It was almost funny. “All right,” Davidson said reasonably, “I could stop ’em. But look, it’s the men I’m looking after; that’s my job, like you said. And it’s the men that count. Not the animals. If a little extra-legal hunting helps the men get through this godforsaken life, then I intend to blink. They’ve got to have some recreation.”

“They have games, sports, hobbies, films, teletapes of every major sporting event of the past century, liquor, marijuana, hallies, and a fresh batch of women at Central, for those unsatisfied by the Army’s rather unimaginative arrangements for hygienic homosexuality. They are spoiled rotten, your frontier heroes, and they don’t need to exterminate a rare native species ‘for recreation.’ If you don’t act, I must record a major infraction of Ecological Protocols in my report to Captain Gosse.”

“You can do that if you see fit, Kees,” said Davidson, who never lost his temper. It was sort of pathetic the way a euro like Kees got all red in the face when he lost control of his emotions. “That’s your job, after all. I won’t hold it against you; they can do the arguing at Central and decide who’s right. See, you want to keep this place just like it is, actually, Kees. Like one big National Forest. To look at, to study. Great, you’re a spesh. But see, we’re just ordinary joes getting the work done. Earth needs wood, needs it bad. We find wood on New Tahiti. So—we’re
loggers. See, where we differ is that with you Earth doesn’t come first, actually. With me it does.”

Kees looked at him sideways out of those blue golf-ball eyes. “Does it? You want to make this world into Earth’s image, eh? A desert of cement?”

“When I say Earth, Kees, I mean people. Men. You worry about deer and trees and fiberweed, fine, that’s your thing. But I like to see things in perspective, from the top down, and the top, so far, is humans. We’re here now; and so this world’s going to go our way. Like it or not, it’s a fact you have to face; it happens to be the way things are. Listen, Kees, I’m going to hop down to Central and take a look at the new colonists. Want to come along?”

“No thanks, Captain Davidson,” the spesh said, going on toward the Lab hut. He was really mad. All upset about those damn deer. They were great animals, all right. Davidson’s vivid memory recalled the first one he had seen, here on Smith Land, a big red shadow, two meters at the shoulder, a crown of narrow golden antlers, a fleet, brave beast, the finest game animal imaginable. Back on Earth they were using robodeer even in the High Rockies and Himalaya Parks now, the real ones were about gone. These things were a hunter’s dream. So they’d be hunted. Hell, even the wild creechies hunted them, with their lousy little
bows. The deer would be hunted because that’s what they were there for. But poor old bleeding-heart Kees couldn’t see it. He was actually a smart fellow, but not realistic, not tough-minded enough. He didn’t see that you’ve got to play on the winning side or else you lose. And it’s Man that wins, every time. The old Conquistador.

Davidson strode on through the settlement, morning sunlight in his eyes, the smell of sawn wood and woodsmoke sweet on the warm air. Things looked pretty neat, for a logging camp. The two hundred men here had tamed a fair patch of wilderness in just three E-months. Smith Camp: a couple of big corruplast geodesics, forty timber huts built by creechie-labor, the sawmill, the burner trailing a blue plume over acres of logs and cut lumber; uphill, the airfield and the big prefab hangar for helicopters and heavy machinery. That was all. But when they came here there had been nothing. Trees. A dark huddle and jumble and tangle of trees, endless, meaningless. A sluggish river overhung and choked by trees, a few creechie-warrens hidden among the trees, some red deer, hairy monkeys, birds. And trees. Roots, boles, branches, twigs, leaves, leaves overhead and underfoot and in your face and in your eyes, endless leaves on endless trees.

New Tahiti was mostly water, warm shallow seas broken here and there by reefs, islets, archipelagoes, and the
five big Lands that lay in a 2500-kilo arc across the Northwest Quarter-sphere. And all those flecks and blobs of land were covered with trees. Ocean: forest. That was your choice on New Tahiti. Water and sunlight, or darkness and leaves.

But men were here now to end the darkness, and turn the tree-jumble into clean sawn planks, more prized on Earth than gold. Literally, because gold could be got from seawater and from under the Antarctic ice, but wood could not; wood came only from trees. And it was a really necessary luxury on Earth. So the alien forests became wood. Two hundred men with robosaws and haulers had already cut eight mile-wide Strips on Smith Land, in three months. The stumps of the Strip nearest camp were already white and punky; chemically treated, they would have fallen into fertile ash by the time the permanent colonists, the farmers, came to settle Smith Land. All the farmers would have to do was plant seeds and let ’em sprout.