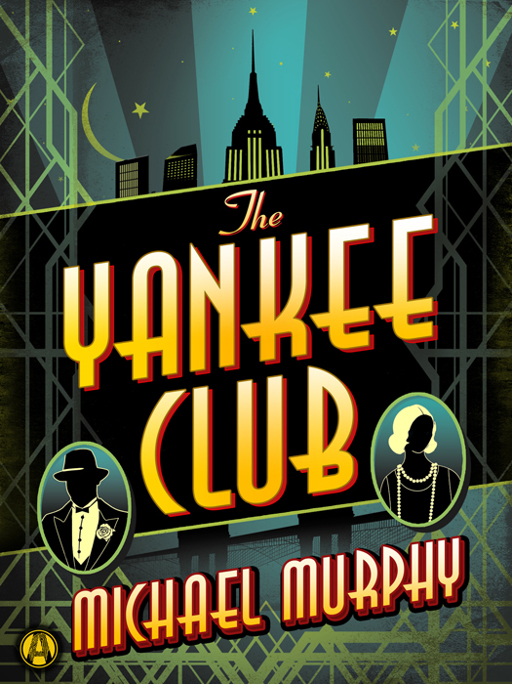 The Yankee Club
is a work of fiction. Names, characters, places, and incidents either are the products of the author’s imagination or are used fictitiously. Any resemblance to actual events, locales, or persons, living or dead, is entirely coincidental.

ALIBI is a registered trademark and the ALIBI colophon is a trademark of Random House LLC.

Chapter 1: The Return of Blackie Doyle

Chapter 7: The Green Hippopotamus and the Stalker

Chapter 8: Dorothy and The Greek Slave

Chapter 9: She Had Me in Stitches

Chapter 11: The Bambino and Peaches

Chapter 12: A Dozen White Roses for My Funeral

Chapter 13: The Wake of Mickey O’Brien

Chapter 14: A Warrior on a White Horse

Chapter 16: A Man with a Conscience

Chapter 18: High Noon at the Plaza

Chapter 20: The Streets of New York

New York City, 1933. Bootleg alcohol fuels the spread of organized crime. After thirteen years, the country finally accepts Prohibition as a noble but failed experiment. The Great Depression isn’t measured just by the twelve million out of work or the eleven thousand failed banks, but by the crushed hopes and shattered dreams of countless Americans. Less than a hundred days into the new administration, opposition mounts to President Roosevelt’s radical New Deal solutions. Those who cling to their wealth and power will do anything to keep from losing both.

Chapter 1
The Return of Blackie Doyle

As my train drew closer to New York City, the dining car’s rhythmic sway offered no comfort to the painful memories I left behind two years earlier. I ignored the blank sheet of paper in front of me. Rain spattered against the window, and lightning streaked above the countryside. The train didn’t slow as we headed into a torrential storm.

“Sir?” The waiter carried a carafe of coffee to the table, smiling like a vaudeville tap dancer.

He cocked his head. “You been tapping your pen on the coffee cup.”

I was? I slid the cup closer to him. “I’ll have a little more coffee, please.”

He filled the cup and moved to the next table where two men argued about the proper size of their wager over the prospect Prohibition would be repealed before 1933 came to a close.

I tried to tune them out and focus on revising to my publisher’s satisfaction the last chapter of my latest mystery. Since departing Tampa, I’d tossed out half the paper I brought with me. I had nothing, and Mildred, my editor, wouldn’t be happy.

The dining car door hissed open. A middle-aged woman with a fox stole curled around her neck entered smiling, as if she expected a round of applause. To my surprise she carried my latest novel,
The Return of Blackie Doyle
.

The sight of one of my readers never failed to lift my spirits. Writing spared me the financial calamity suffocating the economy. Judging by the woman’s fur, her flowered silk dress, and her diamond necklace, she wasn’t hurting either.

Beside her stood a bored-looking blonde in her early twenties, wearing a lemon-colored dress and a pearl necklace. Tight curls poked from beneath a chamois hat. Matching gloves completed the Garbo look. The only accessory out of place was the round black-rimmed glasses the actor Harold Lloyd would’ve envied.

They parked themselves beside my table. “I told you, Dorothy. It is Jake Donovan.” The woman set the novel in front of me. “My daughter would love you to sign your novel.”

“It would be a pleasure.” I gave them the polished smile Mildred helped me perfect, but I couldn’t avoid staring at the beady dark eyes of the dead fox around the woman’s neck. “Won’t you have a seat?”

The mother eased into the chair closest to the window. She set a beige handbag on the table and signaled the waiter. Instantly I regretted the invitation since she looked as if she’d settled in for the remainder of the trip.

The Prohibition debaters at the next table stared at the woman’s timid and stunning daughter. She perched across from me, on the edge of her chair, as if she might get up and leave any minute. Her blue eyes avoided contact while she adjusted the perfectly placed silverware in front of her.

The waiter filled the two women’s cups and retreated.

The mother pulled a silver flask from her handbag and stirred a splash of booze into her cup. “I’m Peggy Greenwoody.” She took a gulp like an ironworker at an all-night diner. “Call me Peggy.”

Her last name clawed a memory from a recent conversation with my Florida poker buddies. “Greenwoody. Any relation to Oliver Greenwoody, the war hero?”

“My husband.” Her face lit with prideful glee. “Oliver can’t get away to the country so we’re visiting him for a few days. Saturday he’s taking Dorothy and me to a Broadway play. It’s the final weekend of
Night Whispers
with William Maddow and—”

“Laura Wilson.” My Laura. The burning dread returned. I glanced through the rain-swept window. My thoughts drifted back two years to Penn Station when I stepped onto the train with a final glance back, still hopeful Laura would come to see me off—hoping she’d come to talk me out of leaving.

Glancing at me for the first time, Dorothy stirred her coffee like it was the best Joe ever. “I hear she’s marvelous.”

“What takes you to New York?” Peggy asked me. “You on your way home?”

Home? I hardly knew the meaning of the word anymore. “Business.”

Mrs. Greenwoody snatched the book, flipped to the last page, and read a moment. She pointed to a line below my photograph. “Says you currently live in Tampa, Florida, but grew up in New York City.” She glanced down at the book as her daughter stared at me. “You were an amateur boxer!”

“My father boxed a little to put food on the table when my sisters and I were kids. I never boxed, but I grew up in a tough neighborhood. The bio is my publicist’s way of explaining all those fights I got into as a kid.” I pointed to a small scar above my right eyebrow, courtesy of Laura’s old man.

Mrs. Greenwoody read aloud, “After serving his country during the Great War, Jake Donovan joined the Pinkerton Detective Agency. He opened his own detective agency in 1927—”

“The year the Babe socked sixty,” I said.

I couldn’t help but smile at the young woman. “The Bambino.”

Dorothy grinned. “The Sultan of Swat.”

Her mother’s life was obviously so full she didn’t have room for the Babe. She ignored our baseball banter and picked up where she left off in the bio. “In 1927. Two years later Donovan began a mystery series about fictional detective Blackie Doyle.”

A surprising tease danced in Dorothy’s blue eyes. “Are you a two-fisted ladies’ man like Blackie Doyle?”

Behind her large black glasses hid an attractive, intelligent woman with a sharp sense of humor. I chuckled. “If I behaved like Blackie, I’d get slapped by women a lot.”

“Oh, I don’t know.” She leaned forward and removed her glasses. “You wear a white rose in your lapel, like Blackie.”

I chuckled. “That’s our only similarity, let me assure you.”

Her flirtatious smile would’ve curled most men’s toes, but I could use another complication in my life like I could use an ulcer. I preferred the shy Dorothy Greenwoody who hid behind large black glasses. This Dorothy was beautiful and trouble. “If you ladies will excuse me, I should return to my room and get to work finalizing my next book. My editor doesn’t think Blackie should settle down with one woman.”

“I most certainly agree.” Dorothy’s manicured nails toyed with her pearl necklace. “He’d lose his roguish charm with just one woman.”

“Unless it’s with the right woman.” Mrs. Greenwoody held my gaze then gave a quick nod toward her daughter. “We’re staying at the Plaza for a few days. Perhaps you’d join us for a drink.”

“I’m not sure how long I’ll be in town, but thank you for the gracious invitation.”

With Dorothy’s looks, she hardly needed her mother to play matchmaker. At least the two women helped place my sense of dread over my return to the city on hold.

Mrs. Greenwoody finished her coffee. “Dorothy, if I’d waited around for your father to ask me to dance, I probably would’ve married someone far less interesting. Probably Christian Chandler.” She gazed through the window.

It didn’t take a writer’s imagination to assume she pictured a young, dashing Mr. Chandler, a man with less dough and fame than Oliver Greenwoody, but one who curled her toes
years ago.

I winked at Dorothy. “So you’re interested in me romantically, is that what I’m hearing, Mrs. Greenwoody?”

Peggy bellowed with laughter and slapped the table. A dozen passengers gave her disapproving stares. If she noticed, she didn’t show it. “I might be too much woman for you, son, but my daughter here …”

I signaled the waiter for the check.

Dorothy slid a foot up the side of my leg. She hid a playful smirk from her mother.

Despite my detective past, I’d completely misjudged this young woman. I scooted the chair back a ways, but her foot continued its caress beneath the tablecloth.

The waiter set the check beside my cup. “Thank you, sir.”

I hurriedly signed and slid the chair back. I shook Mrs. Greenwoody’s offered hand.

Her eyes locked on mine. “A pleasure.”

An hour later, just after dark, the train pulled into Penn Station. I stepped off in the city I hadn’t expected to see for years. Yet, here I was.

Hopefully it would only take a couple of days of pounding on a typewriter and sweettalking Mildred into a compromise ending. Two days were enough to visit the old neighborhood, as long as I didn’t run into Laura.

I tipped the porter who retrieved my bags. Before I could step outside and hail a cab, a man called, “Mr. Donovan. Jake Donovan?”

I nodded toward a thin man in a brown suit and scuffed shoes. Chewing on a toothpick, he flashed a gap-toothed smile.

He spit out the toothpick and shook my hand, revealing the frayed cuffs, calluses, and chipped nails of a hardworking man. He tipped his hat and grabbed my bags. “Mildred sent me. I’m your driver until you’re safely on the train back to Florida.”

My editor, a stickler for details. I needed someone to drive me around New York City like Shirley Temple needed more dimples. The man’s frayed cuffs said he could use the job, so I swallowed my pride.

Outside I breathed in the thick, damp air. The man sidestepped rain puddles and led me to a green Model A coupé double parked beside an empty cab. He opened the rear door. “Mildred says I should get you checked into the hotel.”

I climbed in the backseat. “Nice car.”

“Ain’t she a beaut? Mildred rented it. Says you should ride in style.”

“She thinks of everything.”

The man set the bags beside him in the front seat. He stuck a fresh toothpick in his mouth and started the car. We sped from the station. “Never met her, just by phone. She a looker?”

Mildred? I’d never thought of her in that way. Forty, stylish, and totally devoted to her work and her authors. “She’s very businesslike.”

Plaguelands (Slayers Book 1) by Jae Hill
One Night: A BWWM Interracial Romance by Camilla Stevens
How Beautiful It Is and How Easily It Can Be Broken by Daniel Mendelsohn
R.I.L.Y Forever by Norah Bennett
The Lady Risks All by Stephanie Laurens
Saved By A Siren: Spencers in Love Book One by Abigail Graves
All Who Go Do Not Return by Shulem Deen
The Betrayal of Maggie Blair by Elizabeth Laird
Confession by Gary Whitmore
The Hunters by Chris Kuzneski