Read The Zombie Whisperer (Living With the Dead) Online

The Zombie Whisperer (Living With the Dead) 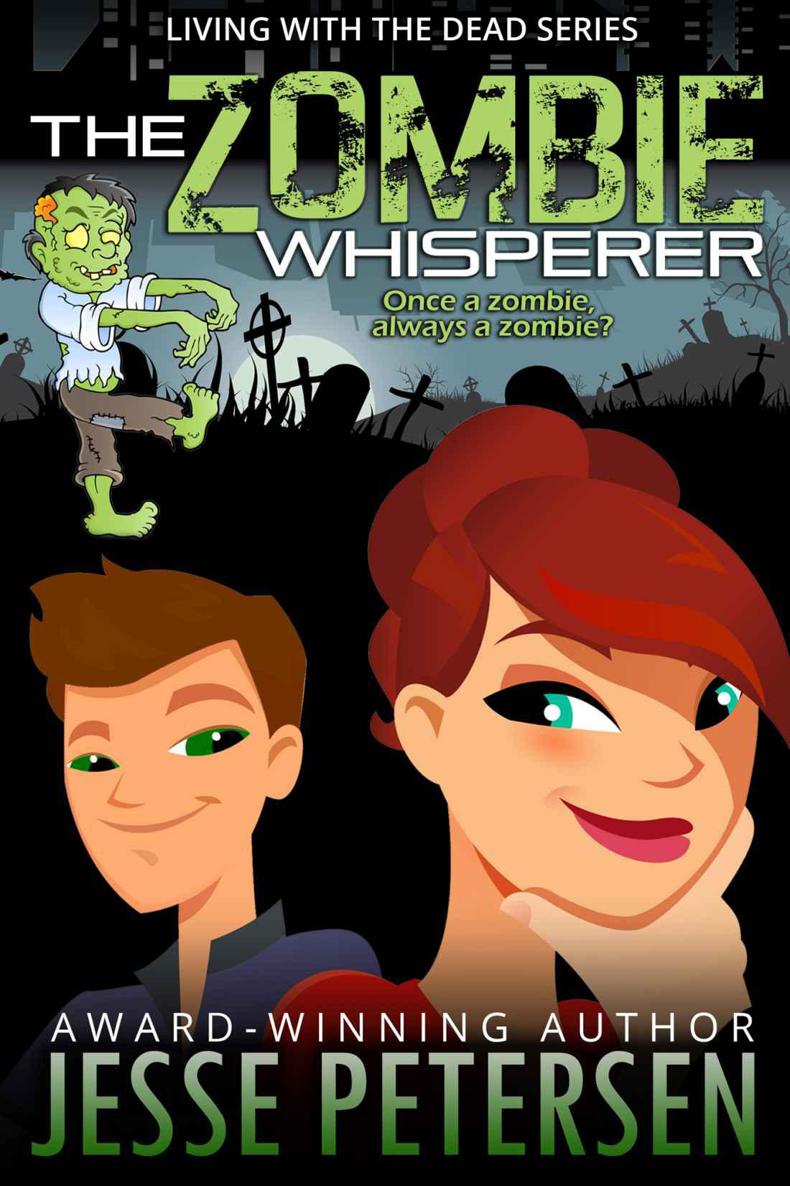 Praise for Married with Zombies

"An entertaining journey through an apocalyptic landscape of relationship issues, pet peeves, and zombies. Make sure to pack your shotgun and emotional baggage." --S.G. Browne, author of Breathers: A Zombie’s Lament

“Married with Zombies is super fast-paced, crazy funny, and even a little romantic. (Not in a hot, steamy zombie sex way… but in a cute, romantic comedy way!) This is an absolute must read for everyone! I had never read a zombie book before this one, I figured that so wasn’t my thing… Um, it is. Jesse Petersen will make you an instant fan of all things zombie!” --The Bookish Brunette

“Overall, I think that this book is zombie-licious! There was action, suspense, and relationship tension with a humorous angle.  David and Sarah’s journey offers several different reactions to the crisis that gives a sense of realism to the fantasy. I would recommend adding this book to your zombie apocalypse preparation kit.” --Dark Faerie Tales

Other books in the Living with the Dead series:

All characters and events in this book are fictitious.  Any resemblance to real people, alive or dead, is entirely coincidental

Of course, he’d be a zombie, but whatever.

The name was part of why we ended up landing here after roaming around through Wyoming and then up to Montana. Dave said that a place called Tranquil Springs just couldn’t have zombies.

He was right in some respects. It was the very end of winter here. April, to be precise. I know that’s Spring to most people, but up in the high elevations we still have freezing temps and snow that melts off as it gets up into the forties during the day.  And then it spits back up in storms at night to replenish the ground cover.

Just for your information, though, some of the books written before the zombie fiasco were right. Zombies don’t really care for snow. It makes them sluggish and easier to kill and that means less of them in this tiny ghost town. So, yay us and yay for winter. I hated shoveling, but I hated zombies even more.

The door to our rambling three-bedroom ranch house opened and Dave pushed in, carrying a bunch of firewood. More than he should have been able to carry, for sure. But then, Dave wasn’t really normal anymore. I was coming to accept that. I even liked some of the benefits of his “special powers”. Super strength came in really handy a lot of days.

“This will keep us going all night and into the morning,” he said as he set the logs into the wood box next to the big fireplace in the living room one by one. The box was built into the wall and made life a lot easier. The rich people who had built this place really thought of everything.

Of course, we’d still found them roaming around undead in the paddock where the horses used to live when we got here a couple of months ago. Slam-Blam-Thank-You-Ma’am and we’d claimed ownership to their little piece of mountain heaven.

Yes, sadly, it was as easy as that for us nowadays. Zombies were just… a part of life now. An annoyance like mosquitos.

Really badass mosquitos that sometimes swarmed your car and tried to eat you. But that was another story entirely.

“Um, hello?” Dave said as he flopped down next to me on the couch and picked up the book he’d been reading before he went for more firewood.

I shook my head. “Sorry. Lost in thought.”

He put the bookmark back between the pages and looked at me with that same sweet and concerned expression he always had nowadays. Like he knew something I didn’t know. He was in the zombie club now, and I felt it.

But I had a secret, too.

“So what are those deep thoughts, Sarah?” he asked. “Because I can see you’re gnawing on something.”

I arched a brow, a move I had been working on for months. It’s funny how you get obsessed on some things when you don’t have bad reality television anymore… just a bad reality.

“So is reading minds a new zombie power?” I asked, probably a little more sarcastically than I should have.

He pursed his lips. “Nope. Just know you, that’s all.”

“Yeah, you do,” I admitted and settled my head back against the rich, smooth leather of the couch. “Okay, it’s just that we’ve been here in Montana for a while now and it’s been pretty nice. Just a few zombies here and there, but you found that almanac and you know that a real thaw is coming within the next couple of weeks. And you know that means
they’re
going to be on the move again. So do we stay
here
, where we have a trek to get to supplies?”

He stared at me with this ‘what the hell’ expression I still wasn’t particularly fond of. “What do you mean a trek? The people who lived here before the outbreak were at least semi-prepared for being locked down. Their pantry has some good basics that we can stretch and we can add to that with the game in them there hills.” He pointed out the window to the snowy mountain in the not-so-distance. “We could probably stay here a year or more before we’d really have to think about our next move. Who knows what could happen before that point.”

I bit the inside of my mouth. “A
year
? Jeez, David, I didn’t think we’d hang out that long in any one place ever again.”

As I got up and started pacing around in front of the fire, he watched me, obviously confused by my attitude.

“What do you mean? Do you have somewhere to be?”

I glared at him briefly. “Yes, so many appointments in my day planner, you know.”

He shrugged at my sarcasm. “So do you really want to start rambling down the dangerous highway, bumping into crazies and zombie pods? Do you really want to resort to clearing houses one by one to find old Campbell’s soup, but only in flavors you don’t like and never knowing where we’re going to sleep at night?”

I swallowed. When he put it that way, it sounded stupid. It was stupid. But despite all that… I kind of
liked
the road. Despite every horrible thing he’d just described, the apocalypse had brought out something adventurous and free-spirited in me. My own little zombie benefit without zombie side-effect.

“We figured out how to not get a divorce, found a cure for zombie-ism and quite possibly saved the world when we were roaming around aimlessly on the road, so it wasn’t
all
bad,” I pointed out.

He stared at me for a minute and then he grinned. He was cute, I just want to say that.

“Okay, okay, I
will
grant you that point,” he said with a shrug.

I smiled in triumph. “Thank you.”

Apparently he wasn’t done, though. “
But
it’s been a few months since we ‘saved the world’ by turning over the cure across the border and we haven’t seen any benefit from it. Not a soldier or a flier dropped to say, ‘we’re coming to get you’ or anything. Just saying, we may have fallen short on that save the world part.”

I thought about that for a minute and tried not to dwell too long on my parents and our friends who had been left behind the wall. We’d last seen them being chased by government agents who were more than ready to kill them. If the world hadn’t been saved, that left some pretty heavy implications for them and their safety.

“Maybe that means we should try again,” I suggested.

He rolled his eyes and pushed to his feet to join me, probably hug me, which I could use at that point with all those dark thoughts in my head. But before he could, there was a shrill
beep, beep, beep
that filled the air.

I jerked to attention. “Perimeter alarms!”

Dave had set up some motion detector perimeter alarms up to a generator when we first got here. They were the only electric-driven thing we had left and sometimes I just stared at the little green light on the speaker that alerted us, mesmerized by power-driven color. Now they were going crazy, beeping one after another, flashing red madness.

Dave shook his head and moved for the arsenal of guns we had in every room of the house. He pulled the gun case in the living room open and started yanking out weapons. He tossed a few to me and we started loading.

“
All
of them are alerting,” he muttered, almost more to himself than to me. “All seven alarms. It means…”

I looked out the big picture window with the view of the mountain in the distance. It also currently provided me a great view of a shit ton of zombies roaming their way onto the property all the way across the snowy, muddy lawn.

Dave slammed the action on the shotgun in his hands shut and let out a stream of very creative cursing. “What do you think? Twenty?”

“Twenty-five,” I said as I did quick math in my head.

“I guess Spring has Sprung.”

“Aw, the zombies are blooming early,” I agreed.

He laughed, but then he gave me the ‘let the grown-ups talk’ look again. “Um, I should probably do this myself.”

I stifled the urge to roll my eyes. That was something I was working on, the eye rolling, because I’d read in a self-help book, (
yes
, I still read self-help books), that it could undermine a relationship. Didn’t really want to do that with Dave, not anymore. Even if he did drive me slightly crazy every once in a while.

I drew in a deep breath, tried to find my center and said, “David, sweetheart, we’ve talked about this.”

He nodded. “I know. And it’s nothing to do with you being a badass. You
are
a badass. It’s just that they don’t come after me. I can make the clean kills without endangering myself.”

It made sense, I know! With Dave’s zombie benefits, the other zombies didn’t even acknowledge him. Versus if I went out there, they’d come after me in snarling, drooling, biting, clawing droves. But still… we’d been fighting zombies together for
ever
so it sucked to suddenly be benched over and over again like a crappy quarterback who had outlived his prime.

That was football, right? I’d kind of forgotten already.

I shook my head. “At least let me go up on the roof and snipe.”

He seemed to ponder that option for a minute. A minute too long, really, and then he waved me off like he was granting me some wonderful opportunity.

“Fine, fine if you want to,” he said. “Just be careful. And if anything gets weird, duck inside and lock the doors.”

“I’ll go straight to the safe room,” I promised.

A lie. If shit went down I would stand at the front door and kill everything in sight until my last breath left my lungs. Well, I
thought
I would. Maybe I wouldn’t anymore.

I didn’t get to ponder that thought, though. He gave me a quick kiss before he slung his weapons, including a machete, into places where he could easily reach them and headed out the front door.

Tongues of Fire by Peter Abrahams
On the Way to Heaven (BWWM Romance) by Stacy-Deanne
Without a Doubt by Lindsay Paige
The Element by Ken Robinson
Sheikh's Blackmailed Love by Sophia Lynn
High Valley Manhunt: Laramie Davies #1 by B. S. Dunn
The Redemption by S. L. Scott
Eraser by Keith, Megan
The Navy SEAL’s Holiday Fling: Ballybeg Bad Boys, Book 3 by Zara Keane
Six of One by Joann Spears