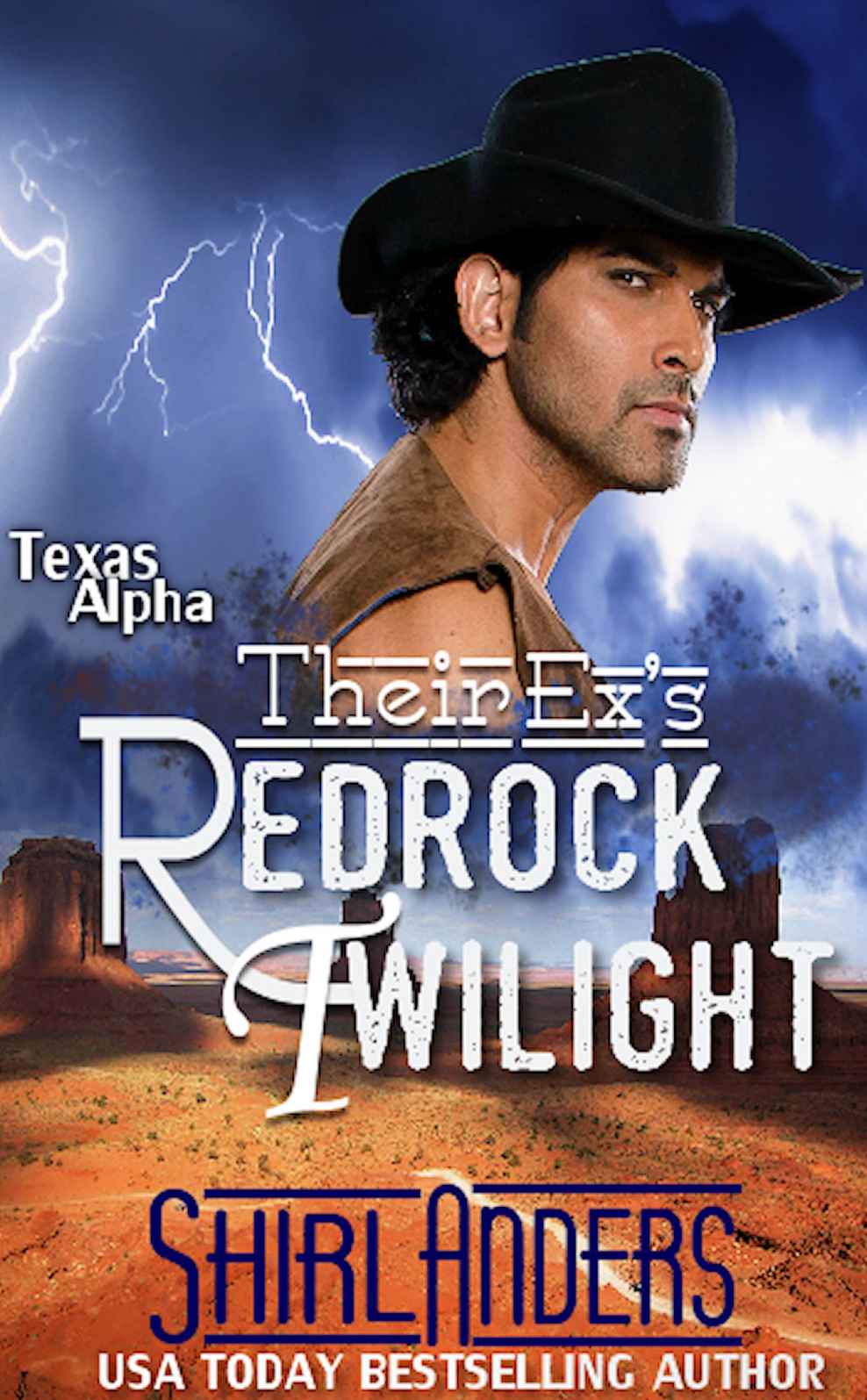 This book is a work of fiction. Names, characters, places, and incidents are a product of the author’s imagination or are used fictitiously. Any resemblance to any persons, living or dead, business establishments, events, or locales is entirely coincidental.

No part of this book maybe be reproduced, scanned, or printed in any printed or electronic form without permission from the author. Please do not participate or encourage piracy of copyrighted materials in violation of author’s rights. Purchase only authorized editions.

Their Ex’s Redrock Series In

Three] Sexy In A Way, He Felt Deep

Five] It Burned In His Crystal Green Eyes

Six] She Blindsided His Life

Seven] I’m The Man Who Has Your Back

Ten] She Was Starting A New Life

Thirteen] He Branded Her Deep

Fourteen] I’ll Be A Good Girl

Sixteen] He Had Sweetness Cuddled Up To Him

Seventeen] Couldn’t Keep My Hands Off Her Curves

Twenty] Meant To Be

Tangled In Redrock: Worth It

Their Ex’s Redrock Series In

(
Tangled In Redrock: Worth It.

Is a short story at the end of this book, about Tess and Vincent Whitehorse.

Chronological, it is before this book, if you care to read it first.

F
inn checked the clock on the wall behind the front desk of his motel called Rowdie’s: ten twenty-one in the morning. He looked down at the gun he’d just finished loading and pulled back on the slide of his Glock, hearing the loud sound of a load hitting the chamber. Finn checked the safety again, and then stuffed the gun into the back waistband of his jeans, pulling his black Henley over it as his gaze rose.

“Damn it,” he swore, seeing his ex-wife’s car entering the parking lot. He’d called her last night, after months of not speaking to her, and told her
not
to come to Rowdie’s that morning. He’d not been nice about it. He thought he’d made an impression on her that that morning of all mornings she needed to stay the hell away. She knew what he did and she
knew
he was undercover, so why did she never listen?

“Jesus, help me,” he muttered, moving from around the counter. He couldn’t stop her, because he’d break his cover. Finn clenched his fist, thinking she probably wasn’t going to get hurt, just swept up in the trouble about to start. He could break her free of it, after it all went down.

Then he watched a tall dude in a suit get out of the car with her. Finn thought that maybe a little damn justice would be served, to Katie and her new lay, by them getting tangled up in shit, which was likely to scare the hell out of them.

“Yeah,” Finn muttered, as he checked the police tactical positions around his sleazy motel. They were all locked, loaded, and ready to go. Finn could hear it in his earpiece. The call came through the ranks that the tall dude was not one of the tangos they were looking for.

But Katie and the guy lingered outside, while Finn’s eyes narrowed, watching Katie roll up on her toes to kiss the guy. The guy liked it, stupid dick, and he grabbed her ass with two hands, bending down from his height to do it.

“Fuck,” Finn growled, prowling in a circle, feeling edgy and wrung tight. Katie was deep-throating the guy for Finn’s benefit, because she knew he’d be looking. Finn didn’t really give a damn about that, about her games; he was wired because he was ready to go.

“Where is fucking Creed?” he uttered.

Then he saw her.

And he’d never seen her before.

He knew that, because he sure as hell would have remembered. She had tits and ass like a fucking wet dream, with thick, dark hair and lips that even at a distance looked curvy, attractive, and extremely feminine. But the lady ... and Finn paused in his perusal a second to wonder what the hell a lady like her was doing by his motel and creeping by his side window.

Her eyes were all for Katie and the dude making out. Then, because the window was right across from him, Finn saw her hand lifting to her lips to stifle an obvious wail. Finn’s gaze jumped from the babe to the couple, doing the hot and heavy, then back to the babe with tears now running down from her incredible dark-lashed eyes.

Then it slammed him: who she
had
to be.

Coco nearly collapsed. She’d been looking for her husband for weeks, afraid he was murdered in a ditch or backroom somewhere, looking for him and just holding back her hysteria. And now to see Gordon
finally
. But Gordon had a slender blond woman hauled up his tall body and they were kissing passionately.

“Oh my Lord,” Coco groaned into her palm.

Passion? Gordon was
not
passionate. How could this be the outcome of Gordon’s disappearance? Maybe her mind had cracked looking for him for so long? Maybe she was hallucinating that her husband was making out with another woman. Coco knew that her marriage was on a thin edge, but this!

She placed her hand out to steady herself on the window of the motel office beside her. Maybe this was part of Gordon’s nefarious business dealings lately. Maybe the woman was forcing Gordon to—

“Don’t be an idiot,” Coco said to herself.

Coco had just reached the driveway when a big SUV squealed into it and past her, making her exclaim and totter backward on her heels, it was that close. The noise from the SUV started to lift Gordon’s head, and Coco opened her mouth to scream at him.

But she never got a word out, because a very strong man grabbed her from behind, clamping a hand over her mouth, and then he hauled her backward. Coco could feel a strong, muscular body like she’d never felt before, and she was so stunned, she forgot to scream.

She could barely believe the man could lift her, because she was not a slender woman. Then her survival instincts kicked in and she began to struggle as the man carried her right in the motel office’s front door. She was screaming bloody murder under his hand, when she heard sirens and saw flashing lights starting up a commotion out front of the motel.

The man—and she could only see the lower half of his face—had a pitch-black goatee and straight white teeth; those she could see because he was gritting them while he set her down quite gently against the wall. They were right by a large window looking out into the parking lot of the motel, but slightly concealed by a small portion of the wall.

His very large hand was still over her mouth while his tightly muscled body was pressed against her. It was making her mind twitch between the feelings of a man built like he was, touching her, while her stunned gaze was tracking events outside.

Then her captor, in a voice that made her shiver, growled, “That your man out there?”

She nodded, watching in horror as a team of police grabbed Gordon and the blond, but more of the police kept going toward the swerving SUV, which had nowhere to go.

“Hell,” her captor muttered. “Are you a part of this fucking shit?”

Coco’s gaze darted upward; electric-green irises filled her vision, and then they made her moan for some insane reason. Could charged irises do that? Could they make a woman moan with one look? Then, because she was totally freaked out and she really had a right to be, she bit him. Then she shoved.

Finn moved a step back at the unexpected shove, while he hissed between his teeth at the pain Sweet Tits was giving him with her pearly white teeth clamped into the meaty heel of his hand. Her eyes were like pools of brown, with the shape around them drawn in a challenge. He was surprised when she realized he wasn’t going to budge. No matter how much his fucking palm hurt.

He drew his brow down and challenged her back as she pounded on his sides several times.

“That’s my fucking wife out there with your dick husband being swept up in a multi-agency law enforcement sting, Brown Eyes,” he rasped at her.

Her teeth loosened suddenly on his palm, but he kept his hand over her lush lips. That dickwad outside messing with his wife Katie was a fucking fool to want any woman over Brown Eyes, he thought.

“If the agents find out about you they will take you in immediately,” he informed her, to her return shudder.

When he removed his hand, Finn expected her to scream questions at him about the takedown or accuse him of molesting her.

But her pretty lips softly whispered, “You must be devastated. I’m so sorry.”

Finn opened his mouth to tell her he wasn’t sorry over anything his crazy wife did, since they’d been separated for over a year and he really didn’t give a shit, but the hollow banging sound of shots fired popped. Finn slammed against Brown Eyes, grabbing her to turn her away from the wall, while he bear-hugged her from behind.

“Shots,” he growled, to her frightened whimper, while her really fine ass was cradled between his hips.

His split-second thought was that it had been too damn long since he’d had a babe in his arms, right before he got to business. His earpiece was blaring with updates, which he said out loud for Brown Eyes’ benefit.

“Two suspects in the vehicle. Shots fired from room one-ten. They’ve thrown a spike strip to pop the tires. Our cheaters are out of the immediate area. Both cuffed.”

“Gordon’s handcuffed?” Brown Eyes asked on an exclamation. Then she muttered, “I’m not sure I mind.”

Finn held her tight, but bent to her ear. “Fucking righteous, babe. They deserve it.”

More of her ass pressed around him, hardening fast under his jeans, as she leaned back to catch him with one brown eye.

“Righteous,” she said with a small smile.

Another shot popped off, and Finn moved them in case it punched through the wall, but it hit glass somewhere that shattered, as Brown Eyes exclaimed in fear.

“Just took down the driver and the shooter,” Finn reported, then he moved them so he could peer out the corner of the window on the other side. He saw part of the SWAT team herding men with their hands raised out of one of the motel rooms. He turned so Brown Eyes could see, and that put him behind her with his head right above hers.

“Gordon picked a bad day to come here and cheat,” she muttered below him.

“You sure him being here is random?” he asked her.

The Golden Princess: A Novel of the Change (Change Series) by S. M. Stirling
The Magister (Earthkeep) by Sally Miller Gearhart
Limit of Exploitation by Rod Bowden
Death Is My Comrade by Stephen Marlowe
The Eden Tree by Malek, Doreen Owens
The Death Card: A Liz Lucas Cozy Mystery by Dianne Harman
Convergence by Alex Albrinck
Dead And Buried by Corey Mitchell
The Lost Labyrinth by Will Adams
03 - Monster Blood by R.L. Stine - (ebook by Undead)