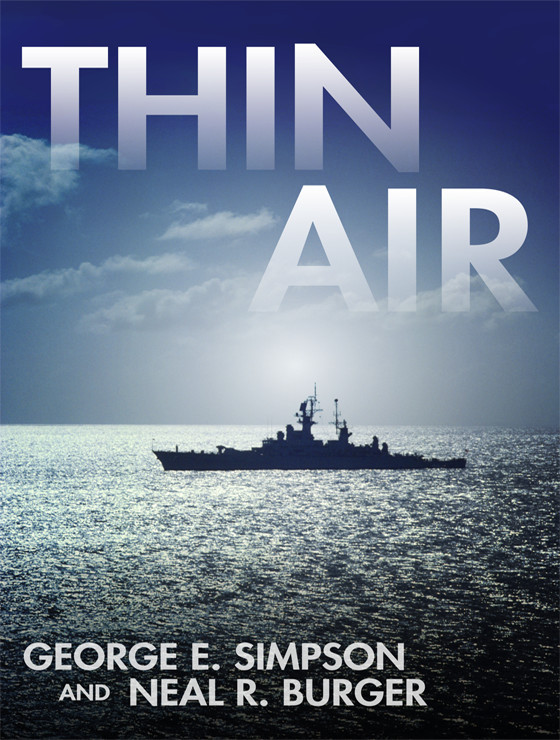 For Jean and Maureen

Our deepest thanks to Jeanne F. Bernkopf, manuscript editor, whose ideas were as sharp as her pencil; to William R. Grose, Editor-in-Chief, Dell Publishing Company, Inc., for support and deadlines and good sense; and to Stuart M. Miller, our far-seeing literary agent and good friend.

Four cranes loomed like sentinels in the fog—steel frameworks dulled by the mists swirling over the Navy Yard.

There was the clanking sound of the anchor chain running, then a splash. The shudder of the deck beneath his feet as the engines stopped.

His footsteps echoed loud on the wooden deck as he turned up the others.

Fletch, old buddy! We gonna do it today?

Looks that way,
he answered—as he always did.

He saw the ripple of apprehension, and felt it, too. Always the same every time.

The captain jumped down to the forward deck and droned orders at them.
Form up—everybody in a circle—maintain hand contact—

He stiffened when the alarm sounded. In reflex, his arms shot out, grabbing the two outstretched hands on either side.

The humming tone started low and distant, from behind the bridge and below. He felt the vibration building up through his shoes.

Then the deck started to go.

The circle moved, each man trying to draw closer to his neighbor.

He shifted, adjusted his position, and stared aft, locking onto the bridge.

The deck! Look at the deck!
someone yelled.

He swung his eyes down, then sucked air.

The deck had vanished.

Beneath his feet, he saw the vague outline of what must have been the chain locker. And below that—nothing.

Nothing except the dark waters of the river.

The humming tone climbed the scale, piercing through his body. A force gathered and swelled with the rush of noise.

The circle of men writhed, contracting like a mindless animal in pain. He watched a man's features contort with fear, the mouth moving, trying to form words that never came. The man's face vanished. All that remained was his right leg.

He watched the dismembered limb jerk back and forth in empty space, riding the roll of the invisible deck.

His terrified wife switched on a bedside lamp.

She ripped a hand free from his iron grip and cradled her husband's head against her breast. An hour later his heaving sobs finally subsided.

Hammond bit at his toast and leaned back in the chair to read the telegram once again. An autumn breeze stirred the curtains and he glanced up at them. They were hers. She had bought them and put them up herself—the girl in the telegram. Girl, hell. Woman.

He reached into his shirt and scratched his chest, looking out the window and down at the still green waters of the C&O. The Chesapeake and Ohio Canal ran right through Hammond's front yard. The locks were only two blocks away, the barge landing even closer than that.

They used to walk together—he and this woman—down the cobblestone bike path that had once been the old canal towing road, and they had picnicked together on the grass fronting the canal.

Jan Hoyle...she had long brown hair, huge green eyes, a pillowy body, and tanned skin. After their last fight she had walked out on him, left Georgetown forever, and he hadn't heard from her since. Almost two years ago, this coming Christmas.

Now, out of the blue, he'd received a telegram:

URGENT MUST SEE YOU. SAVE LUNCH

Today was Monday. Hammond pushed his toast aside and got up with the wire. He had read it four times since getting home Friday. It had haunted him all weekend. All the feelings he had worked so hard to bury had come rushing back to the surface: how much he had loved her once, how furious he had been when she'd left him.

About two a.m. last night he'd been unable to sleep. He had gotten up, had taken a long slug of brandy, and then had come to a smug conclusion: she wanted him back.

He had gone back to sleep feeling satisfied, but this morning the doubts were stronger than ever.

He glanced at his watch. She would probably call him at work. He thought about making a reservation at one of the Pentagon restaurants and the glorious folly of staging a
scene
for the benefit of tired generals and admirals.

Halmmond was feeling nasty and self-righteous. He imagined all sorts of entrances, greetings, thrusts, and ripostes...but in the back of his head nagged the thought that revenge wasn't justified. Yes,
she
had left
him,
but after three years of living together the subject of marriage had finally come up and he had said no. She had been shocked and hurt and had demanded to know why. He couldn't bring himself to tell her about his divorce:
that
he'd never told anyone.

At twenty-two, he had married a high school cheerleader just turned eighteen. The marriage lasted two months, just long enough for him to get his first sailing orders and for her to find a sugar-daddy.

The experience had even soured him on being at sea. Never again did he want to be caught in that position. So he finished his tour, then had gone back to get his pilot's wings and served a hitch in Naval Air. Today he was a "zoomie," attached to Naval intelligence, a land-locked career man from a family of sailors. And he'd never remarried. The reason why was a secret even to him, because he tried never to think about it.

So he had given Jan his customary line of poop about marriage: that it wasn't for him, it was too demanding, and these days nobody had to anyway. She had listened with the hurt building to tears, then she had taken a swing at him and called him names. She called him "liar" so many times he began to believe it.

In the two years since she had left, he had somehow managed to convince himself that it was all her fault, that they could have lived quite comfortably without the little ties that bind if she hadn't been so old-fashioned. Now, here she was on his doorstep again, and he was totally unprepared. What could she possibly want from him?

He glanced at his face reflected in the toaster and wondered what the attraction was. She wouldn't come back to him just for sex, would she? He felt a tingling of interest.

He finished his coffee quickly and pushed his cup and plate into the sink. He lived in a four-hundred-dollar one-bedroom apartment in an old two-story Dutch townhouse. He had a kitchen, a living room, and a small den which he had converted to an office after Jan had moved out.

He loaded his briefcase and stood for a moment, taking stock of himself again. I'm thirty-eight, he thought, unmarried. No immediate prospects, but no anxieties about it either. I've got a flat, a car, a job, and plenty of accrued leave. I can have any woman I want, within reason, and with no strings attached...so why am I alone?

He scowled at himself and cursed Jan again. He reached for his uniform blouse and cap. He was out the door and walking over to Thomas Jefferson Street a moment later.

In Washington, no one paid attention to the tall figure in uniform. Navy commanders were a dime a dozen in the nation's capital. Hammond jumped into his Ford Maverick and drove up to M Street, joining the flow of traffic headed west across the Key Bridge.

He parked in the north lot and walked across the grass to the Mall Entrance of the Pentagon. He cleared past the guard and went up the escalators to the third floor where he entered a door marked Naval Investigative Service, Pentagon Branch, Room C-630.

Hammond stopped at the receptionist's desk and gave her the required morning smile. She smiled back, pulled her blouse straight, and reached around for a stack of memos and TWX's. She handed them over ceremoniously and announced, 'The director will be around to see you in twenty minutes, sir."

"Thanks." Hammond walked into the Pit, a long room with glassed-in cubicles on either side of a wide aisle. Most of his co-workers were already in: he could hear chairs creaking, typewriters clacking, and voices droning on telephones. The daily drudge for the ten to twenty Navy officers on duty at this branch of the NIS. Yet they were supposed to be an elite task force, answerable only to the director. Some elite. Their operations were an unending exercise of clearing through red tape, bureaucratic hierarchies, and their own internal filing procedures. Much the same as any other government institution.

Hammond entered his cubicle in the center of the aisle, the only one big enough to hold a second desk.

He glanced at Ensign Just-Ducky: gorgeous, but a walking block of ice, except for the amenities.

"Black or brown?" she inquired with a stewardess' smile.

"One of each," Hammond smiled back. She ducked out, taking orders down the aisle. Hammond dropped the papers onto his desk and took Jan's telegram out of his pocket, slipping it under the phone so he wouldn't forget lunch. Already he found himself torn between hope and dread for her call.

He flipped quickly through the memos and tossed them into action slots. Most went under FILE, but three crept into SOON, and one into HOT.

Ensign Just-Ducky returned with his coffee. He started sipping the black and then the phone rang.

"A Mrs. Fletcher for you, Commander. She says you probably remember her as a Miss Hoyle."

He was very still for a moment.
Mrs. Fletcher
. So she was married. He punched into the line and said softly, "Hello, Jan."

There was an, embarrassed silence at both ends. "I got your wire," he said. "Where are you calling from?"

"You're married," he said flatly.

"Not now. He's at a meeting. Nicky, would you have lunch with us?"

Us, he thought. All his fantasies that she might be after him again were dispelled.

"You want me to meet him?" God, I must sound slow, he thought.

He heard the phone rattle as she put it down and moved away. He waited patiently, hearing something rustle, then a sharp intake of breath—a sob?

Hammond choked back a laugh. He had visions of the man she had married: some hulking Boris Karloff slinking through the corridors of a ritzy hotel, hand outstretched for a quick strangle....

Murder on Charing Cross Road by Joan Smith
Good Business: Leadership, Flow, and the Making of Meaning by Mihaly Csikszentmihalyi
The Saint Abroad: The Art Collectors/ the Persistent Patriots by Leslie Charteris
Seeing Further by Bill Bryson
Mentirosa by Justine Larbalestier
Demon Hunting In a Dive Bar by George, Lexi
Thin Air by Robert B. Parker
Against Medical Advice by James Patterson
Barbara Metzger by An Enchanted Affair
Changing Grace by Elizabeth Marshall