Read This Place is Death (A Curse Keepers Secret) Online

This Place is Death (A Curse Keepers Secret) 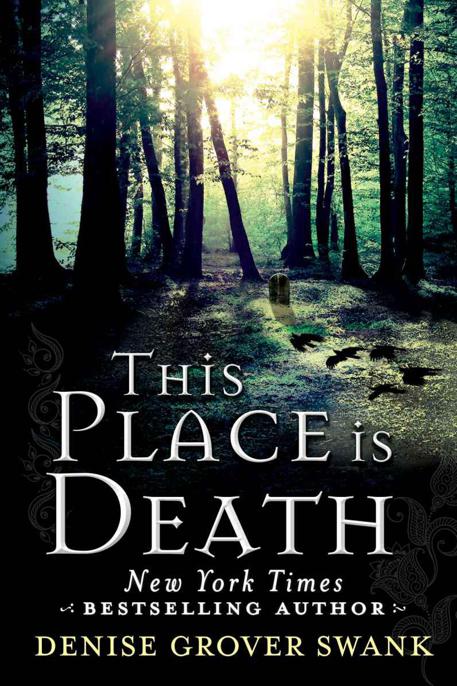 On the Otherside Series
(Young adult science fiction/romance)
HERE
THERE

To my father, whose love of early American History sparked an unexpected flame.

Ananias Dare had expected August in the New World to be hot, but this was how he envisioned hell—full of heat and raging tempers.

His cotton shirt clung to his back and arms and sweat rolled down his neck, making his collar scratchy, but the cries of the infant coming from his shelter sent prickles down his spine.

He was a father.

“It’s a girl!” Agnes called out from behind the thatched walls.

“Maybe a son next time,” gloated Tom, the father of three sons.

A girl. Pride and happiness swelled Ananias’s chest, but fear kept it contained. He wondered for the countless time what had possessed him to come to this godforsaken land. Why had he allowed his father-in-law to coerce him into crossing a damn ocean? The promise of a land rich with possibilities had been a lie.

There was only death in this place.

After a four-month voyage from England, the one hundred and seventeen voyagers had arrived on Roanoke Island less than a month ago. The natives were infuriated by the colonists’ presence, and they had already made their feelings known by killing Ananias’s friend, George Howe, six days after the settlers came ashore. Fear ran rampant because the Indians refused to consider a peaceful coexistence.

How long would it be before more died?

Roanoke Island had never been their true destination. Ananias’s father-in-law, Governor John White, had set his sights farther up the Virginia coast in Chesapeake Bay. But White had insisted they stop at Roanoke Island to collect the fifteen soldiers manning the fort the English had set up on their last excursion. All the search team had found was a deserted complex, overgrown with vegetation, and a single skeleton. There’d been no sign at all of the others. The news had spooked Fernandez, the fleet’s commander, and he had immediately insisted the colonists be sent ashore.

Despite Governor White’s insistence that the fort’s complete annihilation meant nothing, the colonists weren’t stupid. They knew this place was full of death and danger, but they had no choice in the matter. The two ships they’d arrived in bobbed offshore while the sailors prepared the vessels for the return voyage to England. The sight taunted the colonists because the captain refused to let them back on board or to take them farther north, saying it was too late in the summer. And now it was too late to plant the food that would help them survive the winter. They were stuck. And they were in dire trouble.

A sound came from the hut and Ananias snapped to attention. A tired smile covered Agnes’s face when she stuck her head out the flimsy door. “You can come in and see them now.”

Ananias took a deep breath before ducking his head and entering the sweltering shelter. His wife Elinor lay in the bed, her head slightly propped up. She held a wrapped bundle to her chest.

The corners of her mouth lifted slightly at his entrance, her face pale from exhaustion and physical exertion. The delivery had not been an easy one, and the sight of her sent relief rushing through his body.

“Do you want to see her?” Elinor murmured. There was no apology in her voice. They had discussed the possibility of a girl, and even though most parents coveted boys, especially in this rough and foreign land, Ananias thought all children were a blessing from God, no matter their sex.

A lump lodged in his throat as he sat on the edge of the makeshift bed, straw poking the backs of his legs. Elinor pulled back the linen to reveal a tiny red face, her cheeks puffy and her head slightly pointed. The shape of her crown ignited worry, but his wife laid her delicate hand on his arm. “The shape is no need for concern. Agnes says it is elongated from the extended labor and will soon become normal.”

Ananias nodded, relieved. Tears burned his eyes as he reached his hand toward the babe’s face.

A single tear slid down her cheek.

Ananias’s chest burned with a joy he had never known. God had blessed him with a beautiful, loving wife and now a child. Inside this stuffy hut, his world was a cocoon of happiness. But he couldn’t forget what lay in wait outside the door. Their new world was one of hardship and pain. He would allow himself this moment of pure joy, for who knew if he’d experience it again in this lifetime, as long or as short as that might be.

He caressed his wife’s cheek, his fingertips trailing over her soft skin. “Are you well? The labor took so long… I worried…”

She reached up and pulled his face to hers. “I am well. Just very, very tired.”

Ananias kissed her lightly, as though she might break if he pressed too hard. “You and this child are the most important things to me in the world. I’ll do
anything
to protect you.”

“I know,” she murmured softly. “And it makes me love you even more.”

“What do you wish to name her?” he asked.

She closed her eyes, and he worried for a moment that her exhaustion had rendered her unconscious, but she smiled slightly. “Virginia. I want to name her after her new home.”

If naming her after this godforsaken land brought them luck, Ananias was all for it, but he worried the opposite might be true. Would it bring her doom? No matter, for he could refuse his wife nothing.

Coming to the New World had been proof of that.

Shouts arose outside, and Ananias nearly jumped off the bed, ready to protect his new family of three, but when the door pushed open, his father-in-law’s face appeared in the light-filled crack. “You have born the babe?”

“Aye,” Elinor smiled. “You now have a granddaughter.”

John turned his back to them, facing the crowd outside their home. “I’m a grandfather!”

Cheers and whistles filled the air in celebration, despite the fact that everyone already knew. With boredom and exhaustion as their common companions, the colonists devoured new information within minutes.

John remained outside the door as his friends expressed their well wishes to the governor. When he ducked through the doorway into the shelter, his presence consumed the small space that had been built to hold less than a handful of people. “May I see her?”

Elinor nodded and handed the baby to Ananias. He gathered his daughter gently in his arms. Virginia’s eyes were closed as she slept, probably worn out from the journey she had taken. As he cradled her close, love washed through him, tightening his chest so much it was difficult to breathe. This child was his blood, his hope of a legacy.

John reached for the baby, but Ananias hesitated, wariness spiking the hairs on his arms.

Together, Ananias and Elinor had created a precious life, and it was up to him to do everything in his power to protect her. He suddenly worried that he might need to protect her from her grandfather.

Elinor noticed his hesitation. “Go on, Ananias. Hand Virginia over.”

Ananias chided himself. This child was John White’s legacy as well, and there was no good reason for him to deny his wife’s request. He placed the sleeping babe in his father-in-law’s outstretched arms.

John looked down at his granddaughter. “You have named her Virginia?”

“Does this please you, Father?” Ananias heard the anxiety in Elinor’s voice.