Read To the Brink and Back: India’s 1991 Story Online 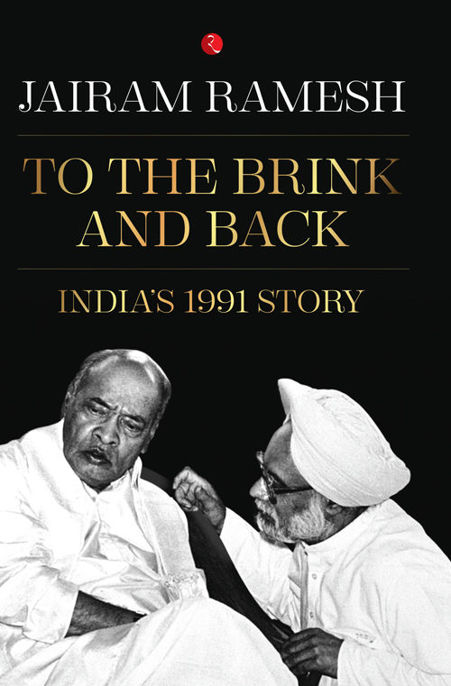 TO THE BRINK
AND BACK

Other Books by Jairam Ramesh

Legislating for Justice: The Making of the 2013 Land Acquisition Law
(co-author)

The copyright for the cartoons by R.K. Laxman vests
with RK IPR Management Limited. Reproduced with permission.

The views and opinions expressed in this book are the author’s own and the facts
are as reported by him which have been verified to the extent possible,
and the publishers are not in any way liable for the same.

No part of this publication may be reproduced, transmitted,
or stored in a retrieval system, in any form or by any means,
electronic, mechanical, photocopying, recording or otherwise,
without the prior permission of the publisher.

This book is sold subject to the condition that it shall not,
by way of trade or otherwise, be lent, resold, hired out, or otherwise circulated,
without the publisher’s prior consent, in any form of binding or cover
other than that in which it is published.

3.  The Inevitability of Dr Manmohan Singh as Finance Minister

4.  The Flap on the Roll-back of Prices

12.  The Curious Case of the Prime Minister’s 9 July Speech

17.  The First Review by the Finance Minister

A Note of Thanks

or around ninety days, beginning 3 June 1991, I was catapulted into a ringside seat, as Indian economic policy was being transformed. As an aide to P.V. Narasimha Rao—first as he took over
as Congress president and thereafter, in the days immediately after he became the prime minister of India—I witnessed profound changes in the trinity of industrial, trade and fiscal policies. I had a Sherpa’s role in the design of some of these changes, particularly as they related to industrial policy. This book is based on my own recollections, conversations with some key players in that drama, written records like parliament debates
1
that are not available easily, contemporary newspaper accounts based on official briefings, hitherto unpublished material from Narasimha Rao’s archives, minutes of key Congress meetings, along with my own personal notes and papers from that period. The book, therefore, is a personal story, one ‘participant-observer’s’ narrative of the action-packed days of June, July and August 1991, during which time dramatic steps to liberalize and globalize the Indian economy were taken.
2

To be sure, there had been earlier attempts at reforms. The first two years of
Rajiv Gandhi’s tenure (1985-87) as prime minister saw a flurry of initiatives to give greater incentives to the private sector to expand. Some economists have written that the growth turnaround of the 1990s and thereafter is anchored in these initiatives. Earlier,
Indira Gandhi herself had cautiously begun the process of giving a new direction to regulations when she set up the
Economic Administration Reforms Commission under the chairmanship of
L.K. Jha; a committee to examine the principles of a possible shift away from physical to financial control under the chairmanship of
M. Narasimham; and a committee for restructuring the public sector with
Dr Arjun Sengupta as its head. India’s first major reform that partially decontrolled the cement industry took place in 1982. Earlier, in May 1979, the Committee on Controls and Subsidies set up by the Morarji Desai government under the chairmanship of Vadilal Dagli submitted its report. Going back even further in time, following the hugely controversial devaluation of June 1966, new measures to attract
foreign capital had been announced.

What Rajiv Gandhi began in January 1985 was very important; the process of systematic unshackling undoubtedly started with him. Indeed, in September 1986 he had asked the
Planning Commission to prepare a detailed agenda for
industrial policy reforms. I was entrusted with this task. A comprehensive action plan titled ‘New Industrial Policy Initiatives’ had been prepared (Annexure 1). It had advocated, among other things, a more liberal policy towards foreign investment, a loosening of restrictions on the growth of private companies, and the creation of a regulator for capital markets that was to later result in the Securities and Exchanges Board of India (SEBI). But for some strange reason—perhaps having to do with the fact that the politics of the country changed dramatically in April 1987—that note did not go further, even though it was scheduled to be discussed in a meeting of the full
Planning Commission.

The Title of Temperance (The Adventures of Ichabod Temperance Book 8) by Ichabod Temperance
Microsoft Word - Jenny dreamed by kps
Jordan County by Shelby Foote
The Mermaid in the Basement by Gilbert Morris
Edward's Dilemma by Paul Adan
My Besties: The Come Up by Asia Hill
Euphoria Lane by McCright, Tina Swayzee
Violet: Bride of North Dakota (American Mail-Order Bride 39) by Heather Horrocks
The Rose Throne by Mette Ivie Harrison
The Essence of the Thing by Madeleine St John