Tom Swift and His Cosmotron Express 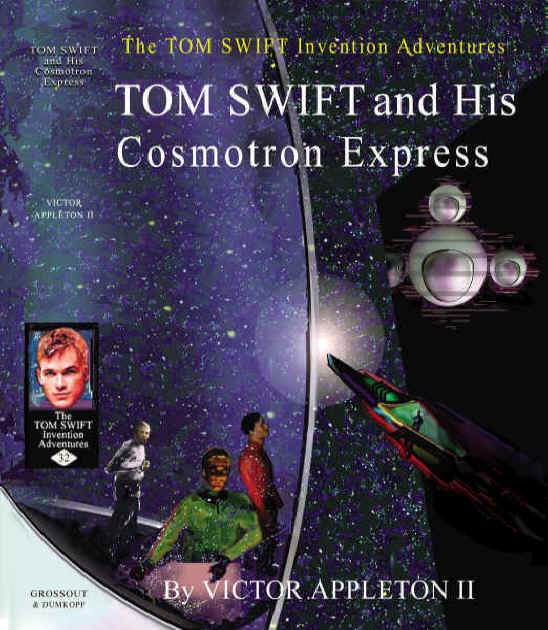 AND HIS COSMOTRON EXPRESS

This unauthorized tribute is based upon the original TOM SWIFT JR. characters.

As of this printing, copyright to The New TOM SWIFT Jr. Adventures is owned by SIMON & SCHUSTER

CHAPTER 1
RAIN BENEATH THE SEA

"A SPACE trip starting down under the sea," remarked Bud Barclay with his usual humorous skepticism. Brushing the curl of a dark lock off his forehead, he gave his pal Tom Swift a sidelong glance. "Offhand it doesn’t seem quite right, Skipper."

Tom grinned. "A space
ship
, not a space
trip
. The trip comes later."

Tom knew how much his best friend thrilled at the thought of once again boldly going on a trek in the starlit void. "You know how quickly we manage to make history around here, flyboy. Give us a few weeks to turn this big bubble into one big dream of a spaceship."

"An express," nodded the dark-haired Californian. "An express to the stars—or at least a few planets in our own measly solar system."

The two stood with a handful of Swift Enterprises technicians and engineers on the seafloor near tiny Fearing Island, Enterprises’ leased sea- and spaceport off the coast of Georgia. They were dry amid the greenish gloom of shallow waters and curious fish, surrounded and protected by a domelike bubble that held back the sea, a bubble of air sustained by one of Tom’s greatest inventions, his matter-repelling repelatron.

The repelatron had become commonplace in the young prodigy’s fantastic projects ever since he had invented it to make possible his deep-sea hydrodome. In a repelatron-driven spaceship, the
Challenger
, he had traveled to the moon and to Venus. Now he was engaged in constructing a new mammoth vessel that made use of an entirely different form of propulsion. His Cosmotron Express, named the
Starward
, already had its maiden flight in view—an historic grand tour of the outer planets of the solar system!

Standing next to his friends, chief engineer Hank Sterling shared his young boss’s grin. "Big deal!—starting off for space from inside a bubble. Didn’t somebody say that a journey of a thousand miles starts with a single step?"

But Bud well understood the importance of the present step. The repelatron bubble, which was presently truncated by the seafloor but would eventually rise upward into full spherical form, provided a mold for the casting of the enormous globe that would constitute the encompassing shell of the body of the ship. Tom had explained—via his customary
well-Bud
explanation—how a new invention would make use of the bubble’s curving water-walls to shape and stabilize the transparent sphere that would encapsulate the
Starward
. "The matter-caster is something like a combination 3-D telejector and the device on the sprectromarine selector that uses a spacewave ‘bounceback’ to convey loose molecules into the spectrosel’s processing apparatus. Remember?"

"Absolutely. It saved my skin—literally!"

"But in this case it works in the opposite direction. We’re propelling a molecular spray of our chosen material—metallumin, in this case—along a controllable scanning beam that allows us to ‘sculpt’ it at the point of reflection, the wall of the bubble. The natural spherical form of the repelatron bubble makes the operation especially easy."

"C’mon, flyboy, that makes it sound kind of
prosaic
."

The unburst bubble in which they stood was like the top quarter of a sphere. In the exact center a metal pylon rose from the seabed on a broad base, topped with a cluster of gunlike tubes. This emitter apparatus was in rapid rotation as it projected its molecular spray at the topmost part of the sea-bubble, working its way down gradually. "We’d better get out of range," remarked Bud, "before the sprayer starts aiming at the ground-level wall."

"You don’t care to be coated in metallumin?" joked Hank. "It’s transparent, you know."

Tom added, "Don’t worry. Rather than lower the emitter-head, we raise the rest of the bubble up out of the ground. By the time it’s a complete sphere, we’ll be back in the
Deepwing
." The young inventor was referring to the big submersible that had delivered the work team and the equipment to the underwater site, a plus-size version of his diving seacopter called a mantacopter.

Tom’s comment caused Bud to glance idly toward the
Deepwing
, parked on the seafloor just beyond the airspace. "Hey," he said mildly, "what’s with Slattery?" Dirk Slattery, the manta’s co-pilot, was waving broadly and frantically through the curving viewpane.

One of the engineers, Jack McManus, waved back at his friend. "Guess Dirk had too much coffee back on the island."

But Tom felt an instant zing of alarm. "He’s not just high-spirited, guys. He wants us to make for the ship. Something’s wrong!"

As the group stood uncertainly, Dirk vanished from the viewport, reappearing a moment later at the open personnel hatch, which protruded a few feet into the airspace. "
Get in here! Run! I just got a call
—"

A loud thud, a forceful slap against the still-soggy earth, made the group flinch as one. "What in the seven seas—?" began Hank, startled.

"Something’s fallen through the bubble wall," said Bud, pointing at a small object lying on the wet, squishy ground twenty paces distant. A cloud of steam was rising fiercely on all sides. It glowed and sputtered with intense heat!

Tom looked up. "Good night, more of ’em!" he gasped. Small rounded objects, about the size of baseballs, were raining down from above! "The Inertite filament-barrier can’t hold them back, whatever they are. Run for the ship!"

"Skipper, they’ll wreck the matter-caster!" exclaimed Bud. The objects were already clanging against the pylon and the emitter mechanism.

The group ran for the hatchway, Tom shepherding them from the rear. As he bolted into the
Deepwing
, Slattery swung down the hatch and activated its sealing mechanism. "We’re all inside," he declared breathlessly. "The hull is taking some hits—you can hear it—but nothing’s getting through."

"It’d take
quite
a weapon to get through
this
hull," responded Tom. "She can handle the pressure of three miles of stacked ocean."

"You said...
weapon
," noted veteran submariner Zimby Cox. "I guess there’s no doubt. It couldn’t be a natural phenomenon."

Bud asked, "Could it be wreckage from something on the surface? Jetz, maybe a plane exploded!"

"At least they’re not exploding."

As the group hastened toward the control compartment, Slattery explained that he had received an urgent aquarad call from Fearing Island only minutes before. "Their radar showed some kind of something zooming way low over the waves at supersonic speed! From outta nowhere, Tom. Before they could scramble the defense system, it was already over the horizon—but they could tell that it had dropped something—a
lotta
somethings!—right over the worksite."

"Shall we surface?" asked Zimby.

"No," said Tom, voice tense. "Forcing us to surface may be the whole idea. Back us away about one hundred feet, Zim. The water’ll keep us safe from anything happening in the bubble, and we’ll still be in range for the Eye-Spy camera."

As the
Deepwing
maneuvered away, Jack McManus reported that the bizarre "rain" appeared to have exhausted itself. "Nothing more on sonar. Unless they come back with another load, I guess we’re in the clear."

From what he hoped was a safe distance, Tom trained his penetrating electronic camera on the interior of the bubble, zooming in and focusing on one of the objects. A dark, rounded shape appeared on the monitor. "Turn on the look-through function," urged Bud excitedly. "Let’s eye-spy what’s inside it!"

"That’s exactly what we
are
seeing, pal," was the response. "They’re completely solid all the way through." Tom activated a panoply of sensor instruments. "Good grief, they’re basically slugs of
depleted uranium!
No wonder they fell through the water so fast—and made a real thud!"

"depleted uranium," repeated Hank. "As is used in super-cannons. But these things weren’t fired from a cannon."

"No," said Bud wryly, "just dropped on our heads!"

"Hold steady, Zimby," Tom ordered quietly. "I’m going out in a Fat Man to retrieve one of the slugs that fell outside the dome. Let’s see what we’re dealing with."

Using the ion diverjets built into the egg-shaped Fat Man, Tom soared away from the manta, landing nearby in a cloud of seafloor particles that whirled and glittered in the
Deepwing
’s aqualamps. The powerful mechanical muscles of Enterprises’ one-man sub-suit had no difficulty handling the dense, heavy metal slugs. "But I’ll have to walk back," sonophoned the young inventor. "Gosh, just
one
is so heavy the Fat Man’s feet are sinking down into the sand."

Back aboard, in bright light, the purpose of the slug became obvious. "Covered with writing," muttered Hank. "I’ll bet all the slugs say the same thing."

Bud snorted. "Heck of a way to send a message."

Zimby seconded the snort. "Sure got our attention, though."

"It’s not English," commented Dirk. "What language is it in?"

"That’s Cyrillic writing," Tom replied thoughtfully. "Let’s plug into the Net and see if we can get a quick translation."

Surfacing and connecting to the internet, Tom scanned the lettering into a powerful Optical Character Recognition application and accessed a comprehensive translation website. In moments he had an answer. "It’s Brungarian," he said. "I thought as much."

He read the message aloud.

TOM SWIFT, YOU HAVE NO RIGHT TO INTERFERE IN THE INTERNAL AFFAIRS OF BRUNGARIA. YOU ARE A PUPPET OF THE TRAITOR GOVERNMENT AND WE WILL DEFEAT YOU WITHOUT FAIL. DO NOT THINK YOU HAVE MADE US WEAK. RETURN ALL YOU HAVE STOLEN OR THE PENALTY WILL BE UNBEARABLE!

"Brungaria," Tom said, as if the word were ominous. He added dryly, "Nowadays they’re supposed to be our friends."

"Some friends!" retorted Bud. "Just a quick drop-by to deliver a death threat!"

"THE WORKSITE is secure," Dirk reported presently. "We’ve got landing-forcer drones circling above."

"But I have to wonder—would our drones have any effect on that weird craft of theirs?" Tom mused. "Sounds like it has performance capabilities beyond anything we have. Even the cycloplane!" As an afterthought, Tom aquaradded Island Security to provide an Enterprises jetmarine to keep watch over the repelatron bubble, and for a seacopter work team to remove the remaining uranium slugs and assess the damage to the matter-caster. "If they were only delivering their ‘message’, they may not intend to wreck the construction project. They may not even know what we’re doing down there."

"Rrrrrright," replied Bud with oozing skepticism. "I’m sleeping better already." History justified the youth’s wry attitude. Since becoming Tom Swift’s closest friend, Bud’s life had been put on the line time and again by the strange adversaries Tom and his inventions seemed to attract, as if by static cling. Most recently, as Tom was perfecting his dyna-4 capsule apparatus in Nevada, it was Bud who had staved off death from a bullet aimed at the young inventor. What kind of dangers were they doomed to face in Tom’s Cosmotron Express? Enemies on Earth—or in space?

The mantacopter skimmed the waves on its cushion of air, settling down at the Fearing submersibles dock in less than a minute. Tom, Bud, and Hank hastened to the Security office to hear whatever details Mace Vendiablo, the security chief, might have pried from the incident.