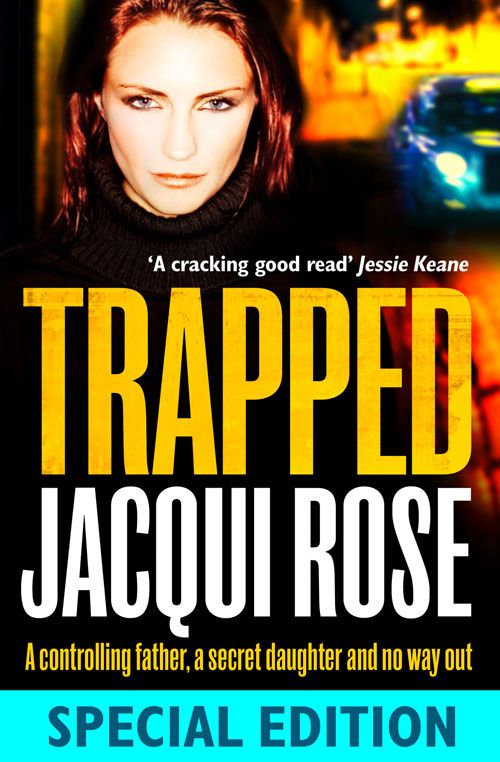 To my daughter Georgia, whose courage, pain and love inspired and embodies the character of Maggie. This one’s for you.

We’ve added geo-location features to this ebook to give you a glimpse of some of the real-life places involved in the novel.

Each time you see a place name shaded like
Ronnie Scott’s Jazz Club
, below, you can look at that place in more detail. To access the feature, simply click on the name and you’ll be taken to an image of that location.

To return to where you were reading previously, simply click ‘
back to the text
’.

However, if you would like to explore the location’s real-world position in more detail, click on the image. This will take you to an online map client where you can explore further.

To return to your book from here, simply re-load your book app.

The journey I took whilst writing
Trapped
was an altogether different one to anything I’d ever experienced. It was the beginning of a new dawn. A closing of the door on a long, difficult chapter of my life and my children’s lives. A time when I had to learn to put my trust wholly in others. A time when it felt I was freefalling though in my heart I knew there’d be someone to catch me this time, and it was for these reasons I wrote this book.

I want to acknowledge the bravery of my children; to thank them for their love and the way they continue to soar and fly. My deepest thanks also to my friends and family for their continuing and unwavering support.

Thank you to my new and amazing editor, Caroline Hogg, whose patience, invaluable help (and steak dinners) guided this story into the finished novel. A big shout out to Keshini for all her help. A massive thanks to Judith Murdoch, the best agent in town, who continues to point me in the right direction and always has my best interest at heart. Thanks to the team at Avon who are, quite simply, wonderful.

Lastly, an everlasting thanks to DS Gavin Popplewell for his professionalism, his sensitivity and for his support in some of the darkest and bleakest of times. Thank you.

I’d also like to thank PC Vicky Siddall for her invaluable support and care when it mattered the most.

‘Bleedin’ hell.’ Maggie Donaldson swore loudly as she jumped out of the way, narrowly avoiding being hit by the china teacup which came whizzing past her head as she opened the front door. She watched, slightly bemused, as it smashed against the garish lamp in the corner and tiny fragments of blue china showered down.

Using the back of her red scuffed heel to shut the battered front door, Maggie’s confusion slowly turned to anger as she looked around the gloomy hallway, listening to the raised voices. She sighed loudly.

She’d been away for just over a year and somehow during that time she’d convinced herself things would be different. It had been stupid to do so. Violence in her family was like a thirst; as recurrent and necessary as other people’s cups of morning tea.

How many times as a child had she cowered in bed listening to the screaming arguments? The crying and the slamming of doors, before she’d made sure the coast was clear to creep downstairs to comfort and tend to her mother’s injuries.

The brutality hadn’t just stopped there. It had touched everyone with sadistic cruelty, twisting and coiling itself around the heart of her family. Maggie could count on one hand the times she’d been hugged as a kid but she’d lost count of the number of black eyes she and her siblings had received growing up in the Donaldson household.

She’d only managed to survive her mother’s visits to casualty, her father’s drunken rows and the daily terror she’d seen in her siblings’ eyes by having hope; hope that one day it’d all come to an end. But as Maggie Laura Donaldson looked at the discoloured silver cutlery strewn all over the floor with the mismatched tea set thrown about the hall like hand grenades in a battlefield, it told her all she needed to know. Her hopes had once again been as taunting and hollow as ever. Only a miracle could change things – and Maggie knew miracles didn’t happen in the Donaldson household: not even small ones.

Standing with weary resignation in the newly painted kitchen doorway, Maggie watched as her father – armed to throw another porcelain bomb at her retreating mother – spat out his venomous words. ‘Jaysus fucking Christ, Sheila, if it’s the last thing I do, I’ll put you in your grave. I’ll happily do time for you. Look at me like that again and see what happens. I swear on the Virgin Mary, I’ll …’

Interrupting her father’s furious rant, Maggie spoke. Her voice was filled with the icy, hard edge she’d learnt from him. ‘Hello, Dad. This is a nice welcome home ain’t it? It’s good to see nothing changes. Home sweet home, eh?’

Max Donaldson turned abruptly to stare at his daughter. His bloated red face showed a flicker of surprise before it turned into a familiar veil of scorn.

As he met her gaze, he noticed how much thinner Maggie’s face looked from the last time he’d seen her. Her eyes had a distant look about them which hadn’t been there before; but however worn out she looked, it could never detract from her beauty.

Her long auburn hair tumbled down in lustrous waves to the middle of her back. Her skin was flawless and pale. Her piercing blue eyes – a throwback from her Irish heritage – were mesmerizing. Where she got her looks from, Max didn’t know. He knew he was no Rembrandt and as far as he was concerned his wife’s looks were more in keeping with the living dead. Enough to frighten the devil himself.

As startling as Maggie’s beauty was though, it didn’t blind him as it did others. When he looked at his daughter he saw her for what she was. A cheeky mare who’d always had too much lip and bravado. The hundreds of beatings he’d given her hadn’t done anything to curtail her air of arrogance. If anything, with every thrashing, with every bust lip she’d ever had at Max’s hand, her sense of superiority and disdain towards him had grown.

Looking back, Max couldn’t remember a time he’d seen her cry, in stark contrast to her brothers, who’d done his nut in by wailing for hours on end when he’d raised his fists to them. Maggie had taken the punishments he’d dished out to her in silent martyrdom. There’d been no tears, no screams, just her huge piercing blue eyes sadly gazing up at him; serving only to infuriate and double the severity of her beatings.

There was something about his daughter – though he’d never admit it to anyone, he even struggled to admit it to himself – which made him feel uneasy. He’d almost go as far as saying she made him feel ashamed of who and what he was. And because of these feelings he harboured inside him, that lodged in at the back of his throat like bile, Max Donaldson hated his daughter, Maggie. Putting down the fruit bowl he was about to throw at his wife, Max addressed Maggie with sneering contempt.

‘Saints and mothers preserve us, look what the fucking cat’s dragged in. I thought there was a nasty smell.’

The words slashed out at Maggie and it hurt. It always had. It was all she’d ever known from her father but somehow she’d never learnt to shield herself from his words as she’d done his fists; they continually managed to wound.

Sometimes the pain of his words became so great, it felt as if she was going to pass out, but like Max, when it came to her feelings, Maggie Donaldson was stubborn and proud. She’d rather put her fingers in a vice than ever let her father know that his verbal ill-treatment injured her more than any mouthful of knuckles or black eyes ever could.

Expertly, Maggie pushed the pain to one side, drawing up the protective wall she’d had to build throughout her life.

‘Never one to disappoint are you, Dad? God knows what would actually happen if you managed to say “hello” after not seeing me for a year. It’d be like the Second Coming.’

‘Oh please, you’ll have me running to the bog to shit out the crap you’re talking. You expect me to roll out the red carpet when you got yourself into the mess in the first place?’

Max snorted. ‘You must think you’re the Queen of Sheba. Take off that pair of big fucking boots you’re wearing before they kick you in the arse.’

Deception (Dirty Secrets #2) by Mercy Amare
The Old Axolotl: Hardware Dreams by Jacek Dukaj
A Most Unusual Mistress (Rogue Scandals) by McAllan, Raven
The Woman Who Wasn’t There by Robin Gaby Fisher, Angelo J. Guglielmo, Jr.
In Her Shadow by Louise Douglas
Friends with Benefits by Melody Mayer
Covert by Carolyn McCray
A Rare Ruby by Dee Williams
The Life and Legacy of Annie Oakley by Glenda Riley
Honesty by Viola Rivard