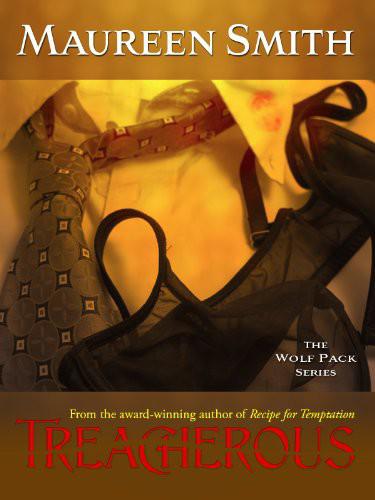 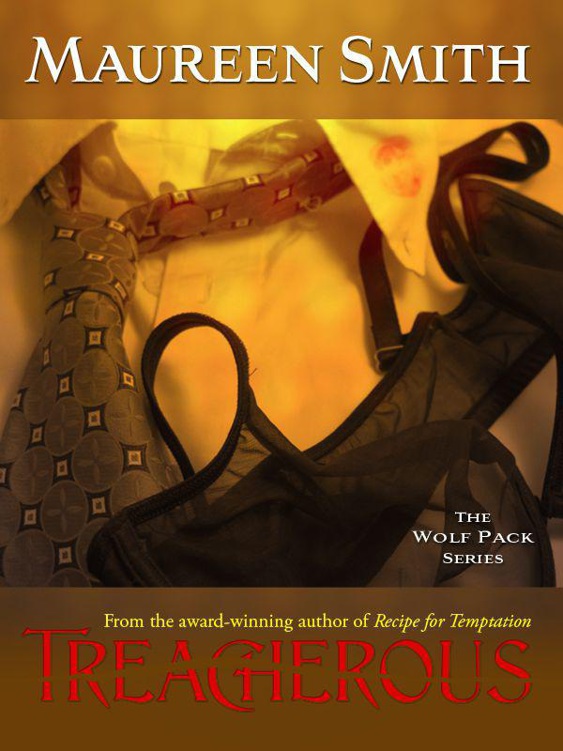 A Novella by Maureen Smith

Al rights reserved. Except for use in any review, the reproduction or utilization of this work in whole or in part in any form by any electronic, mechanical or other means, now know or hereafter invented, including xerography, photocopying and recording, or in any information storage or retrieval system, is forbidden without the written permission of the author.

This is a work of fiction. Names, characters, places and incidents are either the product of the author’s imagination or are used factiously, and any resemblance to actual persons, living or dead, business establishments, events or locales is entirely coincidental.

For questions and comments about the book, please contact [email protected]

In 2007 you were introduced to the Wolf Pack in my novel,
Taming the Wolf
, which was followed by
Recipe for Temptation
and
Tempt Me at Midnight
.

As a reader, I’ve always enjoyed connected stories that allow me to follow the lives of characters I’ve grown to love like my own family. Do you know what else I enjoy? Books that take me back to the beginning of a family saga.

So without further ado, I bring you the untold story of Sterling and Celeste Wolf.

As always, I love to hear from readers. Please share your thoughts with me at [email protected]

Until next time, happy reading! 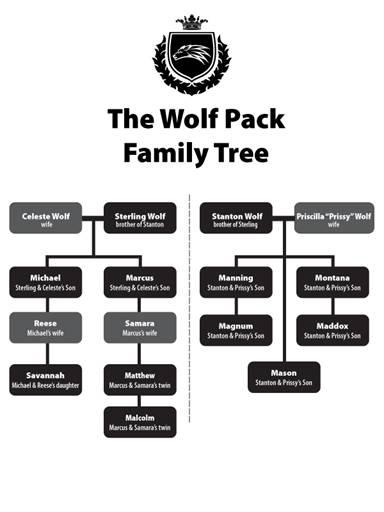 “Are we almost there?” Marcus Wolf asked anxiously.

Sprawled beside his brother in the backseat of the family’s old Volvo, Michael warned, “If you ask that question
one
more time, I’m gonna shove my foot up your—”

“Michael!” his mother scolded, whipping around in her seat to glare at him.

“That’s no way to talk to your brother.”

“Sorry, Ma,” Michael grumbled, “but he’s getting on my nerves. It’s only been ten minutes since he asked if we were almost at Mama Wolf’s house.”

“So what?” Marcus retorted. “I wasn’t talking to
you
. Anyway, you’re just in a bad mood ’cause Kiara likes Quentin instead of you.”

“
What?
”
Michael sputtered indignantly. “Boy, you don’t know what you’re talking about!”

You’ve been bickering ever since we left home, and I’m getting sick and tired of it. I don’t want to hear another word out of either of you until we get to your great-grandmother’s house. Do you understand me?”

“Good.” Celeste turned around in her seat, wearily pinching the bridge of her nose between her thumb and forefinger. “Great,” she muttered under her breath. “Now I’ve got a headache.”

Sterling reached over and gently cradled her cheek in his hand. “You can lie down and rest when we get there.”

She snorted. “How am I supposed to do that with your brother’s five sons stampeding through the house?”

“Not
that
late. Besides, you know those boys never go to sleep, especially when they’re waiting for Michael and Marcus to get there.” She sighed, leaning back against the headrest and closing her eyes. “It’s going to be a madhouse.

Nobody’s
getting any sleep tonight.”

Sterling grinned. “I wasn’t planning to,” he said suggestively, for her ears only. “And neither should you.”

A ghost of a smile curved Celeste’s lips. “If you think we’re doing
that
in a houseful of people, think again.”

She was a beautiful, petite woman with shoulder-length black hair, a café au lait complexion, and eyes the color of cinnamon. She kept herself in great shape by making use of her exercise tapes and the treadmill she’d bought from one of her coworkers. Since she was a health-conscious nurse, she often tried to prepare nutritious meals for the family. But it was hard to keep the cabinets stocked with all-natural foods on a tight budget, which frustrated her—along with many other things about her life.

As silence lapsed between them, Sterling glanced in the rearview mirror at their two sons. They sat at opposite ends of the backseat, as far apart as they could get without being in separate cars. Both had their arms crossed as they stared broodingly out the window. Watching them, Sterling felt a sharp pang of guilt. Michael and Marcus looked forward to this trip every summer, but so far it was getting off to a rocky start. First they’d had to stew in rush hour traffic on their way out of Atlanta because Celeste hadn’t gotten off from work on time.

Once they were on the interstate, they’d gotten a flat and had to pull over to the side of the road. While Michael assisted Sterling with changing the tire, Celeste had insisted that she and Marcus keep a safe distance from the disabled car, which Marcus hadn’t appreciated.

“Why can’t
I
help change the tire?” he’d complained. “I’m ten years old, but you guys still treat me like a baby.”

“That’s because you
are
a baby,” Michael had retorted, tossing a grease-stained rag at his brother’s scowling face.

They’d been at each other’s throats ever since.

It was unusual for Michael and Marcus not to get along. Although they were six years apart, they were closer than any two brothers could be. They played basketball together, shared secrets, and always looked out for each other. So Sterling knew there was more to their bickering than Michael moping over a girl, or Marcus feeling slighted over a flat tire. His instincts told him that the boys were reacting to the tension they sensed between their parents.

Things had been strained between Sterling and Celeste for the past several months. Between her pulling double shifts at the hospital and him working overtime on tough homicide cases, they’d become the proverbial ships passing in the night. If they weren’t discussing one of their children or arguing over an unpaid bill, they didn’t have much to say to each other. Which was why this trip couldn’t have come at a better time. Something about being in the country—

breathing in the fresh air, relaxing on the porch after dinner, going for leisurely walks—had a therapeutic effect on everyone. No matter what was happening before they left home, the family always returned from Savannah feeling well rested and rejuvenated.

For the next five days, Sterling wanted Celeste to forget about their mounting debt, the demands of her job, the declining state of their neighborhood—all the things that depressed her. He wanted her to let her hair down and relax. If they could just spend some quality time together, he reasoned, then maybe they could mend what was broken in their relationship.

Because something was definitely broken. And had been for a while.

He glanced over at Celeste. She was staring out the window, lost in thought.

It was as if she were there in body, but not in spirit.

Sterling knew that she’d been reluctant to go on vacation. A few days ago she’d told him that things were busy at work, and she hated leaving the other nurses short-handed. But he’d overrode her objections, telling her that the hospital could survive without her for a week, just as his homicide investigations would be waiting for him when he got back. She hadn’t put up any more protests, but now as he watched her, Sterling wondered whether she resented him for making her come on the trip. She’d spoken very little to him since they left home, and she’d been uncharacteristically testy with Michael and Marcus.

But Sterling wasn’t going to apologize for insisting that she accompany them to Savannah. They needed this time together as a family, and he and Celeste needed to reconnect as husband and wife. Because they were drifting apart, and if something didn’t change soon, he honestly didn’t know how much longer their marriage could survive.

Night had fallen by the time they arrived at Sterling’s grandmother’s house.

The large Queen Anne, with its decorative roof and rounded turrets, had been in his family for generations. He and his younger brother, Stanton, had been coming there every summer since they were born. After their parents died one August while Sterling and Stanton were visiting Savannah, Mama Wolf had unselfishly uprooted herself, moving to Atlanta to take care of her orphaned grandchildren until they both graduated from high school.

As Sterling pulled into the driveway behind Stanton’s rental van, a small figure burst from the house and dashed down the porch steps, announcing excitedly,

From the backseat, Michael and Marcus laughed. “He sounds like Tattoo from
Fantasy Island
,” they joked.

Sterling and Celeste chuckled fondly as six-year-old Mason Wolf raced to the back of the Volvo and eagerly pressed his face to the glass, beaming at his older cousins.

Soon Stanton and the rest of his sons emerged from the house and gathered on the wraparound porch. Broad grins wreathed their handsome faces, which were so strikingly similar there was no doubt that the same blood ran through their veins.

“About time you folks got here,” Stanton called out as Sterling and his family climbed out of the car. “You were supposed to be here hours ago.”

“Better late than never,” Sterling quipped, then scooped his youngest nephew into his arms and swung him around. “Boy, you’re getting so big!”

“I just bet you are.” Grinning, Sterling kissed the top of the boy’s head and set him down as they were joined by Stanton, Manning, Montana, Magnum, and Maddox. They all exchanged hearty back slaps and hugs and affectionate banter.

Watching the boisterous reunion, Celeste smiled wryly and said, “I’m feeling outnumbered by all this testosterone. Where’s your wife, Stan?” He flashed his megawatt grin at her. “She and Mama Wolf walked down the street to deliver some food to Mrs. Abney. They hoped they’d be back before you guys arrived, but knowing how much Mrs. Abney likes to talk, they might be there for a while.” He chuckled, nudging his brother. “Hey, Sterl, remember how we used to get stuck over at her house for hours, choking down her dry sugar cookies and listening to her childhood stories?”

Even back then she seemed ancient to us. This place wouldn’t be the same without her.”

Celeste smiled at them. “I need to use the bathroom, so I’ll leave you fellas to your reminiscing.” She glanced over at Michael and Marcus, who were roughhousing with their cousins. “Y’all bring our bags inside the house.”

The Convenient Wife (A BWWM Steamy Marriage of Convenience Romance) by Imani King
Frigid by Jennifer L. Armentrout
Chestnut Street by Maeve Binchy
Our Chance by Natasha Preston
Hero by Rhonda Byrne
This is Not a Novel by David Markson
The Merman and the Barbarian Pirate by Kay Berrisford
Charlotte Boyett-Compo- WIND VERSE- Pleasure's Foehn by Charlotte Boyett-Compo
Red Dog Saloon by R.D. Sherrill
The Ancient Breed by David Brookover