Read Valerie and Her Week of Wonders Online

Valerie and Her Week of Wonders 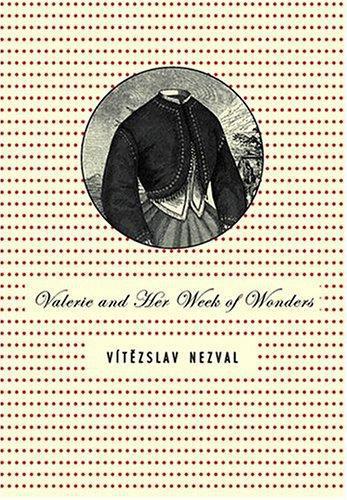 Valerie and Her Week of Wonders

Translated from the Czech by David Short

Copyright © 1945, 2005 by Estate of Vítězslav Nezval
English translation copyright © 2005 by David Short
Illustration copyright © 1945, 2005 by Estate of Kamil Lhoták
This edition copyright © 2005 by Twisted Spoon Press
All rights reserved. This book, or parts thereof, may not be used or reproduced in any form, except in the context of reviews, without written permission from the Publisher.
Originally published in Czech as
Valerie a týden divů
, illustrated by Kamil Lhoták (Prague: F.J. Müller, 1945)
The translation was made possible by a grant from the Ministry of Culture of the Czech Republic.
Cover and frontispiece image by Kamil Lhoták
Design by Jed Slast
First published in English in 2005 by Twisted Spoon Press
P.O. Box 21—Preslova 12, 150 21 Prague 5, Czech Republic
www.twistedspoon.com
ISBN 978-80-86264-19-6 (paperback)
ISBN 978-80-86264-69-1 (e-book)

I wrote this novel out of a love of the mystique in those ancient tales, superstitions and romances, printed in Gothic script, which used to flit before my eyes and declined to convey to me their content. It strikes me that the poetic art is no more and no less than the repayment of old debts to life and to the mystery of life. Not wishing to lead anyone astray by my “Gothic novel” (least of all those who are afraid to look beyond the boundaries of “the present”), I am appealing to those who, like myself, gladly pause at times over the secrets of certain old courtyards, vaults, summer houses and those mental loops which gyrate around the mysterious. If, with this book, I will have given them an evocation of the rare and tenuous sensations which compelled me to write a story that borders on the ridiculous and trite, I shall be satisfied.

Chapter I
A MAGICAL YARD

Valerie, an oil lamp in her hand, entered the yard. The moon was full ... Her bare feet touched the moonlight. She could also detect the scent of the garden. The noise from the poultry was unceasing. With her right hand she clasped her bed jacket to her.

“Who’s up there?” she called and took a step towards the henhouse.

A moth circled the lamp. Then a second, and a third.

“It’s a polecat,” she told herself.

But suddenly she noticed that the yard was unrecognizable.

But the woodshed had also disappeared, and the wall was twice as high as usual. She thought she heard the well winch squeak.

Then she heard the following conversation:

“Where did you put her earrings?”

“But you know I’ve been with you the whole time.”

“When did you stop trusting me, Constable?”

“You’ll be put to the water torture.”

Valerie thought she heard a groan. Involuntarily, she put her right hand to her ear as if to check that her earrings were in place. Both were gone. She stepped up close to the henhouse from where the two arguing voices and the terrified cheeping of the birds were coming. Suddenly a hand reached out towards her lamp, and before she could cry out in horror she felt someone fixing her lost earrings back in place. At once she saw the apple tree and woodshed and the voices fell silent. Her hand fell to her breast. Beneath its gentle curve her heart pounded as if she had run a long way. Why was she holding a lamp when there were so many stars overhead? Not that the lamp could be recognized: swirling about it were moths from all the surrounding gardens. She set it down on the step and sat down herself. Her ears still rang with the voice that had uttered that desperate word: “Tyrant.” And the words about a water torture still clung to her mind.

She took off her right earring and toyed with it. The silence was so intense she could hear the brook running. Somewhere water was dripping. The sound was intolerable, and she shuddered. The hens were sleeping again.

“I’m not going back to bed now,” she said aloud, and leaving the lamp in the doorway, she went to the other end of the yard. The carriage stood there with its hood clipped in place. She sat in it and looked at the sky.

The moon played with her earrings. She saw a ray of light jetting off them onto the carriage hood. She wished she could hear the two bickering voices.

“I wonder what will happen if I take my earrings off.”

“Constable,” she heard the moment the golden ray of light stopped playing in the carriage. “Constable, I confess everything.”

“Who would have thought,” the other man growled, “that Orlík would one day become my sworn enemy.”

“You’re wrong, Constable. Orlík knows he is bound to you by a debt of gratitude.”

“I didn’t know those trinkets meant so much to you.”

“Next time I’ll double the torture.”

Terrified of hearing more, Valerie put her earrings back in.

At that moment, the frightened cries of the chickens came again from the henhouse and the voices continued talking.

“Get down, Orlík, and hold the ladder for me.”

“Fine things you suspect me of, guardian.”

In disbelief Valerie could hear the conversation despite having her earrings in. It made no difference whether she had them in or out, the voices were clearly audible either way.

“Oh well, I’ll get down then, Constable.”

The girl huddled under the carriage hood, and although she was afraid they would find her there, she tilted her head out a little to observe what was happening at the foot of the henhouse. The story was not long in unfolding. A young man, a few inches taller than Valerie, jumped down and donned a straw boater.

“Orlík,” came a voice from above, “stoop over so I can climb down your back.”

“Are you really so weak, Constable?”

“Are you asking for the water torture again?”

That seemed to strike fear in the young man. He stooped, presenting his back to the huge boots of his superior. Then, gradually and gently, he bent lower and Valerie saw a stout man emerge, borne aloft on Orlík’s back beneath the opening of the henhouse. Orlík’s face was concealed from sight, leaving Valerie ample opportunity to inspect the other, who, to judge from what she had heard said, enjoyed unlimited power over the younger man. The moon shone straight into the face of the man descending from the henhouse. It was not a human face. It was the face of a polecat.

“Constable,” said Orlík, “where have you left the birds you strangled?”

But just then the Polecat gave a tug on a string he was holding and, as if it were a truss of partridges, several strangled chickens sprang into Valerie’s sight.

“My speckled hen with the crest is dead,” the girl sighed. She wanted to shout “Thieves!” but her voice stuck in her throat.

The man who let himself be addressed as “Constable” and Orlík strolled across the yard towards the gate, impervious to anything.

But it was too late. The gate had closed and the nocturnal visitors had disappeared among the gardens.

In the distance a cock crowed. Then a second, and a third.

“Orlík,” Valerie said to herself.

She stretched out in the carriage as if on a bed and began to inspect her bare feet in the moonlight.

As she was examining them, she felt that a tiny spider was spinning a thread down the inner side of her thigh. She raised her eyes to the sky and thought no more of the unusual sensation.

“Orlík is seventeen,” she said in spite of herself. But at once added:

Another cock chimed up, answered by two others from far away. But the night remained unchanging. When the girl glanced back towards the door, she saw about ten moths obstinately circling the lamp. She felt the little spider had reached the ankle of her left foot. She glanced down at it and saw to her great dismay a thin stream of blood trickling over her ankle.

“The Polecat,” she shrieked in horror and, leaping out of the carriage, she dashed towards the door.

The moths flew after the lamp as she took it with her to light the way down the long corridor leading to her room.

Somewhere close by a cock crowed.

Valerie flung herself into bed and clamped her fists over her ears to block out the sounds of the vanishing night.

Chapter II
A TALK WITH GRANDMOTHER

“Good morning,” Valerie said next morning to her grandmother, who was back from church and getting breakfast ready in the old dining room, where the table was laid for two.

“When?” the girl asked abstractedly.

“Tomorrow or the day after.”

Grandmother dropped into thought. Then, having consumed a gulp of coffee, she uttered a sentence that seemed to cause her some embarrassment:

“The archpriest is thinking of quartering one of the missionaries with us since there’s not enough room at the rectory.”

Valerie did not reply. She played with an earring until she unhooked it from her ear and, looking at it against the sun, decided the time had come to ask her grandmother a few questions.

“You’re not fiddling with your earring, are you, my child?”

“They were a christening present, weren’t they, Grandma?”

“No, silly, they were your mother’s,” the old woman said in consternation.

“I don’t remember ever seeing her wear them.”

“Of course not, she didn’t wear them.”

“I don’t know whether you’re old enough for me to tell you.”

Grandmother stood up and gazed silently towards the window.

Then she said in agitation:

“All right, let’s not talk about it.”

The old lady was picking up non-existent crumbs from the table. Then, pulling herself together, she said in a trembling voice:

“Your mother set the earrings aside the day she entered the convent.”

“Do you mean a convent school for girls?”

“No. Your mother entered the convent to become a nun.”

Valerie turned pale. She felt as if her throat were contracting and she could not utter a sound.

“It wasn’t just my wish, you know. It was her own decision to make the sacrifice.”

Valerie was amazed she had been born.

“Your father was the Bishop of –. Surely you remember the day he died; we went to his funeral.”

Valerie finally understood the upheaval surrounding the funeral of the Bishop of –, which had turned Grandma’s house upside down. How could she forget the magnificent ceremony, which she had been permitted to attend ten years ago?

“But my mother wasn’t alive by then. I remember that well.”

“No. Nor was your stepfather, the colonel, whose name you bear.”

“I remember him dying suddenly.”

“After a bout of uremia.”

“She died of pernicious anemia.”

The old lady stared at her granddaughter with the words:

“God be praised that you are a young woman at last. I’d been so afraid that you would die. You know, the only reason your mother entered the convent was that we expected her to die, as I’ve been expecting you to. If it weren’t for last night, it would have been my wish that a missionary prepare you for the same path your mother was unable to keep to.”

“Did she take her vows?”

“Is there some special story attached to my earrings?”

“Your grandfather bought them when they were auctioning off the property of a certain constable who used to own this house.”

“Who was that constable?”

“I don’t know much about his story. He seems to have squandered his wealth.”

“Look, Grandma, what a funny parade!” Valerie cried and rushed to the window.