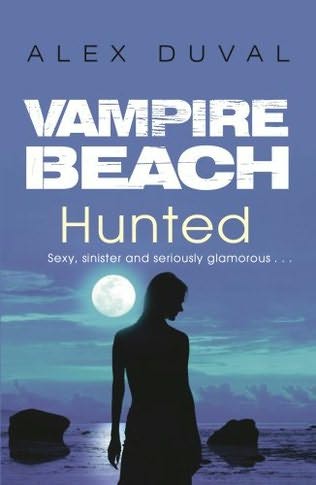 Jason Freeman is torn, wondering which natural wonder is more deserving of his attention – the awesome-looking Malibu surf, or his stunning vampire girlfriend, Sienna Devereux, who is lounging on the beach.

The vampire clique is settling in for a great summer and Jason is looking forward to some sun, sea and sand. But the peace is shattered when vampires start going missing. They reappear – but with no memory of what’s been happening to them. Are the vampires being hunted?

To JN, for all the laughs along the way!

THE SOUND OF
the waves crashing in. The slap of a football being caught in a pair of hands. Girls talking. Guys laughing. Seagulls cawing. A volleyball net flapping in the breeze coming off the ocean. Jason Freeman grinned as he dug his toes deeper into the sun-warmed sand of Surfrider Beach, his eyes closed behind his new Diesel sunglasses. This strip of beach – just your basic paradise – had become his home away from home since he’d moved to Malibu from Michigan at the beginning of his senior year. If someone dropped him on this spot, blindfolded, he’d know it just by the sounds.

That didn’t mean he wouldn’t miss the visuals, because he definitely would. Jason shoved his sunglasses onto the top of his head, then rolled onto his side, giving himself the perfect view of his favorite Surfrider Beach sight – his girlfriend, Sienna Devereux, in one of her many bathing suits, this one a black bikini with a top that tied in a bow in front. That bow made Jason’s fingers itch.

Sienna slid up on one elbow and pulled her big sunglasses down on her nose. She gave him a playful smile, a smile that made him think she could read his mind about that tie.

‘You know exactly what I’m thinking, don’t you?’ Jason asked.

Sienna glanced over to his surfboard, which was jammed in the sand a few feet away. ‘That there are some all-time, classic waves out there and you can’t let them pass you by?’ she asked, widening her eyes with extreme innocence, putting a little surfer-dude spin on her words.

Jason shot a look at the ocean. There
was
some pretty tempting wave action going on out there. He looked back at Sienna. But that bikini bow . . .

How spoiled am I?
he thought.
Sitting here trying to decide between two natural wonders: the Malibu coast and my scorching girlfriend. Answer: so insanely spoiled.
Malibu had been very, very good to him. Even if the place was bursting with vampires.

Or maybe
because
it was. There was one vampire who’d definitely made his life more intense and more exciting – Sienna. Being with her made him feel more alive, even though entering her world had nearly made him dead! He’d been attacked by a crazed vampire consumed with bloodlust, and shot with a crossbow by a vampire hunter. And then there was the Aristocratic French vampire who’d been stalking Sienna’s sister.

And yet in spite of all the near-death experiences, Jason wouldn’t have had his life any other way. Sienna was worth it all. He’d give his life for what they’d already had together, although, ideally, it wouldn’t come to that.

‘Go ahead. Surf if you want to,’ Sienna sighed, settling back to sunbathe.

Jason grinned. ‘No way. I’m not surfing. There are much more exciting things to do right here.’ He moved closer to Sienna – then reached across her and grabbed the copy of
Cosmo
sticking out of her beach bag. ‘I have a lot of reading to catch up on. I haven’t even
started
to study the Body Language Decoder.’ He opened the magazine and locked his gaze on the page, like it was mesmerizing.

‘Decode this,’ Sienna said, plucking the magazine out of his hand and tossing it across the sand.

Jason laughed. Then he kissed her. Teasing Sienna was fun, but kissing her was more fun. Way too soon, she pulled back a little and gazed out across the ocean, her expression thoughtful.

‘What?’ Jason asked, running his fingers down her cheek.

‘Just wondering how many days we’ll have like this, with all of us,’ she answered. She turned toward the beach where most of the guys were playing football and some of the girls were getting up a volleyball game. Her eyes skipped from face to face, taking in all their friends, pretty much all of them vampires, scattered over ‘their’ piece of the beach.

Sienna had just brought up the topic that every senior at DeVere High had been avoiding: life after high school. They were just a breath away from graduation. In the fall, they’d be scattered all over the place at different colleges. Forget fall; they’d start splitting up as soon as high school ended. Everybody had summer plans.

‘All of us, not that many more times,’ Jason admitted. ‘But a lot of us, most of the summer. And the two of us, pretty much constantly. Even in the fall. I’m at CalTech. You’re at UCLA. We’ll practically be room-mates.’

‘And together, we’re going to own L.A.!’ Sienna agreed with a smile, but her dark eyes didn’t have all of their usual sparkle as she looked across at her friends.

‘So you noticed it too. I can see it in your eyes,’ Belle Rémy commented as she grabbed three beers from a nearby cooler and sat down on the other side of Sienna. ‘Do you think we should stage an intervention?’

‘What?’ Sienna asked, staring at her best friend.

‘For Adam,’ Belle answered. ‘Weren’t you watching him about to crash and burn with that girl over there?’ She jerked her chin toward where Adam Turnball and a short, curvy girl wearing cut-off jeans, a flowered bikini top, and what Jason always thought of as ‘smart-chick glasses’ – the ones with the black frames – stood loading fish tacos and chips and salsa onto paper plates.

‘Well, she’s smiling. She doesn’t seem to be attempting to back away,’ Sienna commented.

‘But I heard him use the words Godard, Truffaut and David Lynch in one sentence,’ Belle explained. ‘And he was using the intense voice. You know, the voice that’s one level down from where there’s spittle.’

‘It’s all good,’ said Jason. ‘Well, not the spittle part. But that girl – yes, that cutie – is here as Adam’s date. He invited her here all by himself. Her name’s Brianna Graham and Adam met her at a young filmmakers’ convention. That means that Godard, Truffaut and David Lynch are actual total turn-ons for her,’ Jason explained.

‘Huh. Well, good for my little dating protégé.’ Belle gave a small nod of approval. ‘Maybe someday he’ll be able to flirt with someone who
isn’t
a film freak.’

Michael Van Dyke intercepted a pass and ran the football over to the cooler in time to hear Belle’s analysis of Adam’s love life. ‘No girl who looks like that is a freak,’ he told her. ‘Except for the
good
kind of freak. Know what I’m saying?’

‘Belle, are you going to bring us our beer today or what?’ Maggie called. Her shortie wetsuit glistened in the sun as she took a practice serve over the volleyball net.

Brad Moreau, Sienna’s ex and, kind of surprisingly, the guy who had ended up being one of Jason’s closest friends, trotted up to them, breaking the strained silence that had fallen. ‘Van Dyke, we’re in the middle of a game here,’ he said.

‘I’ve officially called a beer break,’ Van Dyke replied, hoisting the cooler onto one shoulder and trotting toward the football players.

‘Make a stop over here!’ Erin shouted from the other side of the volleyball net. ‘Belle’s deserted us!’ Van Dyke obediently veered in her direction.

‘Listen up, you guys,’ Brad said to Jason, Sienna and Belle. ‘Party tonight at my place.’

Sienna raised one eyebrow. ‘I thought you were going to cut your parents a break and let them have one out-of-town trip where you
didn’t
throw a party,’ she said. ‘Especially since the trip’s for their anniversary and everything.’

‘I was,’ Brad answered. ‘But there’s an epidemic in our town and I feel it’s my responsibility to do something about it. If I don’t provide an outlet for the rampaging “senioritis”, some serious damage could be done.’

‘Brad’s right,’ Belle chimed in. ‘I definitely won’t be held responsible for my actions if I don’t have a party to go to tonight. And nobody’s parents should go on a special anniversary Caribbean cruise without expecting the offspring to take a little advantage.’

‘Besides, this could be our last chance to party
chez Moreau
before we all go off to different colleges and don’t see each other again until our ten-year reunion, where we won’t be able to think of anything to say to each other,’ Brad added.

‘Except to talk about how fat and bald the men have gotten and how all the women still look so fabulous,’ Belle agreed.

Sienna shot a glance at Jason. ‘We
might
,’ she answered.

‘Brad, get over here!’ Van Dyke yelled. ‘We’re combining football with volleyball and a little Frisbee, and we need a rule consult.’

‘I want in,’ Belle said, leaping to her feet. ‘Flying folleyball is definitely my game.’

‘Get yourselves over to my place tonight. No excuses,’ Brad said, with a grin over his shoulder to Sienna and Jason, as he and Belle headed off.

‘Do you have something else planned for tonight?’ Jason asked.

‘Well . . .’ Sienna gave him one of her slow smiles, the kind that always made his stomach flip-flop in a good kind of way. ‘Didn’t you say your parents had plans tonight?’

‘Yeah. They’re off to some business dinner,’ Jason replied.

‘And there’s
no
possibility Dani is going to miss a party at Brad’s . . .’ Sienna continued.

That was true. Jason’s younger sister would not let a juicy party pass her by. It just wasn’t possible. He felt a slow smile slide across his own face. ‘So, we could be al—’

Jason didn’t have time to finish. Adam slid to a stop in front of them, spraying sand in his wake. ‘Should I ask her to the party?’ he burst out. ‘I think she might actually
like
me. But is it too soon? Because the party is tonight. And we’re already doing something today. This, I mean. We’re here together. So that would be two events in a row. And isn’t that uncool? Am I not supposed to be sort of aloof? Vince Vaughn would definitely tell me not to ask. I don’t want to be like the guy in
Swingers
who filled up the answering machine – not that I was going to ask on an answering machine. I was going to ask in person. I’m not a raging doofus, but . . .’

Sienna and Jason looked at each other. Sienna unscrambled the Adam-speak first.