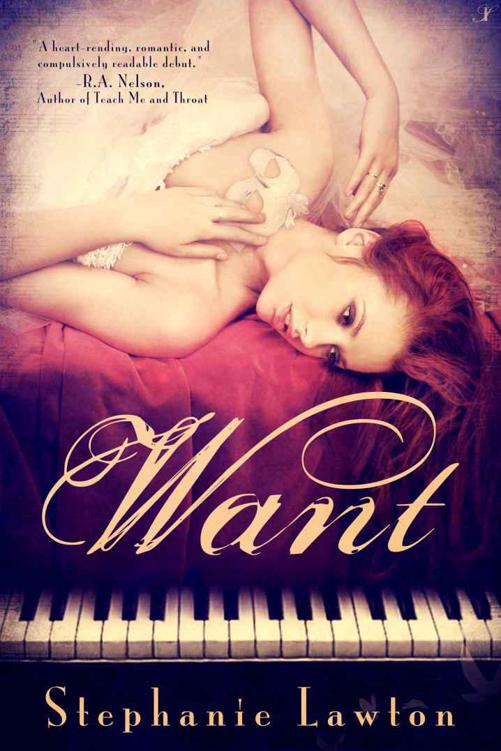 The characters and events in this book are fictitious.  Any similarity to real persons, living or dead, places, or events is coincidental and not intended by the author.

If you purchase this book without a cover you should be aware that this book may have been stolen property and reported as “unsold and destroyed” to the publisher.  In such case the author has not received any payment for this “stripped book.”

This book, or parts thereof, may not be reproduced in any form without permission.  The copying, scanning, uploading, and distribution of this book via the
internet
or via any other means without the permission of the publisher is illegal and punishable by law.  Please purchase only authorized electronic or print editions, and do not participate in or encourage piracy of copyrighted materials.  Your support of the author’s rights is appreciated.

In memory of L.K. Madigan,

whose
kind words meant more than she’ll ever know
.

If you want vampires and werewolves, faeries, fallen angels or zombies, you won’t find them here. I know a real-life monster. She drains the life out of me and tears at my flesh with words and fingernails that sink deeper than fangs ever could. I’m not her only victim, just her favorite.

Even the thick walls of our ancient house couldn’t absorb the crash of a delicate heirloom when she’d aim at Daddy’s head for his latest transgression. My six-year-old self used to peek around the corner and along the steps to where the monster did battle with Daddy. The night I saw her hit him was the night I knew it’d soon be my turn. I was right, and it’s gotten worse over the last eleven years, especially since my brother R.J. went off to college.

Tonight I’m studying for finals. Our air conditioner wheezes in the evening heat, and sweat drops stain my history book. There’s a knock on my bedroom door, but Daddy doesn’t wait for an answer before opening it. I’m glad he’s finally home from work, but it’s weird that he’s in my space with a constipated look.

“He had a stroke. Half his body’s paralyzed, but the doctors think it might only be temporary. Try not to get worked up.”

“He’s already asking for you. His sister said you should try to visit after school tomorrow.”

I swallow back tears and nod.

I think about Mr. Cline all through school the next day.
If I lose him, that’s one less person who knows the real me.
If I lose him, my chances of getting into the music school I want melt like gum in the sun. I bolt for my car as soon as the last bell rings and drive like a maniac to get to the hospital before visiting hours end.

The elevator smells like onions and bleach. His cramped room isn’t much better.

“Mr. Cline, if you didn’t want to give me lessons anymore, all you had to do was say so. Hey, look at that. You’re still able to roll your eyes. They’ll be letting you out of here in no time!”

He rewards me with a lopsided smile. “Would you be a dear…get me glass of water, please?”

I stand to get the Styrofoam cup and water pitcher. I wish I could do more for him, but this insignificant gesture will have to suffice.

Half his face droops, but he’s still the picture of the Southern gentleman. Wires and tubes dangle from a metal pole, and his face is whiter than the over-bleached institutional sheets. Still, he’s sitting up and attempts to talk like nothing’s wrong.

“Juli…dear,” he starts. “I am man enough to admit I do not know what to do with you anymore. I am
your
student. Pretty sure the nurses won’t let us drag a piano into this tiny room, so…”

Here it comes, the part I’ve been dreading,
the
part where he tells me I’m on my own. Instead, he tells me about his nephew, the piano prodigy—and prodigal—who swooped back into Mobile last month.

“Promise you, Isaac is a wonderful young man. Quiet, and he’s going through a rough patch…but he is an effective teacher and brilliant musician.”

“If he’s anything like you, then of course he’s brilliant.”
Though he’ll never fill your shoes.

“Just be kind and don’t tease him right away. He’s your best bet for getting into the New England Conservatory.”

I put my hands on my hips. “Now what makes you think I’m going to tease him? I save all my best lines for you.”

“Isaac graduated from the Conservatory last year.
Master’s degree in piano performance.
That is your heart’s desire, so…is perfect. Will take time to prepare for your recording and audition.”

At the mention of those events, I can only nod, because if I open my mouth, my anxiety and sadness will drip out and spill all over the floor. I want to shout,
Now is when I need you the most! Don’t you dare abandon me!
But it wasn’t fair to him and it won’t change a thing.

I move to leave and kiss his forehead. He’s always been a tiny man, but when my lips touch his fragile skin, I’m afraid he’ll shrink up and disappear into the bed forever.

Finals week is over. Now I face the task of surviving the summer at home with Mama. Thank goodness R.J.’s home for the summer.
He just finished his first year of college, where he basically warms the bench. He also claims to be working toward a law degree, but that remains to be seen. I’m just glad to have him home.
I like the odds of two against one.

“Redheads fade fast,” Mama says. It’s the third time this week. At first, I retorted with a crack about her gray roots. She grabbed a fistful of my curls and dragged me into the bathroom to face the mirror.

I automatically touch the tender spot.

“Have you thought about what I said? You could put a rinse on it to tone it down.”

“But I get lots of compliments on it.”

The three of us—Daddy’s at work again—sit at the dinner table where we pretend to be a family.

“Don’t you kid
yourself.
They’re just being nice to your face. I honestly do not know where you came from, Julianne Casquette. Your daddy must have had some Amazons in his family tree.”

“Slaves, more like it.” R.J. snickers under his breath. I throw a Brussels sprout at him. It thunks off his forehead.

Mama slams down her glass. “Could you just try to act like a young lady? Is that too much to ask?”

“Aw, Mama we’re just playing. Juli knows how to act like a lady. She can’t help it if I make her all squirrelly.”

R.J. winks at me, but I know Mama’s added this to my list of transgressions.

I excuse myself from the table and load my dishes into the washer. I glance out the window and the other side of the glass, across the yard, is where I want to be. My piano studio calls to me like nothing else on God’s green earth. Tomorrow, I’ll open its door to a complete stranger who now has my entire future in his hands.

“Juli! There’s some dude banging on the studio door. You know anything about that?”

I skip down the stairs to peek through the kitchen curtains and into the backyard. My studio
lies
just a few steps away. It used to be a carriage house, but Granddaddy converted it to a four-car garage in the 1950s. Half is still a garage. The other half is my haven.

R.J. and I stand cheek-to-cheek with our noses pressed against the window like little kids.

“Look at the guns on that guy. Jesus, did Mama hire a personal trainer or something?” Backing up from the window, I pull my frizzy hair from my face and bend down to pat Belle on the head. She nuzzles my hand and nips at Beaux when he tries to get my attention.

“No, that must be Mr. Cline’s nephew, Isaac Laroche. He’s helping me with my audition stuff. He’s not supposed to be here for another fifteen minutes, but I guess he’s on Yankee time.”

Outside, the infernal heat of the morning presses in as I shove open the back door and get my first good look at Mr. Laroche. He’s not at all what I expected. He’s not boyish, like R.J. The person in front of me is definitely a man, with plain chestnut-brown hair, eyes the color of Mama’s blue hydrangeas, and a build like a farm boy—tall and thick.

After I check him out, I waltz across the yard to the studio with my head up, fake smile in place, right hand extended. If Mama’s taught me
anything
,
it’s that appearance is
everything
.
I assumed he’d be a younger version of Mr. Cline, so I’m surprised when he bends over to take my outstretched hand. At five-foot eight, I’m pretty tall for a girl, but I have to crane my neck to meet his eyes. Something about the flatness I see in them makes me feel small.

“Pleasure to finally meet you, Julianne.” I shiver at his perfect French pronunciation. Not m
any people give my name a soft
J
. “My uncle’s told me a lot about you. Most of it good.”

“Isaac. Call me Isaac.” He interrupts a second time. “My other students do.”

His mouth stretches at the corners like he’s trying to smile, but it looks painful, like he’d rather be any other place in the world. It makes no sense to take it personally, but I do. I’m eager to win him over, so I flash my best smile and open my eyes nice and big, just the way I’ve seen Mama do at the mailman, the UPS driver, the boy at the grocery store…

“The beginning. Uncle Robert told me you’re advanced, but I want to hear you play first. Get a feel for your strengths and weaknesses.”

I cast a glance over my shoulder. R.J. presses his mouth to the window and puffs out his cheeks. I snicker then usher Mr. Laroche—Isaac—into the studio and give him the grand tour of my sacred space. He approves of the thick carpet and acoustic fabric on the walls. A half-hour later, I’ve plunked out the first movement of the
Wanderer Fantasie
by Schubert. I know the piece in my sleep so I’m sure he’s impressed. Instead, his eyebrows are all screwed up.

“Did I do something wrong?”

“No, nothing. You’re quite good. You already know that, I’m sure.” He taps a pencil against his lower lip and leans back in the loveseat. “But we have some things to work on.”

We discuss the pieces I have in mind for my audition—if I land one.

“The Conservatory makes you jump through some hoops. For the degree you want, you’ll submit a prescreening recording. If they like what they hear, you’ll get an audition and interview in Boston in February.” I know most of this already, but I hope talking will bring him out of his deep freeze.

Before he can elaborate, the back door slams, then the door to the garage. Only a thin wall separates the studio from the garage, so there’s no way we can continue our conversation.

“That goddamn woman will be the death of me. She wouldn’t know a good thing if it bit her bony ass.”

Isaac’s eyebrows shoot up at Mama’s colorful language, but before I die from embarrassment, her SUV roars to life. She peels out of the driveway, sending rocks pinging against the low windows. I summon all my acting skills to smile like everything’s fine. Isaac huffs and picks up where he left off.