Read What's Really Hood!: A Collection of Tales From the Streets Online

What's Really Hood!: A Collection of Tales From the Streets 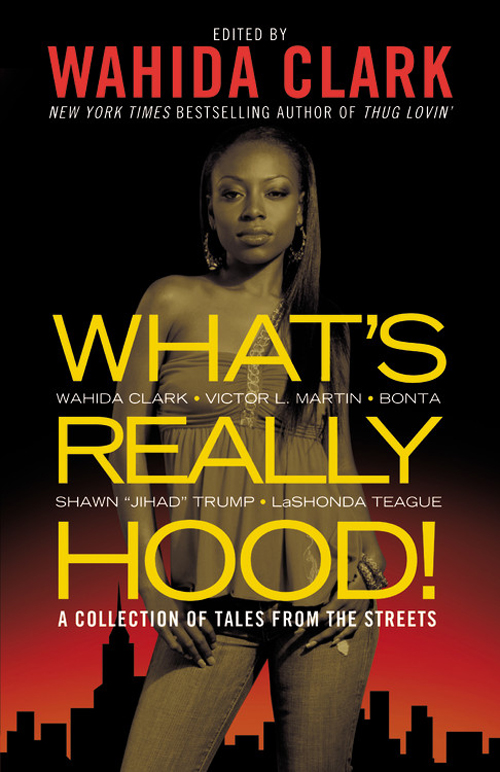 Payback with Ya Life

This book is a work of fiction. Names, characters, places, and incidents are the product of the authors’ imagination or are
used fictitiously. Any resemblance to actual events, locales, or persons, living or dead, is coincidental.

A Preview of
THE GOLDEN HUSTLA

D
esiree Eason was young, black and sexy and far from being a follower of the norm. You know the stereotype of a black woman:
sexually wild, two or more kids by different men, a boyfriend that’s locked up, willing to open her legs for a man based on
his flashy whip. Nah, Desiree was above and beyond that. Her looks were conservative but easily sexy. She was a petite size
five, standing flat-footed at five-two with clear mocha skin. Her brownish hair, which she usually kept in a simple ponytail,
hung past her delicate shoulders. Her light hazel eyes were inviting and between them sat her cute pert nose. Her lips were
thin and sexy and stayed coated with the lightest touch of lip gloss. Her measurements were 34B-23-34. Desiree was a certified
legal assistant for Shaw, Barnes and Rivers Attorneys at Law. Not bad for a twenty-three-year-old single-by-choice black female.
At the moment she was headed back to her office with her laptop in one hand
and her Donald J Pliner bag slung across her left shoulder while chatting on her Audiovox picture flip phone. Just as she
reached for the doorknob while shouldering her cell phone to her ear, a rude comment easily gained her attention.

Desiree promptly told her roommate to hold on for a second. “Excuse me!” she said as she turned around, eyeing the four black
men lounging in the waiting area of the cozy law office. The comment was rude, but in truth… the truth was told. Desiree was
filling out her clingy tweed Calvin Klein pants mighty nicely. In truth, she had a lovely ass!

She eyed each one of the waiting clients and dared one to speak up. Sucking her teeth, she turned on the heels of her Via
Spigas, then went into her office. She wasn’t upset over the comment, she was just tired of seeing black men in trouble. She
hated the senseless gang violence, black men killing each other over a red or blue cloth, and she saw no end to it. Entering
her office, she kicked the door shut behind her, flicked the lights on, then headed toward her desk. Kicking her heels off
after placing her laptop on her desk, she resumed her conversation.

“Where were we?” Desiree said as she placed her stocking-clad feet up on her desk. She wiggled her pedicured toes while relaxing
back into the leather contoured chair.

“What was that all about?” her roommate, Jelena, asked.

“Some dude making a remark about my butt!”

“So,” Jelena teased, “what do you expect? You prancing around with that tight booty.”

“Shut it up,” Desiree said, crossing her ankles. “Anyway, like I was saying… I’m tired of seeing my people going through this
system.”

“I take it that the case didn’t go well today.”

“No, it didn’t. They gave Jamal a life sentence.” Desiree’s voice was filled with pain.

“He did commit a crime,” Jelena pointed out. “He’s the one that did the drive-by in Durham, right?”

“And then shot the police station up in Raleigh?”

“I’m not saying he should,” Desiree responded. “It’s… I just wish there was another way to curb this big problem.”

“It’s called common sense. Ain’t nobody forcing us black people to kill each other. Just because I’m a college grad doesn’t
mean I don’t see the problem. And plus we both know that the system is—” A knock at Desiree’s door forced her to cut Jelena
off.

“Go ahead and take care of your business because my minutes on this phone is already over my budget limit so I’ll holla at
ya.”

“Okay, bye, girl,” Desiree said, removing her feet from her desk as she rolled back from it. Pushing the
END
button, then flipping her Audiovox closed, she laid it on the desk, then went to answer the door.

“May I help you?” she asked in her professional voice as she looked up to the man standing before her looking like Michael
Vick, sporting a nappy mini afro and chewing on a toothpick. He wore a cream-colored G-Unit leather jacket with matching jeans
and a pair of white Air Force 1s. He looked into her hazel eyes, smiled, then looked down at her sexy feet. Desiree rolled
her eyes as she realized she had forgotten to slip on her heels.

“Mr. Shaw told me to give you my info and stuff,” he said, grinning around the toothpick.

“Come in,” she said, nodding at the chair in front of her desk.

As she walked around her desk she heard him mumble something under his breath.

“Excuse me?” she asked, sliding her feet back into her Via Spigas.

He continued to grin as he took a seat. “Anybody ever tell you that you favor Christina Milian?”

She ignored his comment as well as his smile. “I think we have more important matters to tend to other than my looks, Mr.…?”

“Polo… I mean Tyrone,” he said, removing the frayed toothpick from his mouth.

“What’s your full name?” she asked, with her slender fingers poised over the wireless keyboard to her computer.

“Need a trash can for that?” she asked without looking at him. She was referring to his toothpick as she typed his name in.

“Nah, I’m good,” he replied, checking out her ring finger to see if shorty was married. Nope.
Damn, she’s fine as fuck.

Desiree was strictly professional as she took all his info. He was hiring Mr. Shaw in the hopes that he could keep him out
of prison for a gun charge.

“Do you have any pending charges?” she asked, removing her eyes from the flat computer screen.

Once she had typed in the info she asked him about his current charge.

“I take it that you don’t have a permit?”

“Hell naw, shawty…” He started to laugh but paused at the stern look on her still-sexy face. “I mean… um…”

“My bad,” he said, holding his hands up. Her take-no-shit mind-set was off the hook.
I wonder if she’s the same in the bedroom? I can only dream because she might not fuck wit such a thug nigga as myself.

“And your reason for having a gun?”

“I live in Durham,” he answered matter-of-factly. “Shit, it’s like a fuckin’ war zone…” he continued.

“Is that what you expect the judge to hear?”

“So,” she said, crossing her arms. “If the judge gives you some time, and say that’s how it is… then what?”

Polo looked briefly into her eyes, then off over her shoulder at the wall behind her. Glancing at one of the photos on the
wall, he gained the knowledge that she had finished college at Bowie State University.

Clearing her throat to regain his attention, she repeated her question. Polo shrugged his shoulders, then tried to look into
her eyes. He could only hold his gaze for a few seconds before he again broke the eye contact.
Damn, shawty placing me outta my damn element. She must not know who I is. Dat nigga Polo dat fuck slow and stack dough.
He started grinning at his silly thoughts.

“Is something funny, Mr. Bell?”

Polo gathered himself as he erased his grin. “Nah… I was just thinking about something, that’s all.”
I’d eat dat ass fo’ breakfast… word up!
he continued in his thoughts.

“How old would you happen to be, Mr. Bell?” she asked, uncrossing her arms to type in the info.

“I’ll be twenty-one next week,” he replied.

The rest of their conversation went on as it had started. Strictly professionally. When it came to the point of the payment,
Polo pulled out his fist-size roll of colored bills. Fifteen hundred dollars were counted out, then placed on her immaculate
desk.

“Do you think the case could be put off a few months?” he asked.

“You can talk to Mr. Shaw about that next week. But by looking at his caseload… the answer will nine times out of ten be yes.”

“Good,” he said, placing his frayed toothpick back into his mouth. Feeling cocky, he asked her if she had a man. That was
a wrong move.

“Be sure to call Mr. Shaw next week,” she said, ignoring his question about her personal life. She showed him the door with
a forced fake smile. Polo kept his smooth composure as he came to his feet. As she turned to open the door for him, he stole
another glance at her heart-shaped ass.

Whoever hitting dat is a lucky-ass nigga!
he thought to himself as he exited her office.

Once Polo made it outside in the chilly November weather he zipped up his G-Unit leather jacket, then pimped down the crowded
sidewalk. He started grinning as he neared his glossy candy-colored Duke-blue Dodge Charger perched on a set of twenty-two-inch
deep-dish DUB Shoreline rims. Sitting on the hood was his buck-wild cousin Tink, smoking a Newport.

“Get the fuck off my hood!” Polo said, pulling out his keys.

“Fuck you!” Tink replied, sliding from the glossy hood. Polo paused to check for any dents as Tink thumped his burning Newport
toward the gutter. None were found.

“Whut dey say?” Tink said, sliding his long twisted dreads from his face. “You goin’ back to prison or not?” He laughed.

Polo waved Tink off as he keyed the remote to raise the Lambo doors in the air. Once inside, Tink held up his numb hands near
the vent, waiting for the heat to blast. Conversation inside the Dodge Charger was pointless. Reason being, the eight square
KICKER subwoofers shook Polo’s whip with Three 6 Mafia’s “Stay Fly.” As Polo checked over his shoulder before pulling out,
Tink reached into his waistband and pulled out a black .380 that he laid in his lap. With nothing on his mind he rapped along
with the music.

Lies Inside by Lindsey Gray
Astray by Emma Donoghue
Chump Change by David Eddie
The Wave by WALTER MOSLEY
Stone Fox by John Reynolds Gardiner
Lark by Tracey Porter
This is the Life by Joseph O'Neill
Beholden by Pat Warren
The Antique Love by Fairfax, Helena
Hell in the Pacific: A Marine Rifleman's Journey From Guadalcanal to Peleliu by Jim McEnery, Bill Sloan