Read Whose Life is it Anyway? Online

Whose Life is it Anyway? 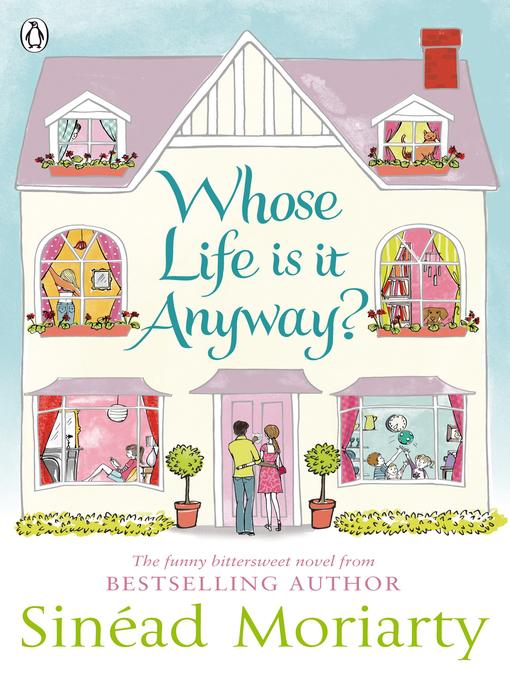 Whose Life Is It Anyway?

Bestselling author Sinéad Moriarty lives in Dublin with her husband and their two sons.
Whose Life Is It Anyway?
is her fifth novel.

Whose Life Is It Anyway?

All rights reserved
Without limiting the rights under copyright reserved above, no part of this publication may be reproduced, stored in or introduced into a retrieval system, or transmitted, in any form or by any means (electronic, mechanical, photocopying, recording or otherwise), without the prior written permission of both the copyright owner and the above publisher of this book

‘Niamh, you’re going to get whiplash,’ said Pierre, reaching over to hold my hand as I turned back from the door.

‘I don’t want to miss him when he comes in,’ I said, tensely.

‘Well, then, maybe you should stand beside it,’ said Pierre, sighing. I’d been snapping at him all morning and he’d clearly had enough.

I was about to apologize when I saw Finn pushing open the door of the brasserie. I leapt up and ran over.

‘Hey there. So, come on, where’s this boyfriend you’ve been so coy about?’ he said, looking around the bar. ‘No, don’t tell me, let me guess.’ He scanned the faces in the room and a smile spread over his face. ‘Oh, yes, very you – blue shirt, sandy hair, big smile,’ he said, pointing to a jolly-looking, round-faced guy in the corner.

I shook my head. I was afraid to speak. I felt sick with nerves.

‘Over there,’ I said, pointing at Pierre.

Finn squinted. ‘In the red jumper?’ he said, sounding surprised, as he stared at a middle-aged man with glasses in a scarlet sweater.

I heard laughing behind me. Then a voice said, ‘This is priceless, Tom. Listen. “The difference between men and women: I was out for lunch with two male colleagues yesterday. The conversation went as follows. Male
1
: ‘I can’t believe you ordered the burger. You’re a fat fuck.’ Male
2
: ‘Yeah, well, I’d rather be fat than an ugly fucker who hasn’t had sex in a year.’ Male
1
: ‘I had sex last week.’ Male
2
: ‘Dogs don’t count.’ Male
1
: ‘She wasn’t that bad.’ Male
2
: ‘She looked like Danny De Vito.’ Male
1
: ‘Only smaller.’

“‘They both roared and began to talk about the Manchester United v. Chelsea game.

“‘I was gobsmacked. If one of my female colleagues called me a fat bitch for ordering a burger, not only would I never speak to her again but I’d stop eating, become anorexic and die of food deprivation.

“‘If she told me I was ugly, I’d enter the witness-protection programme where I’d undergo an extreme makeover: eyebrow lift, cheek implants, Botox, lip-plumping and veneers (yes, I have thought about it before). A year – and a lot of pain – later I’d come back and confront her as a stunning supermodel type with pearly white teeth.”’

‘Niamh, that’s your column he’s reading,’ said Emily, a fellow journalist I was having coffee with. ‘Go over to him.’

‘No way,’ I said, shrinking back in my chair.

Emily peered over the top of the couch and gasped. ‘He’s gorgeous – you have to go over.’

I shook my head. I was far too embarrassed to stroll over to some complete stranger and say, ‘Hi, I’m the journalist who wrote that.’ But before I could stop her, Emily stood up.

‘Sorry to interrupt. I couldn’t help overhearing you laughing at that column and I wondered if you’d like to meet the woman who wrote it. She’s right here beside me.’

‘I’d love to,’ said the voice. He had an English accent.

I blushed and thumped Emily’s leg. ‘Stop it,’ I hissed.

‘Come and join us,’ said my ex-friend.

I heard movement, then two men came over and sat down. I stared into my cup, mortified.

‘Very pleased to meet you,’ said my fan, proffering a hand. I looked up – and froze. In front of me was one of the handsomest men I’d ever seen.

‘I’m Pierre and this is Tom,’ he said, introducing his not-so-attractive older friend.

‘I moved to England when I was ten, so my accent is long gone.’ He smiled. Then, turning to me, he asked, ‘So, what’s in store for next week’s column?’

‘Maybe you guys can give her some ideas,’ said Emily. ‘Let’s order some coffee and brainstorm.’

‘I’d love to,’ said Tom, ‘but I have to go. I’ve a lecture in ten minutes. I’m sure Pierre will give you plenty of material. Nice to meet you,’ he said, and hurried out of the door.

‘Are you a journalist too?’ Pierre asked Emily.

She sighed. ‘Kind of. I write the obituaries. I’m still waiting for my big break.’

‘What about you?’ Emily asked him.

‘Nothing as glamorous as Fleet Street, I’m afraid. I’m a boring old professor.’

‘That’s not boring at all, it sounds fascinating,’ Emily gushed.

‘One of my students fell asleep in a lecture today.’

‘She must be short-sighted,’ laughed Emily.

‘Is your friend OK?’ Pierre asked her, pointing to me. I was staring at the floor, trying to stop my legs shaking. I’d never felt such an instant attraction to someone. I was afraid to look up in case it was written all over my face.

‘Normally you can’t shut her up. I think she’s annoyed with me because I dragged you over,’ Emily admitted.

‘I’m not annoyed,’ I said, finding my voice, ‘but I am incredibly embarrassed. I don’t normally go around accosting people who read my column.’

‘Thanks, it’s really nice of you to say so,’ I said, smiling at him.

‘Where do you get the ideas from?’

‘To be honest, I spend a lot of time in coffee shops like this one, listening to other people’s conversations.’

‘Were you listening to mine?’

‘Tom and I were talking about phonetics. I don’t think even you could make that funny.’

‘It’s not actually the subject matter that counts, it’s the way it’s being discussed that can be humorous,’ I said, batting my eyelids, just a little.

‘Even a conversation about auditory phonetics and speech perception?’ he asked, leaning closer.

‘You might have me there,’ I said, giving him a flirty raised eyebrow.

‘Will you look at the time!’ said Emily. ‘I have to run. I’ll talk to you later, Niamh. Nice to meet you, Pierre.’ She winked at me as she left.

‘I hope you’re not going to stalk me.’

‘Do you have many stalkers?’

‘So I’ve a lot of competition?’

‘How do I get to the front of the queue?’

‘Can I start with flattery?’

‘What happened to
belle
?’

‘When was the last time you went out with a woman who looked like a horse but made you laugh?’

‘You need to work on your technique.’

‘In a meaningful relationship?’

‘There is none. Are you always this suspicious?’

‘So why are you giving me the third degree?’

‘Because you’re a thirty-something professor who’s very easy on the eye. How come you’re single?’

‘How do you know I’m not in an incredible relationship?’

‘You wrote about being single last week.’

‘This. The fact that I happened to be reading your column while you were sitting at the next table and you heard me laugh and we met.’

‘It could just be a coincidence.’

‘Still room for improvement, though.’

‘You could say, “
Tu es
the twin of Claudia Schiffer.”’

‘Can I ask you a personal question?’

‘I think you’ll find it acceptable.’

‘As a phonetician I’m fascinated by accents and yours is fantastic. You speak English with an English-Irish accent peppered with Irish sayings.’

‘That’s because I’m a mongrel.’

‘That makes two of us. What’s your excuse?’

‘Born and bred in Finchley, North London, of Irish parents. I spent my youth constantly surrounded by Irish relatives and family friends. I came to Dublin to study and never went back. You?’

‘Born and raised in Paris until I was ten when we moved to Oxford. Parents are from Martinique. That’s where the tan comes from.’

‘I was wondering about that.’

‘But too polite to ask.’

‘Didn’t want to be politically incorrect.’

‘Do I call you African-French?’

‘Martinique’s in the Caribbean.’

I don’t remember going home. I was floating. No one had ever had such a strong impact on me. As I caught my reflection in a shop window I smiled. Thankfully I had to interview a cute up-and-coming actor that morning so I’d got dressed up and put on makeup. If Pierre had met me on a normal day – tracksuit bottoms and T-shirt – he’d have run a mile. Maybe it
was
serendipity. I’d never been to that coffee shop before. And what were the chances of him sitting beside me reading my column? It was all a bit freaky.

Lusting (Carnal Sins Of Noah Trilogy #1) by S. K. Ervin
Abide with Me by E. Lynn Harris
Always Running by Luis J. Rodriguez
The Word Exchange by Alena Graedon
Lance: A Hitman Romance (Santa Espera #2) by Harley Fox
The Fire Prince (The Cursed Kingdoms Trilogy Book 2) by Emily Gee
The Geneva Project - Truth by Christina Benjamin
The Hummingbird by Kati Hiekkapelto
Our One Common Country by James B. Conroy
The Sapphire Heist (A Jewel Novel Book 2) by Lauren Blakely