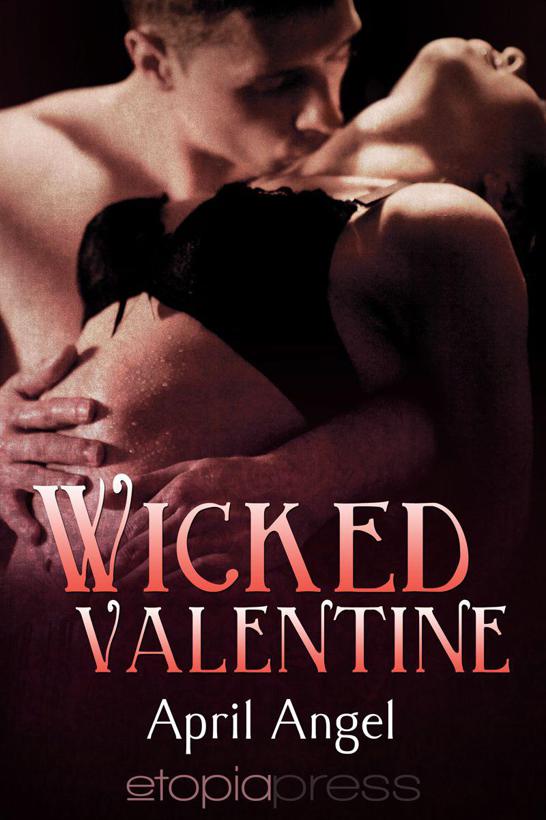 ~ Look for these titles from April Angel ~

“
Mr. Buff
was hot. Not only the character himself, with his suave confidence and hypnotizing dominance, but the story was all-round HOT. In a short amount of pages April Angel wove a deliciously naughty story…”

“This was my first read by this author, but there's no way I'm going to miss out on anything else she writes. …Ms Angel sure knows how to write sex scenes. They're raw, carnal, explosive, very descriptive and the words tickle your nerves from head to toe.”

~ Look for these titles from April Angel ~

For my girls: Jewel Fernandez, Yoli Ventura, Diamond Bermudez, Leda Verber, Carrie Fort, and Lindsay Avalon. Thank you for your support. You are the best fans anyone could ask for and I appreciate every single one of your wonderful words. Your continued encouragement for me to write some more is priceless. Heidi Hutchinson, you’re my writing rock. I have no words to thank you for taking the time to listen, encourage and help. For my awesome editor, Melinda, you’re amazing. Thanks DeAnna for helping make this wicked story sound as awesome as possible. And for everyone who has picked up one of my books, thank you.

What in the hell was wrong with this picture? She was at a retreat, or what she liked to think of as a stupid idea someone with too much time had come up with to push her and her coworkers into learning to communicate better, get a feel for what each employee wanted to get out of the job, and figure out a way to provide better service…and some other crap she couldn’t remember at the moment.

Why in the world did she have to be there? She slapped her calf, killing off another mosquito. Darkness enveloped the group around the campfire, which made it easy for her glance over to the side and chug on the wine bottle, the one she had strategically placed next to the tree trunk she sat on. Everyone was so involved in “sharing” that they didn’t notice her getting drunk in the back, alone. And that was perfectly fine by her.

If only they would stop the incessant chatter already and send her off to bed, giving her some peace. But if she went to bed in her very lonely cabin, she wouldn’t be able to watch Max.

She glanced off to the side, as if admiring the scenery, and took another gulp of wine, the fruity flavor no longer bursting on her tongue but mixing with the lingering sweetness from her previous swig.

“Sabrina?” Eve’s sharp tone made her jerk to face the rest of the group. Normally she wouldn’t mind being called by her real name, though everyone outside of work knew her as Nina, but the way Eve said it, with so much severity, it made her want to wince.

The outdoors and nature did nothing to smooth out Eve’s harsh features. Nor did she look anywhere near friendly with the glare she directed toward Nina. Nina had to fight the urge to giggle every time Eve looked at her that way. Eve reminded her of Cruella de Vil.

“I asked if there was anything you’d like to add to the discussion?”

Nina’s gaze slid past Eve to lock on Max. His lips quirked, almost like he knew exactly what she’d been doing. Too bad he was so far away and there were all those people there, or she’d finally do something about the attraction that didn’t let her sleep. She was ready to finally give in to temptation and have her way with him. Screw the fact that they worked together. Or better said, she worked for him.

“No, Eve. I think what you have shared covers all the important points we’re here to discuss.” Lie. She had no clue what Eve had been saying.

Eve’s frown smoothed, and she lifted her chin. “Thank you, Sabrina.” She turned back to the others, effectively dismissing her. “As I was saying…”

Nina shut Eve’s low, droning voice out of her mind again and peeked down a passageway between the trees. There was enough light from the campsite, she could just make out her way down the path. Curiosity got a hold of her. She stood on wobbly legs and blinked. The group spun out of focus for a second.

Nina took a few steps toward the dimly lit passage in the woods before she turned to Max’s enquiring voice. “I’m just going to the ladies room for a moment.” She pointed in the direction of the trees.

She ignored Max’s call to her and strolled off, breaking twigs and dead leaves with each step. Mosquitoes nibbled on her legs, each bite a constant reminder that she wished she was home in her bed, relaxing, or at least with someone that would help her fight the arousal shooting through her whenever she glanced at Max. But she’d broken up with her last boyfriend a while back. Since he didn’t get the message that she was no longer interested, she had stopped going to the places she might encounter him.

With each step she took, the sound of the river beckoned her in its direction. Her foot caught, and she tripped on a branch. She squealed as the earth tilted in front of her. Rocky ground rushed up to meet her face.

A strong pair of hands grabbed her by the waist and hauled her backward. “I got you.” Max’s deep voice caressed her ear while he helped her straighten.

Swooshing from water streaming nearby and crickets, somewhere in the vicinity, were the only sounds to be heard. Each noise drove home the fact she was outdoors and anyone could come by, not that she cared.

He shifted her in his arms until she faced him, her front leaning heavily into his muscled body. She sighed, glancing up into his shadowed face. Not that she needed light to know what his delectable square jaw looked like. Or how brilliant his blue eyes were. He leaned back into a thick tree trunk, pulling her with him.

Slow caresses trailed down her back, making her shiver and her blood thicken in her veins. With each intimate touch, her body throbbed. It was time to stop torturing herself. She couldn’t fight her body any longer.

“I think you’ve had a few too many, beautiful. Let’s get you back to your cabin.”

“No.” She lifted on the tips of her trainers, curled her hands around his neck, and pulled his head down to her. “Now stop torturing me, and kiss me, damn it.”

He groaned softly. “Sabrina, you’ve definitely had too much to drink. Sneaking in wine was not part of the agenda, you know.” He stroked down her spine to the curve of her ass and palmed her cheeks.

She huddled closer, cradling his erection in the juncture of her thighs. “I know it wasn’t, but Eve is boring. And it’s not that I’ve had too much too much to drink. I’ve just had enough, Max. I’m tired of fighting this. I want you.”

“Baby, you hate my guts.” He chuckled, lowered, and dropped a kiss on her nose.

Arousal gathered inside her, heating her blood by more degrees than she cared to admit. “No. I don’t hate you. I just don’t like that I want you so much.” She kissed his jaw, loving the sound of his sharp inhale when she licked his neck.

Breaths mingled, gazes connected, and wet heat dripped from her sex. It was pure torture to have his sexy mouth so close and not get a taste. “Just kiss me, Max. I need you.”

Peaks of tension zigzagged inside her and made her shudder. He held her neck with one hand, tilted her head back, and swooped down for a kiss. Potent need, unlike any she’d ever felt before, possessed her. She whimpered into the sensual kiss. Each swipe of his tongue over hers added kindling to the explosions going off inside her. She raked her nails down his T-shirt, over his hard-muscled chest, and to his jeans. “Fuck me.”

He drew back from their kiss, ending the twining of their tongues. A scowl, deeply etched on his face, showed his disbelief at her words. But this time she wasn’t going with logic. She decided to give in to what her body desired. And it desired Max.

“Sabr—” One soft moan left his lips when she gripped his cock over his jeans.

“Max, this isn’t a game. I want to see you.” She panted, unbuckling his belt. “I want to touch you.” Excitement rushed through her, urging her to unzip his jeans. “I want to taste you…”

“Jesus, baby. Just give me a second.”

“No. No seconds, no thinking, no anything.” Warm, hard flesh met her hand when she dove into the well-worn denim of his jeans. His ragged breaths, coupled with sporadic moans, urged her further. Their gazes connected, and sparks flew. Lust coursed between them. “No more waiting, Max. It’s time to feel.”

Time blurred. Somehow he moved away from the trunk, and they turned. She was the one with her back to the large tree when he locked his lips with hers again. The way he kissed her, full of dark promise, leveled her patience. She whimpered, wanting—no, needing his touch. Her breasts swelled under her top, her nipples pebbled into tight points, and the throbbing between her thighs increased. He tugged on her tank top, jerking it up and off her body.

Steampunk: Poe by Zdenko Basic
The Bride of Larkspear by Sherry Thomas
Home by Stacia Kane
Lookout Cartridge by Joseph McElroy
Demon Camp: A Soldier's Exorcism by Jennifer Percy
City of Devils: A Novel by Diana Bretherick
Surrender the Night by Tyndall, MaryLu
Professor’s Rule 01 - Giving an Inch by Heidi Belleau, Amelia C. Gormley
How to Seduce a Gargoyle in 10 Days by Saranna DeWylde
MacRieve (Immortals After Dark) by Cole, Kresley