Wives with Benefits: Volume One 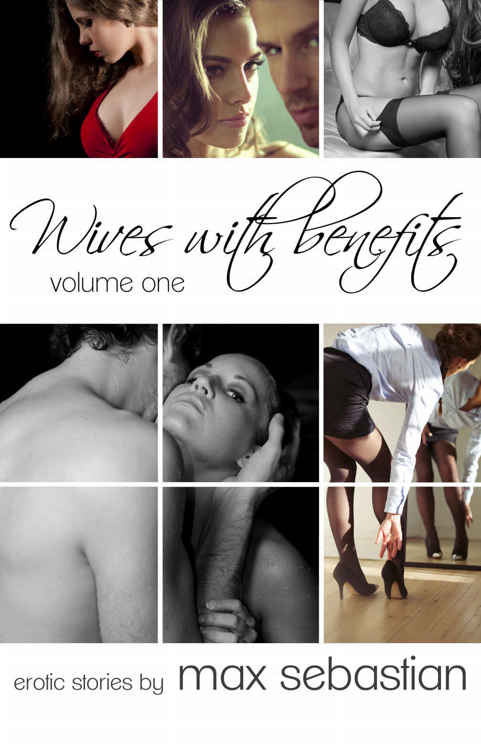 Anarchy of the Heart

What’s Mine is Yours

What’s Yours is Mine

Waiting in Line for a New iPad

A Kiss is Just a Kiss

A Girl in the Library

She was a Good Girl

Wives with Benefits: Volume One

This is a work of fiction, any similarity to actual persons, living or dead, or events, organizations or locations, is purely coincidental. Reproduction in whole or in part of this publication without written consent is strictly prohibited, other than limited quotes for purposes of review.

The author greatly appreciates you taking the time to read this book, please do consider leaving a review wherever you bought this title, to help others find this story.

The Other Guy is Paying

What Your Husband Really Thinks

I’ve never quite understood western culture’s morbid terror of all things sexual allied to its acceptance — and even celebration of violence. I can imagine it is something to do with its lingering male bias, the associated and archaic glorification of war and the need for the ruling classes to find ways (stemming from religion) to control the teaming masses and their need for limited resources that should properly belong to the wealthy and powerful.

But such it is: and erotica has its reputation throughout our society as something inherently Bad, something to look down on, something to shun, while all manner of unspeakable violence and evil can be expressed with scarcely any call for similar controls and censorship.

In my view, however, erotica and explicit literature has so much value — artistically, educationally and as pure entertainment.

In a society embarassed to talk publicly about sex, it has proven invaluable to me over the years in opening my eyes to the beauty and variety of human sexuality — not to mention in helping to develop my own preferences, tastes and fantasies in the realms of all things erotic. The covert nature of this genre has not made it easy to find the stories that most illuminate and satisfy. In fact the often random way I’ve navigated it since my discovery of this kind of writing often makes me wonder that if things had been different in my exploration, perhaps my own writing preferences would be different, now, to what they have become.

For instance, I still suspect that it is pure chance that I happened to come across a story that made me question my inherent belief that a committed sexual partner should only have eyes for the one person they have committed to. Sure, I later discovered stories that further questioned my ingrained assumptions about monogamy, but if I hadn’t noticed my curious response to a story where a man actively allowed his partner to get involved with another man, perhaps I wouldn’t have looked for other stories to provoke that kind of response again.

Ever since discovering erotic writing when I was a heart-broken college student recovering from the injustice of early romantic tragedies, short stories have been a wonderful way for me to explore the range of subgenres and the huge variety of writers penning challenging, explicit explorations of passion and love. I know plenty of my readers prefer the longer form, and just like them I love to be able to bury myself in complex characters and follow their progress through to (I would hope) an eventual happy or at least satisfying ending. But shorts can give you such wonderful little tastes of the genre, it hardly compares. With short stories, you can try out little ideas and flash a light on certain key moments in a character’s life, and then move straight on to another.

There will always be readers who want to read only stories with a certain page count, but I would contend they are missing out.

The explosion of ebooks seems to have given fresh blood to the writing and availability of short stories, though I have my concerns about the developing trend in erotica — certainly on Amazon — for some to see this form as some kind of get rich quick scheme, charging readers over the odds for underwhelming quality in the hope that certain key words in titles or descriptions will drive sales, rather than the value of the writing itself. At the right price, however, it is now easier than ever for readers to dip into a short story they might get through in a single sitting, leaving them with a warm feeling or even a new author to follow. I choose to see this as a generally positive direction for the genre.

As I progressed to the Kindle and took up the ebook instead of the web page, my progression through erotica took the form of short story anthologies, particularly those featuring multiple authors. Finding a good story in one collection might lead to another collection featuring another story by that same author. Or, a collection with particularly noticeable quality might suggest a discerning editor — and so other anthologies from that editor might similarly prove fruitful.

I’d particularly mention any collection edited by Violet Blue as providing a guarantee of quality, as well as offering a view on different kinds of erotic story and subgenre. If I was to try to pin down where I first discovered the strange appeal of partner-sharing stories, it could well have been from one of Violet Blue’s collections targeted at couples. Perhaps Portia da Costa’s story
Silver Screen
, in the
Sweet Confessions
anthology, where a woman follows her lover’s instructions to visit an adult theater, where she openly enjoys a dirty movie in the company of a man who might, or might not be her lover.

Authors or author-editors like Alison Tyler, Charlotte Stein, Kristina Wright, Jeremy Edwards, NT Morley and Rachel Bussel Kramer led to me realizing the interesting nature of power balances within relationships — dominant males, or more enticing to me, dominant females — as well as the challenge to society’s assumptions about monogamy and committed relationships.

In more recent years, the recommendation engine within the Amazon website has become more useful in helping navigate the genre, along with the likes of reader-driven databases like GoodReads.com — and thanks to the lessons learned from the various anthologies I ploughed through during the dawn of the Kindle age, I was able to use these to find stories and authors that explored more fully the particular partner-sharing themes I was now interested in — authors like the wonderful Kirsten McCurran, Kenny Wright and most recently Ben Boswell, all of whom have produced some stunning shorts along with their fantastic longer stories in this sub-genre.

So when all is said and done, I’d like to pay tribute to the short story, and its value as a form within the erotica genre. Some readers, judging by their thoughts expressed in reviews, seem to take the attitude that a short story simply means the writer couldn’t be bothered to turn an idea into a full novel — but that is so often to miss the whole point and the whole benefit of short stories.

While I continue exploring my own thoughts in erotica through longer works, I would always hope to go on writing shorts that capture a brief idea that might pass my way without finding a long project in which to find a home. My own shorts tend to be on the long side for the genre, and two in this volume stretch almost to novella scale —
Playback
and
What Your Husband Really Thinks
, two stories where wives are trying to understand their husbands when it is revealed that they harbor wife-sharing fantasies.

The final story in this volume,
A Wife’s Opportunity
, starts out after the couple has discussed the new approach to their relationship, they both accept that they’d like this to happen — but at the same time, taking that final step to actually make it happen is not necessarily a straightforward thing.

Two stories in this particular collection I would describe as a little more experimental than the others —
The Other Guy is Paying
is a tale that attempts to look at a slightly more established wife-sharing arrangement, although it still highlights that the couple involved are still navigating a journey, with potential uncertainty ahead.
Retribution
, the first story in this collection, attempts to disrupt my usual tendency in these kind of stories to ensure an ironclad consent is given by the husband for the wife’s infidelity. It sets a slightly darker tone, perhaps, but I like to think highlights the possibilities of the short story form in taking an idea and simply seeing how it plays.

So, I hope you enjoy this first volume of my wife-sharing short stories, dear reader, and that even if you consider the short story inferior to the longer form, that you find some reward in these pages for picking up this book.

Oh, it probably wasn’t the best motivation for sex, but it was what she needed at the time.

The perfect response to that stupid blank expression on Mark’s face when she’d presented him with the little pair of thong panties she’d fished out of his suit jacket following his return from the conference in Vegas.

“I don’t know what it’s doing there,” that expression had said, clear as day.

But he hadn’t denied anything, hadn’t told her that nothing had happened, that it was a practical joke pulled on him by a co-worker, or some other such explanation. And when she’d angrily booked herself into the hotel for the night — because God knew Mark wasn’t going to do anything like take responsibility for his actions and do the honorable thing and move out himself — he did nothing to stop her, nothing to persuade her to stay, talk about it.

Mad About You by Joan Kilby
The Boy I Love by Marion Husband
Slot Machine by Chris Lynch
Master of the Opera, Act 3: Phantom Serenade by Jeffe Kennedy
Before I Break by Alec John Belle
Zombie Battle (Books 1-3): Trinity by Druga, Jacqueline
Heat and Light by Jennifer Haigh
Distracted by Warren, Alexandra
Legends of the Ghost Pirates by M.D. Lee
Taken by the Sheikh by Pearson, Kris