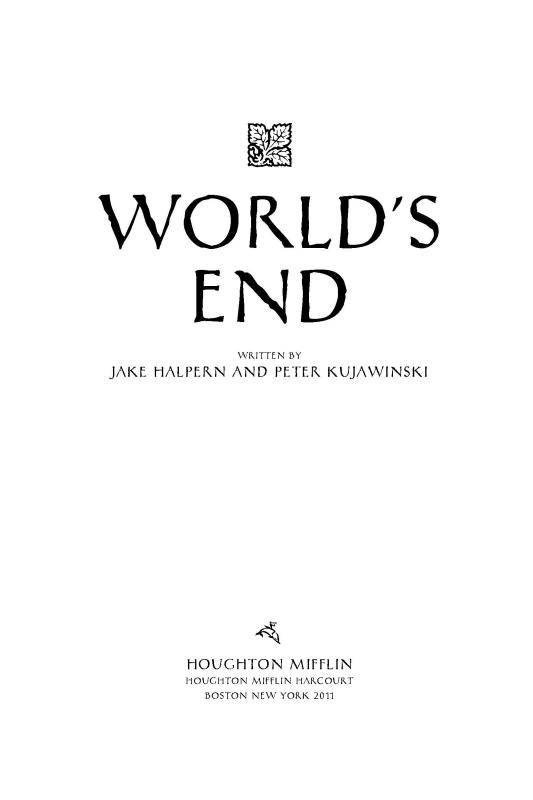 Marta's Song: There's More to Me

These Great Sleepers Passed Through the Alexandria Crypt

The text of this book is set in Aldus Roman.

The illustrations were created digitally.

Summary: After learning that his presumed-dead father may still be alive, Alfonso Perplexon, now fifteen years old, takes on the dangerous task of returning to the land of Dormia to search for him.

To my mother for always,
always believing
âJ.H.

To my wife, Nancy Celia Rose,
I love you till the end
âP.K.

CHAPTER 1
BENEATH THE STREETS OF PARIS

T
HE SOUND OF TEENAGERS
giggling and snickering echoed through the well-swept stone passageway. The ruckus grew louder and louder until, finally, the pleading voice of a French tour guide called through the darkness: "Attention, mesdames, monsieurs. Silence! Please, be respectful, we are among the dead!"

The teenagers, however, paid no attention. They all hailed from the same small town in northern Minnesota and none of them had ever been to Europe. Today was their first full day in Paris and they were simultaneously too exhausted and too keyed up to listen.

The tour guide was leading the way down a long passageway that tunneled deep into the earth, far beneath the Montparnasse neighborhood of Paris. Electric lights shone at regular intervals, bathing the stone walls in a harsh glare. Droplets of cold black water dripped from somewhere overhead. The air smelled dank, musty, and metallic.

The tour guide, a short woman with shoulder-length gray hair, glared at the students.

"If you don't behave," she loudly whispered, "we'll have to leave. These are the catacombs, after all. Have you no respect?"

She was about to continue her lecture when a profound silence came over the entire group. The students had reached the end of the hallway, which opened into a dark vault with an arched, buttressed ceiling and a dirt floor. In the middle of the vault was a stone statue of a woman holding a child. The child appeared either sick or unconscious, or perhaps dead. A sudden uncertainty came over the teenagers. Slowly, they stepped into the darkness of the vault. Several of them gasped as their eyes became accustomed to the gloom. The walls of the vault were piled from floor to ceiling with human skeletons: forearms, tibiae, femurs, clavicles, spines, and skulls.

The French tour guide nodded her head in approval. Now she had their attention. She turned on her flashlight, asked everyone to gather around her, and began talking about the catacombs of Paris. At one point in time during the nineteenth century, the cemeteries of Paris were overflowing, explained the guide. To solve this problem, the city's gravediggers unearthed all the bodies from Paris's three largest cemeteries and placed them here, in a giant hollowed-out mine, below the Place Denfert-Rochereau.

"And now, here we are, in the world of the dead," whispered the tour guide. "We are standing in this mine, a kilometer underneath the busy streets of Paris, surrounded by millions of lives now many centuries gone. Look around, and think of them. Think of what they saw, who they loved, and what they created."

She looked at the teenagers' awed faces and knew the catacombs were having their intended effect. With a small fling of her head, she led the way deeper into the subterranean vaults, stopping only once to point out a stack of conspicuously tiny skulls of long-dead children. Finally, these American students were quiet! The tour guide tied her scarf a little tighter around her neck and quickened her pace.

Of the two dozen students in the group, one of them lagged behind, walking quietly. This was fifteen-year-old Alfonso Perplexon. Three years had passed since his quest to find Dormia, and now he was back overseas, albeit on a rather tame class trip. Alfonso was very much a teenager these days. Recently, he had gone through a growth spurt, and he was now tall for his age. He was thin, almost gaunt, and he wore his hair long so that it often dangled over his dark green eyes.

One thing had not changed about Alfonso: he was still shy. He had always preferred reading a book or cross-country skiing by himself to playing football or going ice fishing with the other boys his age. It wasn't that he didn't like people. He enjoyed good company when he could get it, but he hadn't found much of it in World's End. The things that interested Alfonsoâbooks, maps, puzzles, and all matters related to sleepingâheld no interest for his peers. Alfonso enjoyed some popularity when he did spectacular things in his sleep, like tightrope walking on a set of icy telephone lines, but it had been a long time since he'd done anything like that. In recent years, Alfonso had been sleeping like a normal person, for eight hours a night, in his bed, on his back.

But, suddenly, as he made his way deeper into the catacombs, Alfonso was overcome with an overwhelming urge to fall asleep. Why now? And to what end? He tried to stay awake, but it was no use. Alfonso's eyes rolled back into his head, his eyelids fluttered, and he let out a soft, barely audible snore. And that was that. He was asleep. Well, not quite asleep. He was in a sleeper's tranceâthe sort that only Dormians entered. His awkward movements instantly turned both delicate and precise, like that of a cat stalking prey. Alfonso slowed his pace, letting the group drift well ahead of him, and then he darted down a side passageway that appeared to be a dead end. But it wasn't. The passageway merely narrowed into a crawl space and then continued deeper into the earth. The passageway intersected with others, but Alfonso navigated his way with great speed and certainty. His sleeping-self knew exactly where to go.

After about ten minutes, the crawl space opened into a large room with a small wooden door that looked as if it led to a utility closet. The door was cracked open, revealing a dim light. At that very moment, Alfonso's eyes opened wide, and he woke up. He glanced around uneasily, trying to get his bearings.
Where am I?
His thoughts were interrupted by the sound of a woman's voice. It was a deep, craggy voiceâthe voice of a woman who chain-smoked and had damaged her vocal cords with decades of inhaling the hot smoke of tobacco. She spoke to Alfonso in French, which he spoke reasonably well.

"Hello, my young friend," said the woman. "You are a Wanderer, aren't you?"

Alfonso spun around. The woman wore workman's overalls and a helmet with a miner's light. Her face was filthy with dust. She was middle-aged and rail thin. She inhaled the dregs of a cigarette with Chinese lettering around the butt and threw it to the dirt floor.

"What are you talking about?" asked Alfonso.

"I've been following you for the last several minutes," rasped the woman. "You have been sleepwalking with great speed and dexterity. You must be a Wanderer. Do not worry. I am a Wanderer too. There are several of us Dormians who have infiltrated the excavation crew."

Alfonso's mind was racing. This woman was apparently a Dormianâand not just that, she was a Wanderer. Very few Dormians ever left their native land. Every twelve years, however, on an occasion known as Great Wandering Day, a handful of Dormians called Wanderers were sent out into the world. They were an elite band of men and women who agreed never to return home or see their loved ones again, in order to protect the interests of Dormia abroad. He wondered whether he should tell her that he wasn't a Wandererâhe was something even rarer, a Great Sleeper.

"You are awfully young to be a Wanderer," continued the woman. "But, apparently, you have been drawn here like the others. Let me show you what we have found. My name is Sophie, by the way. Stick with me and no one will bother you."

Alfonso nodded appreciatively, but said nothing. Sophie led the way through the small wooden door and Alfonso followed closely behind her. His feet made a noise, as if they were stepping on something metal. He looked down and gasped. He was standing on a metal landing, near the top of a cavernous vaulted room. Several hundred feet below him, accessed by a slender staircase attached to the platform, was a giant hole in the ground. It was a perfect hexagon, lit up on all sides by electric torches. The hexagonal hole dropped into the earth as far as the eye could see.

A great throng of workers, perhaps as many as two hundred in total, were scurrying up and down ladders and working feverishly within the hole itselfâstringing up lights, collecting soil samples, taking photographs, and building a makeshift elevator that would descend into the hole.

"What is it?" asked Alfonso.

"We don't know," replied Sophie. "The catacombs that tourists like you visit were put here only in the last hundred years. Before that, all of Paris lay above a series of honeycombed mines. Perhaps this is part of that same honeycombed system, but I doubt it. The shapeâand depthâare so unusual. Other mine shafts go down a few hundred feet. They are also circular. This one is a perfect hexagon. It also goes down three miles, and then veers northeast toward France's border with Germany. Did you know that geologists have discovered other mine shafts just like this one in other citiesâPrague, Warsaw, Copenhagen, and Vienna? All of them burrow into the earth and then head in a northeastern direction. Spooky, isn't it?"

Alfonso stared at the hexagon. "All of them are the same shape?" he asked.

"Yes," replied Sophie. "Even stranger, the geologists have used carbon dating to determine that these shafts were all dug around the same timeâroughly two and a half thousand years ago. And this, curiously enough, coincides with a period in which a great darkness reigned over most of northern Eurasia."

"A darkness?" inquired Alfonso. There was a slight tremor of fear in his voice.

"Yes," replied Sophie matter-of-factly. "In the history books, apparently, this time is often described as the Cataclysm of Eurasia. They say, several millennia ago, ninety percent of the population of Europe and Asia died rather precipitously. The human race came close to being wiped out entirely in those two continents. The soil went completely barren. All plants withered. Starving men committed great atrocities and depravities. It made the Dark Ages seem positively enlightened. By all accounts, and there aren't many of them, it was an awful time."

On the riverside of promise by Vasileios Kalampakas
Oathbreaker by Amy Sumida
1 Margarita Nights by Phyllis Smallman
The Highlander's Bride by Michele Sinclair
Villiers Touch by Brian Garfield
The Vagina Ass of Lucifer Niggerbastard by Shawn Wunjo
Breakable You by Brian Morton
Death of a Hussy by Beaton, M.C.
Essence of Time by Liz Crowe
Travellers in Magic by Lisa Goldstein