“Not as much as I missed you. Wanna hear something funny? I snuck into your trailer and slept in your bed a couple of nights because the sheets smelled like you.”

Overwhelmed by her, by everything, wanting to take everything she offered before she changed her mind and snatched it back, Renner blurted, “Tierney. Marry me.”

Her eyes went wide. “You want to marry me? Not just live together?”

“Despite evidence to the contrary, I believe in marriage. Besides, third time’s a charm, right?”

She whapped him on the arm.

“Kiddin’. I want to spend every moment of the rest of my life with you as my wife. As soon as possible. Please marry me, Tierney Pratt.”

“Yes. God, yes.” She kissed him so sweetly that he didn’t realize she was crying until he felt his cheeks were wet. “But we’re not getting hitched in Vegas.”

T
he party was in full swing. The new Split Rock Ranch and Resort shareholders had invited everyone in the community to the celebration and grand reopening. Also, Willie had lined up a tribal elder to perform a Crow cleansing rite to put restless spirits at peace, not only around the structures, but also across the area that’d long been considered bad luck land. Tierney wasn’t sure she believed in that type of woo-woo Indian stuff, but she agreed it couldn’t hurt.

The Mud Lilies had turned the party into Tierney and Renner’s belated wedding reception. Bets were placed whether the happy couple would smash cake in each other’s faces, given the drink Tierney had thrown in Renner’s face that had started their romance ball rolling. It was funny now, to hear the comments from locals, that they “knew” Renner and Tierney were meant for each other from the start.

Two weeks ago, after a quick trip to the county courthouse to officially tie the knot, they drove to Chicago to pick up the rest of Tierney’s belongings from storage. They’d spent the weekend in the city, visiting Tierney’s old haunts. She’d introduced her husband to her friends Sari and Josie, which led to the inevitable question: did Renner have any hot-looking single cowboy friends in Wyoming?

The most important thing they’d done in Chicago was pay off the note in person. Tierney wanted to leave after that, but Renner insisted they meet with her father.

Gene Pratt was strangely subdued when his secretary ushered Renner and Tierney Jackson into his office. Renner gave him a copy of the paid-in-full loan receipt. Then he’d shaken her father’s hand, thanking him for the loan because it’d brought Tierney into his life and she was worth more than any amount of money.

“So are you pregnant yet?” Garnet demanded, pulling Tierney from her thoughts.

Maybelle looked like she wanted to throttle Garnet. “Do you remember our discussions about boundaries?”

“Yeah, yeah, yeah. I suppose that means as a part owner of the Split Rock I can’t demand the cowboys workin’ for us always wear hats, unbuttoned white shirts, tight Wranglers and spurs at public events?”

“Shoot. I guess I’d better apologize to Tobin. I chewed him out for bein’ out of uniform.”

Tierney bit back a laugh.

Maybelle whipped out her notebook after Garnet left. “For the record, as one of the new owners, will you be involved in the day-to-day operations of the Split Rock in your previous position?”

“I’ll be involved, since I’m a majority shareholder. Janie Lawson is general manager of the facility. Harper Turner is handling retail—in fact she’s expanding the entire store. Tobin Hale is heading up the new livestock breeding program. I’m focusing on building an independent financial consulting business, as well as supporting my husband”—she got such a thrill saying
my husband
—“in his endeavors to move his base of operations for Jackson Stock Contracting to Muddy Gap.”

His warm, hard chest pressed into her back and his mouth grazed her ear. “I couldn’t help but overhear . . . Are you pregnant, Mrs. Jackson?”

She turned into his arms. “We’ve been married less than a month and you’re already talking about babies?”

“Must be Hank and Lainie’s darlin’ little Brianna that’s putting thoughts in my head.” Renner kissed her. Seemed he was always kissing her in public just because he could. “I give Abe and Janie two months before she’s knocked up. So I’m just following the Lawson boys’ lead and giving you a heads-up that I wanna have babies with you, Tierney. Lots of them.”

“Where would we put all these babies? We live in a small cabin, remember?”

His brow furrowed. “I wish you’d let me build you a real house.”

“Some day. But for now, can’t we just be happy with what we’ve got? Being with you every night makes it more than a house; it makes it a real home. Our home.”

“And to think I never wanted to get tangled up with you.” Renner gave her the smile that was hers alone. “I love you.”

She toyed with the neckerchief he’d looped around his neck. “Oh yeah? The sooner we cut the cake, the sooner you can take me home and prove your undying love for me.”

“Such a tyrant. Come on, I bribed Garnet into putting extra sprinkles on the cake just for you. Because I have it on good authority that everything in life is better with sprinkles.”

“Damn sugar mouth. Gets you whatever you want.”

“And everything I’ve ever wanted is right in front of me.” Tierney kissed him. 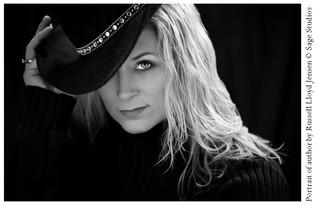 Don’t miss the next steamy
novel in the Blacktop Cowboys™ series
by Lorelei James,

Kyle Gilchrist pulled his cell phone away from his ear, staring at it as if it’d grown horns. “Ma, what the hell are you talkin’ about? You’ve always told me I was an immaculate conception. Or that you found me in the cabbage patch. Or that you were hit by a sperm-donor truck.”

“Kyle Dean Gilchrist, for once in your life, don’t be sarcastic. You need to come back to Wyoming as soon as possible. He wants to see you.”

“I can’t tell you.” A tiny sigh sounded. “Look. He wants to meet face-to-face. Talk to you in person. Explain a few things.”

Kyle’s resentment flared and he attempted to keep his tone even. “So why didn’t he call me himself if he’s suddenly all fired up to take on his daddy responsibilities to a grown man?”

“He doesn’t feel you two oughta hold this conversation over the phone. Plus, he’s on a respirator.”

“And why should I give two shits about him? Wasn’t like he ever gave a damn about me.”

“Believe it or not, he does care about you. He always has.”

“Why should I believe that?” He couldn’t keep the skepticism from his tone.

She blurted, “He’s leaving you an inheritance and he wants to discuss it with you.”

“He’s leaving you everything: the land, the cattle, the buildings, whatever cash is left over. Everything is yours. He had no other children. You’re his only heir.”

His father. An inheritance. This was beyond surreal. And Kyle thought last night had been an epic mindblower.

“Son? You still there?” his mother prompted.

The hotel door opened and she sauntered in. His pulse skipped a beat or seven, as it always did whenever he saw her.

She stopped by the bed and asked, “Kyle? Is everything all right?”

He shook his head, still trying to wrap his brain around the bizarre news.

His mother demanded, “Who’s that with you?”

“My wife,” Kyle drawled, keeping his eyes focused on the woman wearing his ring.

“Your wife? Since when do you get married and not tell me?”

“Don’t go there, Ma, not when you’ve dropped a bombshell about my alleged father.”

“Who is she?” his mother demanded again.

“I’ll make you a deal: I’ll give you her name if you give me my father’s name.”

“That’s what I thought. I’ll be in touch soon. Bye.” He hung up and tossed the phone aside, never breaking eye contact with the woman standing next to him.

“You gonna tell me what that was about? Especially blabbing the
my wife
part to your mother?”

“You
are
my wife, and it looks like we’re goin’ to meet the family sooner than we expected.”

“Oh no. Oh
hell
no.” She cocked her hands on her hips and glared at him. “We both agreed this was a drunken mistake and we’d get it annulled as soon as possible.”

Kyle gave her a very slow, very thorough once-over, letting the heat in his eyes serve as a reminder of their smokin’-hot wedding night. “You know, I’ve had time to think, and I don’t wanna get this marriage annulled.” He toasted her with his beer. “So pack your bags, kitten. We’re headed home to Wyoming. Tonight.”

Letters from the Inside by John Marsden
Primary Colors by Kathryn Shay
Barbara Silkstone - Wendy Darlin 03 - Cairo Caper by Barbara Silkstone
Emer's Quest (Manannan Trilogy) by Michele McGrath
Royal Date by Sariah Wilson
In the Shadows (The Club, #10) by M.A. Grant
Tormented by Robert J. Crane
Donners of the Dead by Karina Halle
The Healer by Daniel P. Mannix
How to Disappear by Ann Redisch Stampler