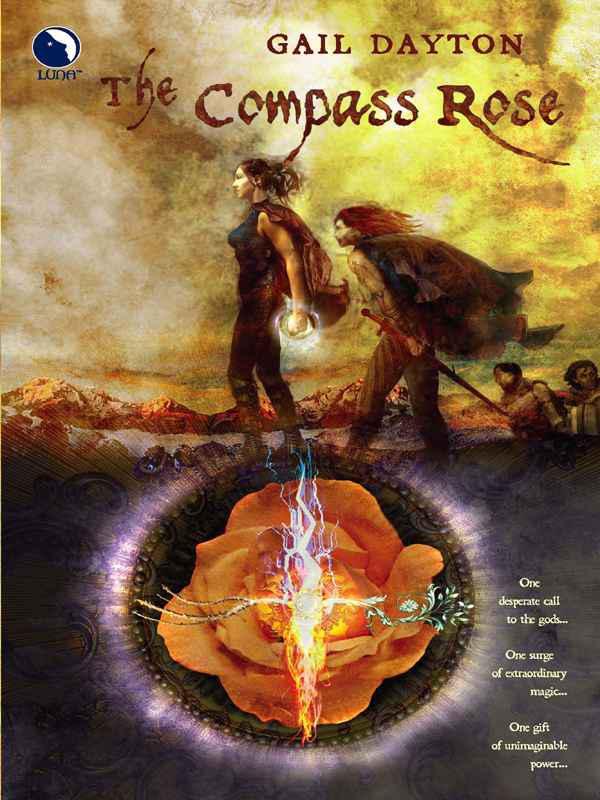 For Robert. Thanks for all the brainstorming help
and for paying attention when I told you
how much fun fantasy was. I’m glad you’re my kid.

And for Lindi. Keep at it. Dreams do come true. 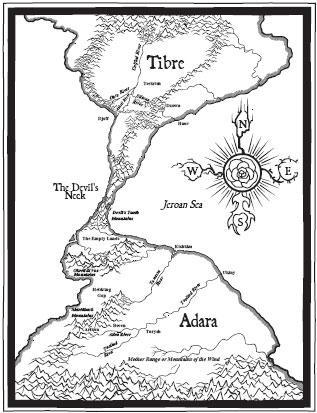 aila (aili)-
Sir or Madam, a title of respect in Adara

Boren-
town where the Alira becomes unnavigable, where the road to Arikon begins

Devil’s Tooth Mountains-
the mountains that make the Devil’s Neck impassable, habitable only in the lower southern reaches, above the Empty Lands

Djoff-
Tibran port on the western coast, at the mouth of the Athril

Empty Lands-
an ancient lava-flow desert on the northern edge of Adara, thought to have been created in the Demon Wars 2000 years ago, habitable if one is careful

Haav-
main port of Tibre, at the mouth of the Silixus River, easternmost of the rivers coming out of Tsekrish

Heldring Gap-
wide valley in west central Adara, famed for the mines on either flank, and the swords made there

ilian (iliani)-
four to twelve Adaran adults joined into a family unit, their version of marriage

Kishkim-
port city west of Ukiny, at the mouth of the Tunnassa River, known for its swamps and smugglers

Obre River-
westernmost branch of the Unified River, fast and full of rapids

Okreti di Vos Mountains-
the name means “Arms of God” in the ancient language; separated from the Devil’s Tooth range by a lava-flow desert and from the Shieldbacks by the Heldring Gap

prinsipality-
the province ruled by a prinsep

prinsipella-
the offspring (male or female) of a prinsep

Reinine-
the priestess-queen chosen by the collective Adaran prelates and prinsipi to rule Adara; a lifetime appointment, but not hereditary

Shieldback Mountains-
a western mountain range separated from the Mother Range by the Taolind and Alira River valleys and from the Okreti di Vos Mountains by the Heldring Gap, where Arikon is located

Silixus River-
important transport river in Tibre, easternmost of the three branches of the Unified River, the only one that empties into the Jeroan Sea

Tsekrish-
capital of Tibre, on the high central plateau where the Unified River breaks into three

Turysh-
Kallista’s hometown, at the confluence of the Taolind and Alira Rivers, also the name of a prinsipality, coat of arms: green tree surmounted by a gold crown

Ukiny-
port city on Adara’s northern coast, at the mouth of the Taolind River

T
he wind off the sea snapped the banners to attention on the city walls. It ripped at the edges of the captain’s tight queue and set the two white ribbons of her rank fluttering from her shoulders. Kallista Varyl tugged her tunic, blue for the direction of her magic, into better order. Yet one more time she wished that if she had to have North magic, she might have been given some more useful type. Directing winds, for instance.

Fortress Draconis by Michael A. Stackpole
The Frozen Beginning (Elemental Diamond Book 1) by Daphne Robynson
Tonight I Said Goodbye (St. Martin's Minotaur Mystery) by Michael Koryta
Torn (Trylle Trilogy, Book 2) by Amanda Hocking
Agent 21 by Ryan, Chris
Ask a Shadow to Dance by George, Linda
The Holiday Nanny by Lois Richer
How To Host a Seduction by Jeanie London
Heartman: A Missing Girl, A Broken Man, A Race Against Time by M.P. Wright
One Night in His Custody by Fowler, Teri