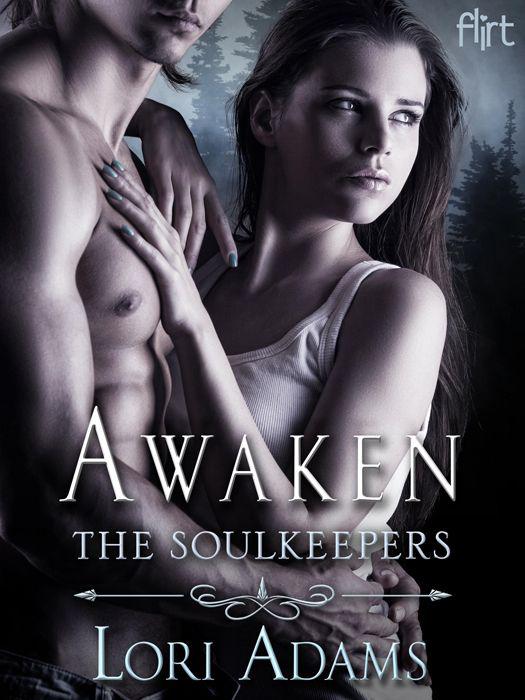 Awaken
is a work of fiction. Names, places, and incidents either are products of the author’s imagination or are used fictitiously. Any resemblance to actual events, locales, or persons, living or dead, is entirely coincidental.

FLIRT and the H
OUSE
colophon are trademarks of Random House LLC.

This book contains an excerpt from the first book in The Soulkeepers trilogy,
Forbidden
, by Lori Adams.

Chapter 1
A Lady in Waiting

I clutch the gun to my chest and carefully slide my finger over the trigger. The constant throbbing of my second heartbeat is distracting and making me tremble. With my back pressed against a tree, I should feel the gnarled bark cutting at my shoulder blades but I don’t. It’s early December in Haven Hurst, Connecticut, and an unforeseen snow squall caught everyone off guard. I don’t feel anything but cold … and fear.

I exhale a cloud and scan the woods. I can sense someone out there. Watching. Waiting.

All around is an army of winter trees, frozen dead soldiers stuck in the very places they died. The squall ended two days ago but left snow packed on branches like a burden they can’t shake loose. The battleground is mounds of smooth white drifts, tempting the child in me to dive in and frolic. Lay flat and make wings. But I can’t. I am not alone. I am being hunted.

It’s an understanding that sprouts desperation and a need for sanctuary. A high snowbank thirty yards to my right will do nicely. If I can reach it.

I scan the woods again with the unmistakable feeling that the frost has eyes, and I am being watched by something or someone hiding in plain sight. It’s such a familiar sensation, and yet … I don’t know what name to put to it, so I concentrate on the murmur of low voices behind me. I hold my breath, straining to hear.

“You aren’t really going to kill her? Are you?” Raph demands.

Shit
. I squeeze my eyes shut.
I don’t really wanna hear this. Do I?

I reach down with my free hand and tap the iPhone in my pocket. My music is set to play “All Hail Santa” by the Anti-Heros.

If I’m gonna die, it might as well be to the sound of angsty holiday music. Right?

I listen to the brief intro while mapping out my course over the uneven terrain. It’ll be disorderly at best, trampling over things I can’t see and sinking into things that can’t accommodate me. Nature has conspired against me. I am forever intruding on life.

When the screaming blasts in my earbuds, I jolt into action and take off running.
The virgin snow is not smooth and penetrating; it’s packed and crunchy under my boots—the earth’s hard crust that I was not engineered to overcome. The sound is horrifying for someone trying to sneak. I’m doomed.

A black streak flashes in my peripheral; they’re coming. Fear rises in me because they move with unnatural speed.

I navigate haphazardly around misshapen lumps and scrappy saplings determined to slow my progress. The wall of snow is less than ten yards away. Almost there.

When I’m within range, I bound off a log and launch myself over the wall of snow. I sail parallel to the ground and then fling out my right arm, firing with reckless abandon. I rotate a quarter turn just as two shots slam into my chest. One stops my music and the other knocks the wind out of me and I rotate again, faceup. My body is splayed like a sacrifice, and I glimpse the bright blue sky as I land—not on the ground, but on a pile of writhing bodies.

“What the hell, Sophia?” Duffy hollers from somewhere beneath me. Angry muffled voices shout and curse at me. I have inadvertently flung myself onto the gang’s mosh pit of a hiding spot.

“Sorry! Sorry!” I ride the wave of people jostling me to the edge, where I’m unceremoniously dumped to the ground. “Oomph!”

Six of my friends—Bailey, Rachel, Duffy, J.D., Holden, and Casey James—are a pile of fat ski jackets and chunky boots. As usual, they have congregated to form a team without telling me.

“Somebody’s got a hand on my ass!” Casey yells from the tangled heap.

“Not me!” Bailey says, jerking her hand back.

“Who said I didn’t like it?” Casey grumbles, and everybody laughs.

The bodies crawl apart and sit back, staring at one another. Well, mostly staring at me. I’ve blown their cover by invading their frozen foxhole. Everyone is sporting splattered paint. But again, mostly me.

A burst of laughter brings all eyes up, and there are Michael and Raph standing over us with their paintball guns. Their pale blue eyes practically glow with amusement. The sun illuminates their blond hair like halos, reminding me of their true identities; they are angels.
Real
guardian angels living right here in Haven Hurst.

I discovered their secret a couple of months ago, and now I can’t see them as anything but truly mystical beings. I’m amazed the others can’t tell.

Of course, it doesn’t help that Michael and Raph are a bit cocky and laughing at us losers covered in paint splotches. As usual, neither of them shows a drop of paint.

“Hey, look!” I cry optimistically. “Michael only hit me twice!” I show off the two red splotches on my jacket like war ribbons. It’s an amazing feat, considering how many rounds I heard flying past me.

“Well, hell, Sophia,
everybody
hit you twice,” J.D. teases, and they all laugh again. I slump and inspect myself. This is true. I have more paint than Sherwin-Williams.

“Somebody even got you in the foot.” Rachael points and we all look.

“Oh, no, that one’s mine,” I mumble. Michael breaks up laughing, again, and I shoot him a warning look. Michael Patronus may be a 6’3 guardian angel trained to protect human souls but he is also my boyfriend. His laughter slowly fades until he is giving me a hard, penetrating look that makes my tummy shiver. He has the strangest effect on me, without even physically touching me. Because we have to keep our feelings secret from the others, Michael can’t come over and help me up. It’s Raph who takes my arm and hauls me to my feet.

“You okay?” he asks, throwing his brother a reprimanding look. Michael remains impassive, his eyes never leaving mine.

“Yeah. Thanks, Raph.” I smile smugly at Michael while Raph brushes snow from my shoulders. Michael cocks a sexy eyebrow that tells me I’d better watch myself.

The game is over, so we all fall in line and sludge through the woods, heading back into town. It’s times like this that I hate keeping my feelings for Michael a secret. I know it’s forbidden for an angel to love a human; I understand Michael would be called before The Council of Guardians and sent back to Heaven, but sometimes a girl just wants to hold hands with the guy she loves.

Everyone is chatting about lost opportunities to beat Michael or Raph, and strategizing for next time. I’m not listening. I’m thinking about my time alone in the woods when I was sure someone was watching me. If my friends were hiding in the foxhole and Michael and Raph were behind me, who had I sensed out there?

My second heartbeat grows stronger, indicating that Michael is walking close behind. No longer a pain in my chest, our unique connection is comforting, and I soon forget my suspicions. Then I feel three gentle tugs at my heart; Michael is using his supernatural kinetic link to say:
I. Love. You
.

I smile. Loving a guy like Michael is like swallowing the moon; I’m glowing on the inside.

“Hey, Sophia?” Michael says in his casual
We are just friends
voice.

“Yes, Michael?” I answer in my best
I don’t love you
tone.

“You suck at paintball.”

“You’re buying
again
.” He swings an arm around Bailey’s shoulders and rubs invisible money between his fingers and thumb. Bailey gives me a sympathetic look.

“Lara Croft wouldn’t have shot herself in the foot, Soph.”

Ouch
. Bailey hits my hero where it hurts.

Losing at paintball is getting expensive, and I wonder if the Soda Shoppe will take Dad’s debit card.

We stroll down the middle of Park Street, cross Heartstone, and troop into the park that is the heart of the town square. Haven Hurst is a quintessential small town and heavy into tourism. Flanking the park is an array of old-timey shops: the Naughty Nectar Café, the Aunt Tik furniture store, the Hickory Stick, the Words ’N Water bookstore, and the Soda Shoppe at the far corner. Opposite are Viktor Vogue’s Haberdashery, the Sugar Shack, and the Cut ’N Dye hair salon. At one end of the square is Hadley’s Market, where I do all the shopping for me and Dad. At the other end is the courthouse. I have a keen dislike for the old Federal-style building with its red brick and white columns. Last Halloween night, three demons—Dante, Vaughn Raider, and Wolfgang—took my dad to the third floor of the courthouse and tried to Take his soul. Actually, it was mine they really wanted.

Anyway, that’s the night everything changed. Back in LA, I had dated a loser named Steve. He got abusive, and then, before I knew what was happening, we moved to Connecticut. It wasn’t so strange to pick up and move; Dad is a pastor and we move around all the time. What I didn’t know was that Dad had intentionally run over Steve with the car. Killed him, but the whole thing was really my fault. I should’ve listened when Dad said Steve wasn’t good for me. When the demons found us in Haven Hurst, I sure as hell wasn’t going to let them take Dad’s soul for a mistake that
I
made. So I made a bargain with Dante, the demon who claimed to love me. The one who insisted that we shared a past life together. Dante believed my soul was the reincarnated soul of his lost lover, so he was only too happy to accept my soul instead of Dad’s. Dante administered the kiss of death and killed me. While I waited for Dante at the spiritual Borderland, Mom appeared. She died two years ago, and it was so good to see her again! But she told me I was Taken before my time. She said I was a spiritual warrior—something called a spirit walker—and I was experiencing the first signs of my Awakening. I needed to return to Earth to begin my training so I could help lost souls cross over. All this came as a shock to me. I wanted to stay with Mom. But then her friend, some frosty, spiritual guy named Armaros, appeared. He helped me resist going down to Hell with Dante. Michael,
Raph, and their brother Gabe, drew my soul back into my body, and here I am.