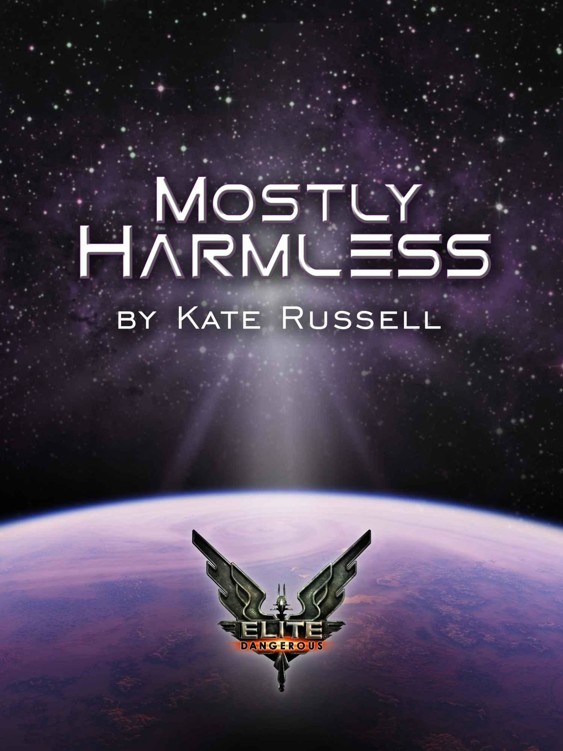 Based on the space trading game Elite: Dangerous by Frontier Developments.

book has been asserted by her in accordance with the Copyright,

All rights reserved. No part of this publication may be reproduced, stored in or introduced into a retrieval system or transmitted, in any form, or by any means (electronic, mechanical, photocopying, recording or otherwise) without the prior written permission of the publisher or unless such copying is done under a current Copyright Licensing Agency license. Any person who does any unauthorised act in relation to this publication may be liable to criminal prosecution and civil claims for damages.

‘Elite’, the Elite logo, the Elite: Dangerous logo, ‘Frontier’ and the Frontier logo are registered trademarks of Frontier Developments plc. All rights reserved. All other trademarks and copyright are acknowledged as the property of their respective owners.

I dedicate this story to 811 strangers from the internet. I wrote it with the sole purpose of entertaining you. I hope it does.

These credits are broken down into various levels of support, for each of which I am truly grateful.

These charming souls pledged the most out of all my backers, for the pleasure of naming a character whose fate was to die a grisly death.

This wonderful crew have been by my side every step of the way with advice and support in my Google Plus 'Nosy Parkers' forum. As well as offering support and encouragement they have helped me massively with certain creative points too. Thank you, all of you.

This group completely blew me away with their generosity in pledging to Elite: Mostly Harmless for no other input than just a mention in the credits… so here it is - and by the way you rock!

These backers named a character and game me some personality traits to include. It was a lot of fun developing these characters and weaving them in to the plot.

Bill Irving wanted me to include a 'special electric guitar'

Terry Walton asked for a mention for his 'Wayout Walton Westies'

Andrew Sayers wanted nothing more than to see Angel spend time in a bar in Slough - and who am I to argue with that?
Creatively challenged enthusiasts:

With no more spots for random input these brilliant people still decided to pledge at the level for just a thank you in the credits. So, THANK YOU!

All my generous backers:

The great unwashed readership of Elite: Mostly Harmless. I thank you all for your support and hope you enjoy this book that you helped create.

I was once cornered by a disciple of the Church of Scientology in a shopping centre in Slough. It was a rainy, Tuesday afternoon and his strategy to tempt me into the fold of the religion was to make me realise how rubbish and unfulfilled my life was. The short interview with the weasel-faced man, conducted under the shelter of a Greggs Bakery doorway with the smell of fresh sausage rolls wafting around my face
made me realise two things: I have a pretty awesome life, and I never want to go back to Slough.

The Slough of Despond in John Bunyan's allegory The Pilgrim's Progress (1678):

'This miry slough is such a place as cannot be mended; it is the descent whither the scum and filth that attends conviction for sin doth continually run, and therefore is it called “the slough of despond”: for still as the sinner is awakened about his lost condition, there ariseth in his soul many fears, and doubts, and discouraging apprehensions, which all of them get together, and settle in this place; and this is the reason of the badness of this ground.’

Angel rebooted the nav-panel as she watched the riveted maw of the space station hurtling towards her through the heads-up display.

‘Hope, don’t fail me now,’ she said through gritted teeth as she grappled with the roll and yaw levers, scissoring them apart at the same time as pumping on alternate thrusters to jiggle her rear end into line.

Hope. That was a laugh,
thought Angel with about as much humour as a hologram in a power cut. Her mother had named the Cobra
Hope Falls
after the district she grew up in back on New Saturn, forty light years away. It often seemed like more of a narrative to Angel than a ship’s name.

‘You need to straighten up Commander, and you’re coming in too fast.’

Angel could hear the rising tension in the controller’s voice as she thumped the power supply, cursing at it through tight lips. It crackled indignantly and the nav-panel finally winked on again, the holographic view of her approach wiring itself back together on the dash right in front of her eyes.

‘I know. Calm down Rachel. I just lost my eyes for a sec. Everything’s under control.’

Angel used her left foot to toe the thrusters into reverse. Engines roared and the outer hull moaned. ‘Don’t expect me to dock from this angle without hammering the shields,’ it seemed to be saying.

Angel stamped harder on the thruster and leant into the starboard roll. The irony was if she could get the damn thing into port any time soon without busting up her equipment she might be able to afford a new docking computer; her last one had been knocked out in the backwash of a kinetic blast when she’d jumped out of hyperspace right in the middle of a raging battle between an Imperial Cruiser and a band of heavily armed pirates.

She could see the engineer’s face through the control deck window now, bleached out by halogen lamps and worry. Neon ad-hoardings outside the window screamed at Angel to “GET RUNNING LEAN WITH JPS EMTEEC-EXOBYTE SCL411 SPIKES TODAY!”, or “INSIST ON ANTHONY COLIN’S TAL-TIES FOR UNBEATABLE DENTAL FUSION!” They flushed the pale face in the control window on and off with vivid red as her dark eyes flipped back and forth between the desk and the rapidly approaching vessel. Her equally red lips made an ‘o’ that looked like it was expecting trouble.

Resigned now to at least some structural damage she flipped a couple of switches and reached for her EVA helmet, twisting it into place around her neck. It was old and grubby but if push came to shove and she breached the hull at least she wouldn’t waste a remlok survival mask too; those things were painful expensive to recharge. The helmet hissed and her ears popped as the bay controller retreated behind several feet of solid lead. She was on her own now as she hurtled towards the cavernous docking hangar.

Her arm muscles burned, the atrophy of three months at space making it much harder to stay in control as she fought to keep the ship’s rotation in absolute sync with the station. As little as two-degrees off and you’re vapour; even deploying an escape pod would be pointless as it would just ricochet off the edge of the letterbox entrance to the spaceport, cracking open like an egg as the rest of the ship exploded about your ears.

The Girl They Sold to the Moon by Chris Stevenson
Joining the Party by Dragon, Cheryl
Bound by Shadow by Anna Windsor
The CEO's Fantasy (The Billionaire Bachelors Series) by RG Alexander
Three Weeks With My Brother by Nicholas Sparks, Micah Sparks
The Hidden by Bill Pronzini
Daisies Are Forever by Liz Tolsma
A Patriot's History of the Modern World by Larry Schweikart, Dave Dougherty
Gandhi Before India by Guha, Ramachandra
Captain Future 07 - The Magician of Mars (Summer 1941) by Edmond Hamilton