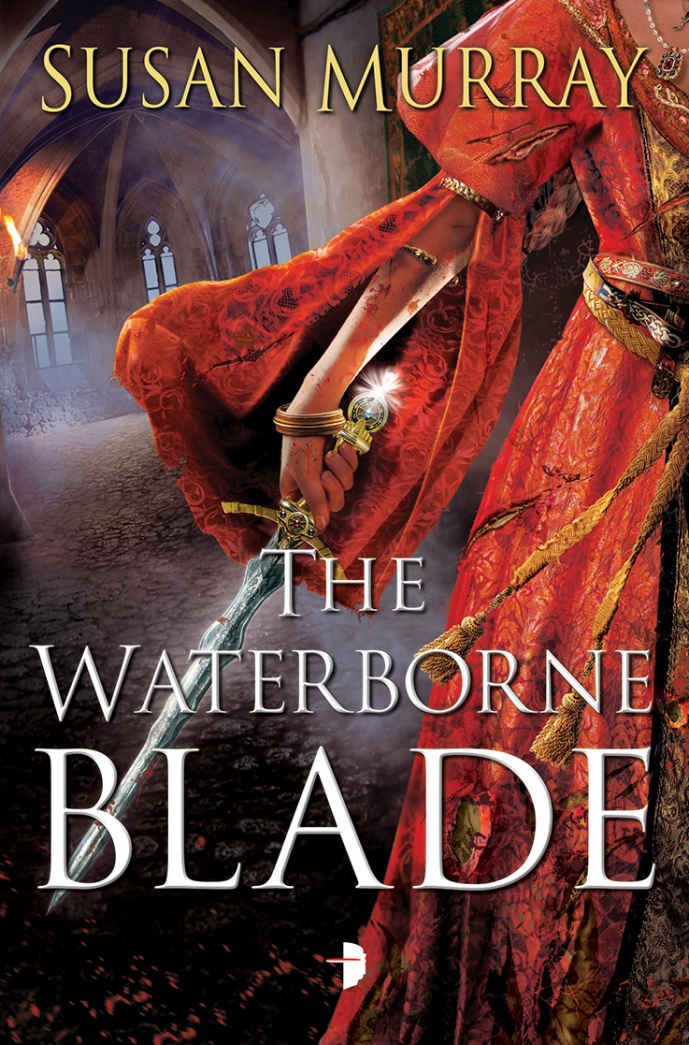 To my parents, with heartfelt thanks for the weekly trips to the library

CHAPTER ONE HUNDRED ONE

By the time Weaver reached the anteroom to the king’s chamber, the clammy chill of rain-soaked linen had seeped through to his very bones. The roaring fire in the grate there did little to fend it off, serving only to sting his face where it wasn’t protected by several days’ growth of beard. He ignored the pointed stares from the few courtiers who were about at that time in the evening. He’d sooner have paused for refreshment and dry clothing, but his orders had been clear.

The guard at the door stepped forward, blocking his path. “Halt, and state your business.”

“My business is with the king and no one else.”

The soldier looked taken aback, but held his ground. “The king is in session with his council and I’m to admit no one.”

Another recruit from the north, still wet behind the ears. There were too many like him garrisoning the citadel at present, none of them equipped to face the challenges that lay ahead.

“Step aside, you fool. I’m Ranald Weaver, King’s Man. The king and his council await my report. Will you explain to him the cause for delay?”

The soldier’s jaw dropped. “I… I beg your pardon, sir.” He stepped back and fumbled the door open, announcing Weaver’s arrival.

Tresilian looked up from the table where he presided over his council. The king’s was the youngest face of those assembled there. “Ah, Weaver. You will excuse me for a few minutes, gentlemen.” Tresilian scraped back his chair and stood.

The courtier seated to his left protested. “Sire, ought we not all hear this report without delay?” Closer to Tresilian’s age than the other advisors, his elaborate sleeves trailed in wine spilled on the table next to his glass.

Tresilian stared him down. “Urgent as the situation is, Stanton, I shall hear this report through first, without interruption or cavilling.”

Stanton inclined his head with an open-handed gesture of submission. “As you wish, sire. It is, of course, your prerogative.”

“Prerogative be damned. Await my return here.” With a glance at Weaver the king led the way to private quarters beyond the council chamber.

Servants opened and closed the door in silence, leaving the two alone together.

Tresilian looked as if he’d hardly slept in the days Weaver had been away. Small wonder, with fools like that to advise him.

Tresilian raised a hand. “Never mind all that. Do you have a new name to give me?”

“No, sire. My money’s still on Stanton.”

Tresilian turned away to a side table and filled two goblets with wine from an ornate decanter. “Dare I hope you bring proof?”

Tresilian handed one glass to Weaver, then flung himself into a chair, sprawling there irritably. “Damn the fellow, he’s been pettifogging and whining all day. He’s got too many supporters to risk a wrong move now.” He rubbed his eyes and waved a hand towards the chair opposite. “Sit down, then. Take a drink. Tell me the rest – it’s bad, isn’t it?”

Weaver removed his sodden cloak and dropped it over the settle by the fire, then drew out the chair Tresilian indicated and sat. He hadn’t seen his king look so defeated in a long time. Not since he’d learned of the death of his father. “It’s bad. Vasic’s army has crossed the river.” He drew his glass closer across the table. “Their scouts may be in the pass already. I saw campfires half a day’s ride from here.”

Tresilian sank his head in his hands, then looked up again. “Numbers?”

“Five, perhaps six thousand. There were regular messengers passing to and from the south, so probably more.”

Tresilian took a mouthful of wine. “Anything else I should know?”

“He has several units of southern mercenaries.”

Weaver swallowed down more wine, realising how parched his throat was.

Tresilian stretched back in his chair, easing knotted shoulders and neck. “Advice?”

“Horse shit. I need someone to tell me straight, Ranald. Those old women next door won’t.”

Weaver drew in his breath. “You’ll need to recall the garrisons from the east. There’s a fair chance of holding Highkell until they arrive. A better chance if you lock up Stanton and his cronies tonight.”

“Ever the diplomat, eh, my friend?” For a moment Tresilian smiled. “I understand what you are saying about Master Stanton, I do. But there’s something I must see to first.”

Weaver shrugged. “Lock him up, and everyone he drinks with, games with, talks with. You are king. Don’t leave it to chance.” He drained his glass.

“That would be half the court. And all on no more proof than that.” Tresilian raised his hand and snapped his fingers.

Weaver lowered his eyes. He might be no diplomat, but he knew this wasn’t the time to test the limits of their friendship. “What would you have me do now, sire? Take a unit east to marshal the garrisons, or deal with Stanton?” He’d need a clear head if he was setting off again in a few hours. Weaver slid his empty glass into the middle of the table, noticing for the first time an incongruous bundle of homespun clothing sitting there.

Weaver looked up sharply. “Neither?”

“I’ll deal with him. But first I have another task for you to carry out.” He paused, as if gauging Weaver’s reaction. “Tonight.”

What could be so urgent? Someone must have proved even less faithful than Stanton.

Tresilian emptied his own glass and set it down with deliberation. “I want you to take Alwenna away to sanctuary at Vorrahan. She’ll be safe there.”

Weaver gaped at him. “But, sire, you’ll need me here. Old Clarin’s reliable. He’d be a better choice to escort her party. I’m a soldier, not a courtier.”

“This won’t be some courtly procession to draw attention. You’ll travel fast, in secret. No one will even know she’s gone. Not until, Goddess willing, she’s safe behind the precinct walls.”

“I’m not a fit escort for the lady, sire. Don’t ask it of me, I beg you.” A sharp pain bit behind Weaver’s eyes. He knew better than to swill strong wine on an empty stomach. One day, he’d set down a glass before it was empty. One day, but not this day.

Tresilian watched him with the sort of intensity Weaver had last seen before they were due to go into battle. “You’re the only one I can trust with this. I want to put the breadth of Highground between my wife and Vasic. Must I remind you of your oath?”

A King’s Man swore a lifetime’s obedience to his monarch. But that was about soldiering. Not… this. “Sire, please reconsider.”

“You’re by far the ablest for the task. I have too much at stake to risk her safety now. Swear you’ll do this.” Half-rising from his chair, he planted his hands on the table and leaned over, his gaze intense. “Swear you’ll keep her safe, Ranald.”

Weaver lowered his head. “I swear it.”

“Thank you, my friend. That’s a weight off my mind.” Tresilian shoved his chair back and strode over to the door at the back of the room, which opened onto the newel staircase leading up to his private chambers. A bored servant stationed there straightened up hastily.

“Summon the Lady Alwenna to my presence. Without delay.”

Tresilian closed the door and returned to the table. He picked up a map scroll and pushed aside the bundle of clothing so he could open out the map, weighting the corners with the empty glasses and sliding a candle branch over to see better. “So, what will you need? My best horses are at your disposal.”

Weaver stood up to study the map, rubbing the back of his neck. “If we’re to avoid notice, my own remounts will be more suitable. We’d be taking poor roads, crossing hard terrain… Are you sure about this?”

A shadow crossed Tresilian’s face, before he smiled tightly. “As sure as if my own life depended upon it.”

The odour of damp wool mingled with horse sweat hit Alwenna the moment she stepped into the king’s chamber. A sodden travelling cloak had been thrown onto the settle, water dripping onto the flagstones beneath it. It was a commoner’s garment, yet its owner stood at the king’s side. The pair of them stooped over the table, engrossed in discussion of a map. None of Tresilian’s appointed advisors were present. Alwenna stepped further into the room and the servant withdrew, closing the door with a clatter.

Eve: In the Beginning by H. B. Moore, Heather B. Moore
Liron's Melody by Brieanna Robertson
Murder on the Thirteenth by A.E. Eddenden
Forks Over Knives: The Cookbook by Del Sroufe
Go Set a Watchman by Harper Lee
Benny Uncovers a Mystery by Gertrude Warner
Chastity by Elaine Barbieri
The Plague Dogs by Richard Adams
Breaking the Storm by Sedona Venez
Obsessive Compulsive Disorder by Polly Waite