10 Ways to Steal Your Lover 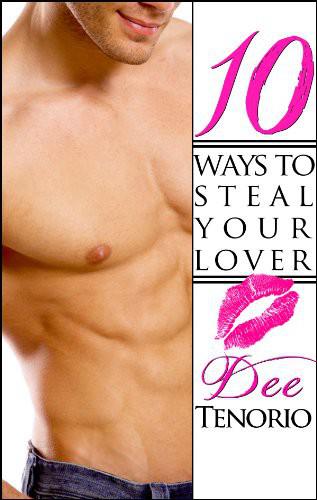 His best friend's wedding just turned into
the craziest hangover ever...

Kane
Wilkensen's
buddy was about to marry the girl of
Kane's dreams. Which would have been fine—heartbreaking but fine—if Kane hadn't
woken up in a Las Vegas honeymoon suite with her, a giant sack of money and a
great big blank spot in both their memories first.

He'd
always thought a good man would never steal his best friend's lover, but one
crazy night may be just the chance Kane needs to show his "wife" that
she's with the right husband after all...

10 Ways To Steal Your Lover

eBooks are
not transferrable. They cannot be sold, shared or given away as it is an
infringement on the copyright of these works.

This book is an original publication of
the author who wrote the story herein contained.

This is a work of fiction. Names,
characters, places and incidents are either the product of the author’s
imagination or are used fictitiously, and any resemblance to persons, living or
dead, actual events or locales is entirely coincidental.

“10 Ways To Steal Your Lover” by Dee Tenorio
copyright © 2011 by Darlene Tenorio.

This book has been published by Dee Tenorio
at Smashwords.

All Rights Are Reserved.

No part of this book may be reproduced,
scanned, or distributed in any printed or electronic form without permission,
except in the case of brief quotations embodied in critical articles and
reviews.

Please do not participate in or encourage
piracy of copyrighted materials in violation of the authors’ rights. Purchase
only authorized editions.

For Sharon, who advises, laughs with (and
at) me and more importantly, has no compunction whatsoever about kicking my ass
when needed.

The sex-laden voice, rough and demanding,
roused Delilah from sleep. Without opening her eyes, a smile—already well-satisfied—curved
her lips. Her head gave a dull ache but it was lost in the wash of sensation as
strong, firm hands took control of her hips, lifting her up onto legs still shaky
from the last loving. She rubbed her face against the pillow, almost
embarrassed by the rush of heat and need that arrowed down to the open folds of
her sex. Folds that even now grew plumper, slicker, beneath the intensity of a
gaze she could feel like a stroke of his tongue.

She wanted that tongue. Again. Feeling
wanton, almost powerful, she stirred her hips for him slowly waving from left
to right and back again.

His grip tightened, but he did nothing to
stop her. "I've waited years to look at you just like this."

She almost laughed. She'd never had a
problem with his looking, but Craig almost never wanted her positioned like
this anymore. The last month or so, he'd barely even touched her…

Delilah frowned, her fuzzy brain trying
to remember something, something important. She stared down at her hands, her
fingers knotted in the sheets, focusing on the rings on her finger. Not the
silver band Craig had given her six months ago. Not the pale sapphire he’d said
matched her eyes. Instead a clear diamond, marquis-shaped, bound by gleaming
gold and a matching smooth band next to it, resting where Craig’s ring should
have been. She blinked at it, confused how it got there, when the heat of his
open mouth came down on the highest curve of her unturned ass. Synapses fired
like the fountains outside their hotel and the thought was gone.

She lifted higher for him, crying into
the pillow with a voice gone half-hoarse. He ate at her flesh, licking and
suckling hard enough to leave a mark and send her nerve endings into paroxysms.
Up over her hip, along the sensitive nip of her waist, along the indent of her
spine as one hand reached beneath her and cupped her aching breast. She jerked
against his mouth, shocked at her own unexpected reaction, torn between feeling
too much and wanting even more.

She'd been with Craig for three years,
but not once in all that time had he devoured her like this. Had he set her on fire
like this. Though she’d always crushed the stray, not-quite-sated thoughts from
her head, this time she couldn’t get over how every part of her body felt at
this moment. Alive. Tingling. As if he’d spent the entire night wringing
pleasure from every single inch of her and still wanted more. Made her want
more. Why now? Because they’d finally gotten married last night?

Wait, wait a second, the ceremony had
been set for morning—so why did she remember stars overhead? A gazebo? What the
hell—

Blunt fingertips dragged over one side of
her ass, obliterating her questions and leaving fading furrows in her skin
heading inexorably for her sex. She moaned as he repositioned her knees on top
of some pillows. Utterly lost in the feel of those callused hands moving over
her, stroking the pouting lips up one side and down the other.

Slowly. Teasingly. Parting them to dip
inside, drawing the moisture he found into mind-bending circles around her
opening… She arched higher, desperate to deepen the stroke for him.

Which only made him laugh.

Right before he sank two fingers deep
into her.

Delilah shuddered, her legs nearly giving
out in relief, her internal muscles rippling around his surging touch. Again
and again he pumped his fingers, taking the relief and heightening her need
with it until she felt like mass of desperation.

“So close already,” he crooned, laying
his hard body over her so he could rumble in her ear. She blinked, his voice
sending flickers of recognition through her. Craig’s body wasn’t soft, but it
wasn’t the hot, rippling steel flexing against her bare back. His fingers
delved again, stroking her once, twice, before pulling out and leaving her
empty, but not for long.

Even as she moaned, he began to push
inside her. Thick flesh, hot and rigid, moved through her folds with a
carefulness that belied his earlier aggression. She took him in smoothly, her
body already familiar with the feel of him.

She pushed back against him, so
deliciously full of him she couldn’t manage a deep breath. Panting, she closed
her eyes, torn between the screaming passion threatening to burn her up or
pushing past the cottony blocks of her memory. He seemed to understand the
precipice she balanced on, remaining perfectly still, perfectly buried within
her.

If only it could stay like this forever.
She didn’t want to think. Didn’t want to break this sensual spell. Didn’t want
to open her eyes and realize that the man behind her wasn’t her fiancé.

Or that she didn’t care.

Delilah cried out, lifting her head. The
only truth that mattered right now was how much she needed him. Powerful thighs
flexed against her own as he began to move. He reached for her, pulling her up,
against his chest, his hands clasping her breasts, mouth open on the back of
her neck. He drew hard, pumping up into her relentlessly, meeting her rocking
motion back to him. Her head fell back on his shoulder, her own hands latching
over his. Their fingers wove together, their bodies moving as if they’d been
lovers for years.

As if they’d been made for each other.

She opened her eyes, heavy though the
lids were, when she felt him staring at her with that smoldering green gaze. A
gaze that had always followed her, always made her feel like everyone around
her could see the lies she told herself and everyone else to get through each
day. That stare cut her open every time it caressed her face, demanding her
honesty though the man himself never once uttered a word to ensure she gave it.
In three years, that gaze never failed to make her cheeks flame and her body
tingle in ways it shouldn’t.

It didn’t do any good to avoid him now,
she already knew who he was.

The best man at her wedding.

Kane
stared into Delilah’s passion-laden blue eyes and felt that tightening in his
chest again. The one he always felt when she managed to meet his stare. The
soft weight of her breasts filed his hands as they had in so many other
fantasies, the taut pink tips slotted between their twined fingers waiting to
be teased. Even better, the wet glove of her pussy squeezed his cock with every
roll of her hips, her ass sliding against his bely like hot silk. He pistoned
into her, over and over, each deep thrust wetter, tighter, flat-out fucking
better than the last.

As wet dreams went, this one had to be
the best and he’d had years of them to compare to. He could actually taste her
this time, smell her and the musky heat of sex in the air. Her hair even fell
over his shoulder to tickle his back. He had it bad for those inky black
tresses that always seemed to catch light that wasn’t even in the room and
gleam back at him.

Each bit of her was something he wanted
to look at, study and apply to memory for all time. He wanted to see his cock driving
in and out between the smooth lips of her pussy. Wanted to watch his hands
plucking the candy-colored nipples until she begged him to lick them, suck
them. He wanted to see if there was a mirror anywhere that would allow him to
see all the angles while he fucked her into screaming oblivion.

But he couldn’t tear himself from that
steady, gem-colored gaze.

Her mouth opened, just a little, as she
gasped with each thrust.

Her hand rose, sliding over his jaw,
running through the bristles of his morning beard. She held him like that; a
gentle, loving touch amidst the raw fucking he couldn’t begin to slow down. It
didn’t fit somehow, despite feeling utterly amazing. As if she really were
there, no matter how impossible that was. Apart from her marrying Craig, his
dreams of her were never gentle. They were fervent, unrestrained to the point
of being damn near desperate. Only here was he free to take her over and over,
never worrying about hurting her or scaring her with his overt sexuality. Never
having to see that glint of attraction in her eyes get snuffed out by
dismissal.