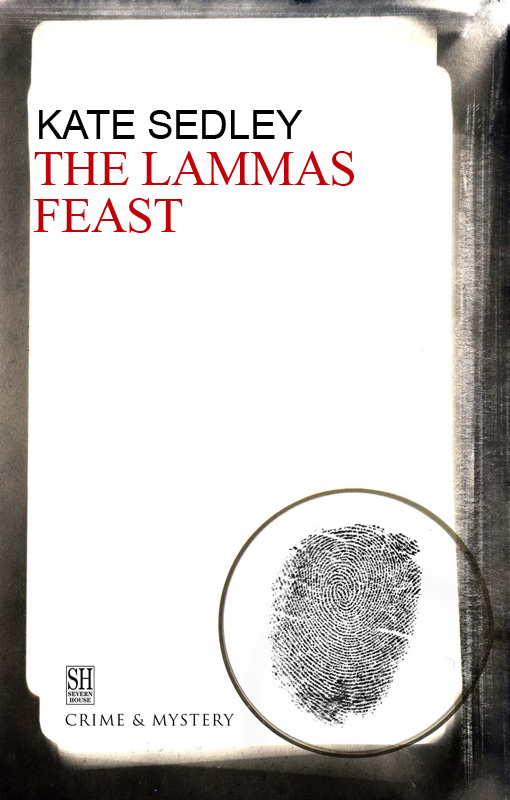 DEATH AND THE CHAPMAN

THE EVE OF SAINT HYACINTH

THE BROTHERS OF GLASTONBURY

THE THREE KINGS OF COLOGNE

THE DANCE OF DEATH

First published in Great Britain and the USA 2002 by

The right of Kate Sedley to be identified as the author of this work has been asserted in accordance with the Copyright, Designs & Patents Act 1988.

The Lammas feast. – (A Roger the Chapman mediaeval mystery)

‘
I
f I hear those four words again,’ my wife said, the severity of her tone belied by the smile in her eyes, ‘I shall very probably scream, and that will be bad for the baby.’

As she spoke, she glanced down at the dark head nestling against her breast, and at the little rosebud mouth sucking at the nipple as though his life depended upon it. At three weeks old, our son, Adam, showed every sign of being as big a guzzler and as keen a trencherman as his father; a fact that Adela was not slow to point out to me.

‘He’s going to be greedy, like you, Roger,’ she would tease affectionately, ruffling my hair, which she knew I liked.

‘Well, at least we shall have something in common,’ was my invariable answer.

There was no doubt that in looks, Adam – small-boned with dark hair and eyes – most nearly resembled his half-brother, Nicholas, Adela’s son by her first husband, and was nothing like myself or his half-sister Elizabeth, my daughter by my first wife. We two were both big, fair-haired and blue-eyed.

Strangers to Bristol who knew nothing of our family history were frankly puzzled by the relationship between the two elder children. My stepson had abandoned his dead father’s surname for mine, but as he was older than Elizabeth by less than four weeks, and was so plainly
not
her twin, there was always curiosity concerning them until matters were explained.

It had been a great relief, and the source of much pleasure, to Adela and myself that our two offspring had taken so well to one another and become such good friends. And, in this July of the year 1478, a few months short of their fourth birthdays, they were still as thick as thieves. The dark and fair heads were frequently to be seen close together, hatching mischief. But it seemed to me that the alliance had grown even stronger since the arrival, on the last day of June, of their little half-brother.

There had been a certain amount of interest in him for a day or two, while he was still a novelty, but after that, I was convinced that resentment had begun to set in. I had said as much just now, but Adela had told me that I was imagining things, appealing to Margaret for support. (Margaret Walker was not merely my former mother-in-law, but also Adela’s cousin, Elizabeth’s grandmother, and surrogate grandmother first to Nicholas and now to Adam, who was named after her long-dead husband.) Margaret, who was entertaining Adela and the children at her cottage in Redcliffe for the morning, and who had bidden me call in around ten o’clock for my dinner, had backed up her cousin wholeheartedly. She had pointed to two cherubic and innocent little children, lovingly patting their small brother’s head and making it appear only accidental that they occasionally got their fingers entangled in his hair, making him yell.

I knew that when my womenfolk joined forces against me, there was nothing to do but confess my male ignorance in such matters. I addressed myself to my dinner, but before I had finished eating, Margaret’s neighbour, Nick Brimble, had appeared; and inevitably the conversation – as, sooner or later, it always seemed to do nowadays – came round to the mysterious circumstances of the Duke of Clarence’s execution in February.

The previous summer, after years of being a thorn in his brother’s side, after twice betraying the King and then being restored to favour, after accusing the Queen’s family of witchcraft and raising armed rebellion, George, Duke of Clarence, had suddenly found himself arrested and clapped in the Tower of London by a sovereign and brother whose patience had finally run out. Even then, neither he nor anyone else had really believed that King Edward intended anything more than to give brother George the fright of his life. But in January Clarence had been brought to trial on a charge of high treason and condemned to death. Again, no one had thought that the sentence would be carried out: a reprieve would surely be granted. But in February rumours spread throughout the kingdom that George of Clarence had indeed been executed.

By now, this fact seemed indisputable, but a question mark hung over the manner of his death. The only rumour to escape the walls of the Tower was that he had been drowned in a butt of malmsey wine, a death so bizarre as to provide a topic of endless speculation in every alehouse up and down the land, and which was still being discussed six months later.

After Nick Brimble quit the cottage, Adela began feeding Adam, and it was then that she made the remark that opened this history.

‘What four words, my love?’ I asked with wide-eyed innocence.

‘You know very well what four words,’ she answered tartly. ‘“Butt of malmsey wine.” The subject is becoming tedious, Roger. I know that you feel a personal involvement, but George of Clarence is dead.
How
he died doesn’t matter.’

Margaret ladled more rabbit stew on to my plate, pursing her lips as she did so. I knew what was coming.

‘If I’d realized that you were pregnant, Adela, my girl, I’d never have agreed to look after the children while you and that husband of yours gallivanted off to London. But I blame you most, Roger! You knew she was expecting! Not only did you let her bully you into jaunting around the countryside in the middle of winter, but when you got to London, you tamely allowed yourself to be inveigled into another risky undertaking for the Duke of Gloucester. And to cap it all, you sent her home, all the way to Bristol, with only Jack Nym for company, while you stayed behind to dance attendance on His Grace.’ She pursed her lips in high displeasure. ‘I’ll “His Grace” him if ever I get the chance. I’d like to give Prince Richard a piece of my mind.’

I shuddered at the thought. I had already had a piece of Margaret’s mind; a very long piece that had stretched, on and off, from last February until the present day. I looked in mute appeal at Adela.

My wife gently lifted our son from one breast and put him to the other. (I may say that he was not an edifying sight, slobbering, with milk running down his chin. He reminded me of someone, and I surreptitiously wiped my mouth clean of gravy.) She took a few moments to settle him comfortably, leaving me at the mercy of Margaret’s acid tongue for a while longer, before taking pity on me and changing the subject.

‘Margaret, in less than a fortnight it will be Lammastide. Do you need any help baking your bread?’

It was a generous gesture, knowing as she did that such an offer would divert Margaret’s anger towards herself.

‘And how,’ demanded my former mother-in-law scathingly, ‘do
you
propose helping
me,
with three children to see to and your own bread to bake? It’s much more likely that
I
shall have to give
you
a hand.’

‘I’ve decided Adela will go to Master Overbecks and have him bake our bread this year,’ I said, to my own astonishment, as well as that of my wife.

The idea had only just occurred to me, but I had a little money put by, and could afford the extravagance. As well as having had a fairly lucrative summer so far, hawking my wares around Bristol and the surrounding countryside, I had also received, by royal messenger, a gift of two gold pieces from the Duke of Gloucester for all my efforts on his behalf the previous January. I had said nothing to anyone about this, hiding the money away in the secret place under our cottage floor. Just knowing that the coins were there gave me a sense of security; a bulwark against any bad times that fate might have in store for us. And their possession, as now, gave me the freedom to spring the occasional surprise.

Adela’s astonishment gave way to delight, and she beamed at me, blowing a kiss. Margaret was too dumbfounded to speak for at least half a minute. When she did find her tongue, however, she let it be known that she would rather bake all our Lammas bread herself than permit us to have it made, even by a master baker such as John Overbecks.

‘You’ll have plenty enough of that shop-bought stuff at the feast,’ she scoffed, ‘without eating it at home. Since Master Overbecks was chosen in preference to Jasper Fairbrother to provide the bread sculptures for the main tables, I hear he’s working all the hours God gives him to produce the most elaborate creations the mayor and aldermen have ever seen. Castles, three-decked warships . . . Someone – I think it was Goody Watkins – told me the centrepiece is to be a depiction of the Garden of Eden.’ She sniffed. ‘Let’s hope he can shape a decent fig leaf, that’s all I have to say!’

Adela and I avoided one another’s eyes. I finished my draught of ale and rose to my feet, stretching.

‘It’s very kind of you, mother-in-law,’ I said – I still addressed her in this way because I knew she liked it – ‘but we wouldn’t dream of putting you to so much trouble, would we, Adela, my love? Besides,’ I lied, ‘I’ve already arranged matters with Master Overbecks. And now I must get back to work.’

Adela, sensing a sudden chill in the atmosphere, begged, ‘Wait for me, Roger, if you would. You can walk part of the way home with us. We really must go now, Margaret, my dear. I – er – I promised to call on Mistress Marshall sometime this morning to give her my recipe for mulberry wine. Elizabeth! Nicholas! Pick up your toys and kiss Grandmother goodbye.’