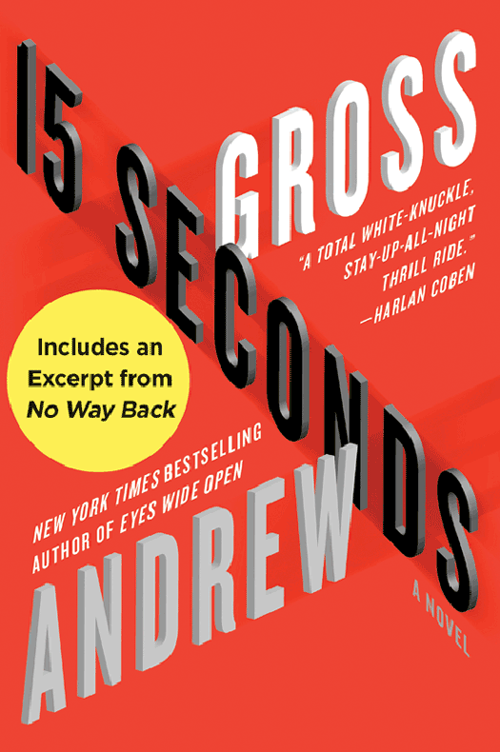 Everyone is guilty of something, or has something to conceal. All one has to do is look hard enough to find what it is.

Excerpt from
No Way Back

I
t had all gotten a little blurry for Amanda, behind the wheel of her beat-up, eight-year-old Mazda:

Her recollection of what she'd been doing only twenty minutes before. Katy Perry's voice on the car radio: “
I kissed a girl .Â .Â .”

She zipped in front of a yellow school bus crawling along ahead of her, the realization beginning to settle in that this wasn't the right way.

Truth was, things had been going downhill quickly from the time she'd woken up this morning. First was her pathetic, out-of-work dad, waking her out of a deep sleepâ“
Why're you always yelling at me, Daddy?
”âthreatening to throw her ass out of the house for good if she didn't change her ways.

Then her boss, who always seemed to be on her case. Sure, she'd missed some time. I mean, washing hair at that stupid salon, like it was some fancy-ass boutique in Milan or France or somewhere. And her tight-ass instructor at the local cosmetology school, Miss Bad Hair Tease of 2001.
At least know how to do it if you're gonna teach the shit, right?
I mean, there had to be some reason the bitch was stuck in a shit bucket like Acropolis, Georgia, right .Â .Â . ?

Not to mention ol' Wayne, her so-called boyfriend. They'd had another one of their famous blowups last night. Amanda was sure he was nailing the checkout girl at Ruby's Market, Brandee or something, with her big rack and all, and that cheesy, fake-gold necklace with her name in large script.

And here she wasâone more missed class away from an F, and late again. That class was the only thing keeping a roof over her head these days. Amanda switched lanes, barely squeezing ahead of a slow-moving SUV with a mom and kid in it.
“C'mon, c'mon,”
she yelled. “I see youâ
okay
?” She turned up the music. She just couldn't handle this kind of shit today.

The only way she could even think straight anymore these days was popping a couple of thirty-milligram Oxys like she'd done when she brushed her teeth. Always did the trick.

Especially with a Xanax chaser.

Katy Perry sang,
“It felt so wrong, it felt so right .Â .Â .”
and Amanda sang with her, dancing with her hands off the wheel.

She heard a loud honk. Like a foghorn in her head. She realized she'd been weaving just a bit.
“All right, all right .Â .Â . Jesus, keep your ass on, bitch.”
Last thing she needed was for the police to be on her butt today. Nineteen years old. With no money. Flunk out and get your ass tossed in jail.

Blinking, Amanda scanned for the turnoff to the school. She knew it was around here somewhere. It was just that everything seemed a little fuzzy about now.

She pulled into the turn lane. Suddenly horns blared at her from all directions.
Okay, okay .Â .Â .
A red pickup swerved, narrowly avoiding her, the driver twisting his head in anger as it zoomed by.

“Asshole .Â .Â .”
Amanda turned to cuss him out. She stared back at the oncoming traffic.
“Holy shit.”

That's when it finally dawned on her that she'd been driving on the wrong side of the road.

Deborah Jean Jenkins's mom ran out of the house, holding her grandson's “didee.” The soft, blue terry cloth that always seemed to make eight-week-old Brett smile as he clung to it with those adorable, tiny little fingers of his.

Not that he was smiling much at all these days. In fact, the poor boy was really colicky or something, and was barely taking his formula. His dad was still two months from coming home from Afghanistan. He hadn't even seen his own son yet. Only on Skype. He had a position waiting for him at the Walmart. Then they could get their own place. Start their lives over again.

“Okay, Mom, thanks .Â .Â .” Deborah Jean said with a loud sigh, going back to pick the didee up from her by the front stairs.

“You want me to come along, honey?” her mother asked.

“No, Mom, I think the two of us can handle this perfectly well ourselves. It's like,
what
âa fifteen-second drive right down the roadÂ .Â .Â . What can happen in fifteen seconds?”

“Well, okay .Â .Â . Just make sure you buckle my grandson in there nice and tight.”

“I promise, Mom,” Deborah Jean said, rolling her eyes with a tolerant smile.

She took Brett back down the walkway to where her minivan was parked. “You're going to be a very important person in this world one day .Â .Â .” she told him. “A doctor or a lawyer, maybe. You'll make us all very proud. And when you
are
”âshe gazed into his bright blue eyesâ“I want you to promise me something. I want you to promise, dude, that if
I
ever go on like that when you're all grown up, you're just gonna tell me to shush up! Can I count on you for that, Brett? Huh, can I?”

Deborah Jean tickled her son's chin with her knuckles as she suddenly heard a rumble from behind her. She turned.

To her horror, a rust-colored car had busted right through the white fence off the street and was heading up the lawn right toward the houseâ
toward her
âseemingly out of control.

“Stop! Stop!”
Deborah Jean shouted as the car careened off the large elm in the yard, barreling down on her.
“Oh, Lord Jesus, no .Â .Â .”

She tried to shield Brett, turning directly into the disoriented eyes of the young woman at the wheel. The last thing she ever heard was the terrified cry of her mom, who never ever stopped worrying, over the oncoming engine's roar:

W
hen Amanda came to, her car was resting among the hedge work of a large, white house.

A shrill voice beyond the car was shrieking,
“Deborah Jean! Deborah!”

Would you stop? You're busting my head, lady
.

Through her haze, Amanda wasn't sure what had happened. The car just seemed to go out of control, like it had a mind of its own. Her door was hanging open. Fuzzily, she pushed herself out of the car. She knew she'd done something really bad. The woman kept screaming, “
Brett! Brett!
Oh my God, someone please help!”

Who the fuck is Brett?
Amanda wondered. Her head was really killing her now.

Suddenly people were everywhere. “Someone cut me off,” Amanda muttered to someone rushing by. No one seemed to be helping her, only the woman who was screaming.

This was like some really bad dream.
It's time to wake up now!
she told herself. But blinking, she knew that whatever was going on, it was really real. Really bad too.

“I couldn't help it,” Amanda said, coming around the car to see.

A woman was pinned under her car. She was kind of pretty. Her eyes were glazed and very wide and her lips moved ever so slightly, though her voice was faint.

That's when Amanda saw that she was clutching something under there. Something bundled in blue. A blanket.

A baby's blanket. And people were standing around with their eyes filling up with tears. And there was blood everywhere.

You've done it now,
Amanda said to herself.

The Living Bible by Inc. Tyndale House Publishers
The Preacher's Bride (Brides of Simpson Creek) by Laurie Kingery
The Warriors of Brin-Hask by Cerberus Jones
Sister Pelagia and the Red Cockerel by Boris Akunin
Down & Dirty by Jake Tapper
Mercenaries 1 Private Skirmish by Anne Kane
Tricksters by Norman MacLean
Alexis the Icing on the Cupcake by Coco Simon
The Border Lord's Bride by Bertrice Small
SCORCHED: A Firefighter Stepbrother Romance Thriller by Graves, Evelyn