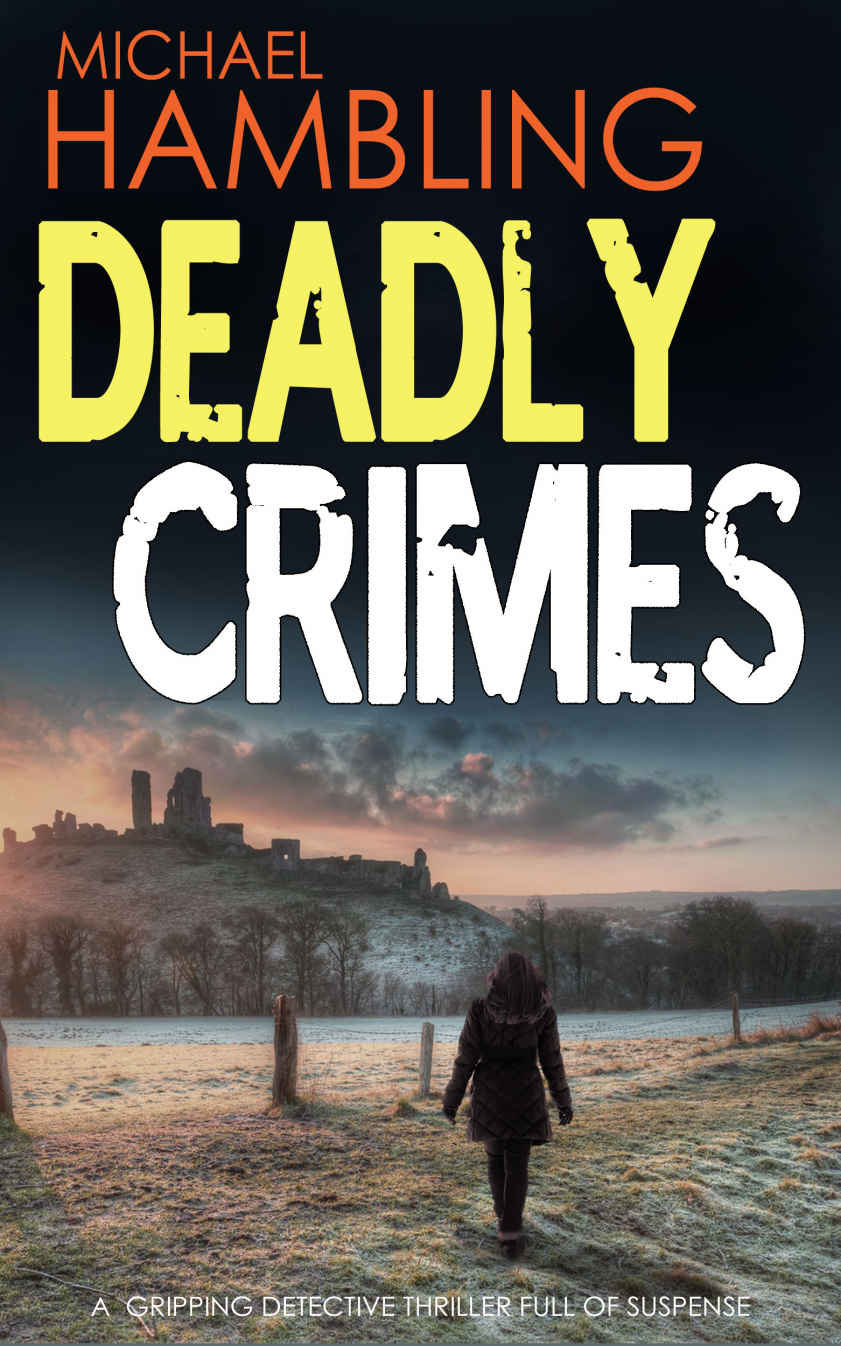 This book is a work of fiction. Names, characters, businesses, organisations, places and events are either the product of the author’s imagination or are used fictitiously. Any resemblance to actual persons, living or dead, events or locales is entirely coincidental. The spelling used is British English except where fidelity to the author’s rendering of accent or dialect supersedes this.

The right of Michael Hambling to be identified as the author of the work has been asserted in accordance with the UK Copyright, Designs and Patents Act 1988.

THERE IS A GLOSSARY OF ENGLISH VOCABULARY IN THE BACK OF THIS BOOK FOR US READERS.

A young woman’s body is discovered on a deserted footpath in a Dorset seaside town late on a cold November night. She has been stabbed through the heart.

It seems like a simple crime for DCI Sophie Allen and her team to solve. But not when the victim’s mother is found strangled the next morning. The case grows more complex as DCI Sophie Allen discovers that the victims had secret histories, involving violence and intimidation. There’s an obvious suspect but Detective Allen isn't convinced. Could someone else be lurking in the shadows, someone savagely violent, looking for a warped revenge?

Gray Mitchell’s body is found buried under fresh snowfall in the early hours of the morning outside Stromford Cathedral. D.I. Jim Neal and D.S. Ava Merry are called in to investigate. It seems that a number of people had motives to kill him, including Mitchell's partner.

Then another shocking act of violence occurs, also connected to the cathedral. Detectives Neal and Merry’s investigation reveals an intricate web of secrets connecting the crimes. But there is something the detectives have missed, the dark secret which can break open the case.

Chapter 6: Bodies in the Field

Chapter 13: The Visit to Gloucester

Chapter 14: Into the Safe House

Chapter 15: The Kitten and the Puppy

Chapter 17: The Body in the Yard

Chapter 19: Need Your Love So Bad

Chapter 20: Visit to a Dying Man

Chapter 24: Death in the Gardens

Chapter 28: Not for the Faint Hearted

This novel would not exist without the help and support of a number of people. It is dedicated firstly, to my wife, Margaret, for being who she is: the most important person in my life, now as always. Secondly to my daughter-in-law, Kat, who is always willing to offer help with grammar and punctuation. Lastly, to my three sons, their wives and my grandchildren.

If you have never visited the Isle of Purbeck on Dorset’s Jurassic Coast then you should really try to do so. The area has beautiful scenery, picturesque beaches and some of the best pubs in the South West of England. The DCI Sophie Allen novels are partly dedicated to this wonderful area.

A few days before Christmas, in the cold, dead hours of the night, the city centre streets were bleak and deserted. The rain was falling in torrents. At least the young man had an umbrella which kept his head and shoulders dry, but his trousers were soaked and water trickled down his legs into his shoes.

He held the umbrella lowered to protect his face from the driving rain. He could hardly see where he was going. He raised it a little and saw the sign for Northgate Street. So he was still heading the right way. He continued on and collided with someone coming towards him. He raised the umbrella again and started to laugh, ready to apologise for his carelessness, but then stopped. The other man’s eyes were jumping with tension, his expression vicious. He glanced sideways, looking for an escape route. He saw a jewellery shop with its door open. A van. Several men dressed in black, balaclavas pulled down over their faces.

The figure in front of him was now holding a small, black, metal object. He looked at the eyes. They held no pity. He looked up at the sky and found nothing there. Instead of a prayer, he whispered a single name: Susan.

The small cruise launch finally came to rest and dropped anchor. It was night and the mist was down over Poole Harbour. A dark figure waited on the rickety jetty that jutted out across the mudflats. A crewman threw a line across and the boat was made secure. The figure stepped carefully onto the slippery deck.

He kept watch on deck as the two crewmen went below. The younger of them returned almost at once. He led a group of six young women, their faces sickly in the dull light. They shuffled forward one by one across the gangway onto the slimy planking of the jetty. They made their way to the shore where a fourth man was waiting beside an old van. The two crewmen peered into the gloom, but nothing stirred.

The last young woman to reach the shore gasped when she saw the figure waiting at the van.

She was bundled into the van with the others. One of the women complained when she was pushed too hard. The man who’d hurried them from the boat grabbed her shoulder, spun her around and punched her hard in the face. Then he shoved her through the doors, where she sprawled face down on the floor, weeping. The elder of the two shore-men took a wad of money out of his pocket and handed it across to the crewmen. They returned to their boat, untied the line and disappeared into the misty darkness. On shore, the van began to make its way westwards, along a boggy track.

Seated beside the driver, Stefan chewed at his finger nails. His own cousin. He’d had no idea she would end up being caught in their elaborate snare. What could be done? He would have to speak to Barbu and then one of the bosses. The thought made him nervous. He knew how cruel they could be. He had seen what they did to some of the young women. He had even been involved himself. But he couldn’t just leave Nadia here with these men.

They pushed the girls in through the farmhouse door and herded them upstairs. Then Stefan went to see Barbu.

‘That girl, the one called Nadia. She is my cousin, Barbu. We must get her out of here,’ he said in Romanian.

Barbu laughed. He spat on the floor.

‘You think we will change the plans just for that? After all the money, and the danger of bringing them across? You are mad. Forget it, Stefan. Put her out of your mind. Just get on with your job. And make some food, quick. We’ve had nothing since we left France.’

Stefan was dismayed. He went into the kitchen and started to prepare a stew out of tinned meat and vegetables. He opened a fresh loaf of bread and set plates and cutlery out on the worktop. He placed a helping of food on each of the eleven dishes and called to Barbu that the meal was ready. Barbu and one of the other men took plates upstairs for the young women.

Some time later, three of the men pushed the girls into the large downstairs room. The young women looked exhausted and panic-stricken. Barbu had poured glasses of fruit juice for them. He added the drug Rohypnol to each glass. Nadia refused to drink. She looked at Stefan, but he would not meet her eye. One of the other men tried to force her to drink, but she spat it out. Barbu stalked across the room and slapped her face, hard. She shrank back away from him. Stefan came forward and pushed Barbu away from his cousin.

‘What are you doing?’ said one of the men in English. ‘Fuck off, you dickhead!’

Barbu pushed Stefan out of the room and closed the door behind him. Stefan stalked down the corridor to the kitchen, where he began to kick the wall in frustration. This was becoming a nightmare. He could hear the girls screaming as the men pushed them back up the stairs. He knew exactly what was going to happen now. He had often taken part himself. What could he do? He sat in the kitchen with his head in his hands and the minutes ticked by. Then the gang leader walked in and Stefan looked up at him. Maybe he would understand.