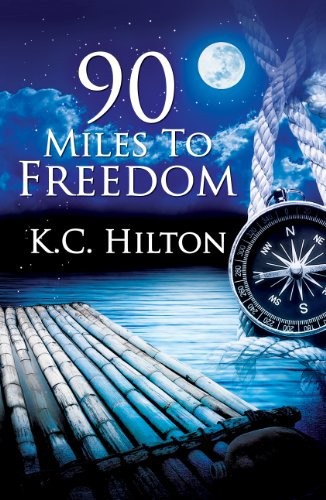 '90 Miles To Freedom' is published by That Right Publishing LLC, who can be contacted at:

The book cover design is by Robin Ludwig Design, Inc.

Collin had the perfect life. He had a loving family and everything money could buy. A life envied by all.

But Collin wasn’t perfect. He had a secret, one that came with a price. A secret that could destroy his life and everyone in it.

“
George!” Betty yelled up the stairs. “We have to go! We’re going to be late! And we still have to buy Joey a graduation card! What on earth are you doing up there?”

George and Betty Scott weren’t old enough to retire, but they didn’t need to work, either. They’d wisely invested in commodities and made a mint when oil prices went through the roof.

They’d always loved the ocean. When they found themselves financially secure with no mortgage, no car payments and nothing else to worry about save living expenses, they decided to sell their old home and move so they could raise their two boys near the water. When their oldest son was still in high school they purchased a home just outside of Key West, Florida in a subdivision called Key Haven.

George and Betty loved Key Haven. They were perfectly happy to live in Key Haven for the rest of their lives. All they wanted was to make their children happy, grow old together, and patiently wait to spoil future grandchildren.

Their two story home sat on a large lot, the back of it facing the Gulf. The house was huge. At thirty-five hundred square feet, it was comprised of three bedrooms, three and a half baths, and a two car garage.

Most women are generally interested in having a large kitchen, and Betty’s was larger than most. However, her favorite feature of the house was that she could walk through the French doors in the living room and step onto the stone-tiled patio. The patio led to the seawall, which was exactly forty feet away from their private boat docks.

Betty loved to sit on her patio for hours at a time, watching the water. The Gulf was so clear that she could see the fish swimming deep within, flitting here and there in their underwater world. Schools of dolphins swimming by in the early mornings or late afternoons were an added bonus that made Betty smile every time.

The backyard patio area was George and Betty’s second home. They found no need to go anywhere for vacations.

“
No need to take a vacation now that we live here. Most people spend loads of money just so they can vacation where we live,” George and Betty often said to their children. “Besides, where on earth could there possibly be a more beautiful place to visit?”

George was more than intrigued by his two car garage. The large area kept him contentedly busy, organizing and storing his handyman tools and miscellaneous items. George, being an efficient man, had labeled all the drawers and cabinets in the garage so he could quickly and easily locate whichever particular tool he might need. He had a full arsenal of the tools a man would need to do odd jobs around the home, and was very proud of them. The labels were also helpful for Betty, because she was often more inclined to use the handle of a screwdriver to hang pictures throughout their home rather than take the time to search for a hammer. She often told George that “if it works, that’s all that matters.”

Most of George and Betty’s time was spent on their partially covered back patio, reading books, playing games on their laptops, and discussing the day’s events. Often they lazed in their in-ground swimming pool or in the attached Jacuzzi, following up with a delicious meal which George cooked on their gas grill. Evening sunsets offered the most glorious setting, more fascinating than any movie. The ocean not only offered endless hours of mesmerizing views, but also provided tranquil sounds that soothed their already contented souls.

George was a tall man, just over six feet tall, and had a slender but muscular build. He wore his straight brown hair in a shaggy style and sported what he considered to be a very stylish goatee. He always made mention to anyone who would listen that if he didn’t have facial hair he would look twenty years younger.

The top of Betty’s head almost reached George’s shoulder, since she stood only a couple of inches over five feet. When George told people about his facial hair making him look older, she was always pleased to chip in that if she were only seventy five pounds lighter she would also look twenty years younger. And Betty never minded when George teased her about being short. She simply responded by telling him she wasn’t short at all. Technically, she was vertically challenged. She also told him she wasn’t overweight; she had thick skin.

The couple was immensely proud of their two sons, Collin and Joey.

Collin, their oldest, was twenty-four. He was half a foot shorter than his father, with a stocky build that showed a bit of muscle. His hair was brown, like that of both his parents. He wore it in a fade style cut, keeping a little extra hair on top and using hair gel for the wet, messy look. Collin also wore a well-groomed goatee. On his left ear he sported a small gold ball earring.

When he’d graduated from high school, Collin told his parents he had decided not to attend college. Instead, he wanted to own his own business. Rather than his parents paying for his college tuition, he asked if they could save money and purchase him a seaworthy fishing boat. He astutely pointed out that owning a ship like that would ensure he always had work, a place to sleep and, of course, an abundance of seafood, so he would never go hungry. Collin had worked on various fishing boats throughout high school, learning as much as he could. Betty and George were well aware that he had always dreamed of owning one of his own.

So now Collin was the owner of a large fishing boat, in which he lived and worked, making a great living by charging vacationing tourists for fishing excursions.

On the morning of Joey’s graduation, Collin felt somewhat sluggish. He had not slept all night, explaining to his parents that the fishing tourists had paid him double the night before so that he would take them fishing during the night hours. The tourists claimed that fishing at night during a full moon would allow them to catch the best of fish.

Collin had planned on taking a short nap before graduation to ensure he’d be able to keep his eyes open during Joey’s ceremony, as well as at the planned celebration dinner afterwards. He knew his parents had made reservations at their favorite restaurant. Collin also wanted to be wide enough awake to meet up with his fiancée, Morgan, after dinner.

But for now the focus was on Joey’s high school graduation. Betty paced around the front entrance of their house, impatient to get moving. Collin stood on the side, watching her and smiling.

“
Lord help me! That wretched man! He will be the death of me yet! How ironic that the general consensus is that women take too much time getting ready. Well apparently,” Betty shouted through the door, aiming her voice in the direction of their bedroom, “the general consensus hasn’t met my husband!”

“
Mom, it’ll be fine,” Collin assured her. “You know how Dad gets on special occasions.”

She ignored her son, choosing instead to encourage her husband with a little more yelling. “George! Why is it that I’m always waiting for you to get ready? Isn’t it supposed to be the other way around?”

“
I’m coming, I’m coming,” puffed George, sounding out of breath. He hurried through the hall holding two pairs of shoes. His tie hung undone around his neck. “What do you think: black or brown?”

“
Either pair will do just fine,” Betty snapped. She bit her lower lip, trying to hold back her anger. “It’s not like anyone will notice the color of your shoes anyway!”

George gave his son a bewildered look, then shrugged and rushed back to their bedroom. They could hear him dropping the shoes onto the floor.

“
You’re worse than a girl going on her first date!” Betty shouted, then looked over at Collin. She shook her head and chuckled under her breath. “God help us.”

Collin laughed, always entertained by his parents’ strange little ways. Their good-hearted sarcasm could be very funny, and they seemed to get great joy out of picking at each other most every day. It wouldn’t be the least bit out of the ordinary to hear either of them say, “I’m going to kick your ass,” then start laughing and peck the other one on the lips.

George came shuffling out of their bedroom in his black shoes, mumbling while he tried to fix his tie. “I just want everything to be perfect. Our little boy is graduating from high school and will be off to college after the summer.” The tie appeared to be fighting back, so Betty stepped over to give him a hand. “Our little boy, Betty! He’s turning into a man so fast. He’s just barely out of diapers! Well …” he said, pausing and tilting his head to the side. “Maybe not diapers. Maybe that’s pushing it. But how can it be that we’re already headed to his high school graduation? When did he grow up so fast?”

Betty smiled and kept quiet, letting George go on and on, thinking out loud.

Suddenly George’s eyes lit up like a kid’s on Christmas morning. He grinned from ear to ear. “Maybe Joey can buy a boat after Collin sells the yacht. Then he could use the other side of the dock. Now that’s a great idea!”

Joey was eighteen and stood six feet tall, like his father. He had a slender build and enjoyed teasing his older brother about being short. Of course teasing in this family was always done with affection, so Collin was never upset when Joey went after him.

Height wasn’t the only difference between the brothers. Joey was graduating from high school at the top of his class and had completely different plans from what Collin had after graduating.