Read A Book Of Tongues Online

A Book Of Tongues 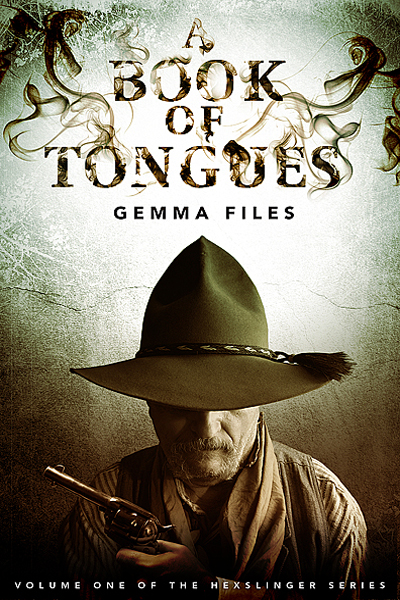 GEMMA FILES
VOLUME ONE OF THE HEXSLINGER SERIES

A BOOK OF TONGUES

This book is a work of fiction. Names, characters, places, and incidents are either
a product of the author’s imagination or are used fictitiously. Any resemblances to
actual events, locales, or persons, living or dead, is entirely coincidental.

Copyedited and proofread by Helen Marshall

Converted to mobipocket and epub by Christine http://finding-free-ebooks.blogspot.com/

Table Of Contents
For Callum, who can’t read it yet
(and probably shouldn’t, when he can).
But also for Steve, without whose support
nothing would be possible,
and Elva Mai Hoover and Gary Files,
without whom I would not exist.

Here is a book of tongues.

Beware! I now know a language so beautiful and lethal

My mouth bleeds when I speak it.

I’ll be true to my love

If my love will be true to me.

Today is ruled by Centeotl, the Lord of Maize, a version of Xipe
Totec, Our Lord the Flayed One. Also known as Xilonen, “the Hairy
One,” he holds the position of fourth Lord of the Night.

The Aztec
trecena
(or thirteen-day month) Tecpatl, “Stone Knife,”
is ruled by Mictlantecuhtli, Lord of Mictlan. This
trecena
signifies an
ordeal or trial that pushes one to the very threshold of endurance. It
forebodes an abrupt change in the continuity of things.

By the Mayan Long Count calendar, the protector of day Itzcuintli
(“Dog”) is also Mictlantecuhtli, who rules that day’s shadow soul.
Itzcuintli is the guide for the dead, the spirit world’s link with the
living. It is a good day for being trustworthy, a bad day for trusting
others.

These are good days to shed old skins; bad days to cling to what
is already known.

The dream was always the same.

She appeared above him, blown by a black wind, her back-sloping
forehead girded with a hissing serpent, her swirling hair stiffened
with mud. Her round face was set with jade scales, irregular as leaves.
The lids and orbits of her wide-spaced eyes were decorated, mosaic-style, with tiny chips of shell, mother-of-pearl and obsidian. Her
breasts were bare, high-set, the nipples pale and small — a virgin’s,
or even a child’s. Sometimes he thought this meant she must have
died young. Other times, however, he looked deep into her painted
gaze and knew that it meant she might very well never have actually
lived
at all.

Little king
, she called him every time,
little hanged man — you
who are mine by right, as well as by choice
. And he saw a great
darkness rise up around her, spreading wide: a hissing cloud of
dragonflies whose wings dazzled, every colour in the world at once.
Like a rainbow.

Water rose around his feet, burning cold, lapping at his ankles.
The sky shone yellow and black. Knives fell like rain.

To either side, grey stone walls retreated into shadow, studded
with what seemed at first glance to be rough, irregular stones — but
a closer look revealed that the stones were grinning, all leering teeth
and empty nose-holes. An endless rack of skulls from whose orifices
flowers bloomed at random, luscious pinky-red as heart-meat.

Around her long neck a rope dangled, twisted from corn-silk
and stuck all over with thorns. She held it up, looped around both
thumbs — spread it wide, a cat’s cradle, a pair of opening jaws.

Use this
, she told him.
Use it, while you still can. Kill what you
love, choose your ixiptla, make your necessary sacrifices. Pierce
your tongue, run it through the hole, and pray words of blood.

The time of earthquakes is at hand, little king.

The time of great floods, when the upper crust cracks, and
the Sunken Ball-Court overflows.

The Gods return, at long last. What we have been promised,
we will have. So feed us once more, and apologize, before it is
too late.

He didn’t know what she meant, by any of it — never had, and
never expected to. But then again, maybe it wasn’t even his dream
to begin with.

Twenty days later, though, there he was again — right smack back
in the same place, slogging through black river water to his knees
under the jaundice-yellow sky. Skulls to the left of him, flowers to
the right, the very air itself an obsidian storm through which knives
swirled by, drawing blood ’til it felt like all he had left for skin was a
single walking wound. And as he struggled grimly forward, the only
thing he could think was this — over, and over, and over —

. . . that Goddamned son of a bitch, he went and left me behind.

For all it was just gone noon by the barkeep’s (carefully hidden)
watch, the Bird-in-Hand dance-groggery was nevertheless crammed
full with people either drunk from the night before, or continually
drunk for the last few days, and counting. One of these, a huge fool
in miner’s clothes, had spent the last ten minutes staring fixedly at
Chess Pargeter, who stood sipping a shot of absinthe at the bar — a
slim and neat-made man dressed in purple, head barely level with
the miner’s breastbone, whose narrow red brows shaded to gold over
a pair of eyes the same green as the wormwood and sugar concoction
he held.

“Queer,” the miner said to the bar at large. “You can tell by the
clothes.”

“I really wouldn’t, mister,” replied another man — almost as tall,
and armed with a double-barrelled eight-gauge — who’d passed a
similar length of time with his chair tipped back against the wall,
shapeless hat pulled down to shade his eyes in such a way that the
company had hitherto mainly supposed him asleep.

The miner squinted at him. “Think I want your opinion, asswipe?”

With a sigh: “Think you
need
it, for sure. Entirely your own
business whether you choose to believe me.”

Chess took another sip, ignoring them both. His hair, twice as
red as his brows, was close-cut enough to reveal he’d had one of his
lobes pierced so that he could hang a lady’s ear-bob from it: a modest
gewgaw shaped like a Hospitaller cross, chased in gold wire and set
with Navajo turquoise. It caught the light as he swallowed, making
the miner snort.

“‘I wouldn’t,’” the miner repeated, low and sneering. Then called,
in Chess’s direction: “Hey, gingerbeer — didn’t your Ma work the
Bella Union, back when? I mean,
way
back.”

“My Ma’s none of your concern, tin-pan.”

Chess shrugged. “Oh, she’s that,” he allowed. “Just don’t see what
it has to do with you.”

The miner stared at him a moment, then blustered on. “Well . . .
think I mighta paid for her, a time or two — she had that same red
hair, and all.” He pointed at the ear-bob: “Nice jewellery. Reverend
Rook give it to ya?”

“This?” Chess shook his head, making the gem sparkle. “Nope.
This, I bought for myself.”

“How come? Everybody knows you’re his bitch.”

There was a general mutter, bringing the man by the door to
his feet in one mighty heave. “Aw, here we go,” he announced, both
barrels up and trigger cocking.

The miner spat out maybe half a word — the phrase he had in
mind might have eventually proved to be
damn faggot outlaw
, had it
been allowed to come anywhere near full expression — before Chess
shot him neatly through the head without even seeming to draw, let
alone to turn.

Chess licked the last of the absinthe from his glass’s rim,
upturned it, and threw the barkeep money. “That’s for my tab,” he
told him. “And more sawdust.”

“We get that stuff for free, Mister Pargeter,” the barkeep
managed.

“Then use it to paint the wall again instead,” Chess snapped
back, and left. The tall man tipped his hat to the company at large,
put up his gun, and followed.

“Some pretty rough work, ’specially on a Sunday,” the tall man —
whose name was Edward Morrow — remarked, as they stepped out
into the muddy street.

“Son-of-a-bitch never even had a chance, let alone a fair one —
that’s how so.”

Chess snorted. “Hell, Morrow, I was just standing there, drinking
my drink.
He
was the one convinced he had to say something
about — it, or me. . . .”

“Me and Rook, then, or what-the-Christ ever. Came at me asking
for trouble, and he got what he asked for. I mean, I wasn’t ’bout to
start a damn fist-fight with him — you see the size of that idjit?”

“Looked ’bout
my
size, from where I was sittin’.”

A few steps on, they paused at the corner where Pacific Street met
Moketown alley, under one of the many wash-lines of flapping coats
and shifts — half-jokingly referred to by sailors on shore leave as
“flags of Jerusalem” — which marked yet another of San Francisco’s
multitudinous Poor John clothing shops. Chess drew a watch of
his own from the inner pocket of his purple brocade waistcoat, and
flipped it open.