Read A Bride in the Bargain Online

A Bride in the Bargain 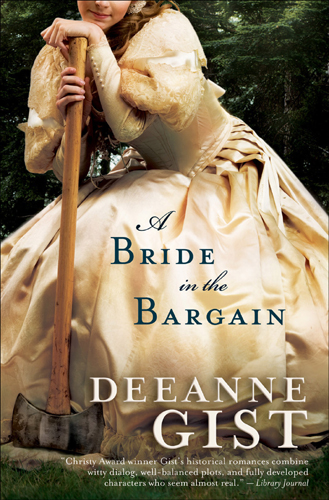 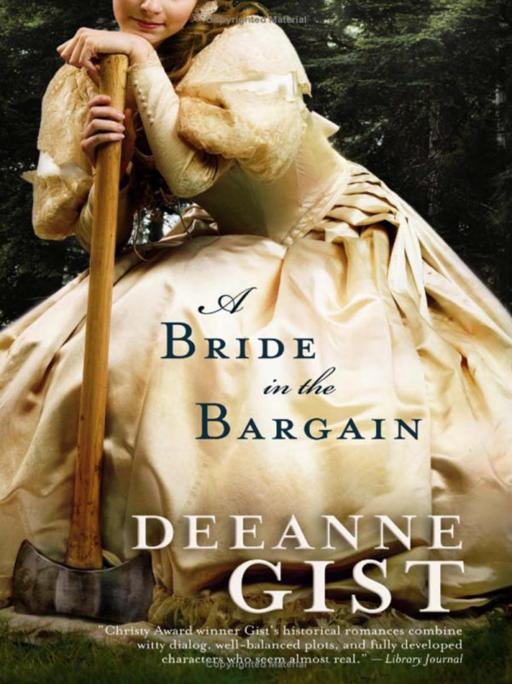 A Bride Most Begrudging

The Measure of a Lady

Deep in the Heart of Trouble

A Bride in the Bargain

A Bride in the Bargain
Copyright © 2009
Deeanne Gist

All rights reserved. No part of this publication may be reproduced, stored in a retrieval
system, or transmitted in any form or by any means—electronic, mechanical, photocopying,
recording, or otherwise—without the prior written permission of the publisher.
The only exception is brief quotations in printed reviews.

That’s my daughter on the front cover!

So, sweet pea, this one’s for you!

DEEANNE GIST has a background in education and journalism. Her credits include
People, Parents, Parenting, Family Fun
, and the
Houston Chronicle
. She has a line of parenting products called I Did It!
Productions and a degree from Texas A&M. She and her husband have four children in college. They live in Houston, Texas, and Deeanne loves to hear from her readers at her Web site,
www.IWantHerBook.com
.

I don’t know what I would have done without my sister, Gayle Evers, and my critique partner, Meg Moseley. When I was in a crunch, both went above and beyond the call of duty. They gave abundantly of their time, their expertise, and their wisdom. Thank you seems so paltry for all that they did, but here it is anyway: Thank you, girls, so, so much!

I wanted to give a very special thanks to Ted and Marietta Terry, who welcomed me into their home while I did my research in Seattle. They have such an incredible gift of hospitality and have carved out a very special place in my heart. I love you both.

Jim and Ruth Darling graciously allowed me to use their beautiful lake house as a getaway those last few critical weeks before deadline. I have never been so productive in my life. Thank you so much!

So many folks in Seattle bent over backward when I asked for help with my research—the Pioneer Square Community Association, the Pioneer Association of Washington, the Washington State Library, the University of Washington Library, the MOHAI (Museum of History and Industry) Historical Society, and so many, many more. Thank you so much for your patience and assistance.

ATTENTION BACHELORS! Due to the efforts of Asa Mercer, you can now secure a bride of good moral character and reputation from the Atlantic States for the sum of $300. All eligible and sincerely desirous bachelors assemble in Delim & Shorey’s building on Wednesday evening.

Joe Denton scoffed at the ad and scanned the rest of the page. The lopsided ratio of men to women once again filled the columns of the
Seattle Intelligencer
.

Glancing at the mantel clock, he shifted on the maroon-and-gold sofa, then read the next page. The troops at Hatchers Run now had a series of signal towers along their entire line and almost every movement of the rebels could be observed. If Lee were to fall back in an effort to overwhelm Sherman, he would find Grant thundering close upon his rear.

The door to the parlor opened and the head of a small, brown-haired boy poked around its edge. “I thought that was you I saw coming up the walk. You here to see my pa?”

Sprout Rountree stepped inside and hitched up his short pants, revealing scuffed knees. His stiff white shirt was untucked, grass-stained, and torn at the elbow.

“Looks like you’ve had a hard morning,” Joe said.

Sprout puffed out his chest. “I’ve been practicing to be a lumberjack, just like you.”

A grin split his freckled face. “I have. I chopped down Mama’s tree out back all by myself.”

Joe hesitated. “That sapling, you mean? The Chinese pistachio your mother ordered from the Sandwich Islands?”

He darted out of the room and returned in another minute holding what was left of his mother’s pride and joy.

Joe swiped a hand across his mouth. “When did you do that, son?”

“This morning. I used my pa’s ax. It sure is heavy. But I got big muscles for a boy my age. Ever’body says so.”

Without waiting for an answer he strode right up between Joe’s knees and flexed his little arm. It wasn’t much thicker than the sapling he held, but Joe assumed a serious air and scrutinized the boy’s arm, squeezed his muscle, then whistled. “Very impressive.”

The boy beamed. “Lemme see yours.”

“I can’t roll up my sleeve right now. I’m waiting to see your pa.”

“Could you let me squeeze it, then? You wouldn’t have to roll up your sleeves for that.”

Joe glanced at the slightly cracked door, then flexed, making his arm bulge.

Sprout’s hand couldn’t begin to encompass the muscle, but he squeezed what he could, his eyes huge. “Mine are gonna be just like that someday.”

Ruffling the boy’s hair, Joe chuckled. “I imagine they will. Until then, though, you might not want to chop down any more of your mama’s trees. They aren’t ready for the lumberyard just yet, and I’m not sure how she’d feel about you handling an ax.”

“Then how am I gonna learn lumberjacking?”

“Well, maybe your parents will let you come out to my place sometime and help me.”