Read A bucket of ashes Online

A bucket of ashes 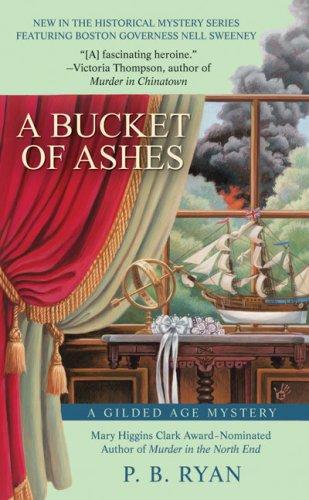 “As always, the author excels at setting the scene, evoking the time and place by use of the day-to-day details as well as historical events. The resolution of the central mystery is almost secondary to the revelations about Nell’s past and the way the author ties up all the loose ends of her present situation. Longtime readers will enjoy this aspect immensely; I know I did. This has been a gorgeously written series, populated with unique and unforgettable characters.” —
CA Reviews

A BUCKET OF ASHES

Copyright © 2006 Patricia Ryan. All rights reserved. With the exception of quotes used in reviews, this book may not be reproduced or used in whole or in part by any means existing without written permission from the author.

Originally published by Berkley Prime Crime, a division of Penguin Group (USA) Inc., as Book #6 of The Gilded Age Mysteries

For Nick Dichario, Mike Fleming, Rigel Klingman, Alan Michaels, Karen Van Meenen, Ben Schaefer, Dan Plumeau, and all the other, less regular Wednesday Night Irregulars, who help to recharge my batteries in the middle of the week. And, of course, for Suzy, our Hostess With the Mostest.

I speak of new cities and new people.

I tell you the past is a bucket of ashes.

I tell you yesterday is a wind gone down,

a sun dropped in the west.

I tell you there is nothing in the world

only an ocean of to-morrows,

a sky of to-morrows.

“Miseeny, who’s that man?” asked breathless little Gracie Hewitt as she treaded water in Waquoit Bay flanked by the two young women charged with her care.

“What man, buttercup?” Nell Sweeney, standing waist-deep in the placid water, followed Gracie’s gaze toward the Hewitts’ colossal, cedar-shingled summer “cottage.” Shielding her eyes against the late afternoon sun, she saw a man walking toward them across the vast stretch of lawn that separated the shore from the house. Lean and with a graceful gait, he wore a well-tailored cutaway sack coat and bowler. It wasn’t until he removed the bowler and smiled at Nell—that warm, genial smile she’d once known so well—that she recognized him.

“Who is he, then?” asked Eileen Tierney in her softly girlish brogue.

“He’s, um, someone I used to know when I lived here on the Cape. I haven’t seen him for some time.”

It had been three years since Nell, who lived in Boston with the Hewitts except for summers here at Falconwood, had last crossed paths with Dr. Cyril Greaves. In July of ‘sixty-seven, she had accompanied her employer, Viola Hewitt, to a charity tea in Falmouth, and he’d been there. Their conversation had been cordial—affectionate, even—but as if by unspoken agreement, neither had made any move to resume their acquaintance. Two summers before that, they’d passed each other on Short Street in Falmouth, he in his all-weather physician’s coupé and Nell in her little Boston chaise, and had chatted for a minute until a salt wagon rumbling up behind Dr. Greaves had forced him to move on.

For him to actually seek her out this way was unusual enough to be disconcerting.

The first time Nell had seen Dr. Greaves, she was struck by his resemblance to a statue of St. Francis of Assisi in front of St. Catherine’s, her parish church. Born with patrician good looks, expressive eyes, and that ready smile, he was further blessed by being one of those lucky men who didn’t seem to age much in their middle years. His light brown hair had but a whisper of gray at the temples, and he still moved like a man in his twenties.

“Is he nice?” Gracie panted, switching to a dog paddle to keep up with Nell as she waded toward shore.

“
May
I?” asked the child with a put-upon roll of the eyes.

“You
have
met him. You just don’t remember.”

Nell paused at the edge of the bay to wring out the sodden, knee-length skirt of her bathing costume as Dr. Greaves crossed the sandy stretch of beach. She looked up to find him taking in her attire—the puffy cap, black wool sailor dress, matching pantaloons, and lace-up slippers—with a contemplative smile that made her cheeks bloom with heat.

“Oh, do stop gaping at me,” she said through a flutter of embarrassed laughter.

“Is that any way to greet an old friend?”

Old friend.
Curious, Nell thought, that Dr. Greaves should refer to himself that way. Much as they’d cared for each other, they’d never been
friends
, precisely; certainly she’d never thought of them as such.

“And I wasn’t gaping,” he said. “I was admiring.” Before Nell could summon a reply to that, he turned to greet Gracie and Eileen with a bow. “Ladies. So sorry to intrude upon you unannounced like this, but the butler told me you were out here, and that I should just come on back.”

“Quite right,” Nell said. “Grace Hewitt, Eileen Tierney, may I present Dr. Cyril Greaves, a physician from East Falmouth.” To Dr. Greaves, she said, “Miss Tierney helps me to look after Gracie, with whom you are already acquainted.”

“And I you,” said Gracie, the consummate little Brahmin lady in her short white bathing dress and damp braids.

The child’s decorous reply drew an impressed grin from Dr. Greaves. “I must say, that is a much more mannerly salutation than the red-faced squalls with which you greeted me the first time we met.”

“Dr. Greaves is the physician who took you out of your mommy’s tummy,” Nell told Gracie.

“With Miss Sweeney’s help,” he said. “I couldn’t have done it without her.” A gracious statement, indeed, for it was he and he alone who had saved both Gracie’s life and that of her mother, a chambermaid named Annie McIntyre, by means of a deft and timely Cesarean section that storm-ravaged night six years ago. Meeting Nell’s gaze, he said, “I should never have let her go.”

Looking up at Nell, eyes wide, Gracie said, “You were there when I was born?”

She hesitated. Dr. Greaves winced, evidently realizing he’d just revealed something that Nell, in an effort to forestall Gracie’s incessant questions about her parentage, had kept to herself. With the cat out of the bag, Nell nodded and said, “I was Dr. Greaves’s assistant for four years. Then, after you arrived and Nana decided to adopt you, she asked me if I would come to Boston to be your nursery governess.”

But not before questioning Dr. Greaves, in a conversation overheard by Nell, as to her suitability to care for and tutor a young girl.
She’s of good character and chaste habits, I take it?
His response had been reassuring, if purposefully vague. There’d been no hint—thank God, because Nell had desperately wanted the position—of her disreputable past, nor of the fact that she’d been sharing the lonely doctor’s bed for three of the four years in which she’d lived under his roof.

From a good family, is she?
Mrs. Hewitt had asked him.

They were from the old country, ma’am. Both gone now, first him and then the mother, when Nell was just a child.

And there’s no other family?

She had a number of younger siblings—that’s how she learned to care for children. Disease took most of them—cholera, diphtheria—but one brother lived to adulthood. She assumes he’s still alive, but it’s been years since she’s seen him. James—she calls him Jamie.

Nell had let out the breath she’d been holding, weak with relief and gratitude that he hadn’t mentioned Duncan. The rest of it was damning enough, but if Viola had known about Duncan, there would have been no question of hiring her.

Naturally,
Viola had told Nell when she offered her the position,
I would prefer that you remain unwed while Grace is young, in order to devote your full attention to her. And, of course, your conduct and reputation must be above reproach—you’re responsible for the upbringing of a young girl, after all. But I can’t think you’d let me down in that regard.

If Nell had managed, these past six years, to live up to Viola’s expectations, it was only by perpetuating a lie of omission to a woman she’d come to regard as a surrogate mother. As far as Viola knew—then and now—Miss Nell Sweeney was a virtuous Irish Catholic girl from a working class background who was good with children. There’d been so much Nell had been obliged to keep hidden all these years, lest she risk the loss of her position, her wonderful new life, and most unthinkable of all, Gracie.

“Miseeny?” Gracie was tugging at her skirt. “
Did
you?”

“Know my mommy? My weal mommy?
Real,
” she added, correcting herself before Nell could.

“I had never met her before that night,” Nell answered truthfully.

Nell said, “Gracie, you know what Nana says. She’ll tell you about your mommy as a birthday present when you turn twelve.”

Although the child was equally curious about her father, there had been, at his insistence, no such promise to reveal his identity. Recently Gracie had overheard Mrs. Mott, the housekeeper, say that she’d been “sired by a Hewitt,” and had pressed Nell as to what that meant. In response, Nell had uttered the only outright lie she’d ever told the child: “‘Sired’ means adopted. Mrs. Mott was talking about Nana’s having picked you out special because she’d always wanted a little girl.”

Eileen, adept at changing the subject when it veered down this particular path, said to Dr. Greaves, “You’d be the one, then, that taught Miss Sweeney nursing.”

“More than just nursing,” Nell said. “He taught me arithmetic, French, history, music, comportment... I didn’t even know how to write a proper letter till Dr. Greaves got hold of me.” He’d been her Pygmalion, she his grateful Galatea.

“Nell had an extraordinarily quick mind,” Dr. Greaves told Eileen. Eyeing the delicate, flaxen-haired nineteen-year-old with keen interest, he said, “Forgive me, Miss Tierney, but have we met?”

“I don’t figger we could of, sir. I only been in this country two years, and I never set foot on the Cape till this summer.”

“You look familiar, but perhaps I’m just confusing you with someone else.” Dr. Greaves turned to Nell. “I, er, wonder if I might have a word with you.” He glanced at Gracie and Eileen. “Perhaps we could take a walk?”

“You go ahead, Miss Sweeney,” said Eileen. “I’ll take Gracie back to the house and get her washed up and fed.”

Nell and Dr. Greaves strolled in silence along the beach toward a handsome edifice adjacent the Hewitts’ private dock, built half on land and half on stone pilings in the water. Like the estate’s main house, it was cedar-shingled, with slate-roofed gables, a turret, and a veranda overlooking the bay, from which stairs descended to the dock. The ground level, which was open to the bay and fitted out with two boat slips, housed a small sailboat, a rowboat, a canoe, and a pair of sleek shells. Above that was a guest suite.