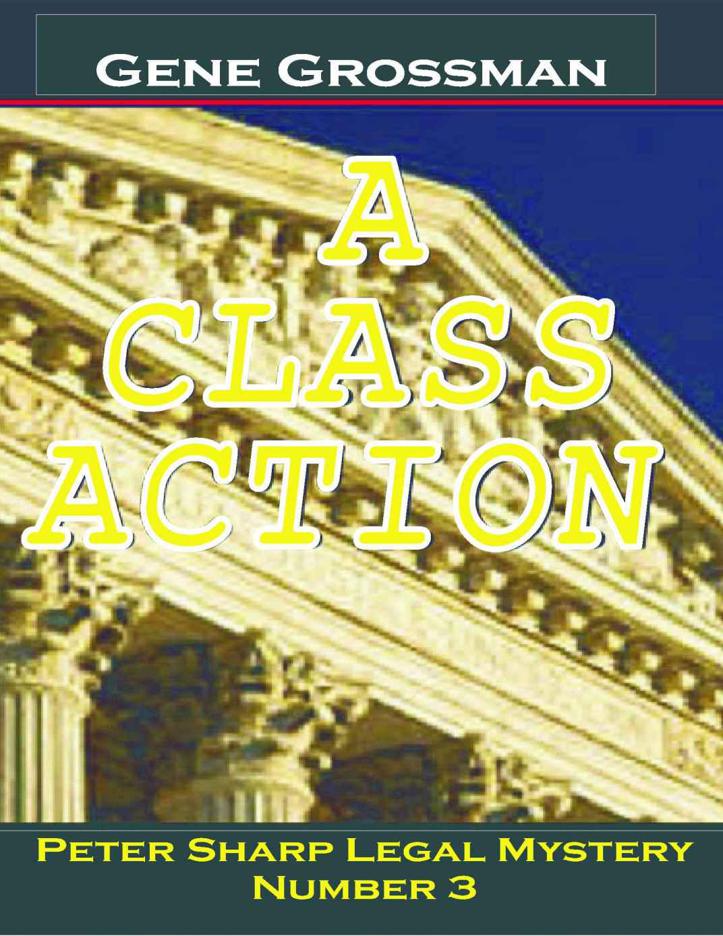 This is a work of fiction. Any resemblance to actual persons, living or dead is entirely coincidental.

This book, or parts thereof, may not be reproduced in any form, stored in a retrieval system, or transmitted by any means, electronic, mechanical, by photocopying, recording, or otherwise, without written permission from the publisher, Magic Lamp Press, P.O. Box 9547, Marina del Rey, CA 90295.

By Reason of Sanity

An Element of Peril

How to Rob a Bank

If you search the world over, I don’t think you’ll find any guy who will admit to being a bad driver. That’s what makes me so unique. The general consensus of my neighbors here in Marina del Rey is that I am one of the worst drivers in the world, and to be honest, I really can’t argue with them.

This is partly due to the fact that I have very shallow depth perception, which means I can’t judge distances very well. It’s also partly because I’ve grown accustomed to driving my old, small Mazda 626 - but now I’m driving a big Yellow Hummer. This is a big change for me and I’m having a really tough time getting used to it. This difficulty got pointed out to me one day last month when I drove little Suzi to turn in her quarterly home-schooling exams. I’m her legal guardian since her stepfather passed away, and she gave me a hint about my driving by sitting in the Hummer’s back seat, strapping herself in, and putting on an adult-sized football helmet. As an adorable Chinese girl who doesn’t speak that much to me, she’s been known to express her feelings in more graphic ways.

During my former marriage to the county’s newly elected District Attorney, we also had a nice luxury car that was used for going out in the evening. She always drove. In some ways, I miss my old Mazda… and my ex-driver.

Due to the miraculous improvement in my income from the practice of law, I now have the real car of my dreams, but there’s always some schmuck with a clipboard walking around, and one of them – one of my underground garage neighbors, complained to the Marina office about my driving skills. As a result, I now also rent the other two parking spaces on both sides of mine, so that nearby vehicles might be less likely to get banged by my yellow tank.

Having three parking spaces under the building is good and bad. It’s bad because I have to pay extra for the other two spaces, but it’s good because now there are fewer cars that can park between my spaces and the four reserved for George Clooney’s limo. I’ve been told that his multi-million dollar megayacht is on the end-tie of our dock, and maybe now I’ll have a better chance to bump into him and get friendly. After all, we are boat neighbors.

On the way back from turning in her test results, Suzi tells me she wants to make a stop on Pico Boulevard at a hobby shop just west of the Rancho Park Golf Course, so I park in front of the place while she goes in and purchases a two-foot-long, remote-controlled motor yacht. I’ve already learned not to ask questions about anything she does, because as the managing partner of her late step-father’s law firm, technically, she’s my boss.

Her stepfather was an old classmate of mine from law school, and after my suspension and subsequent divorce, he helped get me a slip near his houseboat for an old wooden Chris Craft that I was restoring and illegally living aboard. After he was killed in a plane crash and I was reinstated to practice again, I took his place in the law firm and then discovered that little Suzi was really the brains behind the whole operation. Not only is she a computer genius, she’s also the star of a Chinese Restaurant around the corner where her late mother used to work. Most of the cops in our neighborhood eat lunch there every day and they’ve adopted her as their mascot, so we have no problem getting police reports and other little favors that most other law firms would kill for.

While Suzi practices driving her new mini motor yacht, the UPS man delivers a package for her. She must have ordered some instructional videos to help her master the art of boat handling because the package is from BOATINGDVD.COM. It isn’t until several days later while talking to some of our dock neighbors that I learn what motivated Suzi to start her maritime education efforts. Our anchorage is getting concerned with legal liability for damages caused by inexperienced people driving their boats. Unlike automobiles, there’s no age or experience required to drive a boat… and these big floating trucks don’t have brakes.

It’s hard to stop that industrial executive from getting behind the wheel of his yacht on Sunday and taking it for a spin, even though he hasn’t had more than two hours of instruction given to him by the guy who sold him the boat, and told him “it’s easier than driving a car.”

People don’t realize that a fifty-foot boat like ours, weighing almost forty tons, has a lot of force behind it, even at only two or three miles per hour. When it bumps into another half-million dollar boat, the damages cost a lot more to repair than Emilio charges at the local body shop. You can’t just slap on some bondo and send one of these yachts to Earl Scheib for a paint job.

The new Marina rules require each boat to have a valid policy of liability insurance in place, and the owner must take the Coast Guard Auxiliary’s boating safety course and pass their test. In addition to these requirements, our anchorage demands that the dockmaster watch every boat’s owner pull in and out of the slip, to judge their boat handling abilities.

I guess that because my non-existent boat-driving ability has caused a vacuum of respect, the job of satisfying the new Marina boat owners’ requirements has been taken over by the kid. I don’t want to be around to see her try to get this huge boat in and out of the slip. I know that I certainly can’t do it. I think I’ll concentrate on developing my driving skills on land before trying to drive our fifty-foot Grand Banks trawler yacht. In contrast, my driving experience doesn’t look too bad when compared with what happened to a soccer mom today.

Tonight’s local news has a story about a big GMC Suburban that blew up. Fortunately there were no serious injuries. The owner picked it up at the dealership after some routine service was performed, and drove it all around town, until there was a loud ‘bang,’ the engine died, and the hood flew off. No foul play is suspected, but there’s surely going to be some lawyer getting involved in this… it’s too strange an event to be ignored by our bottom-feeding legal community – the shysters at law.

My evening television news viewing is interrupted by a call from Vinnie Norman, a former client and present associate of my good friend Stuart Schwarzman, who is the most entrepreneurial guy I know. After getting rich off of the publicity he got from being sued for ‘negligent nymphomania’ when a user of a weight loss product he sells claimed to have been turned into a nymphomaniac, he went on to start several other businesses. His most profitable is the one that accepts assignments of small court claims from people who have received unsolicited ‘junk’ faxes. Stuart uses a recently enacted Federal Law call the TCPA, to sue those senders for five hundred dollars on each claim, and splits the recoveries with his client.

Stuart also bought an old Brinks armored truck and changed the outer signage to read: ‘HE’S TAKING IT WITH HIM.’ He rents the truck and a driver out to disgruntled heirs for three hundred fifty dollars: they pay to have the truck drive behind the hearse that takes their tightwad deceased to the cemetery. Vinnie drives one of the trucks for Stuart and Vinnie’s fiancée Olive will be driving the second one soon.

Stuart paid for both Olive and Vinnie to get firearm training so that they could be issued Exposed Firearm Permits by the Department of Consumer Affairs. Now they can wear holstered but unloaded weapons with their uniforms when they drive the phony armored trucks in funeral processions. Everyone in this town is in showbiz.

Vinnie’s current problem is causing quite a crisis in his house. After Stuart spent all that money getting Vinnie and Olive outfitted and armed, and then buying another armored truck for Olive to operate, she confessed to Vinnie that she has a slight problem when it comes to operating the truck. She never learned how to drive.

It would have been a lot nicer if Vinnie could have had that information before, because now he fears that when Stuart finds out, his own job might be in jeopardy.

After listening to his desperate babbling for about fifteen minutes, I learn that Stuart’s second armored truck won’t be ready for another month or so. This means that Olive may have time to take some driving lessons and get licensed in time for her first funeral job. I don’t think there’s any way in hell that she’ll pull it off. I know that I couldn’t learn to drive that armored truck in only a month or so, and I’ve been driving poorly for over twenty-five years.

I wish him luck, get off the phone and start to prepare the evening meal. The special tonight will be my ‘pasta ala Marina.’ The only thing I know how to do is boil water and cook pasta, so my recipe repertoire consists of numerous large elbow macaroni dishes.

One fan of my cooking is Bernie, Suzi’s huge Saint Bernard, who also lives with us on the boat. Whenever he sees me start to prepare some food he’s at my feet the entire time, hoping for some droppings. This evening I’ll be making my version of a healthy Alfredo sauce, using Land-O-Lakes non-fat half and half, Kraft non-fat grated Parmesan cheese, Smart Beat trans-fat-free butter, and some Knudsen fat-free sour cream.. As the secret ingredient, I’ll be adding a new salt-free garlic salt. The result may be non-taste sauce, but at least it’ll be healthy.

All of these allegedly healthy ingredients have been mandated by Suzi, who now peeks out from her domain – the foreward stateroom, when she smells the aromas. I can usually tell by her expression whether or not I’m on the right track with my formula.

Most of the time a gourmet Chinese meal gets delivered to the boat by the Asian boys, a group of young Chinese teenagers who do everything from wait on and bus tables at the local Szechwan restaurant, to varnish and maintain boats on our dock. Like most of the other people in this Marina, they adore Suzi, so one way or another I manage to have a tasty dinner.

We usually have special nights designated during each week; one for my pasta special, one for entertaining guests, one for eating out, and the others for having the Asian boys serve us dinner. Tonight it’s pasta. The word must have gotten out about my new recipe, because Stuart calls to tell me he’s on the way over. Suzi must have invited him after approving the bouquet wafting toward her stateroom.