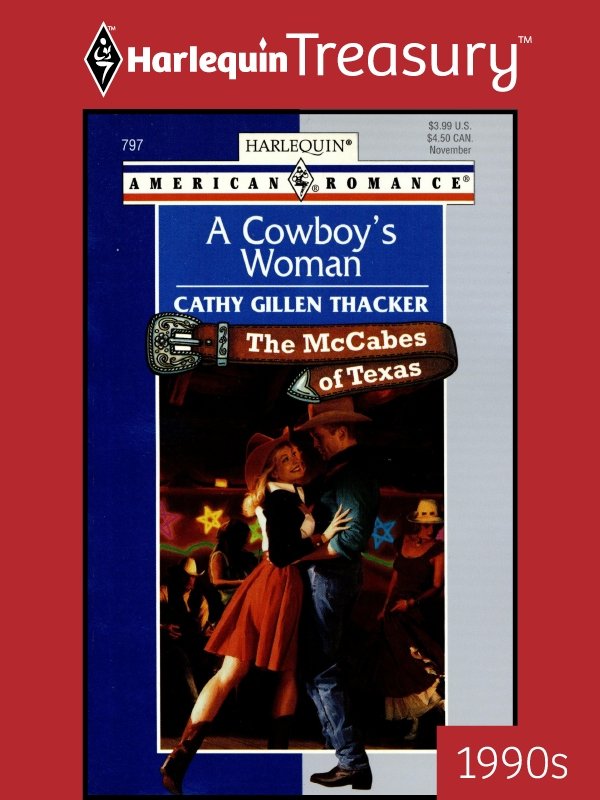 Letter to Reader
Title Page
ABOUT THE AUTHOR
HARLEQUIN AMERICAN ROMANCE
Chapter One
Chapter Two
Chapter Three
Chapter Four
Chapter Five
Chapter Six
Chapter Seven
Chapter Eight
Chapter Nine
Chapter Ten
Chapter Eleven
Chapter Twelve
Copyright
John “Doc” and Lilah McCabe
Happily married for forty years and about to renew their wedding vows. Now they're itchin' for grandchildrenâespecially since they personally delivered
every
baby in Laramie, Texas!
Â
Jackson
Texas tall and fitâthe doctor every mother orders for a son-in-law.
Â
Wade
Self-made millionaire oilman with the Midas touch in businessâand in bed.
Â
Shane
The “baby” of the family and the wildest of the four McCabe boysâ“It'll be a cold day in Hades before I ever settle down!”
Â
Travis
The oldest, the most serious McCabe son is a single cattle rancher about to become an instant father of three....
Dear Reader,
Welcome to another month of wonderful stories at Harlequin American Romanceâwhere you'll find more of what you love to read. Every month we'll bring you a variety of plots from some of the genre's best-loved authors. Harlequin American Romance is all about the pursuit of love and family in the backyards, big cities and wide-open spaces of America!
Â
This month you won't want to miss
A Cowboy's Woman
, the continuation of Cathy Gillen Thacker's series, THE McCABES OF TEXAS. This family of bachelors is in for some surprises when their parents take to matchmaking. And talented author Muriel Jensen brings us
Countdown to Baby
, the second book in the DELIVERY ROOM DADS series. In this three-author, three-book series you'll meet the McIntyre brothers of Bison City, Wyoming. They're in a race to see who'll have the New Year's first baby.
Â
Also this month is Mollie Molay's Daddy by
Christmas
, a compelling story of blended familiesâjust in time for the holidays. And Mindy Neff wraps up her TALL, DARK & IRRESISTIBLE duo with
The Playboy & the Mommy.
Â
Please drop us a note to tell us what you love about Harlequin American Romance and what you'd like to see in the future. Write to us c/o Harlequin Books, 300 East 42
nd
Street, 6
th
Floor, New York, NY 10017.
Â
Happy reading!
Â
Melissa Jeglinski
Associate Senior Editor
A Cowboy's Woman
CATHY GILLEN THACKER