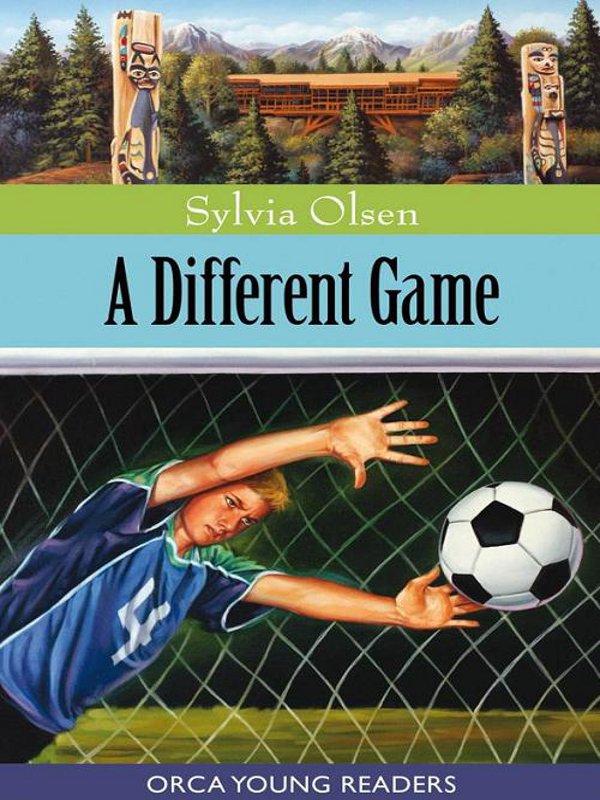 The building and totem poles pictured on the cover of
A Different Game
are artist's renderings of Tseshaht structures and totems in Port Alberni, British Columbia.

Summary
: In this sequel to
Murphy and Mousetrap
, Murphy and his three friends are nervous about trying out for the soccer team at their new school, but a diagnosis of leukemia proves more challenging than anything they encounter on the field.

Dedicated to Amory,
who played a different game and won

Murphy gets to the field late. The other boys are already thereâall three of them. He joins their huddle near the bleachers, catching his breath.

“It's about time,” Albert says. He slaps Murphy on the back.

“Yeah, Murph, we've been waiting for you,” Jeff says. He leans into the circle and frowns at Murphy. Jeff is serious about everything. But he's not the only one who's serious about soccer. Murphy hadn't meant to be late. It's just that Mom makes him do chores before he plays in the morning. “We've got to practice hard,” Jeff continues. “We're going to show Riverside Middle School that the best soccer players come from the Long Inlet Tribal School.”

Albert pounds his chest. “They ain't seen nothing yet,” he says. “All four of us are going to make the team.”

Murphy is excited about going to middle school. Especially about trying out for the soccer team. But deep inside he has a few niggling fears. He liked the Long Inlet Tribal School, even though he'd only been there for one year. He knew everyone at the school. Half of them were related to him. He liked the way Mom came to the school and helped make lunch for all the kids. They always had great stuff like tacos and spaghetti.

At Riverside, Murphy will have to get up early and catch a busâevery morning. And Jeff, Albert and Danny are the only three guys he will know at the new school. There will be at least a couple of hundred kids who will be complete strangers. Mom says once he gets to middle school he'll be making his own lunch in the morning, so he better get used to eating sandwiches. Murphy doesn't like the sound of that at all.

When it comes right down to it, the only thing Murphy likes about going to Riverside is the soccer team. And then again, that is the worst problem of all.

The boys from the tribal school are at a big disadvantage, and Murphy knows it. First of all, they're only in grade seven and most of the middle-school team are going to be in grade eight. Second of all, the other grade sevens trying out for the team will already have been in the school. The coach already knows them; he'll surely pick a kid he knows over one from the tribal school.

“Let's hear it for Uncle!” Albert high-steps and slaps his knees. Murphy doesn't think Rudy is Jeff's uncle, but on the reserve everyone seems to be related to one another. It's easier just to call any older man Uncle and any older woman Auntie; that way you don't offend anyone. “He made the Riverside team, and now he's a soccer superstar. If he can do it, we can do it,” says Albert.

Just a couple of years ago, Uncle Rudy played for the Canadian World Cup soccer team, which makes him about the most famous guy ever to come from Long Inlet Reserve. A lot of people, including Murphy, put it down to the fact that he broke into the Riverview lineup in grade seven.

“But that doesn't mean we've got it made,” Danny says. “It means we have to show our stuff. Especially if all four of us are going to make the starting lineup.”

“Come on then. If we're going to show our stuff, we better get our stuff together,” Murphy says. “Cut the talk. Let's do something.”

The boys take their spots on the fieldâAlbert at center, Danny at offense, Jeff at defense and Murphy in the goal. They play half a field until Levi and Haywire arrive. It's not long before enough boys show up so they can play five a side.

Most of the boys are only going into grade six, and a few of the others aren't serious soccer players. It's just the four of themâAlbert, Danny, Jeff and Murphyâwho will be attending Riverside and trying out for the team. That's the reason there's a soccer game every day throughout the summerâto get ready. Younger boys and even non-soccer players come out to help prepare the grade sevens for the September tryouts. It's been a Long Inlet tradition ever since Uncle Rudy made the team.

Sometimes one player from the reserve gets picked for the Riverside starting lineup, rarely two, but never four. But like Uncle Rudy says, there's never been such a pool of Long Inlet grade-seven talent heading to middle school.

“You go, Albert,” Haywire shouts. “You're the best since Uncle Rudy. Riverside's not going to know what hit them.”

Haywire might be right. Even Uncle Rudy says as muchâmaybe not right out loud, but it's easy to tell that Uncle Rudy is amazed at Albert's skill. It's no secret. All the boys, and pretty much everyone else on the Long Inlet Reserve, know that Albert is the best young soccer player they have ever seen.

Levi passes to Albert. Albert takes the ball as if he's got a magnet in his foot. He dribbles it around Haywire like the guy is standing still. He dekes around Jeff, making him look like he's sitting on his heels, and charges straight for Murphy, who's crouched and ready. Albert aligns his body. At first it looks as if he's going to drill the ball high and directly at Murphy. Murphy's all setâlegs bent, eyes on the ball, hands up. Then, at the last split second, Albert shifts his weight, fakes Murphy out and slams the ball into the back of the net.

“Jeez, Murph, where were you?” he shouts, and then he laughs.

Albert runs to Murphy as he's picking up the ball.

“High five,” Albert says, bouncing on the balls of his feet.

“Forget it,” Murphy says. “You're looking at the starting keeper. Try that again and see how good you are.”

Albert dribbles back to center field.

Danny does a four-finger whistle, and the game starts again.

Levi lets a shot go, and Connor tries one, but they don't have a chance. Murphy is good. Really good.

He gets in front of the ball, hits it, traps it, blocks itâ whatever it takes, Murphy does it. He is on his game, and it feels good. The Riverside coach can't possibly overlook him. But, in the back of his mind, he knows the goalie position is the hardest position to take, especially if the coach already has someone in mind.

This time Albert takes a shot toward the top left-hand corner of the net. He knows it's Murphy's weak spot. For some reason Murphy's left leg has slower reflexes than his right. The whole left side of his body seems to lack the lightning-fast responses that he can count on from his right side.

It's not as if Murphy is slow on his left sideânot compared to other boys. But he can feel a slight lag time in his muscles. The only other person who knows about Murphy's right/left difference is Albert. And when Albert knows a player has a weakness, he makes sure he uses that weakness to his advantage.

Albert is fast, and he's tough. In the winter, when Murphy first started playing soccer with the boys, he thought Albert just blasted his way to being a good player. Bull strengthâbigger is betterâwas what Murphy thought of as Albert's style.

But since the tournament in the spring, when the Long Inlet Buckskins went to Victoria to the Easter tournamentâthe biggest soccer tournament on the Islandâand won the trophy, Murphy has come to know a few other things about Albert: he is smart; his eye doesn't miss a thing; and he plays your weaknesses.

Before the Easter tournament, when Uncle Rudy asked the team what part of the body was most important to a good soccer player, Albert had been the first one to shout an answer. “Muscle,” he said, flexing his arms. Danny said legs. Jeff said feet.

“No, think about it,” Uncle Rudy said, pointing to his head.

That's when Murphy figured it out. “The brain,” he said.

“You got it right, Murph,” Uncle Rudy said. “And don't you boys forget it. A soccer player has to use his head first.”

But smart wasn't something Murphy would have called Albert. Not until recently. Now Albert is sharp.

He watches all the players. He knows what they're good at and what they're not so good at. No matter how hard Murphy tries to compensate for his slower left side, he doesn't fool Albert.

The ball sails right past Murphy. No higher than his head, but just out of reach and faster than he can respond to.

“You're going to blow those middle-school coaches away,” Jeff says. “Albert Adams, the new starting center for the Riverside Strikers, coming right up.”

One more thing about Albert. He inspires other players. He's a hero to younger boys like Haywire. They dream that one day they will play like Albert, but for now they are happy to feed him the ball and cheer him on.

Wednesday is Uncle Rudy's day off. So by 10:00 am, he's at the field waiting for the boys to show up.

“How's it been going?” he asks Jeff and Murphy when they arrive at the bleachers. “Have you guys been running? Are you doing the drills I gave you last week? Are you working on your squats?” He points at Murphy.