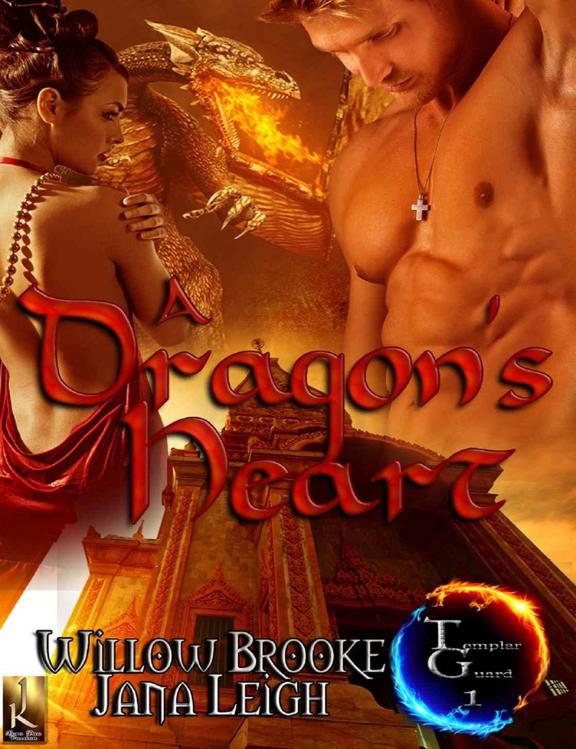 In book one of Templar Guard:  Hidden for centuries, the ancient breed of dragons have remained out of the public eye and blended amongst the humans.  When a governmental threat for a new world order arises, it falls upon them and the other members of the Templar Guard to save the human race and their own kind.

Drakk is the leader of their clan, with no intention of taking a mate.  His jaded heart is encased in a brick wall from loss and heartache.  He fights the immediate attraction to the little female, determined to remain detached.

Jex is the comedian of the clan, finding a joke in any situation to lighten the mood.  His witty lines and attitude rake over Drakk’s last nerve, winding up in blows in most cases.

Aislinn has no idea she is a descendant of the original linear of witches.  Her future was foretold by an ancestor, unlocking the clues to save the natural world and its inhabitants, both magical and human.  When she finds not only one but two mates who happen to shift into huge dragon beasts, it is a little hard to swallow.

The human race on Earth is threatened and the dragons are sighted to be the weapon needed to obtain the goal for the elite.  Will they comply with what has been foretold, or leave the humans on their own while the dragons fly off to keep to their solitary lives?

By Jana Leigh and Willow Brooke

All cover art and logo © Copyright May 2014 by JK Publishing, Inc.

This eBook is licensed for your personal enjoyment only. This eBook may not be re-sold or given away to other people. If you would like to share this book with another person, please purchase an additional copy for each recipient. If you are reading this book and did not purchase it or it was not purchased for your use only, then please return to Smashwords.com, and purchase your own copy.

This is a work of fiction. Names, places, characters, and incidents either are the product of the author’s imagination or are used fictitiously and any resemblance to any actual persons, living or dead, organizations, events, or locales are entirely coincidental.

No part of this book may be reproduced, stored in a retrieval system, or transmitted by any means without the written permission of the author and publishing company.

Please always be aware of where you are purchasing your electronic books and from whom. Only purchase from reputable, licensed individuals such as Amazon, Barnes & Noble, iTunes,
etc.
If ever in doubt, let the author know of a suspected site illegally selling their works—remember to include a link to the site where you have found a book you suspect of being pirated. It only takes a moment of your time, but you will forever have the gratitude of an author.

About the eBook Purchased

Your purchase of this eBook allows you to only ONE LEGAL copy for your own personal reading on your own personal computer or device. You do not have resale or distribution rights without the prior written permission of both the publisher and the copyright owner of this eBook. This eBook cannot be copied in any format, sold, or otherwise transferred from your computer to another through upload to a file sharing peer-to-peer program, free or for a fee, or as a prize in any contest. Such action is illegal and in violation of the U.S. Copyright Law. Distribution of this eBook, in whole or in part, online, offline, in print or in any way or any other method currently known or yet to be invented, is forbidden. If you do not want this eBook anymore, you must delete it from your computer.

If you find any e-books being sold or shared illegally, please contact the author or the publishing company.

We would like to thank all of our readers: We hope you enjoy our combined work as much as we enjoyed writing it together. We can't wait to see where the next one takes us and hope you come along for the ride.

Excerpt from Releasing the Spirit

Drakken stood and stretched his tall, muscular body. He didn’t look in the mirror hanging in his room, because the reflection never changed. It hadn’t in over 500 years when he first saw himself in a reflection in the water. If he had looked, he would have seen a large man, tall and lithe, with his rippling muscles showing his strength in their smooth bulges. His hair was long, he considered it blonde, but according to the women who helped take care of the dragons that were hidden, it was strawberry blonde. His eyes were the only things he could honestly say had changed. When a dragon was young, they were cloudy, almost changing with his mood at every second. Now that he had matured, they were piercing blue. He actually liked them because he could scare the shit out of humans with one glance. His brother dragons would snicker, but it was a source of entertainment, which sometimes they needed as the days of hiding had grown long.

Many years ago, Trevor Langston I had come to him and explained how he uncovered their existence. Apparently, their secrecy had been blown on more than one occasion. He had genuinely wanted to help; however, after one hundred years, his ancestors didn’t feel the same way. It was becoming evident that he and his brother dragons were going to have to make a move. They allowed the humans to think they had power because it suited their purpose, but there was no way they would allow it to go on much longer, they were getting a little too demanding.

At the time, Drakken had thought the plan to give the dragons a place to live, and start afresh had been a good idea. Dragons were not known for their people skills with humans. They had little use for them other than to bed the females, or watch their little wars, and sometimes give them information about the other side to keep the conflict going. They had their morals though. They never gave away information to men who were evil. No, they would just kill them, doing the world a favor.

Moving somewhere protected and off the grid had been a solution at the time, and honestly, they had been curious how far the humans would go to protect them. May sound cold, but if the humans put them up in a nice place, it would be okay to just use them. The place they designed for them had been nice and clean, and more importantly, they had given them all the amenities they wanted.

It was last night when the men had gotten important information though, and after last night’s little meeting, they were going to hash this out in private. The men had insisted on one room with no cameras. The idiots kept trying to trick them, but dragons had the power to let them hear or not.

Drakken got ready for his day and smiled a little. It was time the humans who thought they were in charge, learned that they weren’t.

The men gathered in the room where they knew they could speak freely. Up until now, they had let the humans think they could watch them whenever they chose to. It amused them, a game if you will.

Drakk, as only his friends called him, stood at the front, his men either leaning against the wall, or sitting in the chairs. Being their leader meant everything to him. They were family, and that meant everything to a dragon, there were so few of them to begin with.

“So last night, Trevor Langston IV decided he was going to inform us the testing of our powers would begin next week. We have never been asked to show them what we can do, and frankly they don’t need to know,” Drakk said.

The second oldest, his right hand man, and the arrogant playboy of the group, Daganth, or Dag for short said, “Why do you think they are wondering about our powers now?”

“‘Cause we are perfect and strange beings?” the youngest dragon, Jexual asked. He was the comedian, keeping their moods from clashing with each other.

“Because we are obviously more intelligent,” Brakton said.

“Oh I know, because we're vicious scary beasts who they are trying to control in order to take over the world, and make cool little minions in our name. Making us omnipotent,” Xavier said.

Drakk rolled his eyes. “Guys, think. Seriously, I don’t care why they are taking interest now, but they are. That was our rule when we started this, we would not be used. So, when are we leaving? I think we should find caves by the ocean. Lazing our days away with a view. I am a little sick of all the interaction they insist on anyway. I have my cave still in the mountains, I could go there, but the cold seems a bit much these days.”

“Hell yeah,” Dag laughed and rubbed his hands. “I have always wanted to see the babes on the beaches do the topless thing. I have seen pictures.” His eyebrows wagged suggestively, showing his ornery playboy nature.

They talked around the room and he shook his head as he listened to them argue about where they were going. Not one of them worried about how the hell they were going to get out of there. Because basically, there was never a question of whether they could hold them there. The fact of the matter was—they couldn’t. Drakk was one of the oldest dragons on Earth, and because of that, he had matured into his powers. His gold scales revealed in their kind that he was one of the elite and the wisest dragon.

Drakk kind of hated the title; it seemed like a lot of work if you asked him. Taking these men under his wings had been more than enough. At the time, Drakk had been alone, and now he had a family. If someone tried to hurt them, there would be hell to pay.