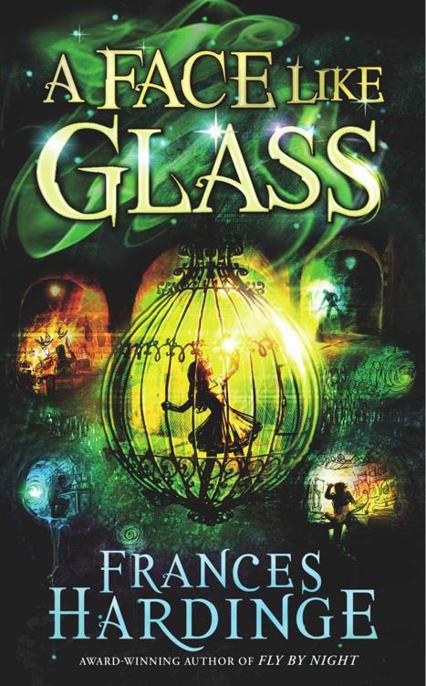 To my one-year-old nephew Isaac, in whose eyes I see the world reflected, and find it to be wondrous and full of surprises

Prologue: The Child in the Curds

A Crossing of Paths

Curiosity and the Cat Burglar

Beauty and the Beasts

A Drop of Madness

A Loss of Face

The Screamer in the Dream

The Master of Craft

Prologue:
The Child in the Curds

One dark season, Grandible became certain that there was something living in his domain within the cheese tunnels. To judge by the scuffles, it was larger than a rat, and
smaller than a horse. On nights when hard rain beat the mountainside high above, and filled Caverna’s vast labyrinth of tunnels with the music of ticks and trickles and drips, the intruding
creature sang to itself, perhaps thinking that nobody could hear.

Grandible immediately suspected foul play. His private tunnels were protected from the rest of the underground city by dozens of locks and bars. It should have been impossible for anything to
get in. However, his cheesemaker rivals were diabolical and ingenious. No doubt one of them had managed to smuggle in some malignant animal to destroy him, or worse still his cheeses. Or perhaps
this was some ploy of the notorious and mysterious Kleptomancer, who always seemed determined to steal whatever would cause the most chaos, regardless of any personal gain.

Grandible painted the cold ceiling pipes with Merring’s Peril, thinking that the unseen creature must be licking the condensation off the metal to stay alive. Every day he patrolled his
tunnels expecting to find some animal curled comatose beneath the pipes with froth in its whiskers. Every day he was disappointed. He laid traps with sugared wire and scorpion barbs, but the
creature was too cunning for them.

Grandible knew that the beast would not last long in the tunnels for nothing did, but the animal’s presence gnawed at his thoughts just as its teeth gnawed at his precious cheeses. He was
not accustomed to the presence of another living thing, nor did he welcome it. Most of those who lived in the sunless city of Caverna had given up on the outside world, but Grandible had even given
up on the rest of Caverna. Over his fifty years of life he had grown ever more reclusive, and now he barely ventured out of his private tunnels or saw a human face. The cheeses were
Grandible’s only friends and family, their scents and textures taking the place of conversation. They were his children, waiting moon-faced on their shelves for him to bathe them, turn them
and tend to them.

Nonetheless, there came a day when Grandible found something that made him sigh deeply, and clear away all his traps and poisons.

A broad wheel of Withercream had been left to ripen, the pockmarked skin of the cheese painted with wax to protect it. This soft wax had been broken, letting the air into the secret heart of the
cheese and spoiling it. Yet it was not the ruined cheese which weighed Grandible’s spirits to the ground. The mark set in the wax was a print from the foot of a human child.

A human child it was, therefore, that was trying to subsist entirely on the extraordinary cheeses produced by Grandible’s refined and peculiar arts. Even nobility risked only the most
delicate slivers of such dangerous richness. Without as much as a morsel of bread or a splash of water to protect its tender stomach from the onslaught of such luxury, the unknown child might as
well have been crunching on rubies and washing them down with molten gold. Grandible took to leaving out bowls of water and half-loaves of bread, but they were never touched. Clearly his traps had
taught the child to be suspicious.

Weeks passed. There were periods during which Grandible could find no trace of the child, and would conclude with a ruffled brow that it must have perished. But then a few days later he would
find a little heap of nibbled rinds in another under-alley, and realize that the child had just roamed to a new hiding place. Eventually the impossible fact dawned upon him. The child was not
dying. The child was not sickening. The child was thriving on the perilous splendours of the cheese kingdom.

At night Grandible would sometimes wake from superstitious dreams in which a whey-coloured imp with tiny feet pranced ahead of him, leaving tiny weightless footprints in the Stiltons and
sage-creams. Another month of this and Grandible would have declared himself bewitched. However, before he could do so the child proved itself quite mortal by falling into a vat of curdling
Neverfell milk.

Grandible had heard nothing untoward, for the creamy ‘junket’ was already set enough to muffle the sound of the splash. Even when he was stooping over the vast vat, admiring the
fine, slight gloss on the setting curds, and the way they split cleanly like crème caramel when he pushed his finger in to the knuckle, he noticed nothing. Only when he was leaning over with
his long curd-knife, ready to start slicing the soft curds, did Grandible suddenly see a long, ragged rupture in their surface, filling with cloudy, greenish whey. It was roughly in the shape of a
small, spreadeagled human figure, and a row of thick, fat bubbles was squirming to the surface and bursting with a sag.

He blinked at this strange phenomenon for several seconds before realizing what it had to mean. He cast aside his knife, snatched up a great wooden paddle and pushed it deep into the pale ooze,
then scooped and slopped the curds and whey this way and that until he felt a weight on the end. Bracing his knees against the vat, he heaved back on the handle like a fisherman hauling in a baby
whale. The weight strained every joint in his body, but at last a figure appeared above the surface, shapeless and clotted with curds, and clinging to the paddle with all the limbs at its
disposal.

It tumbled out, sneezing, spluttering and coughing a fine milky spray, while he collapsed beside it with a huff, breathless with the unexpected exertion. Six or seven years old to judge by the
height, but skinny as a whip.

‘How did you get in here?’ he growled, once he had recovered his breath.

It did not answer, but sat quivering like a guilty blancmange and staring from under pale soupy eyelashes.

He was an alarming enough sight for any child, he supposed. Grandible had long since abandoned any attempt to make himself fair and presentable in a way of which the Court would approve. In
fact, he had rebelled. He had deliberately forgotten most of the two hundred Faces he had been taught in infancy with everybody else. In his stubborn solitude he wore the same expression day in and
out like a slovenly overall, and never bothered to change it. Face 41, the Badger in Hibernation, a look of gruff interest that suited most situations well enough. He had worn that one expression
so long that it had carved its lines into his features. His hair was grizzled and ragged. The hands that gripped the paddle were darkened and toughened by wax and oils, as if he were growing his
own rind.

Yes, there was reason enough for a child to look at him with fear, and perhaps it really was afraid. But this was probably nothing but an act. It had decided that terror was more likely to win
him round. It would have chosen a suitable Face from its supply, like a card from a deck. In Caverna lies were an art and everybody was an artist, even young children.

I wonder which Face it will be
, Grandible thought, reaching for a bucket of water.
No. 29 – Uncomprehending Fawn before Hound? No. 64 – Violet Trembling in Sudden
Shower?

‘Let’s see you, then,’ he muttered, and before the curled figure could react he had thrown the water across its face to wash away the worst of the curds. Long, braided hair
showed through the ooze. A girl, then? She made a panicky attempt to bite him, showing a full set of milk teeth with no gaps. Younger than he had thought at first, then. Five years old at the most,
but tall for her age.

While she sneezed, spluttered and coughed, he grabbed her small chin and with a heavy rind-brush began clearing the rest of the clogging Neverfell curds from her features. Then he snatched up a
trap-lantern and held it close to the small face.

However, it was Grandible, not the child, who gave a noise of fear when at last he saw the countenance of his captive. He released her chin abruptly, and recoiled until his back halted with a
clunk against the vat from which he had saved her. The hand holding up his trap-lantern shook violently, causing the little glowing ‘flytrap’ within the lamp to snap its fine teeth
fretfully. There was silence, but for the tallowy drip of curds from the child’s long, clogged braids, and her muted snuffles.

He had forgotten how to look surprised. He was out of practice in changing his expression. But he could still feel that emotion, he discovered. Surprise, incredulity, a sort of horrified
fascination . . . and then the heavy onslaught of pity.

‘Thunder above,’ he muttered under his breath. For a moment more he could only stare at the face his brush had revealed, then he cleared his throat and tried to speak gently, or at
least softly. ‘What is your name?’

The child sucked her fingers warily, and said nothing.

‘Where are your family? Father? Mother?’

‘Where did you come from?’

Only when he had asked her a hundred such questions did she offer a whispered, hesitant response that was almost a sob.

And that was the only answer he could get from her.
How did you get in? Who sent you? Who do you belong to?

She was alone, this child. This odd and terrible child. She was as alone as he was. More so than he, in fact, despite all his attempts to hide away. More so than a child that age could possibly
realize.

Suddenly it came to Grandible that he would adopt her. The decision seemed to make itself without asking him. For long years he had refused to take an apprentice, knowing that any underling
would only seek to betray and replace him. This child, however, was a different matter.

Tomorrow, he would organize a ceremony of apprenticeship with his strange, young captive. He would invent a parentage for her. He would explain that she had been scarred during a cheese-baking
and had to keep her face bandaged. He would guide her pen to enter her name as ‘Neverfell Grandible’ on the documents.

But today, before anything else, he would send out for a small, velvet mask.

The Weapon of Night by Nick Carter
Giving It Up: Pushing the Boundaries, Book 1 by Audra North
An Unsuitable Job for a Woman by P. D. James
Fall and Rise by Stephen Dixon
Baby, Come Back by Erica Spindler
The Hunt by Allison Brennan
Naked Economics by Wheelan, Charles
Metal Boxes by Black, Alan
Pursuit of the Zodiacs by Walsh, Nathan
The Mammoth Book of Celebrity Murders by Chris Ellis