Read A Farewell to Legs Online

A Farewell to Legs 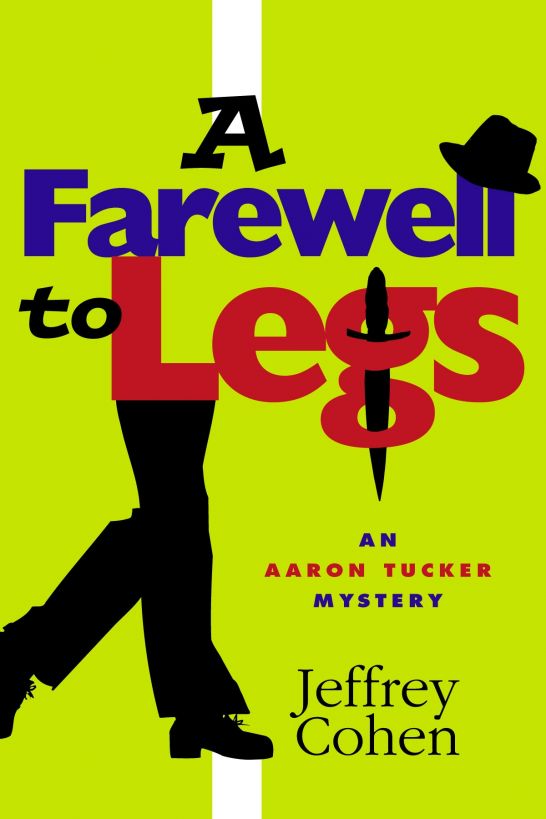 A Farewell to Legs
An Aaron Tucker Mystery
Jeffrey Cohen

No part of this book may be reproduced in any form or
by electronic means, including information storage and retrieval
systems, without written permission from the publisher, except by a
reviewer, who may quote passages in a review.

All the characters in this book are fictitious, and
any resemblance to actual persons, living or dead, is purely
coincidental.

To
The Brotherhood of the Tray

Praise for Jeffrey Cohen and A Farewell to Legs

Cheri (pronounced “She-REE”) Braxton got out of bed
and walked to the bathroom door, not bothering to cover her naked
body with a sheet, the way they do in the movies. She’d never
understood that: two people have just spent the night going at it
like sex has just been invented, and the next morning, they’re
always covering up, as if they hadn’t just spent ten hours looking
at each other’s good parts.

The guy in her bed, Louis (pronounced “Louis”)
Gibson, pushed back the few strands of hair left on his head and
admired the view as Cheri walked to the bathroom. He smiled as he
always did, and it was convincing, ingratiating, and
emotionless.

“Baby,” he said, “I like nothing better than
watching you walk away.”

She stopped, turned, and modeled her form, giving
him a good long look. “What’s the matter, Louie?” she asked, her
voice a disgusting drawl she thought sounded cute. “You don’t like
seeing me walk toward you?”

“Of course I do,” he said flatly, dismissing her. “I
was trying to be romantic, and you spoiled it.”

She harrumphed, and walked into the bathroom. Cheri
had intended to splash some cold water on her face and pee, but if
that was the kind of attitude he was going to have, Louie could
just lie there and wait while she took a long hot shower. She
turned on the water in the tub and opened the medicine cabinet.
Might as well brush her teeth, too.

Louis put his hands behind his head and lay back on
the pillow. This thing with Cheri was already starting to get old,
he thought. Six weeks, and she was pissing him off as often as his
wife. At least his wife had waited until they were married a couple
of years before she started complaining that he wasn’t romantic
enough. So he’d gotten her pregnant again, and then she had so much
to do watching the boys that she didn’t have time to nag about his
ignoring goddamn Valentine’s Day.

Cheri, though, was another story. She’d broken the
land speed record for annoying Louis. A nice ass—he’d certainly
admit she had that—but she had a mouth on her, too, and who needed
that in a mistress? Mistresses were for sex, for chrissakes. If he
wanted backtalk, he could stay home. It was a good thing this
relationship would be over soon.

Louis smiled as he lay there. If he wanted, he could
find six or seven other girls within a week—exotic ones, too. Not
white bread bores like Cheri Braxton. Life was good these days. The
right people were getting elected, and that meant contributions
were pouring in. He had his pick of the women he knew, and he had
plenty of money. More than anyone knew. What else did a man
need?

Cheri stayed in the shower as long as she could,
until she couldn’t think of any other body parts that needed
cleaning. And the longer she stayed under the hot water, the more
steamed she got.

She got out of the shower and put on a terrycloth
robe hanging from a hook on the back of the bathroom door. Screw
him! It wasn’t like she loved the little jerk. She didn’t even like
him. But he had powerful friends, and she had ambition. Still, no
job she could get in this government was worth having to put up
with him. She could find somebody else to screw, and maybe even
enjoy it.

Cheri opened the robe and looked at herself in the
full-length mirror on the back of the door. Not bad at all for 27.
Everything was still where Nature had put it. Gravity hadn’t
started its inevitable pull to the ground. She looked damn good, if
she did say so herself. Better than she’d been giving herself
credit for. Better than anybody old Louie out there would see
again, for a long, long time.

That was that, then. It didn’t even take much
courage to decide. She’d just go out there right now and tell Louis
this was the last time they’d see each other. Let him find somebody
else to watch walking away from the bed.

She tossed back her damp hair in a defiant gesture,
left the robe open (so he could see what he’d be missing), and
marched out to give Louis his marching orders.

The only thing that stopped her was the stunned,
amazed expression on his face. That, and the kitchen knife sticking
out of his chest.

Part 1: The Lizard
Chapter
One

I
n retrospect, it all
started with the lizard.

I stared into my bedroom closet with what I’m sure
was the same expression Dr. Livingstone had assessing the Nile for
the first time, a combination of absolute wonderment and complete
confusion. My wife Abby stood behind me, doing her very best not to
snicker.

“They make very low-maintenance pets,” she said in a
soothing tone, as if she were addressing a potentially dangerous
mental patient. “You don’t have to walk them, you very rarely have
to clean the aquarium and they never make any noise. Try the blue
one.”

She indicated a royal blue Gap t-shirt I’d been
avoiding. I turned to her, surprised, and pointed at it. Yes, Abby
nodded, that one.

“I can wear a t-shirt to a high school reunion? And
why, exactly, does our daughter even
need
a pet that looks
like it escaped from The Land That Time Forgot?”

Abby smiled tolerantly, once again secure in the
knowledge that I would, indeed, collapse into a heap of quivering
jelly without her. On her way to the bedroom closet door, she
pressed by me (and I did very little to get out of her way, thus
necessitating as much pressing as possible).

“Leah loves animals. I want to encourage her to
develop that interest, and this is the easiest way to start her on
her way. Don’t worry—you won’t have to do anything.”

My wife, befitting a woman of her dignity and
accomplishment, stuck her tongue out at me. She leaned into the
closet (we have a lean-in closet in our bedroom, meaning that it’s
roughly the size of a small refrigerator, so all you can do is lean
in) and came out with the blue T-shirt, a pair of black jeans I
actually fit into, and my black sport jacket, which is made of
something that approximates suede without actually harming any
animals to produce it. Abby laid the clothes out on the bed.
“There,” she said.

“My Hollywood scriptwriter disguise,” I said,
nodding. On the rare occasions that one of my screenplays has
generated enough interest for me to actually meet with a producer
(and that is upwards of once), I have worn this exact ensemble. I
began to take off my hideous flannel shirt (with only two holes in
it) and my worn-to-the-white jeans (three holes, but two are in the
knees).

“Certainly,” Abby said. “Show your old classmates
how cool you are.”

“Cool, my love, is something I’ve never been able to
pull off successfully.”

“Fake it,” she said. I grunted at that, and
considered the question of the lizard again.

“So let’s suppose—and I want to stress that
suppose
—that I agree to this lizard thing. What does
Jurassic Junior eat?”

It’s so rare I get to see my wife blush. As with
everything else, it becomes her, but it’s unusual that she’d be
flustered enough to let it show. I braced myself. She mumbled
something.

“Live? As in alive? We’re asking our eight-year-old
to feed one living thing to another living thing as a
character-building experience?” During this exchange, I had managed
to don my entire screenwriter disguise, minus the jacket (which
would make me sweat no matter what the weather, and so was best
left for later).

“Well, she’s perfectly okay with it,” Abby said as I
sat down again to put on my classy sneakers. “Melissa has
one. . .”

That’s all I needed to know—the discussion was over.
Leah and her friend Melissa are actually the same person, but you
need two bodies to harness all their combined energy. They’re
constantly in motion, constantly talking, and constantly
together
, so whatever one does, the other must certainly do.
There’s no arguing with Melissa. Ever.

“Where do we get these worms?” I sighed. “Do we have
to dig in the back yard? Remember, we have no, um, soil in the back
yard.”

“The pet store. Then we keep them in the
refrigerator.”

“The same refrigerator where we keep
our
food?” She nodded, and I think actually looked a little
nauseated.

I stood up and put an arm over my wife’s shoulder.
“Is there any power on heaven or earth that can stop this?”

“Any chance I can get some sex out of saying yes?” I
figured it was worth a shot.

“Not tonight. I’ll be asleep long before you get
home.”

From downstairs, I could hear the doorbell ring,
followed by Leah’s shrill shriek. “It’s Uncle Mahoney!” Abby and I
started wearily toward the stairs.

The Butterfly Code by Wyshynski, Sue
Choices by H.M. McQueen
The Art of Love and Murder by Brenda Whiteside
The Marvellous Boy by Peter Corris
Keeping Karly (Siren Publishing Ménage Amour) by Rachel Clark
The Lost Fleet: Genesis: A Slaver Wars Novel by Raymond L. Weil
Lawman in Disguise by Laurie Kingery
Weirdo by Cathi Unsworth
(5/20)Over the Gate by Read, Miss
The Aryavarta Chronicles Kaurava: Book 2 by Krishna Udayasankar