Read A Fireproof Home for the Bride Online

A Fireproof Home for the Bride 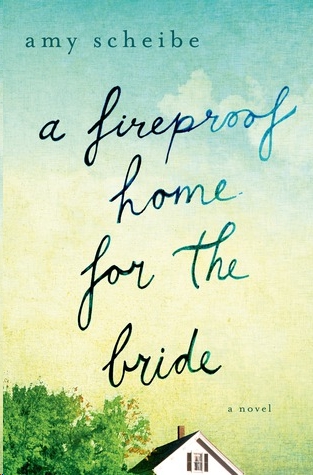 For Catherine, Ann, and Hedda,

the glittering points of my triangle

What shall I do, if all my love,

My hopes, my toil, are cast away,

And if there be no God above,

To hear and bless me when I pray?

His Wonders to Perform

A hazy dawn broke over a small lean-to of weathered gray planks and multicolored leafy branches that had been meticulously assembled the day before, the work completed mostly between the morning chores and those dispatched in the afternoon. Emmy looked up at the speckled yellow covering of boughs that she had carefully chosen from the row of shrubs and smaller trees that edged the barren late-autumn field of sheared cornstalks, their papery remains bent toward the earth, waiting for the punishment of the long Minnesota winter to grind them into dust.

Emmy exhaled into the frisky air of late autumn, gauging the temperature by how quickly the cloud of visible breath dissipated. She’d been quiet for the better part of an hour, too excited to long for the fitful sleep that had been disrupted by her mother’s insistent “get up and out, he’s here, go on,” as though the girl needed more encouragement. Her heart had felt as though a small, tremulous rabbit had somehow gotten down inside of her and wanted desperately to be out in the field, in the shelter, waiting. Emmy had been given a cup of black coffee from Ambrose’s thermos when they had first arrived, and the sweet, bitter taste of it now lingered in the pockets of her cheeks, where her tongue kept poking in an attempt to keep her voice still. All summer, she’d waited for this day to arrive, for Ambrose to return from college in Michigan and make good on his promise to take her on her first deer hunt. When he’d gone off to school four years before, she’d been only eight—old enough to shoot a BB gun, but too small to keep a rifle from bruising her shoulder. Since then, determined not to fail when the time came, she’d carried endless pails of milk and loaded countless hay bales onto flatbeds until her shoulders were high and square like those of a young man.

It should have been her grandfather next to her in the blind. He’d always told her that when the time came, when he felt she was ready, he would take her out into the shelter belt of trees next to the strip of land they planted every year with feed corn in order to draw the big and small game for hunting. Instead she waited with the neighbor boy—now a man—who had served as the third point of their triangle: the replacement grandson, the respectful and diligent student of the outdoors. The three of them had trapped gophers and fox, caught walleyes and northerns, and on lazy afternoons sat in a row, whittling objects out of soft wood, the careless soapy shavings drifting across the porch at their feet. It didn’t seem right that the old man wasn’t present, but at least his gun was there, cradled in Emmy’s lap. The rifle was exactly like the one he had used in the army—not ideal for a young girl, but its familiar length of walnut wood and the satisfying throw of the cold metal bolt felt right to Emmy. When her grandfather died quick-slow from a thing gone wrong in his head, this rifle was promised to her, and she was promised to Ambrose. That had been when she was ten. Now Emmy was twelve, and with each passing year, her understanding of the world grew by inches to where she was almost a woman, certainly no longer content to be a child.

The first orange ray of sun split through the slot they’d carved in the screening plank, and a sharp stripe of light illuminated the skim of grassy green behind Ambrose’s blue eyes. He’d gone away to college a lanky, quiet boy and come back a sturdy but no more voluble man. Emmy looked at his nose in profile, surprised by how it had taken on the prominently pointed shape of an arrowhead, the kind chipped from opaque flint that her grandfather had taught her to find, brown against the windblown black soil of spring. Once they had found bones as well, and not far from where she currently sat, a jawbone that retained long, sharp, glossy yellowed teeth.

At the crunch of rustled leaves in the distance, Ambrose moved from his squat into a creeping crawl, picking up his shotgun as he squinted into the piercing daylight. A slight nod of his head brought her gaze level alongside of his. The deer was small and tentative, its spindled legs lifting as though recoiling from the singe of a hot frying pan; the animal’s velvety nose lowering and stretching toward the mound of shucked corn Emmy had piled a respectable distance from the blind. From instinct, she bit off her right mitten—the rough red wool of it lingering on her bottom lip—and raised the smooth wooden flank of the gun to the point of her high cheekbone, letting the stock settle into its groove against her shoulder, just as she had done hundreds of times since her father had allowed her to take ownership of the gun in January, her twelfth birthday. Most girls would treat a baby doll as well as Emmy had polished and cleaned that Springfield, meticulously running the oiled rags over, around, and through the elegant length of it.

“Go,” Ambrose said so minutely above a whisper that she might have imagined the word. Emmy silently righted the tiny ladder sight atop the gun’s metal and lined it up with the notch at the end of the barrel. She recalled her grandfather’s scorn of men who had come back from the war and affixed fancy scopes to their hunting rifles, as though this gave them an advantage over the animal that they didn’t deserve. Emmy inhaled deeply and began counting as she waited for the deer to finish feeding. It raised its head in Emmy’s direction—a mistaken benediction—the tufted white ears pointing forward and then back, a hasty indication of something ill on the wind, which caused the deer to lift its nose higher. Emmy opened her left eye on the number sixty and then pinched it shut again. Though she had tossed on her pillow the night before, her nerves were now absent as she slipped her finger into the trigger guard on the next inhale and gently squeezed. The crack of the shot echoed beyond the small makeshift room and out into the field, where it ripped through the flurrying sound of many wings ascendant, and Emmy couldn’t help sitting back on her heels, defeated, knowing that this was the one shot of the day, certain that she’d acted in haste. His low, soft whistle told her otherwise.

“Well, I never,” Ambrose said, lifting the earflap of his winter cap with a finger and scratching at his scalp before picking up a leather haversack that she knew had been given to Ambrose by her grandfather, who had used it during the First World War. “Let’s go dress her.”

“Is that all?” she asked, the gun only one bullet lighter in her hands but bearing the same weight as a length of folded cloth for all it meant to her in the order of the morning.

He took his hat off completely and struck his thigh with it. “All? You kill your first deer in the first hour of the first day with your first shot?” She fought down a prideful smile as she looked up into his reserved face, though she could sense a glint of ownership flicker deep in his eyes. He broke open his shotgun, slipping the unspent cartridge into his coat pocket before bending the gun in the crook of his arm and muttering, “Is that all.” He shook his head and walked away from the blind. She followed, her legs unsteady in the warmth of the sun. They’d had a good number of Indian summer days, and the heavy field coat she’d chosen in the cold kitchen was now smothering. She shrugged it off and let it drop to the inky dirt as she took two steps to each of his in order to reach the prostrate animal in stride. He lifted the doe’s head and turned the snout skyward. The eyes were wide open and seemed to Emmy as if they hinted at a more complicated purpose than simple life or death. As she leaned closer, Emmy’s tight white braids brushed the deer’s cheek, and Emmy caught her own beveled reflection in the glassy eye. Under the muzzle, at the base of the velvet tan neck, Ambrose pointed at a muddy-colored dot where the bullet had entered.

“I did that,” she said, reaching a bare finger to the hole.

“Heart shot,” he replied. “Cleanest I ever seen.” With a quick flick of his wrist, he shifted the deer onto its back. “Yearling. She’s small, but pretty fattened up.”

Hot SEALs: SEAL's Ultimate Challenge by Elle James
Trickster by Nicola Cameron
Claimed by the Rogue by Hope Tarr
Hiss and Tell by Claire Donally
The Adventuress by Tasha Alexander
Berry And Co. by Dornford Yates
B000FCJYE6 EBOK by Hornbacher, Marya
The Last Oracle by James Rollins
Beauty and the Werewolf by Mercedes Lackey
Road to Desire by Piper Davenport