Read A Fling with the Greek Billionaire Online

A Fling with the Greek Billionaire 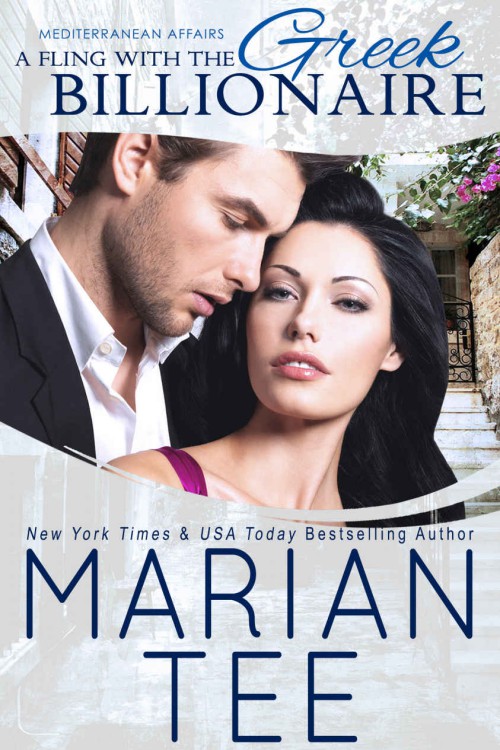 A FLING WITH THE GREEK BILLIONAIRE (STANDALONE)

About
A Fling with the Greek Billionaire

She’s an impulsive and flirtatious artist. He’s a workaholic billionaire and a control freak. A one-night stand is all that should work for the two of them, but all it takes is a single taste to make them realize they want more.

28-year-old Nik Alexandropoulos desires revenge. Furious at Daria’s deception, Nik is determined to teach her a lesson she won’t ever forget. He would do everything to make the beautiful liar fall in love with him. He would make her believe in a future for them, a damn happy-ever-after, and once she does, it would be Nik’s absolute pleasure to destroy her dreams and introduce Daria to the
other
woman he intends to marry.

This can be read as a standalone, but a prequel for
A Fling with the Greek Billionaire
is also available.

Enjoy exclusive excerpts about my newest and upcoming releases by signing up for my newsletter
.

His Fair Lady
– Prince Julian knows the blind fortune teller Cass is everything he wants in a woman, but she can never be his bride.

24-year-old school teacher Mairi, a hopeless romantic, thinks all her dreams will come true with Greek billionaire Damen Leventis. Problem is, he only wants her as a mistress.

The Art of Catching a Greek Billionaire
(
FREE!
)

The Art of Trusting a Greek Billionaire

The Art of Loving a Greek Billionaire

The Art of Forgiving a Greek Billionaire

The Art of Wedding a Greek Billionaire

The Art of Kissing a Greek Billionaire
(FREE!)

Schoolteacher Velvet enters into a marriage of convenience but is too proud to tell her Greek billionaire husband it’s because she’s in love with him.

The Greek Billionaire and I

27-year-old Stavros Manolis is a conservative Greek billionaire. They have nothing in common except…that one night they had with each other.

The Greek Billionaire and His Secretary
(
FREE
)

Forever and Ever, My Greek Billionaire

A Fling with the Greek Billionaire
–
Furious over his lover’s deception, control freak billionaire Nik is determined to teach the free-spirited Daria a lesson on revenge.

The Greek Billionaire and the Nanny
– Coming Soon!

How Not to be Seduced by Billionaires (4 parts)
– 24-year-old Yanna has old-fashioned ideals about love, and all of it are put to the test when her CEO billionaire boss, Constantijin Kastein – also
Netherlands’ #1
Playboy – sets out to seduce her.

How Not to be Seduced by Rockstars (2 parts) – All
eccentric senator’s daughter Saffi wants is a taste of freedom when she attends a concert disguised as an experienced groupie. But she gets more than she bargains for when Staffan Aehrenthal – also Sweden’s #1 Sex God – picks her out from the crowd.

(Note:
The Rockstar and His Fangirl
is a short story on Saffi & Staffan, and sold separately.)

How Not to be Seduced by Dukes –
Although Mary’s determined to resist the charms of the Duke of Wellesley – also England’s #1 Heartthrob – fate decides otherwise, and Mary suddenly finds herself an ordinary college student by day, and the duke’s mistress at night.

(Note: The sequel,
The Ice Around My Heart
, is sold separately.)

Derek and Jaike have always hidden the truth about themselves. But when they meet – it’s not just explosive chemistry. One look, and it’s undeniable. Even if they’re too young, they know. He’s meant to be her Master, and she’s meant to be his Sub.

Meant to Be Yours

Helios & MJ’s Story (3 parts) -
Even though he's commitment-phobic, the aloof president of a billion-dollar bike racing club finds himself jealous of the "secret crush" of a tomboyish camera-wielding first-year student.

Play With Me: A Sports Romance Series

All Lace Wyndham wants is to be an NBA coach.

All bad boy billionaire Silver March wants is HER.

It’s not a match made in heaven, but since he already had his heart stolen, Silver is willing to do whatever it takes – bribe, deceive, manipulate – to make Lace realize the inevitable: It’s his name she’ll be crying out…every night.

This Round I’m Yours

The Art of Claiming an Alpha: My Werewolf Bodyguard (Paranormal Romance)

Human-slash-pack-princess Calys is a toughie, but she still needs the help of the powerful, dominant, and gorgeous werewolf Alejandro Moretti to be an ‘alpha’. Unfortunately, he wants her body in exchange for her help.

Life isn’t easy for 18-year-old Zari. As a soul seer, she sees visions of dead people as well as those who are about to die. As a human pet, she struggles to control her feelings for her Master, the powerful, gorgeous, and mysterious vampire Alexandru, who’s in love with someone else.

My Werewolf Professor: 4-in-1 Boxed Set Out Soon

A FLING WITH THE GREEK BILLIONAIRE (STANDALONE)

Is It Over – Ronnie Milsap

All My Life – America

Almost Over You – Sheena Easton

She left him packed lunches.

The first day, he almost trampled all over it, a square plastic container with a BLT inside. He gazed at it for several moments before nudging it to the side and calling his butler’s attention to it when he reached the front door. “One of the staff might have misplaced her lunch. See to it, will you?”

He didn’t wait for an answer. With his mind already on that day’s agenda, he failed to notice the way the butler opened and closed his mouth, intending to say something else.

The second day, his driver was the one to hand him his packed lunch, which he absently accepted while talking to his solicitor in Greece. He placed it next to him in the car and promptly forgot about it.

The third day, it was his secretary who gave him his packed lunch. He took it gratefully, having been at the office for over 24 hours, monitoring a logistical nightmare involving one of his company’s hotels in Asia.

Only after he had demolished the Greek salad and ravioli that came with it did he think to ask his secretary where she had bought his lunch.

His secretary gave him an odd look. “From your cook.”

And that was the start.

Her name was Iolanthe. A nineteen-year-old self-taught cook that his housekeeper had hired to manage his kitchen, she was a dreamy little thing whose smiles brightened her face like the sun every time he came by to pick up his lunch.

The first few times, they didn’t speak to each other, Iolanthe only giving him his neatly compartmentalized lunch, stars in her eyes and heart on her sleeve. After a week, he had been the first to break the ice, dropping by the kitchen for dinner and asking her if he could eat there because the dining room was too big for one person.

It was a lie, of course. It had never been too big, but he felt like he needed an excuse to be with her.

Weeks turned into months. They were some of the best times of his life even though there was nothing between them but polite conservations over coffee. She told him about her parents’ deaths because of a botched robbery attempt, told him about the baby sister she was raising on her own. He learned they had the same taste in music and books, learned she could be quiet when he wanted her to be. He learned a lot of things about her without sharing anything about himself, and she never demanded it to change.

Soon, he found himself wanting to come home early to talk to her more, and it would have continued indefinitely, he was sure, if only Iolanthe hadn’t posted a sticky note on his door, asking him if he was free to celebrate her birthday with her and her baby sister.