Read A Flower for the Queen: A Historical Novel Online

A Flower for the Queen: A Historical Novel 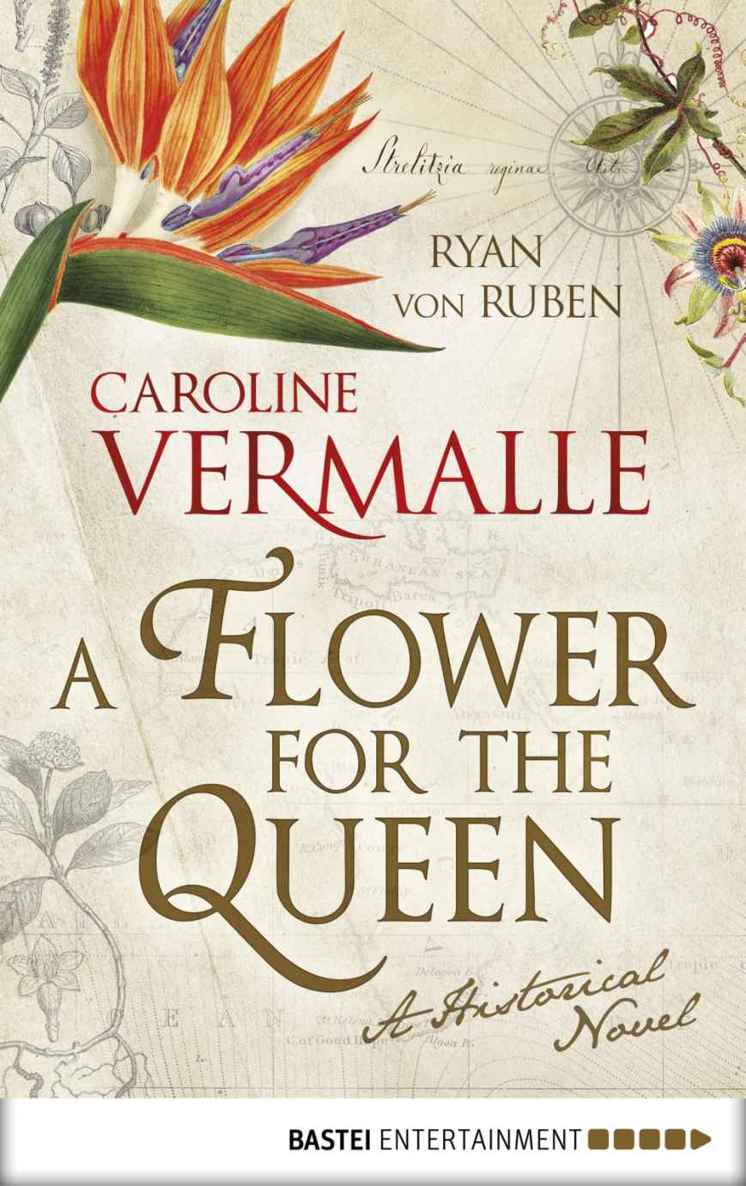 England, 1770. Young gardener Francis Masson is asked by the King to search for a rare orange blossom in South Africa. As his ship departs, Mason has no idea that he’s about to embark on the adventure of a lifetime. During his hunt for the mysterious flower, he doesn’t anticipate the untamed nature of the African continent, nor the subtle scheming of competing plant hunters. As he makes the acquaintance of eccentric botanist Carl Thunberg and his elegant accompaniment, Masson’s fate once again takes an unexpected turn …

A lively adventure novel set against the vibrant backdrop of the South African countryside.

A FLOWER
FOR THE
QUEEN

Bastei Entertainment is an imprint of Bastei Lübbe AG

“If I write one more obituary, I swear it will be the death of me,” said Jack Grant, the corners of his young, purple-lipped mouth turned downwards in a petulant frown.

The travelling coach and its team of horses rumbled and snorted in reply to the coachman’s whip, ripping a tear through the bleached silence of a November morning on the road from Montréal
to Pointe-Claire.

The coachman, sunk down in his greatcoat, watched the road for potholes and signs of ice whilst his two passengers buried themselves in their blankets and mufflers, the interior of the coach offering scant protection from the Canadian winter outside.

Jack gazed across at his father, trying to measure his mood and wondering just how far he could press his point.

“All those lives filled with accomplishment! I cannot help but feel how short my own obituary will be unless I get started on something more worthwhile. I need a column, father.”

The older man did not react and continued reading from the documents that lay on his lap, pausing only to make careful, unhurried calculations with a stub of pencil in the margins of each page.

Finally, just as Jack began to think that perhaps his father had not heard, George Grant removed his spectacles, pinched the bridge of his nose and looked across at his son. He found it remarkable how little they resembled each other. George was short, stocky and as thick through the chest as he was broad across the shoulders. The parts of his face that were visible above an expansive but neatly trimmed beard looked to have been pounded and hammered into place on life’s forge. Jack, by contrast, was tall and thin and had a face that could have been cut from the most delicate crystal, as yet untarnished by even a hint of worry or facial hair. Whilst his father could occupy a space in almost complete stillness, Jack was constantly fidgeting, checking his lapel or straightening a cuff. As he examined his son, George couldn’t help but observe that everything about his son crackled with impatience.

“We have been through this before, Jack,” said George, “You need to experience the world before you can judge it. One has to crawl before one can—”

“But what experience is there to be gained by listing out the deeds of the dead? I need something that I can get my teeth into, something serious!” interrupted Jack.

“—walk,” continued George in a weary tone, ignoring the interruption. “Besides, there are not many things more serious than providing fitting epitaphs to those who have passed. It is fine, meaningful work, Jack.”

“Meaningful?” Jack almost choked on the word, “Day after day I reduce entire lives to a few lines, most of which nobody will even bother to read. Where’s the meaning in that? But with a column I would be free to give all those heroic acts the space and consideration they deserve.”

“Life is about more than great acts and heroic deeds, Jack.” A sudden jolt brought an end to the war of words between father and son and lifted both men out of their seats. Boxes of oranges and luggage stowed in the racks above fell about and onto them.

“What was that?” asked Jack, shaken.

George Grant rapped on the roof of the carriage, interrupting a string of muffled curses coming from the coachman’s seat, “Smithers!”

The coachman heaved on the reins and brought the team to a stop before jumping down from his seat. “A man on the road, sir. He threw himself in front of the horses, he did!”

“There!” cried Jack, turning in his seat to point out the rear window. A few yards back, at the side of the road, a phantom silhouette staggered and then fell from view, erased by the mist.

“Are the horses all right?” asked George Grant.

“Right enough to get us home, sir.”

“Well, then. Let’s get going. We’re already tardy, and Mrs Grant won’t be best pleased as it is.”

“Are we not going to help him?” protested Jack.

“Don’t be foolish, Jack. For all we know, he could be a highwayman. Besides, the weather is getting worse.” George Grant took a last look back into the mist before pronouncing his final words on the matter. “Let’s go.”

But before the coachman could release the brake, Jack had wrenched open the door and was clambering down onto the icy sludge.

“Highwaymen don’t throw themselves under horses. He’s clearly lost, more than likely injured, and now you’re going to condemn him to death!” He looked defiantly up at his father and then turned and marched back up the road to where the figure had vanished.

The two men left behind watched as Jack headed off into the mist and snow. “The ice storm will be fast upon us, sir,” Smithers said flatly. Without speaking, George looked up at the sky before letting out a heavy sigh and then freed the rifle from its mounting at the back of the carriage and climbed down onto the snow.

Jack had left the road and was trudging through knee-high snow, the hem of his greatcoat already sodden and dragging along behind him. He cried out with all the authority his nineteen years could muster:

But the phantom had disappeared, swallowed by the cold and mist. The whinnying of the horses, impatient now that they had a nose for home, carried across the snow. It was the only sound to be heard above the rising hum of the north-east wind. Jack paused briefly to catch his breath and then continued on a ways down the side of the road, his enthusiasm waning with each crunching footfall. Suddenly, he halted.

George came up alongside and cast his eyes over what had given Jack cause to stop: drops of blood scattered across the snow.

George nodded to Jack, urging him on. Faced with real evidence of the stranger and with his own blood now cooled by the rising wind, Jack’s confident bluster had given way to fear and uncertainty. He hesitated.

George set his jaw in silent disapproval as he pushed past his son, following after the red and grey footsteps that led further from the road and into the tree line.

As they plunged on, all manner of strange objects began to appear, littering the snow: hessian bags, kid-leather pouches, wooden boxes of all sizes, scissors, a small spade and what looked to be a miniature spyglass fixed to some sort of brass contraption. Strangest of all was a rusty birdcage containing bright yellow flowers, each with four tendril-like petals.

The hum of the wind dropped for a moment and in its place a shallow rasping sound could be heard coming from a depression a few feet away. George Grant cocked his rifle, allowing the sound to carry before moving on. And then they saw him.

In a shallow ditch lay an old man. His cloak and dress suggested some degree of wealth, but even though they were wet with snow and blood, it was clear that their sheen was long gone. The elbows of his coat were patched and the wooden heels of his boots worn away. His breath escaped in short, wispy bursts.

“Sir, are you all right?” asked George, scanning the surrounds before looking back to the old man.

But save for the painful rasp of his breathing, the old man made no other sound. His fingertips, white with the onset of frostbite, were clasped around several worn, leather-bound journals held together by a strap secured with a lockable clasp.

“We should ride for help –”

“He doesn’t have that long.” This time Jack did not protest at being contradicted. “Here,” George said, taking charge, “take the rifle, and bring his things.” George lifted the old man over his shoulder with ease and made his way back to the carriage. Jack followed behind, gathering up the stranger’s possessions along the way.

“Smithers!” cried George as they neared the coach.

The coachman, barely hearing his name above the now gusting wind, engaged the break of the coach before jumping down to open the carriage door.

Once the old man was laid down across Jack’s seat, George removed the wet and blood-stained cloak and wrapped him in one of the blankets. With the old man installed, Jack then struggled onto the coach.

As pellets of frozen rain began to pelt the roof, the coach lurched forward and then gathered speed, the sound of the whip inaudible above the wind that now drove them towards home.

At two storeys, the Grant house was large but not overbearing. With its shingle roof, whitewashed clapboard exterior and white-painted window frames, it was a decent if unexceptional example of the Georgian style that was favoured by the wealthy traders and merchants who chose to live in the rural surrounds of Montréal.

Inside, fires crackled in all the rooms. The warm tones of polished wooden tables, oak floorboards, flock wallpapers and upholstered chairs could not have been more different from the frozen, monochromatic landscape outside its windows.

Servants rushed with measured haste, sweeping, dusting and arranging anything that was not fixed down. At the centre of the bustle, Mary Grant moved like the eye of the storm, leaving not chaos and destruction in her wake, but order and a healthy dose of “just so”.

She was dressed in a midnight-blue housedress, her dark hair held in place under a starched bonnet that sheltered features that had once been fine and delicate, but which were now weathered by the long Canadian winters. If the youthful beauty that had encouraged so many eyes to look upon her had been lost, it had been subtly replaced by a forceful personality that was no less commanding.

“This storm had better not last much longer, or else our guests will be forced to stay at home,” she declared to no one in particular. Mary glanced out of the dining-room window while she carefully rolled out the antique lace runner. Then, turning to her son, she said, “Not the right time to play good Samaritan, Jack. Not the right time at all.”

“When is the right time then, Mother?” asked Jack, amused, as he stood warming himself by the fire.

“Anytime but the annual Parish Ladies Committee dinner!” countered Mary before looking back to her table and inspecting the shine on the silver..