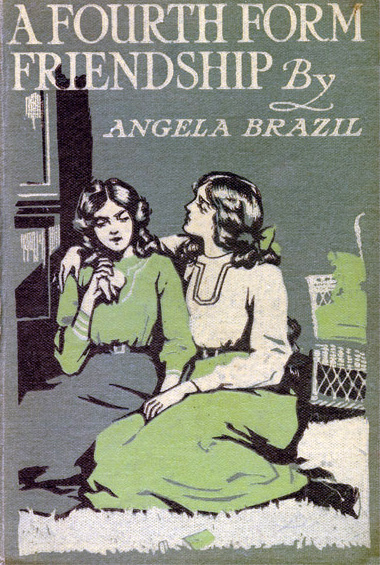 The Project Gutenberg EBook of A Fourth Form Friendship, by Angela Brazil This eBook is for the use of anyone anywhere at no cost and with almost no restrictions whatsoever. You may copy it, give it away or re-use it under the terms of the Project Gutenberg License included with this eBook or online at www.gutenberg.org

*** START OF THIS PROJECT GUTENBERG EBOOK A FOURTH FORM FRIENDSHIP ***

Produced by Suzanne Shell and the Online Distributed Proofreading Team at http://www.pgdp.net

"Angela Brazil has proved her undoubted talent for writing a story of schoolgirls for other schoolgirls to read."--=Bookman.=

=The Madcap of the School.= "A capital school story, full of incident and fun, and ending with a mystery."--=Spectator.=

=The Luckiest Girl in the School.= "A thoroughly good girls' school story."--=Truth.=

=The Jolliest Term on Record.= "A capital story for girls."--=Record.=

=The Girls of St. Cyprian's=: A Tale of School Life. "St. Cyprian's is a remarkably real school, and Mildred Lancaster is a delightful girl."--=Saturday Review.=

=The Youngest Girl in the Fifth=: A School Story. "A very brightly-written story of schoolgirl character."--=Daily Mail.=

=The New Girl at St. Chad's=: A Story of School Life. "The story is one to attract every lassie of good taste."--=Globe.=

=For the Sake of the School.= "Schoolgirls will do well to try to secure a copy of this delightful story, with which they will be charmed."--=Schoolmaster.=

=The School by the Sea.= "One always looks for works of merit from the pen of Miss Angela Brazil. This book is no exception."--=School Guardian.=

=The Leader of the Lower School=: A Tale of School Life. "Juniors will sympathize with the Lower School at Briarcroft, and rejoice when the new-comer wages her successful battle."--=Times.=

=A Pair of Schoolgirls=: A Story of School-days. "The story is so realistic that it should appeal to all girls."--=Outlook.=

=A Fourth Form Friendship=: A School Story. "No girl could fail to be interested in this book."--=Educational News.=

=The Manor House School.= "One of the best stories for girls we have seen for a long time."--=Literary World.=

=The Nicest Girl in the School.=

=The Third Class at Miss Kaye's=: A School Story.

=The Fortunes of Philippa=: A School Story.

Author of "The New Girl at St. Chad's" "The Manor House School" "The Nicest Girl in the School" &c.

"WITH A SHRIEK SHE DREW SWIFTLY BACK" 65

"Two pencils, an india-rubber, a penknife, camp stool, easel, paint-box, a tube of Chinese white, a piece of sponge, paint rag, and water tin," said Aldred Laurence, checking each item off on her fingers. "Let me see! Can I possibly want anything else? It's so extremely aggravating to get to a place and find you've left at home what you most particularly need. My block, of course! How could I be so stupid as to forget it? It's no good taking pencils and paints if I've nothing to draw upon!"

"Hello, Aldred! What a spread!" exclaimed Keith, rousing himself from the luxuries of a comfortable chair and an absorbing book to notice that his sister had put on her hat, that her gloves lay on a chair, and that she was already beginning to pack some of the articles in question inside a home-made portfolio of dark-green American cloth. "The table looks like an art repository!" he continued. "Have you suddenly turned into a Rubens, or a Raphael? Where are you going with all those traps?"

Aldred paused to count her paint brushes, fitted the spare tube of Chinese white into a vacant corner of her paint-box, and slipped the penknife into her pocket.

"I want to make a sketch of old Mrs. Barker's cottage," she replied. "The clematis is out over the porch, and it looks lovely. I heard Mr. Bowden say yesterday that it was a splendid subject. Don't you remember, he made a picture of it last year?"

"So he did, and a jolly good one too. Yours won't be anything like up to that, Sis!"

"I dare say not, but you needn't discourage me from trying, at any rate."

"Oh, I'm not discouraging you. Go by all means, and good luck to your efforts! You can show me the masterpiece when you come back;" and the boy, flinging his legs over one arm of the chair, settled himself in an even more inelegant and reposeful attitude than before, and plunged again into the fascinating adventures of Captain Kettle.

That, however, did not at all content his sister.

"I thought you were coming with me," she said reproachfully. "I was counting upon you to hold my water tin while I painted."

Keith detached his mind from tropical Africa with an effort.

"Then you counted without your host, my dear girl!" he responded. "I'm extremely comfortable here, and I assure you I haven't the smallest intention of pounding half a mile down the dusty road, on a baking afternoon, to look at a picturesque cottage and act water-carrier when I get there!"

"The tin upsets when I hold it on my paint-box," said Aldred, in a rather aggrieved voice, "and if I put it on the ground I have to stoop every time I want to dip my brush."

"Then make a hole in each side, tie a piece of string across, and hang it on the peg of your easel. I'll fix it up for you in half a second, if you'll find me the hammer and a nail. Girls have no invention! The thing's as simple as possible. I wonder you couldn't think of it for yourself. Where's a piece of string? Now, isn't this A1? Put it inside your case. There! Off you go!"

Aldred could not but acknowledge the improvement in her painting tin, but she seemed, nevertheless, in no hurry to start. She re-arranged her paints, took off her hat and put it on again, and loitered about in so marked a manner that her brother could not fail to notice her hesitation.

"What's the matter now?" he enquired.

"You know quite well I can't go alone."

"Because Father said I mustn't sit sketching by myself."

"That's a horse of another colour. In that case, why did Aunt Bertha let you get ready?"

"I thought it would be all right if you went too."

"We need only walk for five minutes along the road, and then turn into the path through the wood," suggested Aldred. "There's a field of cut corn in front of the cottage; you could sit on the corn and read if you like."

"Not half so cool as here."

"Oh, Keith, you might be nice when it's holidays!" pleaded Aldred. "It's the only time I ever have anybody to go about with. I'm sure I do heaps of things for you; I was playing cricket with you all morning, wasn't I?"

"Yes, and a precious butterfingers you were, too. There, then, you needn't look so blue! I'll go, but on the one condition that you let me read in peace and quiet, and don't bother."

"I won't say a single word, if you don't want to talk. I'll be absolutely dumb and mum!"

"Well, I hardly believe you'll be able to hold your tongue to that extent. I'll allow you an occasional remark, but you mustn't keep up a continual flow of conversation. Where's my straw hat?--it's too hot for a cap. I think I'm an absolute saint to turn out on such a blazing afternoon!"

Having gained her point, Aldred ran readily enough to fetch her brother's hat, and set off with him down the drive in a state of beaming satisfaction.

Dingfield, the place where they lived, though only an hour's distance from London, was sufficiently in the country to afford a pleasant prospect of trees, meadows, and winding reaches of river. The hedgerows were thick with twining bryony and feathery traveller's joy; here and there the hips were reddening, and a ripe blackberry or two tempted them to linger upon the way. It was cooler than Keith had anticipated, for a fresh breeze was blowing from the Surrey Hills, sending white clouds in long streamers across the blue of the sky, and shaking down a few windfalls from the apple trees that overhung Farmer Walton's gate.

The two soon left the high road, and, after strolling leisurely through the welcome shade of the wood, climbed over a stile into a pasture, and after another five minutes' walking found themselves in a stubble field, within sight of the river. Here was the subject upon which Aldred had determined to try her brush. It was a picturesque old cottage, with red-tiled roof, lattice windows, a porch wreathed in purple clematis, and a garden gay with dahlias, looking attractive enough in the September sunshine to make even an amateur wish to commit its beauties to paper.

Aldred chose her point of view with great deliberation, and considerable taste for a girl of only fourteen. She fixed her easel where a couple of elders would make a background for the red roof, and where she could catch a pleasant angle of the gable window and a peep of the distance beyond. Having unpacked her portfolio, she settled herself on her camp stool and began to put in her sketch with rapid lines, working, indeed, more quickly than correctly, but nevertheless obtaining rather a good effect. Keith, finding a pile of corn stooks conveniently near, flung himself down in the shade, and, with a fern leaf to flip away flies, lay with half-closed eyes watching his sister's energetic pencil.

"Then don't look! I thought you wanted to read? You made me promise not to open my lips, and I haven't spoken a word since we came."

"Most heroic self-denial on your part, I'm sure! I believe I'm too lazy even to read. I like to lounge in the holidays, especially when it's getting so near the end."

"Only a week now to the fourteenth," said Aldred.

"And I am counting the days. I want the time to come so much!"

"It's a case of 'where ignorance is bliss', my dear girl. You've never been to school before; I have! You won't find yourself in such an anxious hurry to start off by next September, if I'm anything of a true prophet."

"I expect I shall. All the stories I've read about school sound delightful--the girls have such fun. I'm looking forward to going most immensely. It will be far nicer than having a governess at home. It's so fearfully slow while you're away at Stavebury. Aunt Bertha grows more prim and particular every day, and I never seem able to do a single thing right; it's scold and lecture, lecture and scold, from morning till night! As for Miss Perkins, I was sick of the very sight of her! You can't imagine how glad I was when she took her final departure. I said good-bye as nicely as I could, for decency's sake, and then rushed into the empty schoolroom and danced a jig and clapped my hands for joy, to think I need never do lessons with her there again."