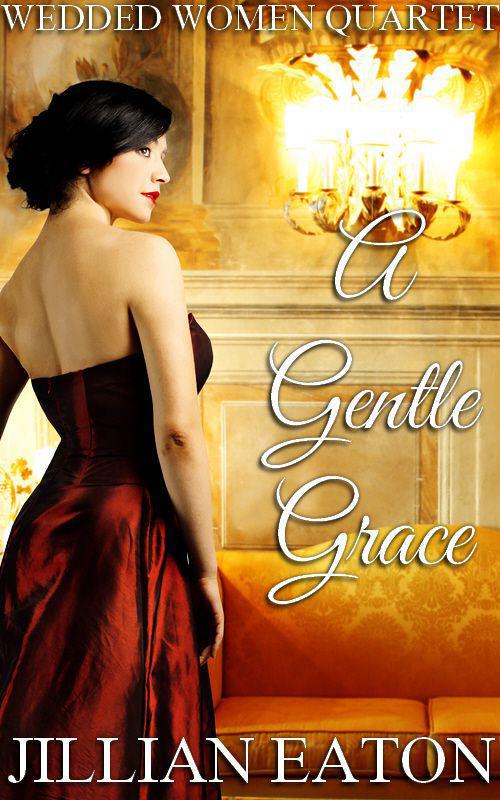 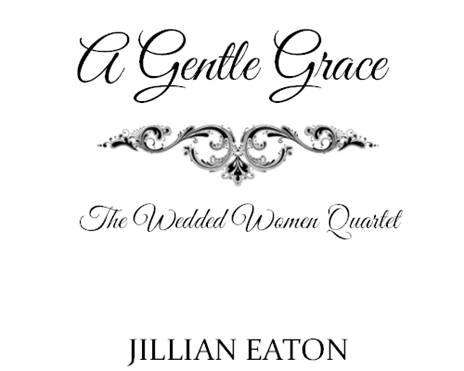 A Gentle Grace
is a work of fiction

All of the characters, organizations, and

events portrayed in this novel are either products

of the author’s imagination or are used fictitiously.

Except for use in any review, the

reproduction or utilization of this work in whole

or in part in any form is strictly forbidden.

Other Titles by Jillian Eaton

Praise for the Wedded Women Quartet

“I thought [A BROODING BEAUTY] had a wonderful blend of story, heat, and love." (Lisa, Rogues Under the Covers)

“[A RAVISHING REDHEAD] is my first book from this author and it won't be the last. Once I got started reading I couldn't put it down." (Laurie, Bitten by Paranormal Romance)

“…I recommend this series to anyone who enjoys cute love stories and who wants a darn good read." (Jessica W, Goodreads)

For my girlfriends who brought

the ice cream. You made 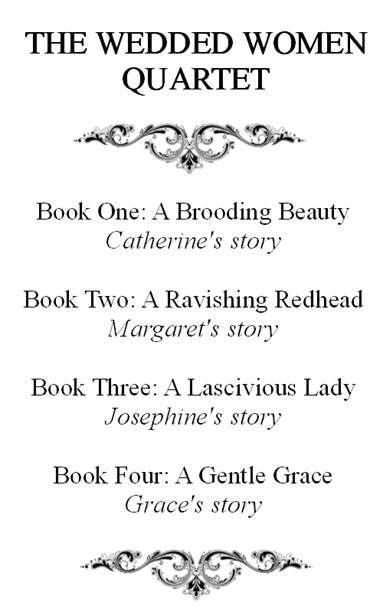 “Burn it,” Josephine said with conviction.

“Lock it away in a box,” Margaret suggested.

“Give it to me,” Catherine said kindly.

Wordlessly Grace looked up from the letter she clutched in her hands to the three women who hovered over her wearing varying expressions of concern. She managed a small smile, but it fell far short of her dark blue eyes and felt unnaturally heavy on her lips.

Her mouth had become more accustomed to frowns than smiles as of late, and the tiny muscles screamed in protest when she tried to pull them upwards. Giving up, she let her lips fall flat, and tried her best to ignore the quick glance exchanged between Margaret and Catherine.

“I do not know what to do,” she confessed in a whisper, lifting the letter from her lap to press it tightly against her chest. The parchment crinkled, but she paid it no mind. The letter could be torn in a thousand, nay, a
hundred
thousand pieces and she would still be able to recite every last word.

Without warning Josephine reached forward and plucked the letter from her grasp. Crossing the parlor in three quick strides the fair haired, violet eyed beauty held it dangerously close to the flames that licked out from the hearth. “Burn it,” she repeated, her mouth settling into a mulish frown. “It has been nigh on three months without a single word. He is not coming back, Grace, and you would do well to erase him from your thoughts completely. Starting,” – her hand inched closer to the fire – “with this damned letter!”

“Josephine,” Grace gasped, scrambling to her feet. The toe of her boot caught on the edge of the Persian rug that was stretched across the oak floorboards and she went flying forward, arms wind milling helplessly in the air. With a cluck of their tongues Margaret and Catherine caught her simultaneously, each grasping an arm and hauling her upright in a move well conditioned by practice.

“There, there,” Catherine soothed, patting Grace’s shoulder. “Josephine is not going to burn your letter, dear. Isn’t that right, Josephine?” Easily the sternest of the four women, Catherine’s startling sapphire eyes brooked no nonsense as she glared daggers at her friend.

With a reluctant sigh Josephine pulled the letter back from the fire and returned it to Grace. “Here,” she said grudgingly. “Although you really should stop reading it. Bury it in the ground and be done with it. Be done with
him
. He truly is gone, my dear. And no matter how many times you read that blasted letter he is not coming back.”

“Most definitely not,” Margaret agreed. Releasing Grace’s arm, she flounced around to the side and collapsed backwards into a velvet upholstered loveseat. Her left hand ran absently along the armrest and light from the fire reflected off her wedding ring, highlighting the emerald that complimented her riotous mane of bright red curls. “He was a rascal and a rake,” she continued, lifting one eyebrow, “and you are well done to be rid of him. All things considered,
he
did
you
the favor by disappearing.”

Clasping her hands behind her back, Grace drew in a deep breath and finally managed what felt like the first genuine smile in weeks as she faced her three closest friends. Since they had attended the same finishing school, Catherine, Margaret, Josephine, and Grace had become sisters in everyway save blood. They had seen each other through fiancés, weddings, second weddings, babies, and – her smile fell away – unspeakable heartbreak.

“I just want to know if he is all right,” she said softly, dropping her gaze. As it always did when she thought of Stephen her stomach did a slow, slippery role and she automatically swallowed back the lump that formed in her throat. Tears pricked the corners of her eyes and she rubbed them briskly away while the ladies pretended not to notice. They loved her – something they had told her a hundred, nay, a
thousand
times over – but they simply could not understand why she still loved Stephen. To them he was a horrible man who had broken their dear friend’s heart. But to her… Oh, to her he was the man she had dreamed of spending the rest of her life with.

Three months had passed since Stephen unceremoniously broke off their engagement in the letter she held clutched so tightly in her hands. Three months of wishing and hoping, of wondering and waiting. For the first four weeks she had sat all but unmoving in the loveseat that Margaret now occupied, convinced that at any moment Stephen would come calling and everything would be explained away. He had gone to visit a sick relative. He was a spy for the King. Anything –
anything
– would be better than her deepest, darkest fear. Her fear that he simply did not love her, did not want her, and leaving her was as easy for him as putting a quill to parchment.

“Naturally you want to know how he is faring, because you are a good and kind hearted person,” Catherine said loyally as she walked to a small table in the corner of the room and poured herself some tea. Raising the blue and white porcelain cup to her lips, she took a small sip. “But you must begin to look to the future, dear. With the Season starting next week—”

“Oh hang the bloody Season,” Josephine interrupted. Circling around the loveseat in a flurry of yellow skirts, she perched on the armrest beside Margaret. “All the men who will be in attendance are either randy young bucks or old enough to be Grace’s grandfather.”

“Not
all
of them,” Catherine said. “And how else is she supposed to find a husband?”

“Why does she need a husband?” Tucking a lock of hair behind her ear, Josephine raised her voice over Catherine’s sputter of indignation and turned her head to speak directly to Grace. “You do not
need
a husband, dear. No woman does. It is a myth perpetuated by men to trap us into loveless marriages.”

“
You
have a husband,” Margaret chimed in.

“Do not remind me,” Josephine said with a dramatic sigh. There was no mistaking the fond curve of her lips, however, nor the sparkle that lit up her eyes at the mere mention of her beloved Traverson. Having recently reconciled after a period of time spent apart, the two were nearly inseparable. He was in Paris at the moment, attending some “dreadfully boring bug lecture” as Josephine so eloquently put it, and as a result she had been staying with Grace and her family since his departure. Margaret and Catherine had arrived in London just yesterday, their own husbands in tow, and would be remaining for the duration of the Season.

Observing the sheer happiness that radiated from her friend, Grace could not help but feel a pang of jealousy. Had Stephen not left her
she
would look as Josephine did now: blissfully happy without a single care in the world. Instead, every smile was forced. Every laugh strained. Some mornings it was even difficult to get out of bed knowing that she would have to face the day without Stephen in it. Knowing that she would not hear his husky voice against her ear, or have his arm curve around her waist, or feel his lips—

“Grace, are you listening? Grace? Grace!”

Blinking slowly, Grace flushed as she realized all three women were staring at her. Pressing a cooling hand to her burning cheeks, she struggled to push any wayward thoughts of Stephen aside and focus on the matter at hand. Whatever it happened to be. “I… Yes? What is it?”

Studying her closely, Catherine slowly repeated her question. “I asked if you were planning on attending the Markham’s ball tomorrow eve.”

“Well I am certainly not planning on attending.” Josephine sniffed and the layers of crinoline beneath her dress rustled loudly as she crossed her ankles. “The last time I attended one of her soirees she had the gall to accuse me of flirting with her husband—”

“You
were
flirting with her husband,” Margaret reminded her.

With the gritty resolve of a mother separating two sparring children, Catherine clapped her hands to draw the attention back to herself. “Josephine, you
were
flirting with Lord Markham, in addition to every other man in attendance. Margaret, do
not
antagonize her. Honestly, you two. My daughters have better manners! Now, Grace… Are you, or are you not planning on going to the ball?”

“I am,” Grace said with great reluctance. She was not happy about it – would rather walk off a cliff into a pit of snakes, to be quite honest – but her sister Rosalind, who had recently celebrated her sixteenth birthday, would be making her debut at the ball and Grace was to be her chaperone. There was nothing quite like watching after your younger, more beautiful sister to let you know you were firmly ‘on the shelf’. At least it would give her an excuse to play the wallflower and decline dances… not that she expected any offers for her card to be made. Grace’s very name was synonymous with clumsiness, particularly when any type of physical coordination was required.

Daughters of the Nile by Stephanie Dray
Forbidden Surrender by Carole Mortimer
Helsreach by Aaron Dembski-Bowden
Hunting in Harlem by Mat Johnson
The Cats that Stole a Million (The Cats that . . . Cozy Mystery Book 7) by Karen Anne Golden
The Firefighter and the Girl From the Coffee Shop by Terry Towers
Hearts and Crowns by Anna Markland
Firelight at Mustang Ridge by Jesse Hayworth
The Selected Stories of Mavis Gallant by Mavis Gallant
There's Something I've Been Dying to Tell You by Lynda Bellingham